Disneyland Resort has released a reopening proposal including reopening dates.

If the proposal is approved by state and local governments, the reopening will kick-off with Downtown Disney beginning on July 9th, followed by Disneyland Park and Disney California Adventure on July 17th. Disney’s Grand Californian Hotel & Spa and Disney’s Paradise Pier Hotel will welcome back guests on July 23rd, while Disneyland Hotel will initially remain closed.

In response to the news, Anaheim Mayor Harry Sidhu has expressed his thoughts! In a statement released on Twitter, Mayor Sidhu said, “We could see the reopening of Disneyland 65 years to the day from when Walt Disney opened his first theme park in our city. This is a major milestone in the recovery of Anaheim, California and our nation. We know Disney will be able to meet the challenge of reopening safely, and Anaheim stands ready to see that happen.” 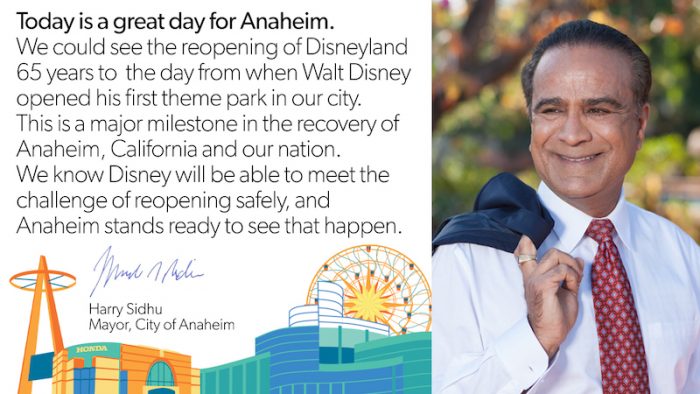 We will continue to keep an eye out for official approval of Disneyland’s reopening proposal from the state and local governments.

Click here to learn more about the proposed reopening dates for Disneyland Resort!

Do you plan to visit Disneyland when it reopens? Let us know in the comments!