You know that we’re total foodies (it’s in our name)! So, that’s why the 2021 EPCOT Food & Wine Festival has already been a blast for us as we make our way around the World Showcase! 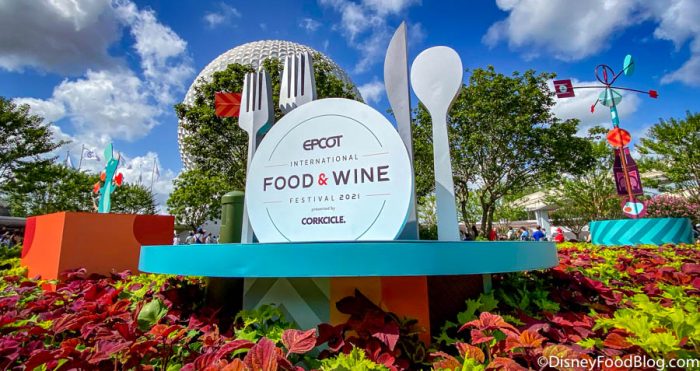 We’ve already done a LOT today as we’ve visited the Canada, Hawai’i, and Mexico Booths. But, there are still more food booths to visit, and we’re bringing you with us along the way!

There are SO many new items at EPCOT’s Japan booth that we are just going to dive right on into our review! (Yes, that means we’re hungry look at all the eats available to guests!)

Japan is always a highlight of the Festival for us!

We’ve tried some truly unique dishes here in the past, like that Frothy Ramen at last year’s Food and Wine Festival. 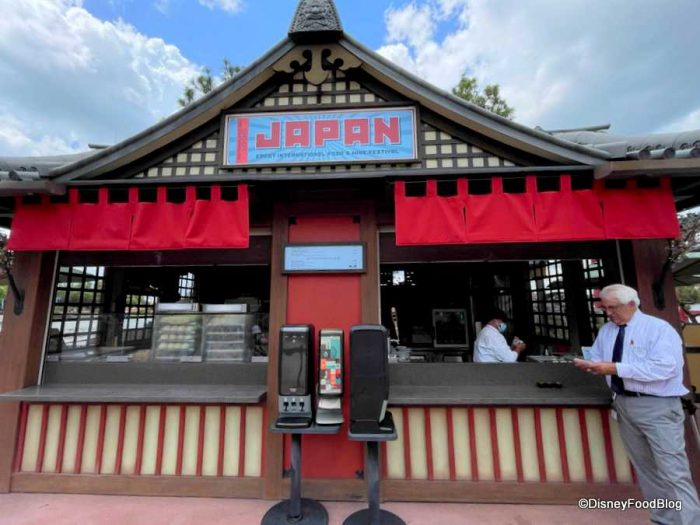 While you won’t find any Frothy Ramen on the menu this year, you WILL find a variety of brand-new festival items to eat and drink. 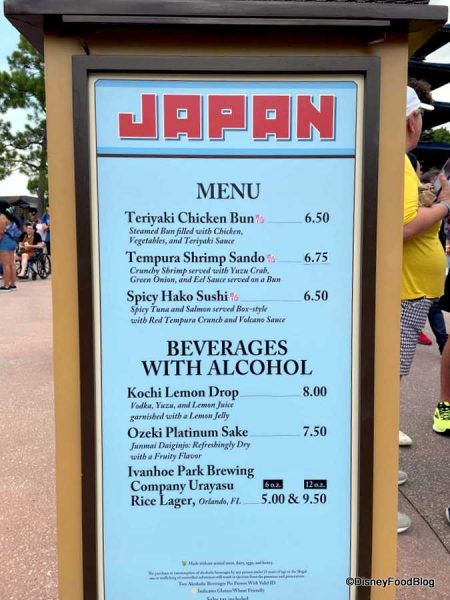 Let’s waste no time and dive right in!

The only returning item on the Japan booth’s menu this year is the Teriyaki Chicken Bun, which is a Steamed Bun filled with Chicken, Vegetables, and Teriyaki Sauce. 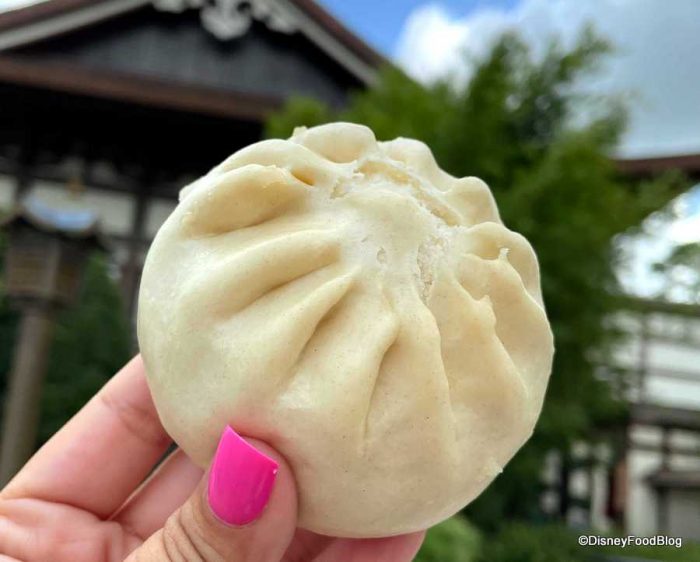 Don’t worry — there was plenty of stock for everyone who wants a Teriyaki Chicken Bun!

So many delicious Teriyaki Chicken Buns from Japan! 🥟 pic.twitter.com/xvvg7M3zx7

This bun was delicious! The Teriyaki Chicken itself was sweet, but we didn’t have as much of it inside the bun as we thought there would be — the bun itself is pretty rich and carb heavy, however, so it was filling nonetheless!

Breaking into the Teriyaki Chicken Bun from Japan! #TasteEPCOT pic.twitter.com/nChPLd1N1l

This could be a big hit with any kids you bring to the festival this year. 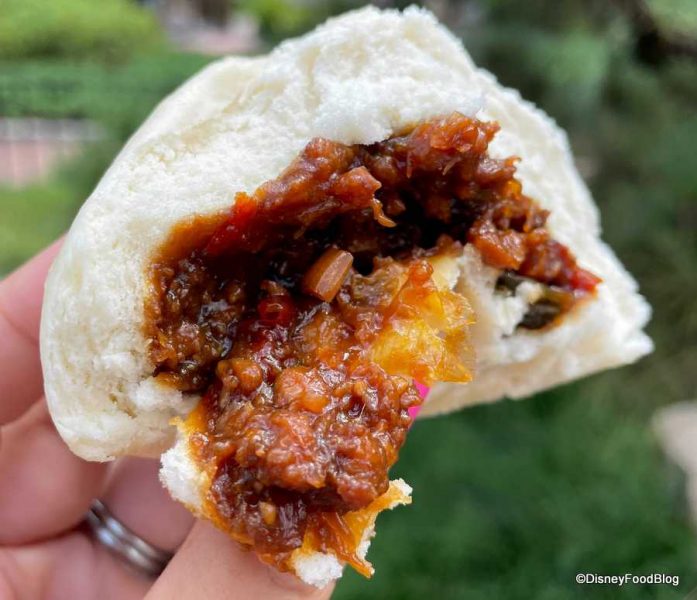 We’re glad to see it return this year for $6.50! But, we know you’re here for all the details about the NEW items! (Why wouldn’t you be?) First up, we tried the Tempura Shrimp Sando that comes with Crunchy Shrimp served with Yuzu Crab, Green Onions, and Eel Sauce served on a Bun. 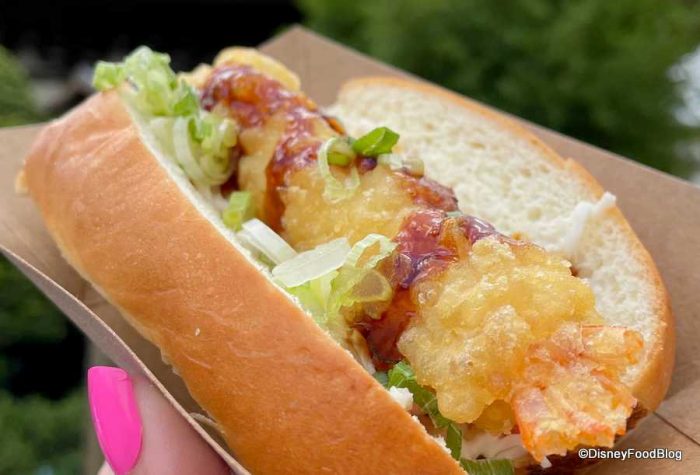 We get it…it looks like a shrimp hot dog, but this is a really fun dish! We picked up on some citrus-y flavors, with the crab coming in more as an aftertaste.

We loved the eel sauce on top, too, with the the green onions creating a little bit of a slaw underneath the shrimp! It’s definitely one of the more unique dishes in the festival, which is totally fitting for Japan! 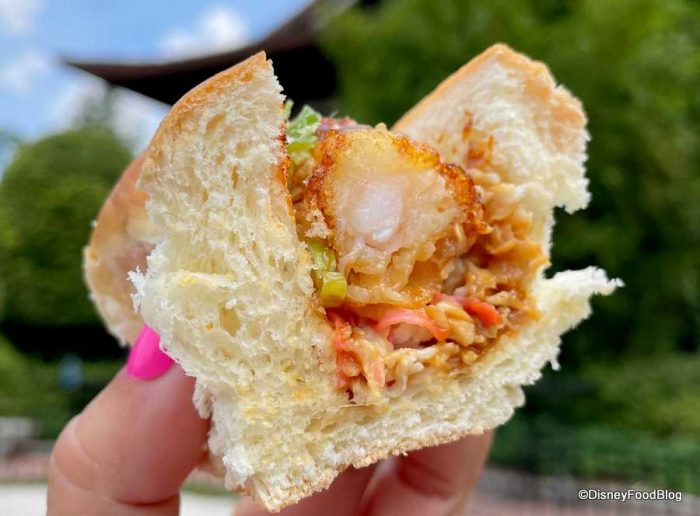 If you’re curious, the Tempura Shrimp Sando is available for $6.75. Finally, you can snack on the Spicy Hako Sushi that’s wrapped up with Spicy Tuna and Salmon served Box-style with Red Tempura Crunch and Volcano Sauce. 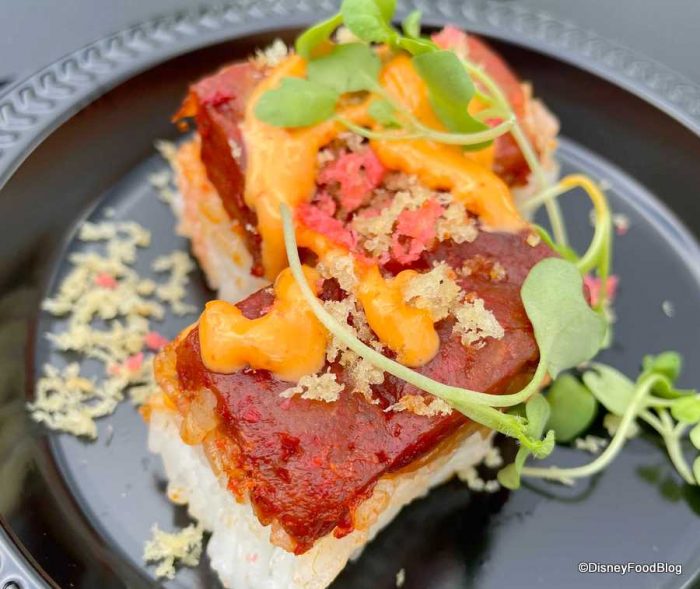 The Sushi is very, very yummy and we’re a big fan!

It’s got a little kick to it which we really enjoyed, but if you aren’t a sushi lover then clearly this won’t be the dish for you.

Each one of the sips on the menu at the Japan booth this year are NEW, which has had us so hyped to head that way all day.

First, you could opt for the Kochi Lemon Drop mixed with Vodka, Yuzu, and Lemon Juice and garnished with a Lemon Jelly, available for $8.00. This drink tastes just like lemon and Yuzu. You really can’t taste the vodka at all. That could be great if you don’t like a strong taste of alcohol in your drinks, but it could also be dangerous because you could easily drink this quickly and totally forget it has alcohol in it! So just keep that in mind. 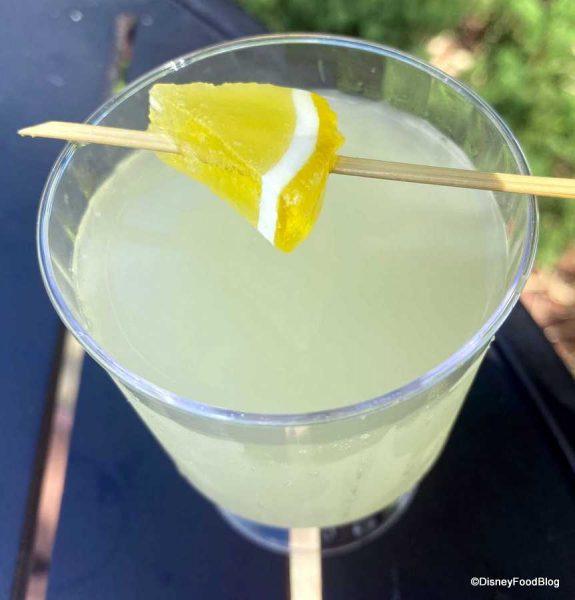 If you’re looking for something different, you could grab Ozeki Platinum Sake: Junmai Daiginjo for $7.50. This drink is very floral and refreshing! 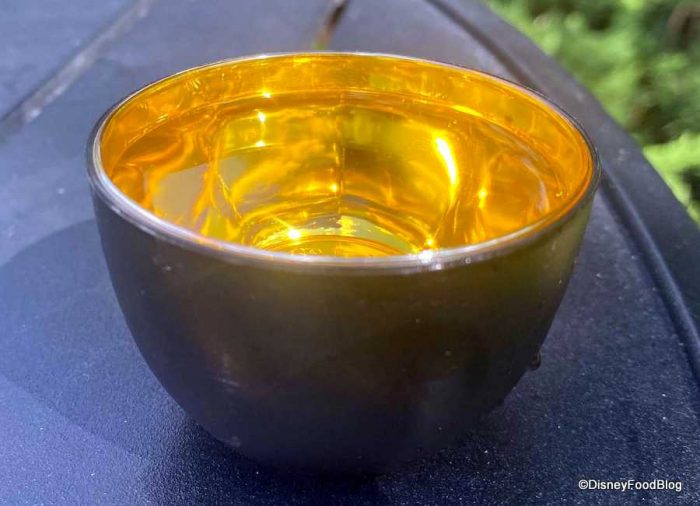 And, last (but certainly not least), the Ivanhoe Park Brewing Company Urayasu Rice Lager, Orlando, FL is also available on the menu. 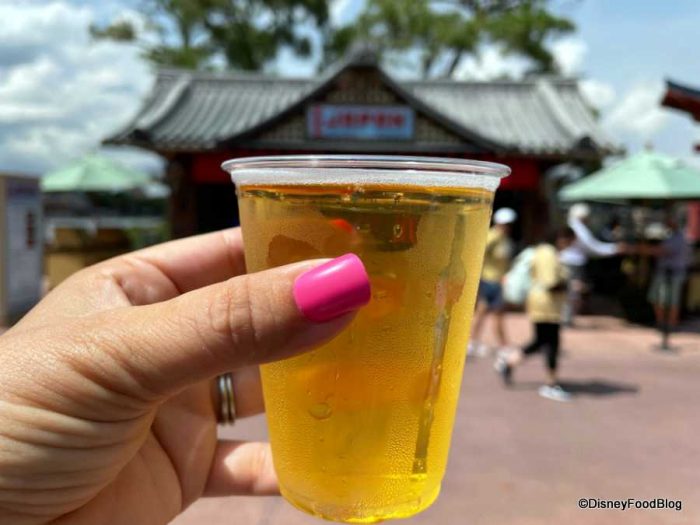 We’ve tried several beers at the festival today, and this one might actually rank closer to the BOTTOM of our beer list for the Food and Wine Festival. It was okay, but nothing special. We found it to be oddly dry in a sort of bizarre way, and it wasn’t as refreshing as some of the other beers we had today (like the Collective Arts Audio/Visual Lager at the Canada Booth!). 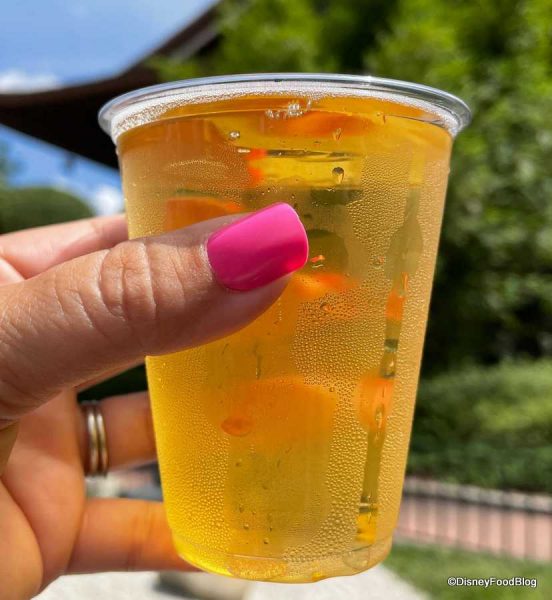 If you’re feeling a little more adventurous on your trip around the Food and Wine Festival, definitely make it a point to visit the Japan Booth! If you’re traveling with more picky eaters, there’s always those tasty and crowd-pleasing Chicken Teriyaki Buns. This was one of the more popular booths we experienced today with longer wait times, so pack your patience before hopping in line! 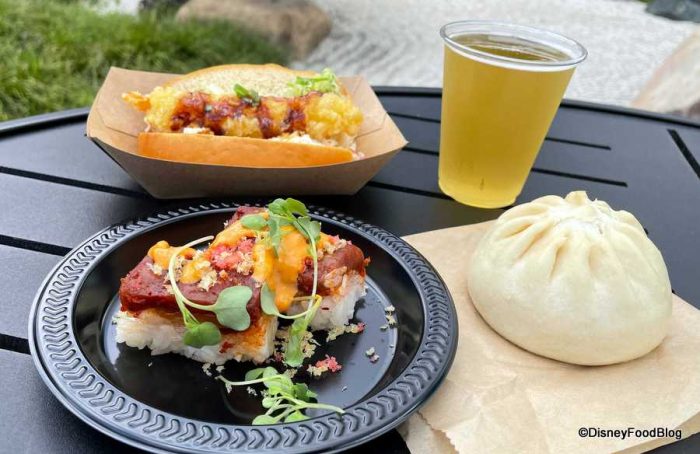 And, you can stay tuned with us throughout the day as we try eats, treats, and drinks from the other booths available at this year’s EPCOT Food & Wine Festival!

Click here to check out all of the menus from this year’s Food and Wine Festival!

What’s your favorite booth at this year’s Food & Wine Festival? Let us know in the comments below!

« PHOTOS: ALL of the 2021 EPCOT Food and Wine Festival Merchandise!
Review: Should You Wait in a LONG Line for the China Booth at EPCOT’s Food & Wine Festival? »