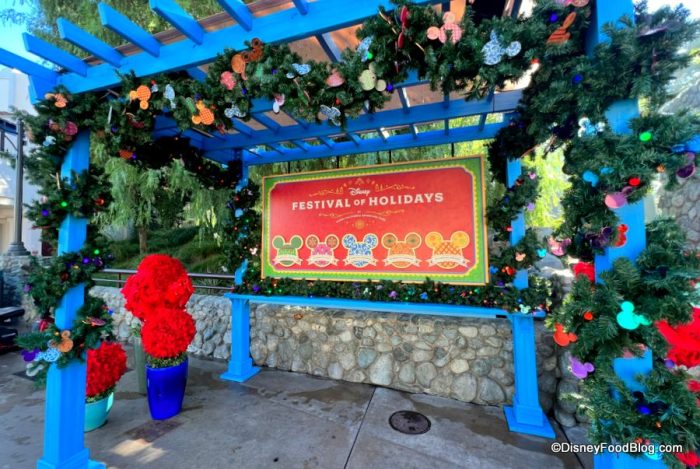 Festival of Holidays has begun!

Today marks the beginning of the Festival of the Holidays in Disney California Adventure and we’ve been taking you along with us as we try ALL of the new and returning eats and drinks! We’re headed to a booth with one of our favorite holiday puns of all time — Winter Sliderland!

An entire booth dedicated to sliders? Sign us up! 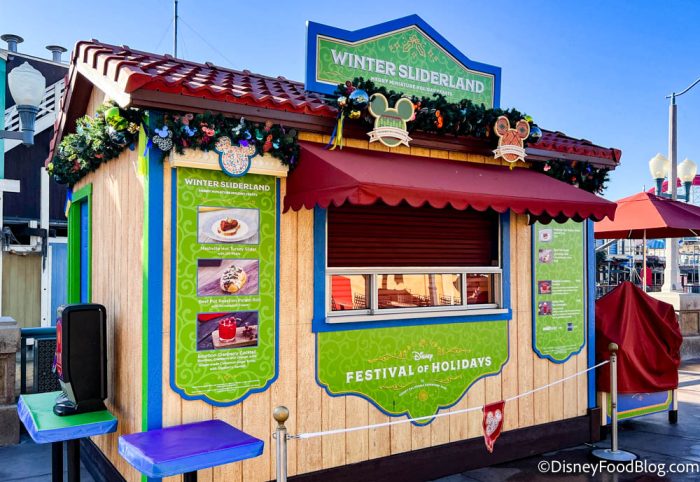 You’ll want to get ready to be treated to some bite-sized snacks and American classics. 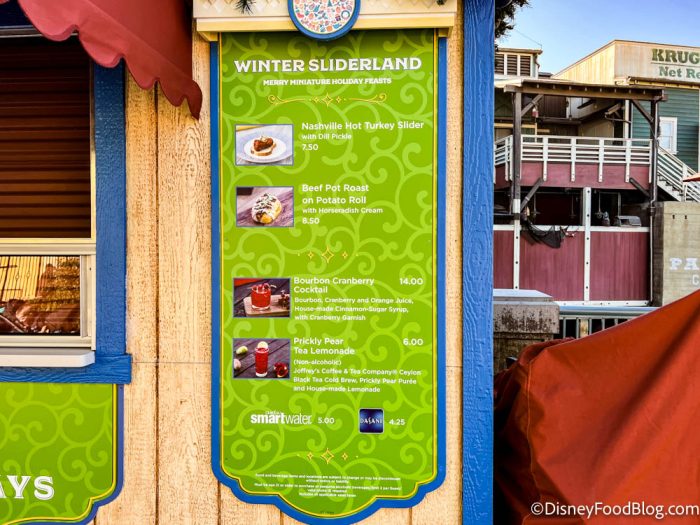 There are some great options for eats here!

The main dish here is the Nashville Hot Turkey Slider with dill pickle for $7.50. If you’ve been following DFB for a little while now (or if you’ve been to the Festival of the Holidays before) you might recognize this guy because it is BACK after a four-year hiatus! 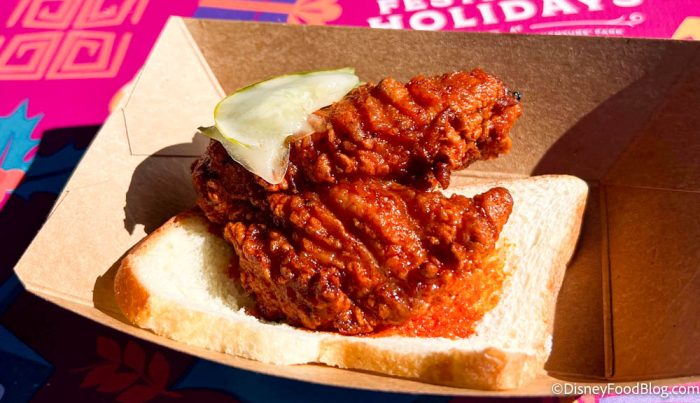 And we’re SO glad to see it return! This slider was our favorite thing from the Winter Sliderland booth. The meat was tender and juicy, and it had a spicy kick to it from the sauce as well. The little pickle slice was refreshing as a contrast to the spicy sauce. Our only complaint is that the bread was a little stale. If you like spicy foods, we think you’ll LOVE this slider. 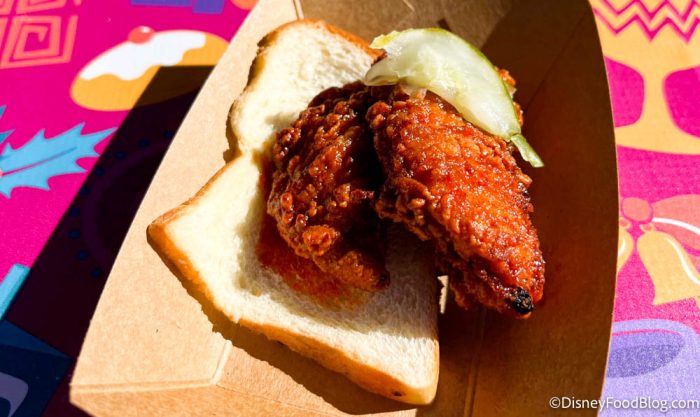 You can also get the returning Beef Pot Roast on a Potato Roll for $8.50. This dish is a potato roll filled with beef pot roast and drizzled with horseradish cream and green onions. 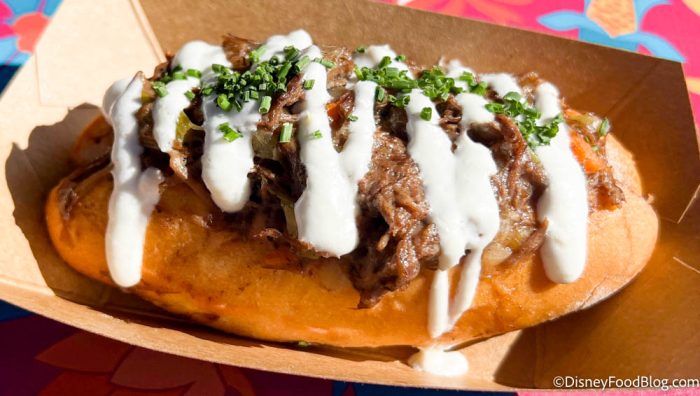 The meat on this slider was very tender and flavorful, and it had little onion and carrot pieces mixed in that were cooked perfectly. They brought just the right amount of crunch to make the textures a little more interesting in this slider.

Beef Slider Roll Cut in Half

The reporter who tried this isn’t a big fan of horseradish, and the horseradish flavor was pretty prominent in this slider. But if you’re a horseradish fan, we think you’ll really enjoy the combination of the sauce with the tasty meat.

Drink-wise, the Bourbon Cranberry Cocktail has returned to the menu for another year and costs $14. It is made with bourbon, cranberry and orange juice, and cinnamon sugar syrup and then topped with a cranberry fruit skewer. 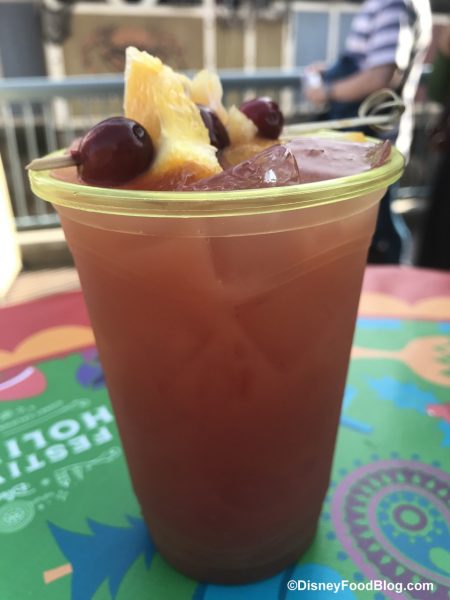 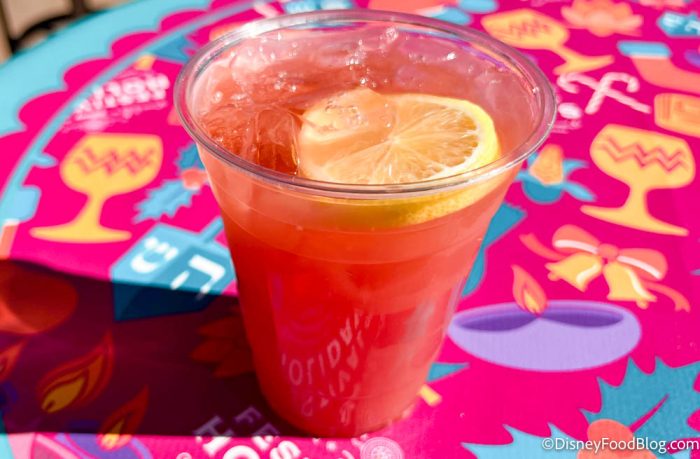 Unfortunately, we thought the lemonade tasted a bit watered down. That might just be because it was sitting out in the sun with the ice melting while we took those lovely pictures, so we won’t judge it too harshly. The strongest flavor was definitely the lemonade, and we could get a little taste of pear mixed in as well.

In general, our favorite part of this booth was definitely the Nashville Hot Turkey Slider. That one does have a pretty spicy kick to it, though, so if you’re not a big fan of spice then you might want to try something different! The Beef Pot Roast on Potato Roll was also very tasty but that horseradish cream is a divisive flavor — usually you either love it or you hate it. The new lemonade was a fun drink to try, especially if you’re looking for drinks without any alcohol, but it didn’t really “wow” us. The portions were generous at this booth, so either of the sliders would make a good shareable snack or even a small lunch. 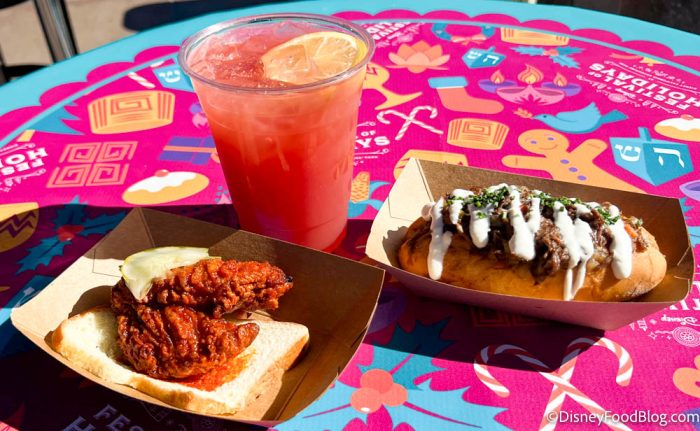 Still hungry for MORE Christmas-themed eats, desserts, and drinks? (We always are!) Keep following the Disney Food Blog as we show you ALL there is to see at this year’s Festival of the Holidays!

Check out Reviews for ALL the Disneyland Festival of Holidays Booths Here!

Are you going to Disneyland’s Festival of the Holidays this year? Let us know in the comments!

« What’s New at Magic Kingdom: An Insta-Worthy Ice Cream Cone and a SLIMY Dessert
HELP! We Can’t Decide Which of Disney’s NEW Ears is Best! »