Following Iger’s return to the Disney CEO position, he held a town hall for Disney employees where he commented on the Park Pass system, the rumors that Disney will merge with Apple, the relocation of Disney’s employees to Central Florida, and the political battles Disney has faced over “Don’t Say Gay” and Reedy Creek.

Florida Governor Ron DeSantis has since responded to Iger’s comments and reposted his response via a Fox News interview on Twitter.

In the Fox News interview, Tucker Carlson commented that one company benefitting a lot from the government (specifically within the state of Florida) is Disney. He went on to claim that DeSantis “changed” that — likely referring to the passage of the bill related to Disney’s Reedy Creek District.

Carlson then noted that Disney changed CEOs “because of that.” We’ve done a deeper dive into this, but it appears there were a multitude of issues that led to Chapek’s removal, beyond just the legal battles in Florida.

Disney’s most recent quarterly earnings report (Q4 for fiscal year 2022) is repeatedly cited as a big reason behind Chapek’s removal. That report revealed that Disney had nearly $1.5 BILLION in quarterly losses in streaming (a huge jump from the same quarter last year), and revenues also missed expectations.

Couple that with Chapek’s internal memo announcing cost-cutting measures (such as layoffs and hiring freezes), Chapek’s handling of the “Don’t Say Gay” issue, Chapek’s handling of the Black Widow situation and lawsuit, what some considered to be Chapek’s overly positive attitude during the earnings call, and other issues, and you can see the multitude of factors that went into this decision.

Going back to the Carlson interview on Fox with DeSantis, Carlson notes that Iger has returned and that during the town hall Iger reportedly said he “regretted” that Disney had fought with the DeSantis administration over the “Don’t Say Gay” bill.

Carlson noted that Disney’s response to “Don’t Say Gay” “led Florida state legislators to strip…Disney of its special status,” referring to the dissolution of Reedy Creek. Carlson also said that this is something DeSantis would know about because he “backed it.”

Carlson then cut to Iger’s clip from the town hall discussion. So what did Iger actually say about the Florida battles? Well, he indicated that he was “sorry to see [Disney] dragged into that battle.”

Though that is the portion of the town hall that was shown in the Carlson/DeSantis interview, Iger also said (during the town hall), that there is “a misperception here about what politics is…Some of the subjects that have been proven to be controversial as it relates to Disney have been branded political, and I don’t think they are.”

This goes back to his earlier comments where he discussed when leaders need to speak up about big issues and how many issues aren’t political, they are a matter of “right and wrong.”

Iger further stated (during the town hall), “Do I like the company being embroiled in controversy? Of course not.”

After showing the shortened clip from the town hall, Carlson asked DeSantis for his response. DeSantis shared that, in his opinion, Florida didn’t “drag” Disney into any issues, but rather “they went in on their own.”

He noted that Disney not only opposed the bill but threatened to get it repealed. DeSantis went on to say, “They brought this on themselves. All we did was stand up for what’s right.”

He also shared, “Yes they’re a big powerful company, but you know what? We stand up for our folks and I don’t care what a Burbank-based California company says about our laws.” 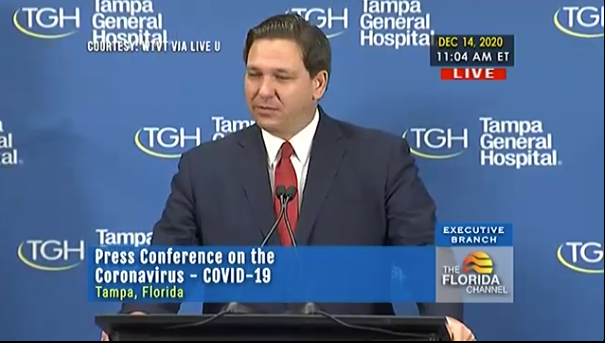 You can see the clip of the interview shared by DeSantis below.

What will happen now that Iger is back? It’s unclear. We’ve discussed how, in some ways, Iger was actually more outspoken than Disney and may be more willing to speak out on big issues. But his experience as CEO, his existing relationship with politicians, and his handling of the situation may change how Disney and Florida interact in the future.

Only time will tell. For our full article on how Iger’s return could impact Reedy Creek, click here. And click here to see whether Iger is on a collision course with DeSantis.