At the International Association of Amusement Parks and Attractions convention held last month in Orlando, about 30,000 industry leaders gathered to discuss the latest trends in food, festivals, and rides. And then, there was a session with the title: “Is Cash Dead?” 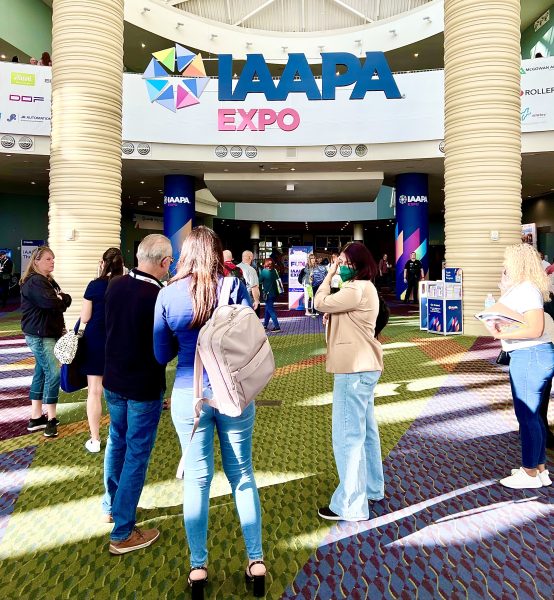 The IAAPA Expo at the Orange County Convention Center

Why would a theme park convention be taking on this economic issue? It turns out there are several reasons Disney World — and other attractions — would just rather not take your cash (most of the time).

If you have visited a stadium in the past couple of years, you may have noticed the trend — many of them are going to a cashless system. What does that mean? Just what it sounds like — you literally cannot use cash. You must use a card, an app or another form of payment.

Disney World and other vacation destinations have offered ways to have a cashless trip for decades — with systems that range from the simple “charge it to my room” to wearable ways to pay that are linked to a credit card (think MagicBands). 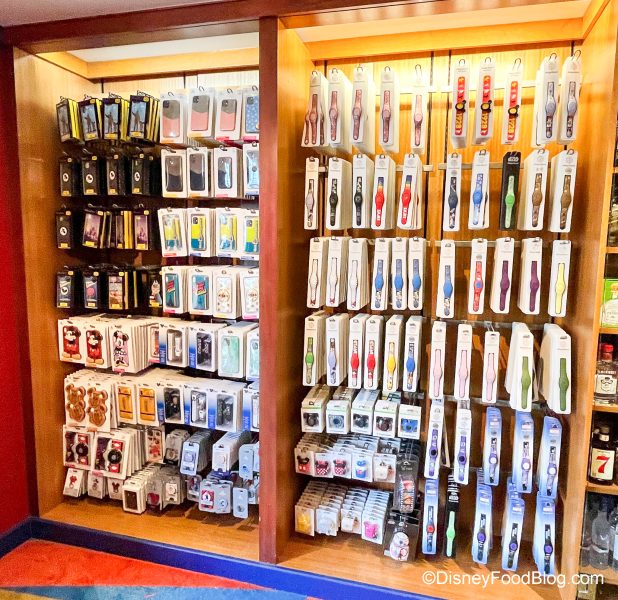 This new wave utilizes those systems but goes much further — to attractions where cash is simply not accepted. We’re digging into the reasons why Disney World and other attractions no longer want to accept cash as frequently, as well as the challenges they are facing in the transition.

What’s So Bad About Cash?

The biggest motivator for the Splish Splash Water Park in Long Island, New York, to go cashless was to save labor. In an era when labor shortages are dramatically affecting the attractions industry, moves to reduce labor needs are happening everywhere. Accepting cash requires behind-the-scenes labor that accepting cards and digital forms of payment does not. 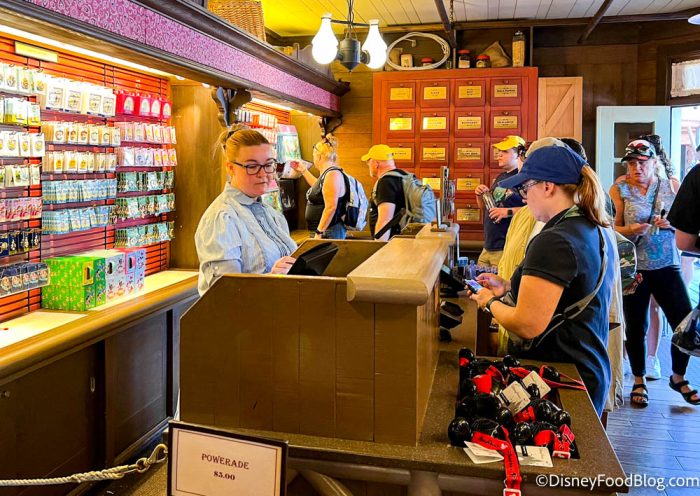 Accepting cash requires behind-the-scenes labor the public does not see.

After Splish Splash went cashless earlier this year, “0ur cash control team was no longer needed,” said Mike Bengtson, the park’s general manager, “and those team members could be used in other areas.”

Jim Forrester, VP of Finance for SeaWorld Parks & Entertainment, said accepting cash also requires cashiers to count their drawers at the beginning and ending of each shift — and that 15 minutes or so each time a drawer is counted adds up when it is done by dozens of employees each day.

Even though we recommend again and again to eat your meals during non-peak times, we’ve all experienced that crazy lunch rush at a Disney World quick-service location. The theme park industry is continually looking for ways to reduce those wait times for customers. After all, less time in lines generally makes us all happier, and moves us along to the next spot for us to spend more money. 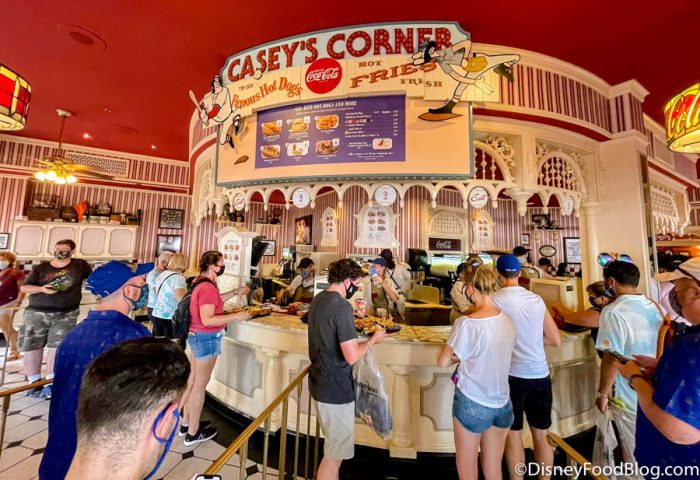 The fact is, it takes longer to accept cash and make change than it does to swipe a card. Sure, it’s just a few seconds more, but with thousands of transactions each day, those few seconds add up to several extra minutes you wait in line each day.

This is the one industry leaders are less excited to talk about, but it is the area where they often see the most savings. “Shrinkage” is the retail industry’s term for, well, theft. In locations where cash is accepted, some of that cash disappears. It is just a fact of life for businesses that a certain amount of the cash they accept will go into the pockets of a few not-so-well-meaning employees. 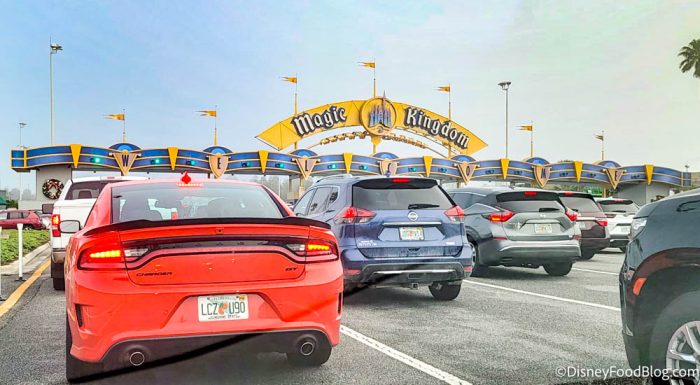 Some theme parks report that going cashless in their parking lots has increased revenue.

Theme parks put all kinds of systems into place to prevent employee theft, but it still happens. Bengtson said the shrinkage savings for the Splish Splash water park was huge this year — especially in its parking lots. Parking revenue increased significantly when cash was no longer accepted, he said — indicating that many cash parking fees were going into employee pockets.

As you can see from the reasons theme parks want to go cashless, stopping accepting this form of money is actually all about, well, money. Labor savings and less theft add up to more profit. But there’s also a psychological factor here. You (we, most of us…) spend more money when we’re not spending cash.

“If you’re using cash in particular, real paper greenbacks, when your purse or wallet is empty you’re done, so you can limit your spending in that way,” Rod Griffin, Senior Director of Consumer Education at Experian told CNBC. 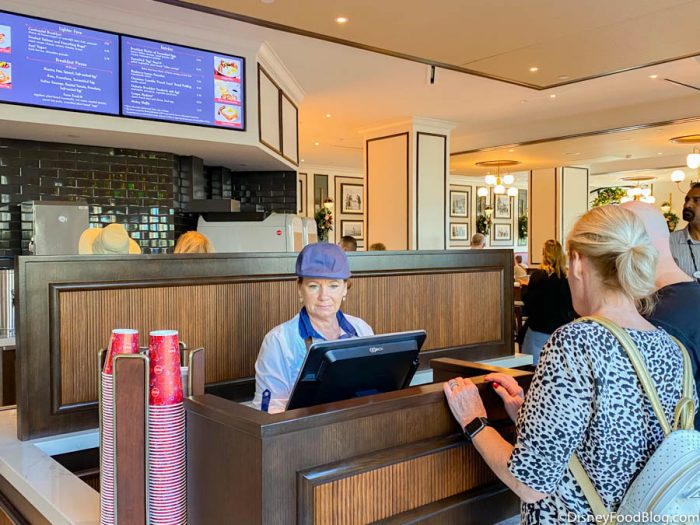 Eric Summers, Director of Finance at the Santa Cruz Beach Boardwalk, said the psychological aspect of spending from a card rather than cash is a motivating factor. “Going to a cashless model has helped our revenue growth,” Summers said.

Bengtson said that per capita spending at his park is also up since going to the cashless model.

“When you have cash, you’re counting it. When you have a piece of plastic, you’re not counting it, you’re just spending it.” said Bob Frimet, CEO of Kiosk Prepaid. “The spend goes up 30 to 40 percent.”

SeaWorld encourages guests to pay through its app or with a card, but still accepts cash. “There is a lot of upside (to going cashless), but there is some risk we think,” said Forrester.

While it may seem that everyone has a debit card these days, there are roughly 5.9 million households in the United States that are “unbanked” — meaning no one in the household has a bank account, according to a 2021 FDIC report. 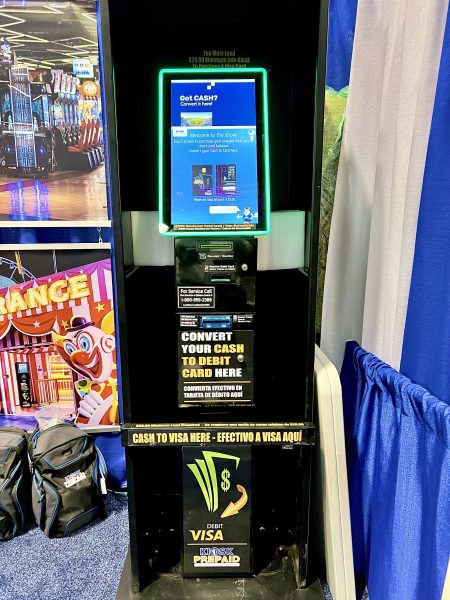 A Kiosk Prepaid “Reverse ATM” on display at the 2022 IAAPA Expo.

Disney and other theme park companies don’t want to eliminate any customers because they usually spend cash, so they sometimes put “Reverse ATM” systems into place when they go cashless. “This gives you the option to put cash into a kiosk and get a Visa Card, and now they can use that Visa Card anywhere,” Frimet, whose company provides Reverse ATMs, said.

Another group that could have trouble in a theme park that doesn’t accept cash: Children. Summers said groups of children that come to the Santa Cruz Beach Boardwalk — on day camp field trips, with church groups, etc. — are typically handed spending cash by their parents for the outing. Bengtson said these “camp kids” were also a concern for Splish Splash, but the company developed a procedure for reaching out to the groups and educating them beforehand.

As for Frimet’s Kiosk Prepaid machines, he said there’s no age limit on using them. They collect a phone number and ZIP code, but no other personal information. “A 7-year-old can use it,” he said.

The switch to a cashless system comes with technology concerns — as the transactions all rely on a network. Network issues that require Disney World to only accept cash for a short time are not all that uncommon. And paying through phone apps requires a good cell signal — one that will support hundreds or thousands of customers using data at the same time. 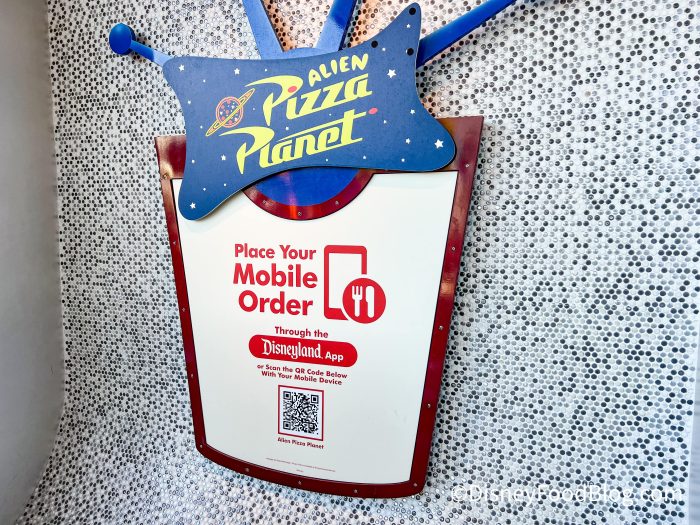 “There is a fair amount of IT infrastructure investment” that would be required at SeaWorld Orlando before the park could go completely cashless, Forester said. So, theme parks adopting this model would need to have capital to spend on the improvements.

Despite seemingly ubiquitous social media posts claiming it, there is no federal law or regulation that requires U.S. businesses to accept cash. “Private businesses are free to develop their own policies on whether to accept cash unless there is a state law that says otherwise,” according to the Federal Reserve. 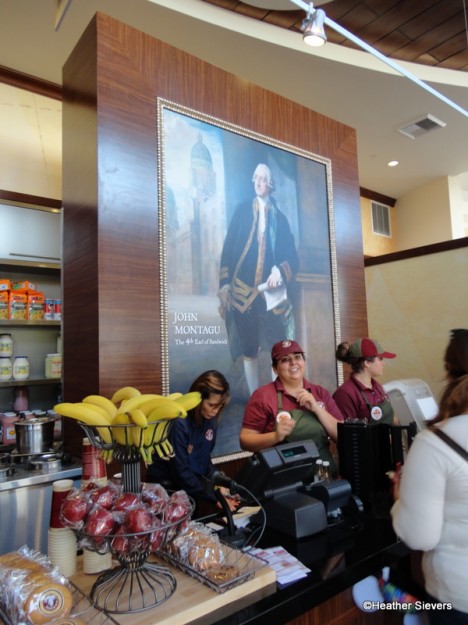 But that doesn’t mean there aren’t legal concerns. States such as Colorado and Massachusetts, and cities including New York City and Washington, D.C., do have laws on the books requiring businesses to accept cash. These laws were mostly passed to protect the significant amount of households that are unbanked, as we mentioned above.

That’s where the Reverse ATM comes into play. The business IS accepting cash through those machines, and converting it into a card that the food and beverage and merchandise locations around the park can accept.

“You can still bring cash, you just have to convert it into a card,” Bengtson said. “The transition was pretty seamless for people.”

While many theme park employees are not usually tipped, there are some locations — such as table service restaurants and lounges — where tips are generally accepted. Employees in those locations might naturally be concerned about getting tips in an environment where guests are told to leave their cash at home. 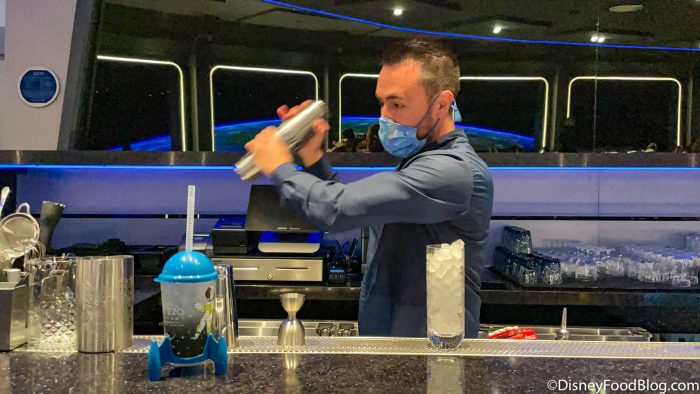 Forester acknowledged that potential tipping issues were one of the concerns that SeaWorld still has questions about. “Now we want to understand how to make efficiencies without taking things away,” he said.

The Harsh Reality Behind Mobile Ordering in Disney World

“If cash is not dead, it is at least on life support,” Forester said. Theme parks including Disney World and other larger chains are all examining the issues, to see if they can make the leap that appears to have been successful at smaller parks.

We will be keeping an eye on this trend as more parks move toward cashless systems. Stay tuned to DFB for the latest!

8 HUGE Ways to Save on Your Next Disney World Trip

What do you think about theme parks going cashless? Share your thoughts in the comments!