One of the REAL best-kept secrets of Disney dining is that you can find most of your favorite Disney Princesses at Akershus Royal Banquet Hall in EPCOT’s Norway pavilion! 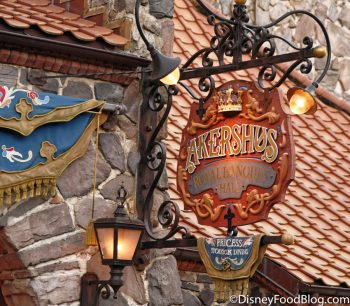 Though characters can vary, guests can typically look forward to meeting Princesses such as Snow White, Cinderella, Belle, Princess Aurora, and Ariel… all in a truly royal, castle-like setting.

Breakfast is served family-style and features American favorites with the addition of a Norwegian Smorgasbord.

Lunch and Dinner include “A Taste of Norway” featuring Scandinavian items like smoked fish, imported cheeses, and cured meats. And each guest gets to choose their own entrée with selections such as Tradisjonell Kjøttkake (meatballs) and Grilled Filet of Salmon for adults and Pizza and Mac and Cheese among the choices for the little Princes and Princesses.

The food is good, but clearly the princesses are the real draw.

Please Note: Akershus Royal Banquet Hall is currently closed while Disney World continues in its phased reopening. We will update this page with reopening information as soon as it is announced!

Breakfast is served as a combination of family style and buffet, with pastries, scrambled eggs, bacon, and potatoes. Lunch and Dinner offer entree choices along with an authentic Norwegian koldtbord (selection of prepared salads, sliced meats and cheeses) and an assortment of Norwegian-style desserts. All are fixed price meals.

See ALL of the Character Meals at Disney World here!