Ready to spend a meal hob-nobbing with Disney royalty and some of your favorite Disney characters? 1900 Park Fare at Disney’s Grand Floridian Resort provides just what you and your little Prince and Princess are looking for. 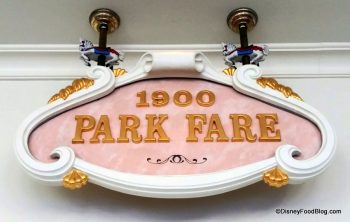 Buffet dining with Disney characters is offered for both breakfast and dinner! Though featured characters may vary, the Supercalifragilistic Breakfast provides the chance to meet characters such as Mary Poppins and Alice in Wonderland, and rarely seen characters like The Mad Hatter.

Cinderella and Prince Charming are your hosts for Cinderella’s Happily Ever After Dinner (and you may even encounter Lady Tremaine and Cinderella’s stepsisters, Anastasia and Drizella)!

Note that weekday afternoons feature a special event for guests ages 4 – 12: the Wonderland Tea Party at 1900 Park Fare. You can find out more about that specialty offering here.

Please Note: 1900 Park Fare is currently closed while Disney World continues in its phased reopening. We will update this page with reopening information as soon as it is announced!

At the Supercalifragilistic Breakfast, the restaurant serves a buffet menu with American favorites. Enjoy scrambled eggs and carved ham along with light and fluffy mini pancakes or Mickey-shaped waffles, Cinnamon Sticky Buns, and many more sweet and savory selections.

In the afternoon, Alice and her friends entertain little ones at the Wonderland Tea Party. Kids are given cups of a special “tea,” (which tastes like apple juice… how curious!), and children decorate and eat cupcakes.

Cinderella’s Happily Ever After Dinner offers buffet entrees such as salmon and roasted prime rib. Kid-friendly fare like chicken, cheese pizza, and macaroni and cheese, is also available.

See all of the dining options at Disney’s Grand Floridian Resort HERE!