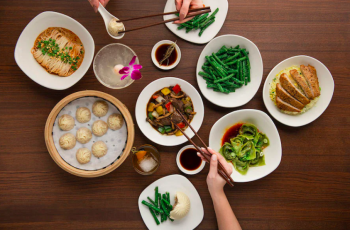 Disney has shared that the Chinese restaurant will serve dishes family-style in “a creative space near our new lawn pavilion” in Downtown Disney.

Din Tai Fung is famous for soup dumplings, which are “hand-crafted right on sight,” at its current locations in Las Vegas, Costa Mesa, and other places in Southern California, Oregon, and Washington. These are in addition to international locations in Japan, South Korea, Singapore, China, Hong Kong, Indonesia, Malaysia, Australia, Europe, and Thailand.

Din Tai Fung originally opened in Taipei, Taiwan. According to the restaurant’s website, Mr. Bing-Yi Yang immigrated to Taiwan and opened a shop selling cooking oil. He named the shop Din Tai Fung. He and his wife sold dumplings in their shop as well, called Xiao Long Bao (steamed pork soup dumplings). These dumplings became so popular that Mr. Yang “phased out his oil business” and Din Tai Fung became a full-blown restaurant.

We can’t wait to keep you posted on opening information for the new Downtown Disney location as it is revealed!

Click HERE to learn MUCH more about Din Tai Fung!

Service: Not yet known

Reviews:
Not yet known — This location is not yet open in Downtown Disney. You can learn more about the experience at other Din Tai Fung locations here!

Famous Dishes: Not yet known; however, a favorite among critics is the Kurobuta Pork Xiao Long Bao, which is “hand-folded and stuffed with top-quality, carefully seasoned pork.”