Steakhouse 55 is known for its delightful tea menus, but especially for its themed events with lots of eats and treats inspired by Disney attractions and films! 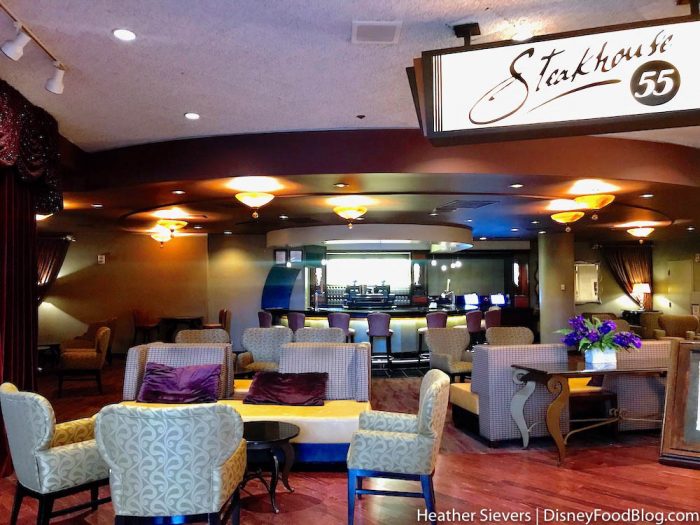 Now through the end of March, you can have an afternoon tea fit for a princess or prince with the So This is Love: A Cinderella Anniversary Tea! And, we’re taking you with us to try all the small bites, treats, and drinks being offered at the event (complete with lots of cute decorations put up by the bluebirds, Jaq, and Gus Gus!). 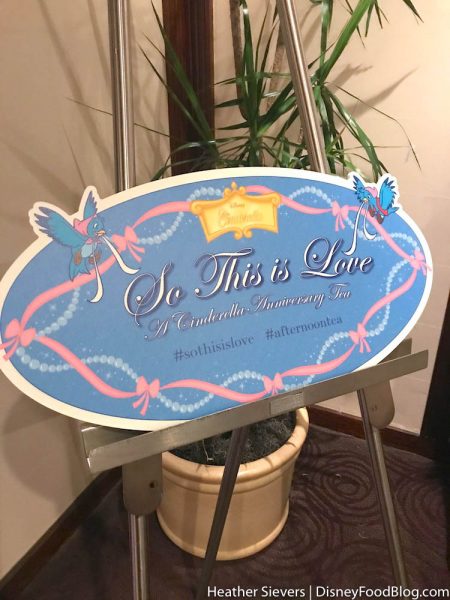 So This is Love: A Cinderella Anniversary Tea

Before you make your way to your table, you can admire a collection of Cinderella memorabilia (yes, even a REAL LIFE fairytale book) that’s available for purchase… 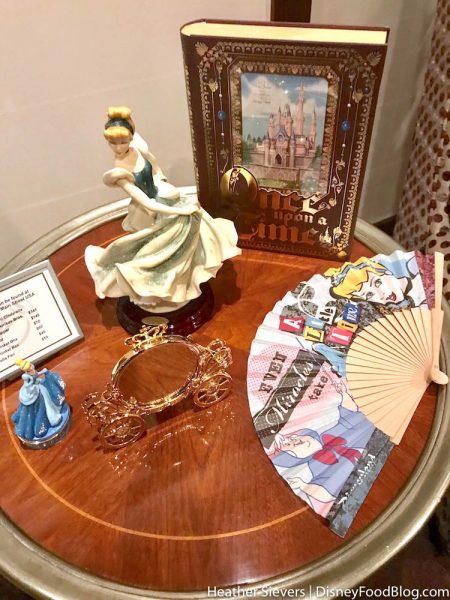 …or the Disney Precious Moments Dolls, including Cinderella, Prince Charming, and the Fairy Godmother herself! Do you think she could change our outfits into ballgowns?? 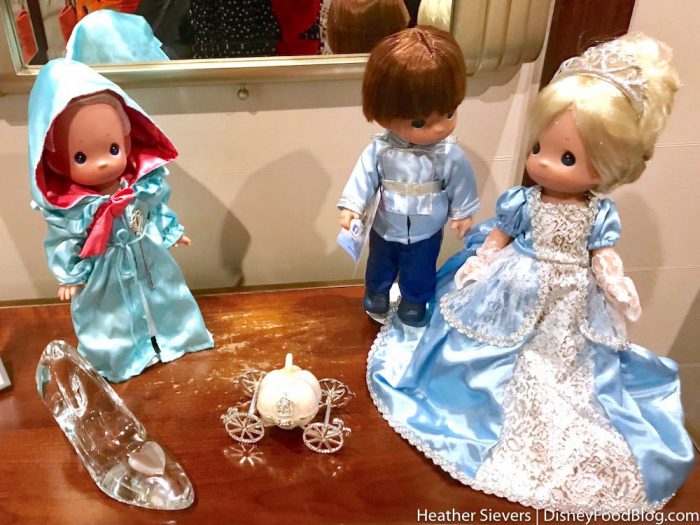 Plus, you can even pose like a Disney Princess in the mini photo-op! Periwinkle blue boas are basically all the rage, if you ask us! 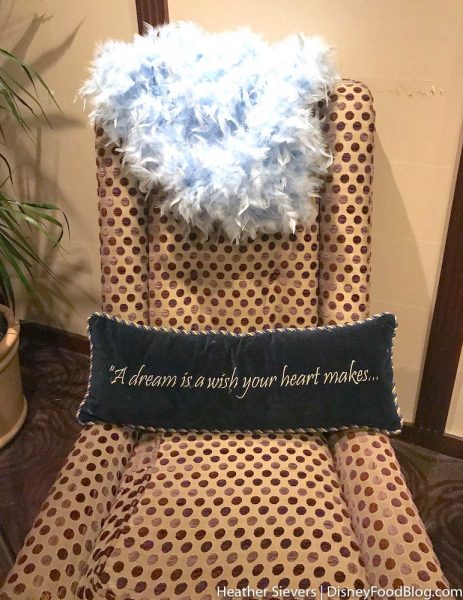 A Photo-Op Fit for a Queen!

Buuuut, the adorable decorations don’t just stop there! Each table is adorned with themed bouquets with different surprises from the film! 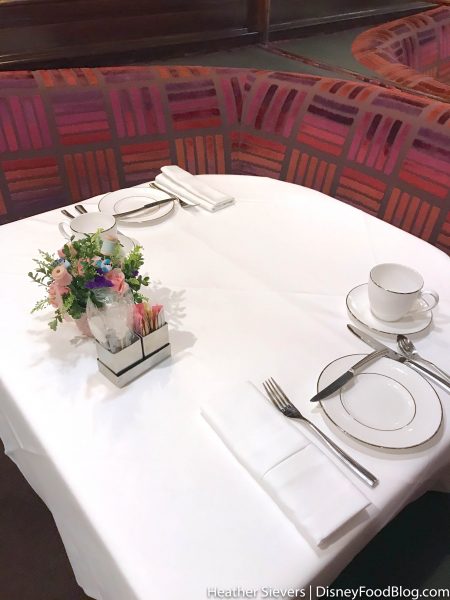 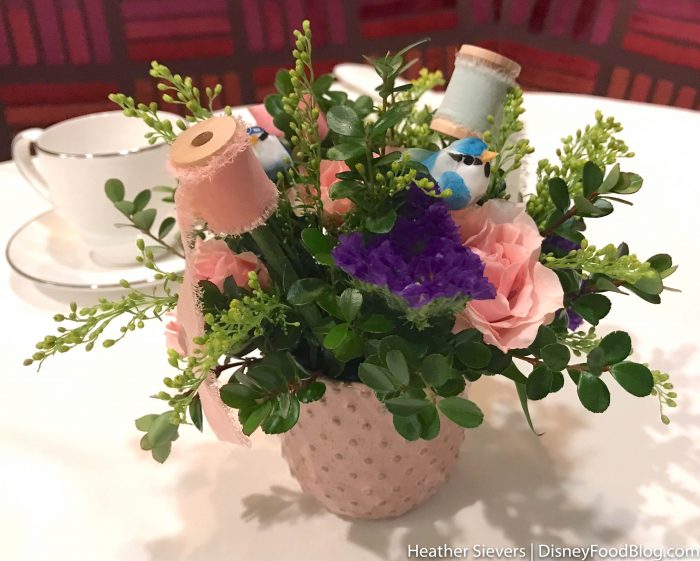 And what a fine centerpiece this pumpkin, we mean carriage, will make! Just look at how it shimmers with the Fairy Godmother’s twinkling magic! 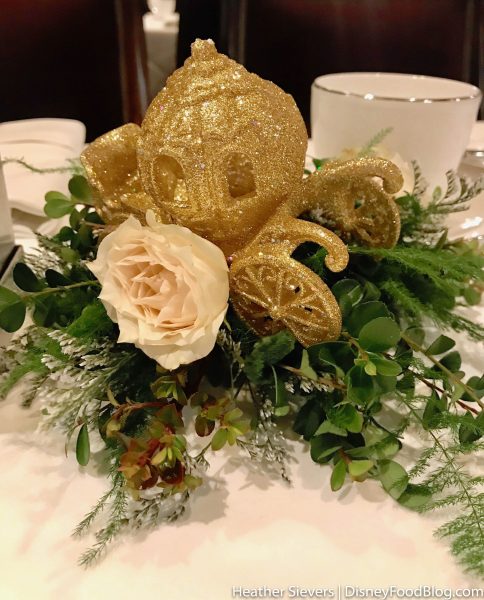 The room was filled with the aroma of freshly-cut flowers thanks to these gorgeous white roses! 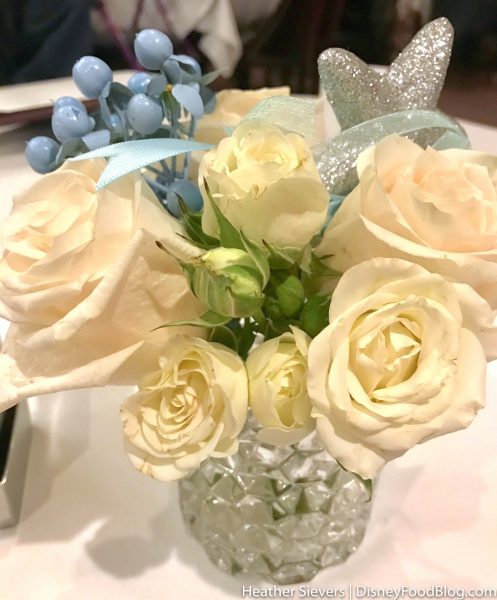 It looks like Cinderella’s parted ways with one of her glass slippers again! Of course, her footwear makes a great focal point when resting in a bed of pretty flowers! 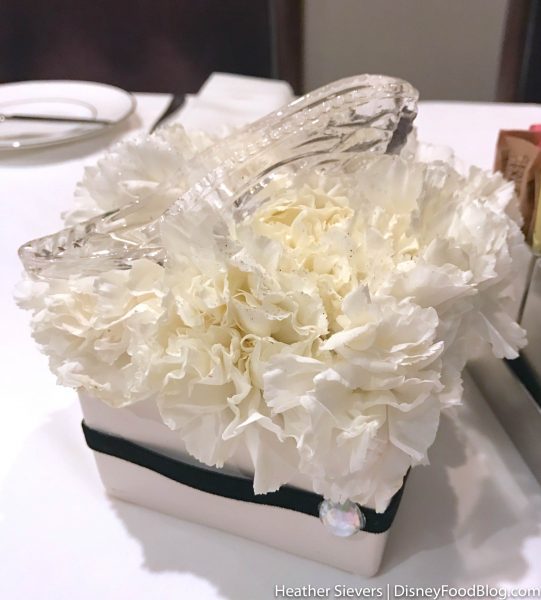 Here’s the menu of the Classic Afternoon Tea we’re about to settle into! Notice the variety of teas it features including White Teas, Black Teas, Green Teas, and Caffeine-Free Herbal Teas.

There’s even a section of tea-infused cocktails we’ve got our eye on at the bottom! There’s Before Midnight — a Blue Ginger Tea featuring Bombay Sapphire Gin, Tequila Lychee, The Lemon Drop Tea and a Nutty Martini made with Makers Mark whisky bourbon! 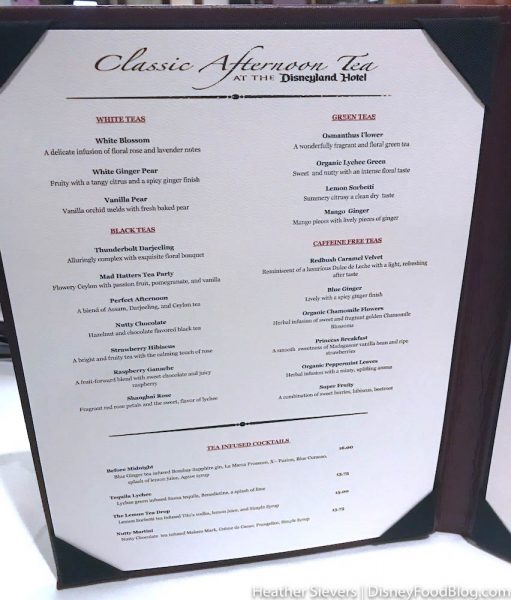 Our hot tea came with an adorable rock candy swizzle for stirring — it reminded us of the Fairy Godmother’s sparkly wand! 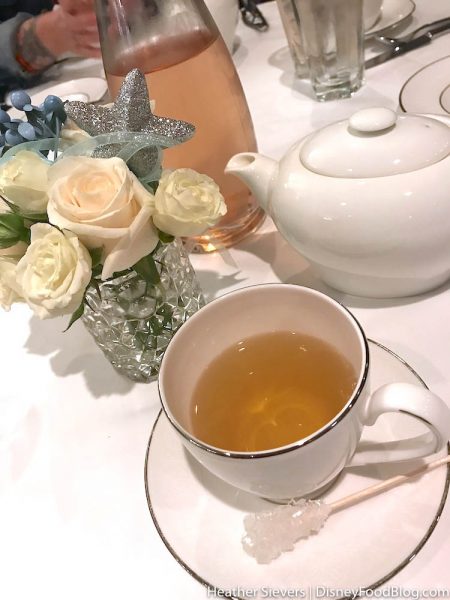 While the tea was delicious, we couldn’t stop thinking about those infused cocktails, so we ordered a Before Midnight and The Lemon Tea Drop because we were just too intrigued not to try ’em! 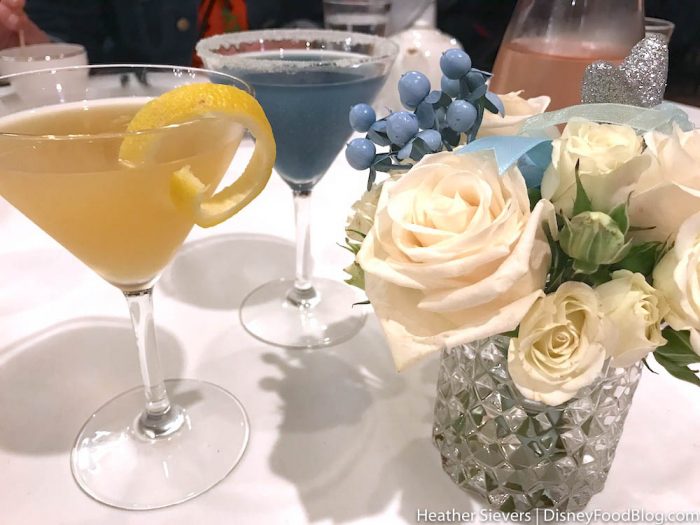 Before Midnight is just as stunning as Cinderella’s signature ballgown — in fact, it would look just like the skirt of her dress if the drink didn’t spill out when we turned it over! We were all about this shimmery blue beauty! 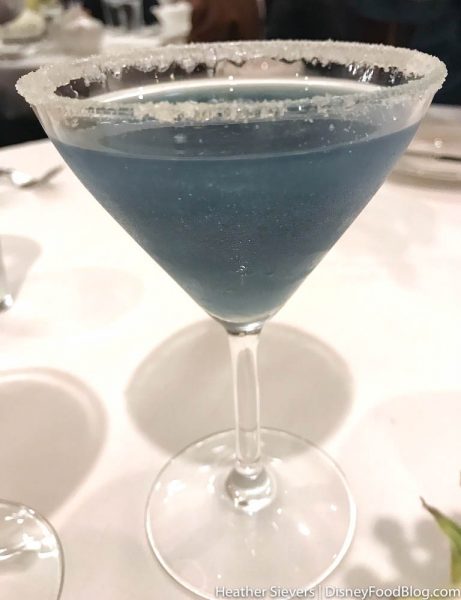 The Lemon Tea Drop was a nice twist on a classic Lemon Drop! Get ready to pucker when you sip this one! 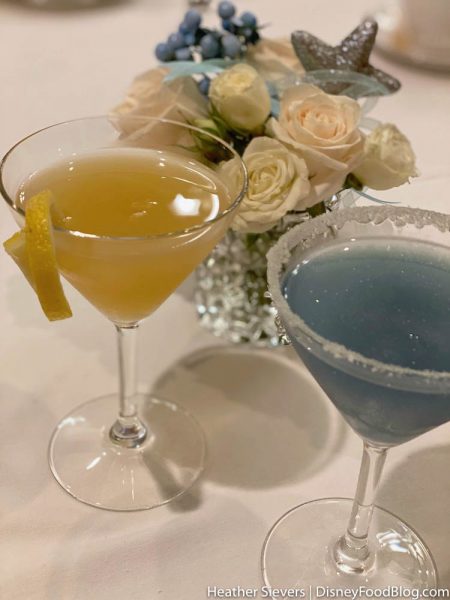 And now the moment you’ve all been waiting for! It’s time to talk about the special Cinderella Tea Party eats! The menu is separated into Classic Tea Party ($55) and Premium Tea Party ($70) sections. The Premium Tea Party includes the same offerings as the Classic menu, with the addition of sparkling wine, salad, and a farewell truffle. A Kids Tea is also available with the more approachable foods for $35 per child. 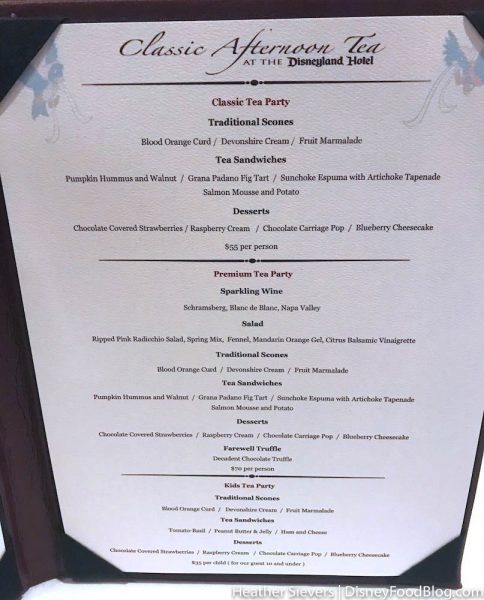 The Classic Tea Party has plenty of Cinderella goodies to enjoy, so we opted for the somewhat cheaper, abridged version. Here’s what landed on our table — as you can see, plan on coming HUNGRY! 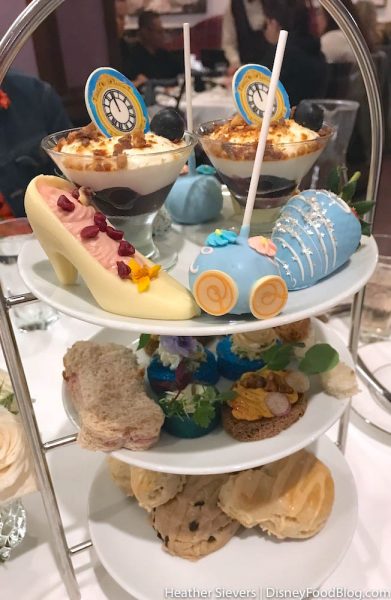 This embarrassment of riches is a lot to take in, so we’ll break it down tier-by-tier and treat-by-treat! 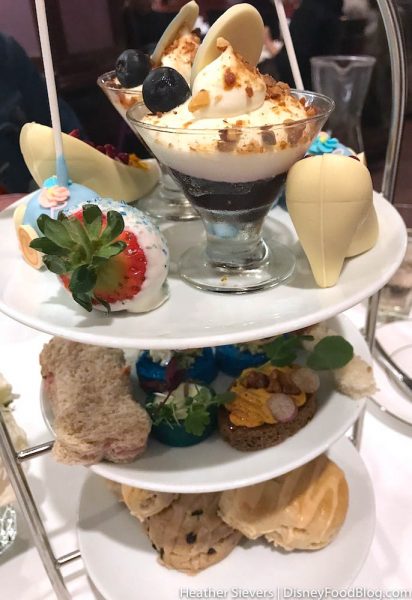 On the lowest level, you’ll find a selection of Traditional Scones. The adorably Mickey-shaped ones are lemon-based with blood orange glaze on top while the round ones are mocha-flavored with chocolate chips and an espresso chocolate glaze! 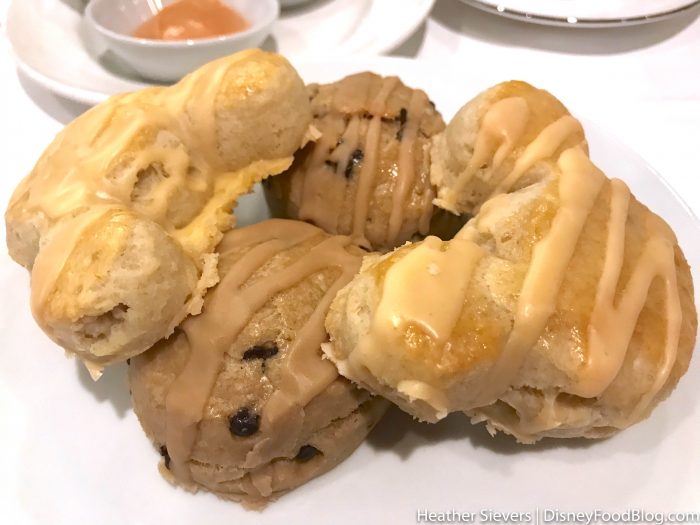 On the side, you’ll find blood orange curd, Devonshire cream, and raspberry preserves for slathering those puppies up! 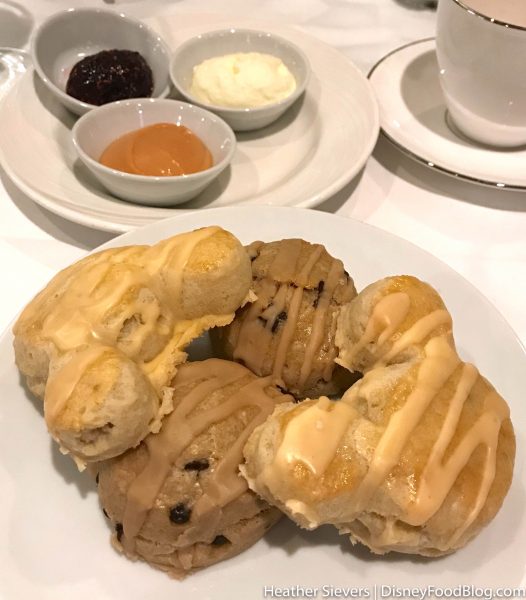 And on the tippy-top most tier, you’ll find a selection of Cindy-inspired sweets such as the Blueberry Cheesecake with a toffee nut crumble, Chocolate Covered Strawberries, Chocolate Carriage Cake Pops (don’t they look similar to the ones we’ve seen at Disney World), and a white chocolate Glass Slipper filled with raspberry mousse with marigolds and freeze-dried raspberries on top! 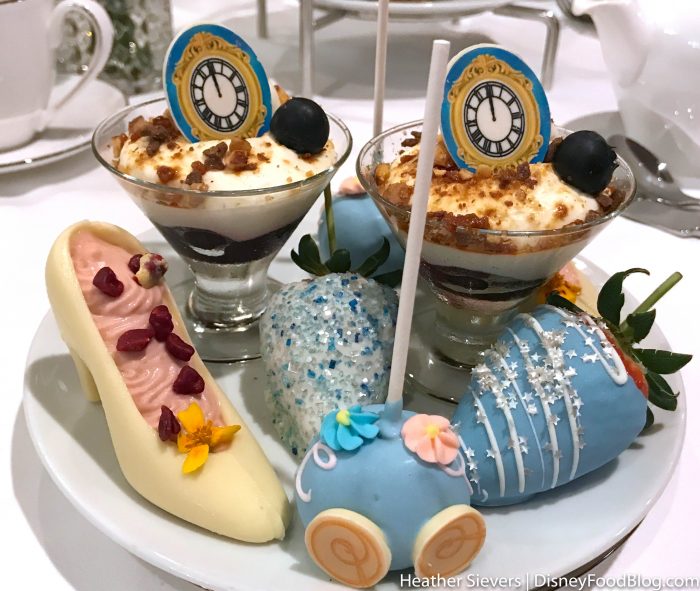 Have you ever seen a more fitting tribute to our girl Cinderella than this spread? It’s truly fit for a princess! 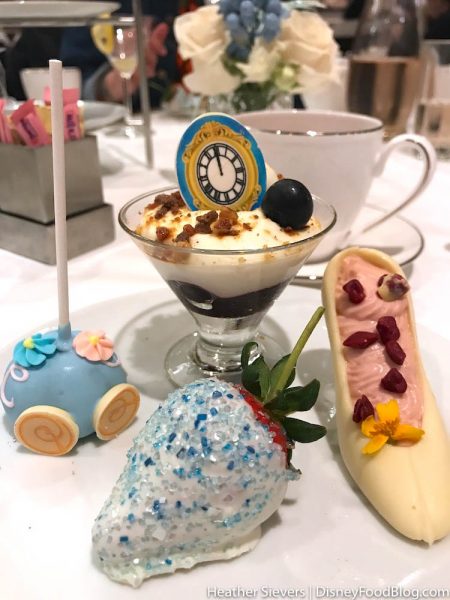 And if you thought the desserts were adorable, just wait until you see the special Cinderella-themed Tea Sandwiches! There’s Bruno’s Bone which is ham and cheese along with Broom — a classic peanut butter and jelly sandwich. The Bluebird features cream cheese, with basil and tomato, and is shaped like a friendly songbird with blue bread! 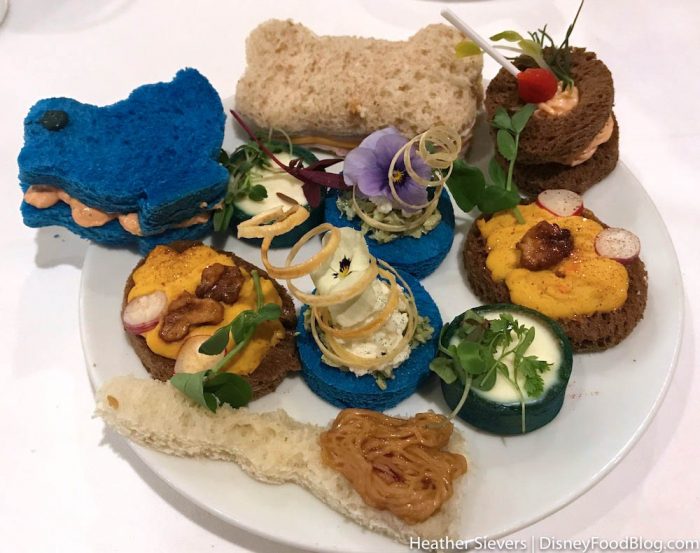 The Carriage is pumpkin hummus with radish wheels and walnuts while Lucifer’s Milk Bowl features panna cotta, Grana Padano cheese, fig, and mixed greens. The last one is Sunchoke Espuma served on that vibrant blue bread and had a potato spiral and artichoke tapenade. 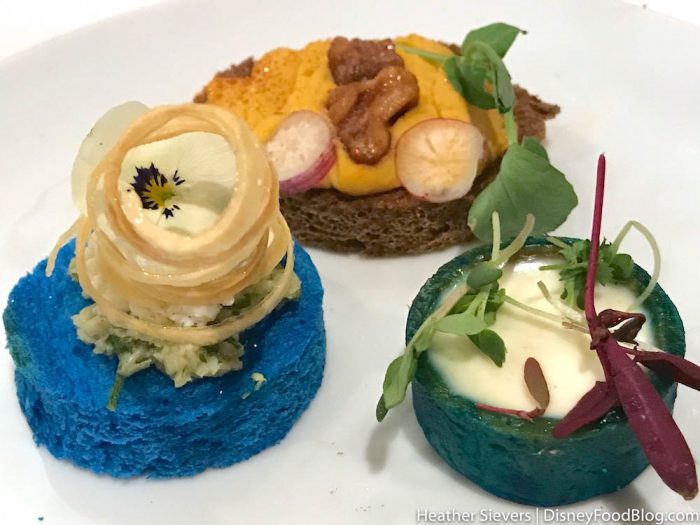 We hope you’ve enjoyed this enchanted So This is Love: A Cinderella Anniversary Tea as much as we enjoyed reporting it to you! Click here to learn more about making reservations for this limited-time tea party which will end before the clock strikes midnight!

Have you gone to the Cinderella Anniversary Tea at Steakhouse 55 yet? Let us know in the comments below!

« We Have A Sneak Peek at the NEW Magic Happens Parade Merchandise Coming to Disneyland (And There Are SORCERER EARS)!
Let the Good Times Roll at Fat Saturdays This Mardi Gras Season in Disney Springs! »