There are some pretty spectacular stage shows at the Disney parks! From Festival of the Lion King to Fantasmic, we’ve seen incredible entertainment of the highest caliber!

While many shows at Disney World and Disneyland have pulled out all the stops, other shows left us scratching our heads. We dug up shows that you won’t BELIEVE were at a Disney park!

The first show on our list opened with EPCOT on October 1, 1982. There was a ton of new and innovative technology on display when EPCOT first opened, including the earliest versions of the computer. The Astuter Computer Revue was the first “behind-the-scenes” show at Disney World and showed guests some of the computer technology that ran EPCOT. 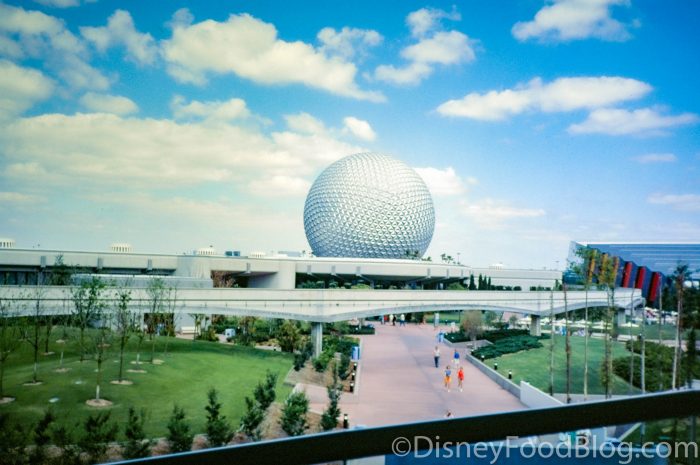 Home computers were not prevalent yet, so the show dwindled in popularity over time. The Astuter Computer Revue was actually the first attraction at EPCOT to close after the park opened, and it played its final performance on January 2, 1984.

Check out some of our old family photos at Disney World!

Disney’s Dick Tracey film was supposed to be a massive blockbuster hit, and Disney added its very own stage show to MGM Studios shortly after the film premiered in 1990. A Disneyland version of this show also existed, although it did not last long on either coast. 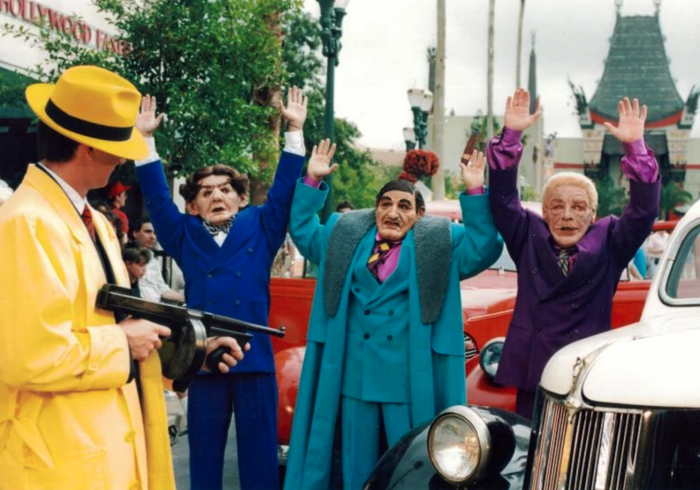 It ran at MGM Studios from May 1990-February 1991, and at Disneyland from June 1990-December 1990. Looking back, we’re sort of glad this show didn’t last long as it was designed. Those characters looked FRIGHTENING.

Think you’re a Hollywood Studios expert? See how much you know here!

Remember that early 90’s ABC family sitcom Dinosaurs? They’re coming BACK, but did you know they had their own stage show and mini-parade at MGM Studios!? The puppet-like quality of the dinosaurs lent itself to be featured in a Disney park, and it was created as a means to promote the television show. 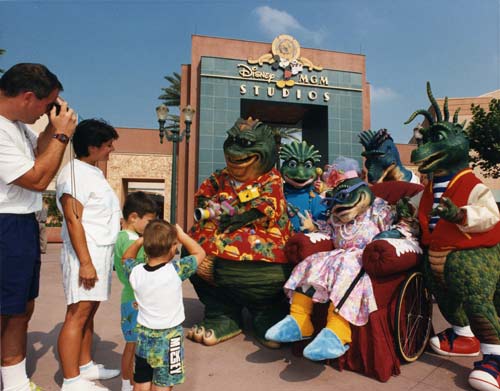 Reports indicate that it never caught on with guests, and the show ended its run less than a year after it began in August 1992.

Ever wanted to own a piece of Disney history? Find out how you could have done so in a BIG way here!

The hit cartoon series Doug found success on both the Disney Channel as well as Nickelodeon throughout the 1990s. This popularity carried over to the Disney parks, where in March of 1999 it got its very own stage show at MGM Studios. 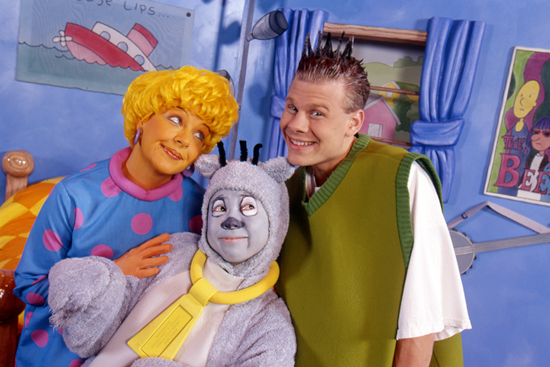 Audience members were selected to go on stage to play with the fictional Doug band, The Beets, in their big show. Doug Funnie and Pattie Mayonnaise were also added as walk-around characters in the park. The show lasted for about two years and closed in May of 2001.

Why can’t we meet MORE rare characters these days? Find out why, plus other weird things that need explaining, here!

Our next show ran from 1986-1987 as part of EPCOT’s 15th-anniversary celebration. This show was MASSIVE, as there was literally a center-ring circus in the middle of Future World! 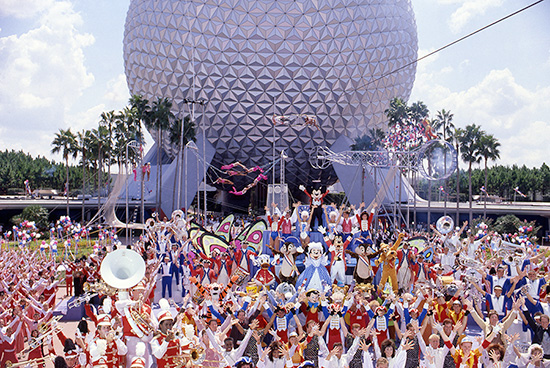 The show featured circus animals, acrobats, and more! Looking back, those costumes were VERY 80s. It’s also hard to imagine circus elephants walking through EPCOT, but at least we have the photos to look back on.

Check out our historical timeline behind one of Disney World’s most iconic snacks!

This cult-favorite stage show ran in MGM Studios from October 1997 through November of 1998, just in time to squeeze in two Halloween seasons for this popular children’s horror book and television series. (Y’all, MGM was a WEIRD, wild ride, wasn’t it??) 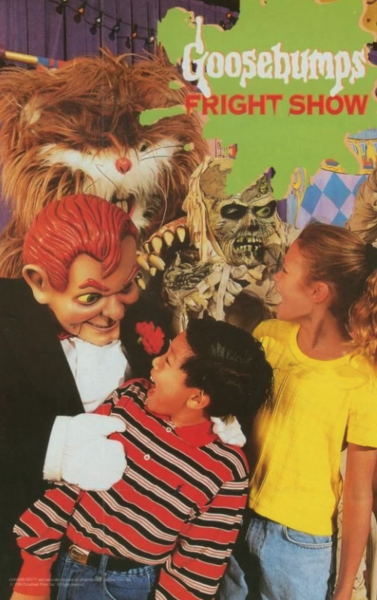 The stage show itself was a spinoff of the television series and was more of a magic show for guests. The show was then followed by a funhouse maze of mirrors, which brought guests into a gift shop. Now, R.L. Stine is bringing his creations to Disney+!

Ever wonder what the backstory was behind some of Haunted Mansion’s residents? Find out here!

The Magical World of Barbie

In 1994, EPCOT got its very own Ambassador of Friendship, and it was none other than Barbie! Yes, THAT Barbie. Disney and Mattel were working on a partnership that involved several of Mattel’s property appearing in the parks, including the massively successful doll known as Barbie. 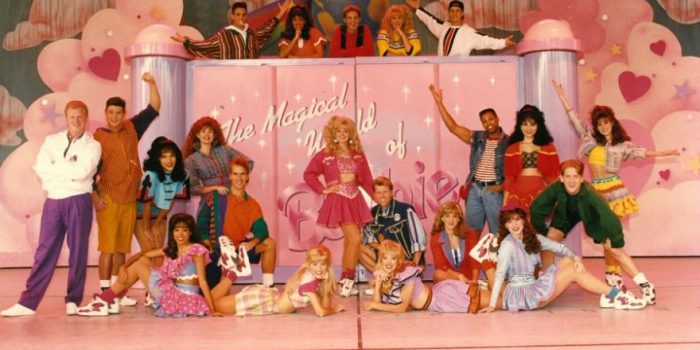 The show was a by-product of this attempted partnership. It ran from November of 1993 until May of 1995, and took place in the American Adventure Pavilion in World Showcase. Barbie drove around World Showcase in her pink GLITTER stretch limo and guests could meet Barbie and Ken after the shows!

We’re traveling WAY back in time for our next show! The Mickey Mouse Club Circus debuted in Disneyland during its inaugural year of operation, in November of 1955. The show was held in a big top tent behind Fantasyland, where admission at the time was 50 cents for children and adults. If you wanted reserved seating, it would run you a whopping $1.00 per person. 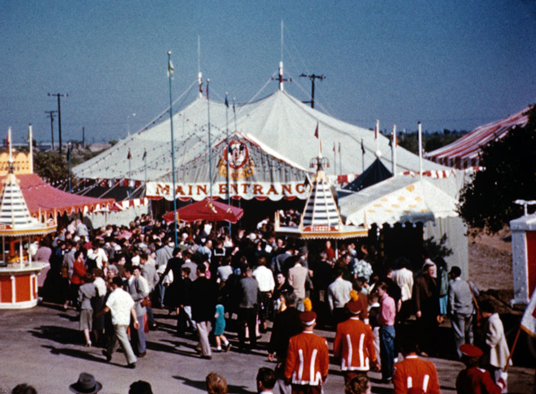 The show was 75 minutes long and featured twelve major acts, including animal performers, clowns, acrobats, and more. The run of this show, however, was not very long, and it closed in January of 1956, just a couple of months after it began.

Check out these real-life places that were the inspiration behind some of your favorite Disney animated films!

This next show, Splashtacular, was loosely based on the show “It’s Magical!” from Tokyo Disneyland. When it moved to EPCOT, it lost its fairytale, fantasy-based theming, and instead took on a more sci-fi look and feel to fit the mold of Future World. 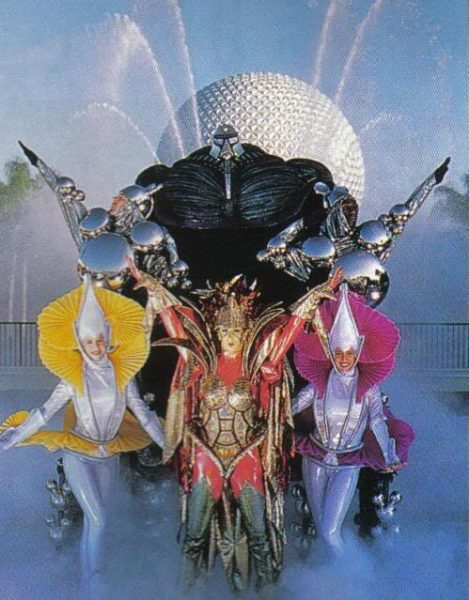 The show took place near the Fountain of Nations and ran from November 1993 until June 1994. Once the show closed, however, the additions to the Fountain that produced elaborate water displays throughout the day remained in Future World until 2019, when the fountain was demolished to make way for changes due to the Epcot Transformation.

Check out the major transformation coming to EPCOT here!

The last show on our list is actually the longest-running out of all the shows we’ve talked about! The Teenage Mutant Ninja Turtles had their own show and mini-parade in MGM Studios from 1990-1995 and was immensely popular with guests! 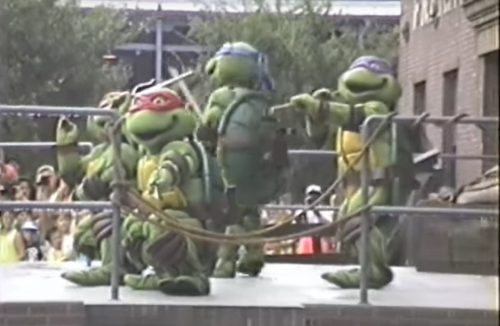 This was one of the more successful non-Disney franchises to find its way into the parks, which we have learned was NOT uncommon in the early years of MGM Studios.

Some of these shows were straight-up bizarre (and most of them came, not surprisingly, from the craziness that was early MGM Studios!). While we may look at the stage shows of today in the Disney Parks and think how great they are or what they COULD be, just remember — there was a day when Slappy the Dummy and Ace Ventura were trolling the streets of now-Hollywood Studios. Just think of how our grandkids will look back and talk about how we were crazy for Festival of the Lion King or Mickey and Minnie’s Royal Friendship Faire! Actually…none of that can touch Dick Tracy and aliens fighting around the Fountain of Nations. Those were straight-up ODD. 🙂


Did you see any of these shows back in the day? Share your stories in the comments!

« Start Your Vacation Planning TODAY! Save 40% off EVERYTHING in the DFB Store with Our Fourth of July SALE!
News: Face Masks Are Now Required Citywide in Anaheim, California »