It’s been another glorious week for Disney Springs at Walt Disney World!

We spotted a TON of new merchandise, construction updates, and even a new store. We’re here to give you the low-down on everything new and worth mentioning at the Springs!

LovePop, a stationary store focused on intricate paper art designs, is getting its own permanent store at Springs! 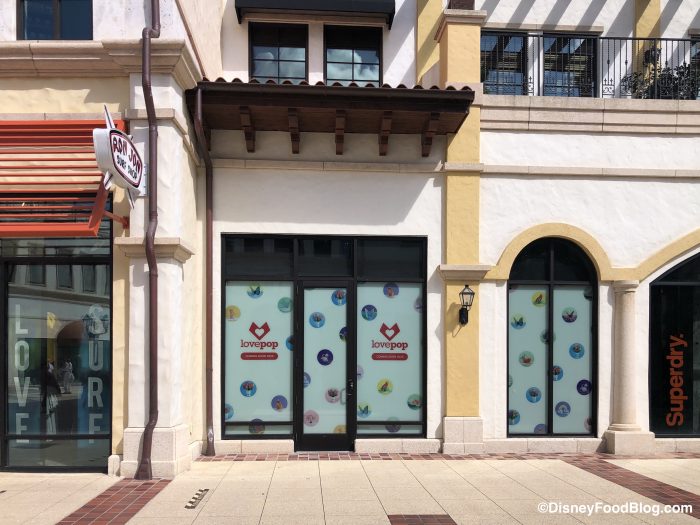 Ample Hills was located on Disney’s BoardWalk and was set to open a new location in Disney Springs. We recently learned that the ice cream will no longer be located anywhere on Disney World property. The Ample Hills sign was quickly taken down from the BoardWalk. 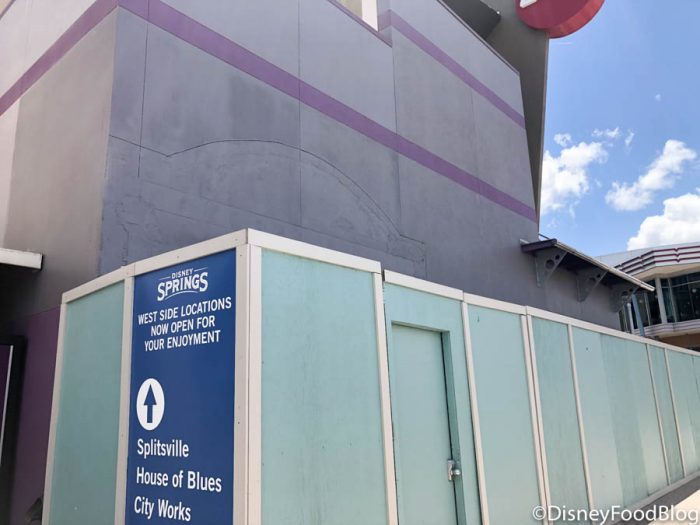 Now, Disney Springs has removed the “coming soon” sign from the Ample Hills construction wall too.

The Disney Ticket Center is the central hub for Disney ticket purchases at Disney Springs. The ticket center recently reopened so we headed over to see how they are handling the new health and safety protocols. 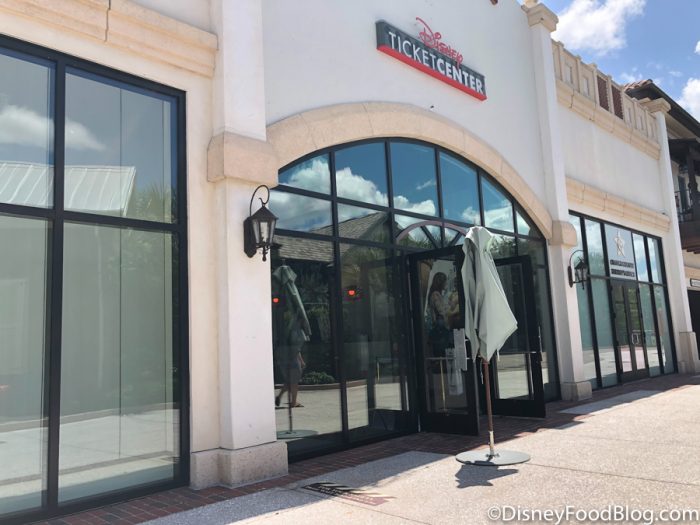 The center now has plexiglass barriers are placed between Cast Member and guests and physical distancing markers inside and outside the door.

Entertainment at Disney Springs has been very sparse lately. 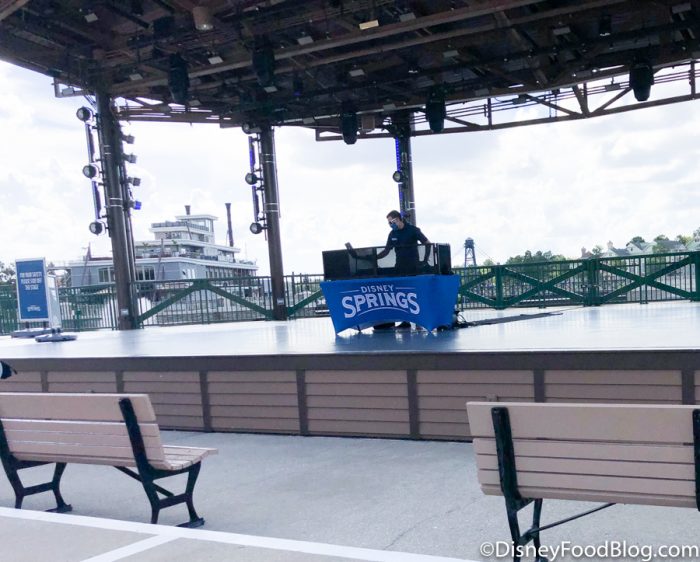 We noticed that the DJ was playing tracks and entertaining the crowd outside of World of Disney on Friday night!

Learn more about the ONE other form of entertainment you can catch at Disney Springs!

Erin McKenna’s has been busy bakin’ up some new tasty treats recently! Last week, we spotted a GIANT thin mint that would make any Girl Scout jealous. 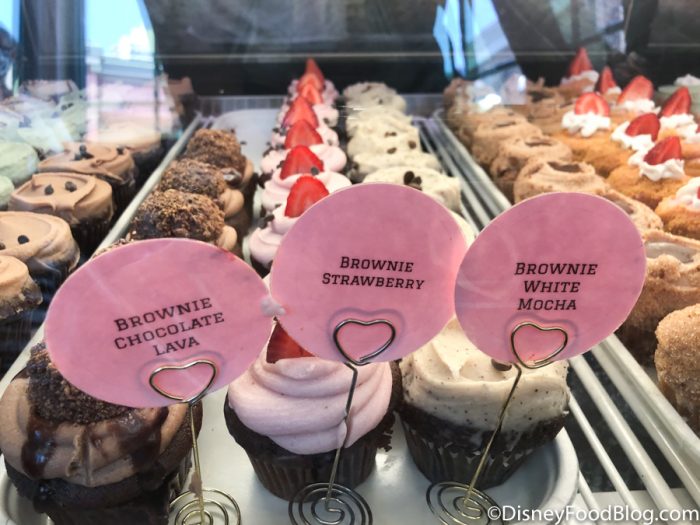 This week, they dropped the gauntlet with THREE new cupcakes. Stop by the vegan and gluten-free bakery for a Brownie White Mocha, Brownie Chocolate Lava, or Hot Fudge Pop-Tart cupcake!

Splitsville delayed reopening the bowling alley and restaurant until well after the other restaurants opened in Disney Springs. The bowling alley opened a few weeks ago and is currently running a Bowling Happy Hour. 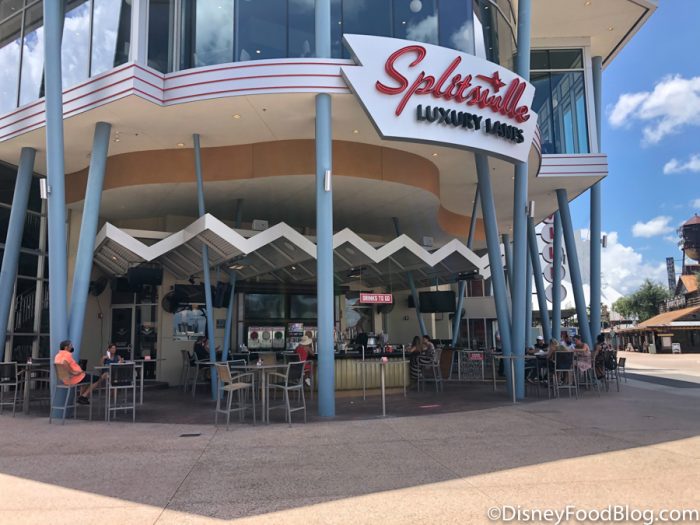 On Friday, the restaurant opened its outdoor bar and seating too!

Forget back to school supplies! Summer is still kickin’! We spotted three new beach towels at World of Disney this week. The Disney’s Enchanted Tiki Room towel featured all the birds singing words, the Alice in Wonderland towel beckoned us to “go for a spin,” and the Toy Story towel featured a ton of familiar characters from the movies! 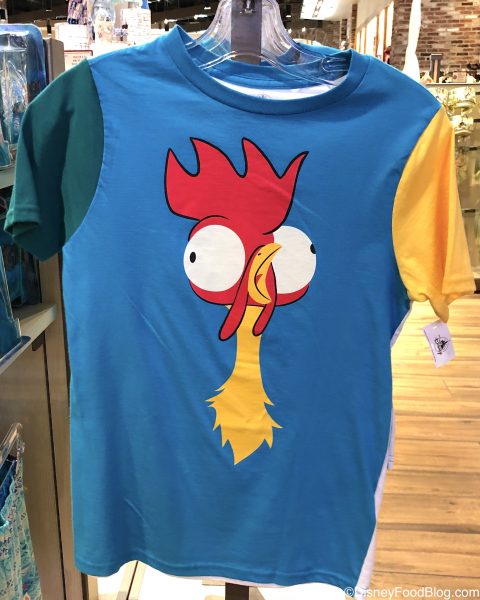 They’re so cute and fun!!

Learn more about all the new reversible tees here!

Does your wardrobe need a little character? 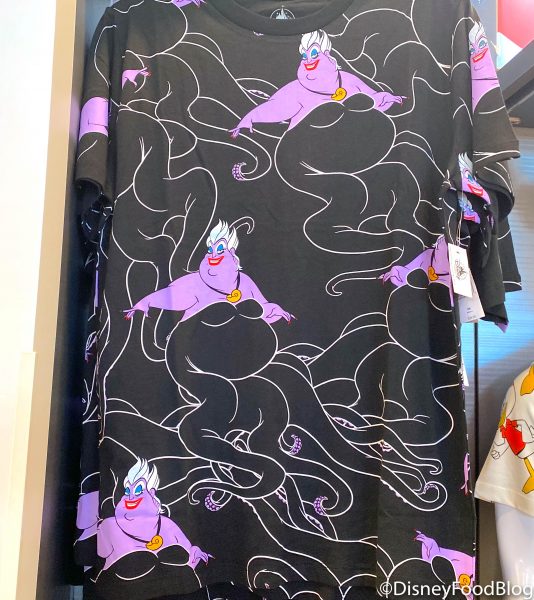 We found new patterned Ursula, Ducktales, Fox and the Hound, and Pluto t-shirts!

Another noteworthy find was this incredibly adorable Yoda plush! 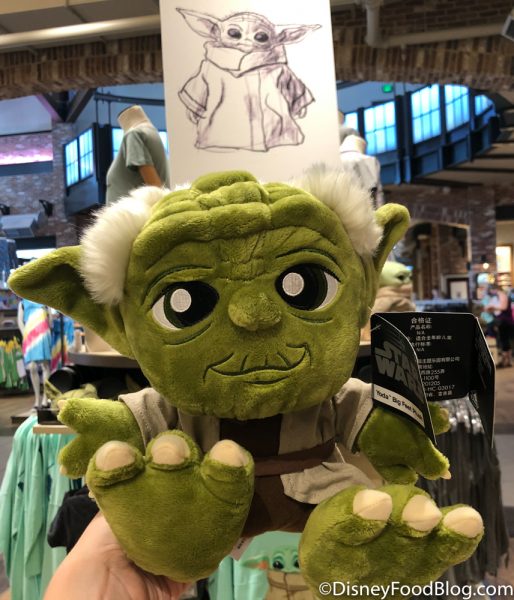 He’s got a giant heart and GIANT feet! 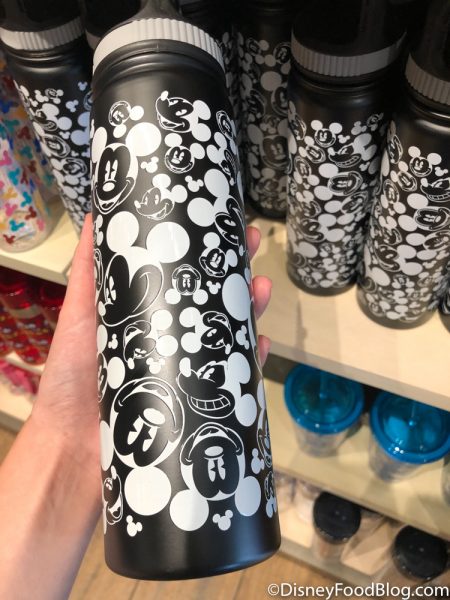 Refillable water bottle stations are still in use at many Disney World locations, so this would be a great purchase for park goers!

Check out some more new Disney cups we found recently!

Who’s ready for a night on the town? We spotted a brand new bright neon Mickey tank by Her Universe that will light up any dance floor… 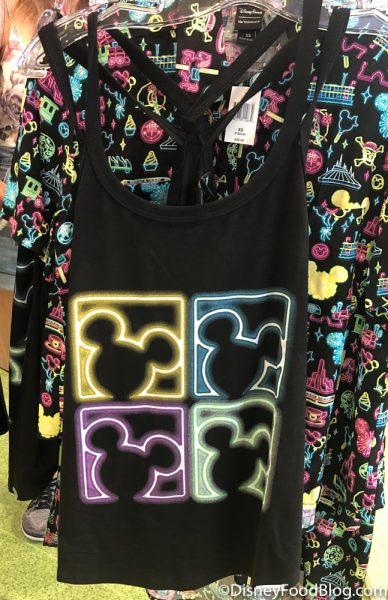 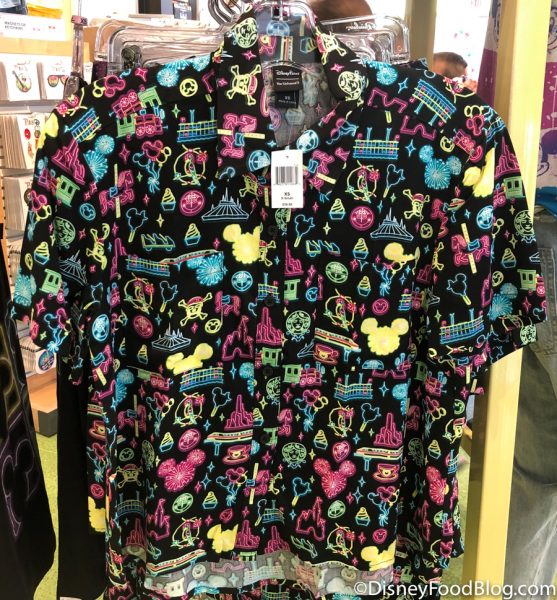 …and finished the outfit with some totally rad spandex shorts! 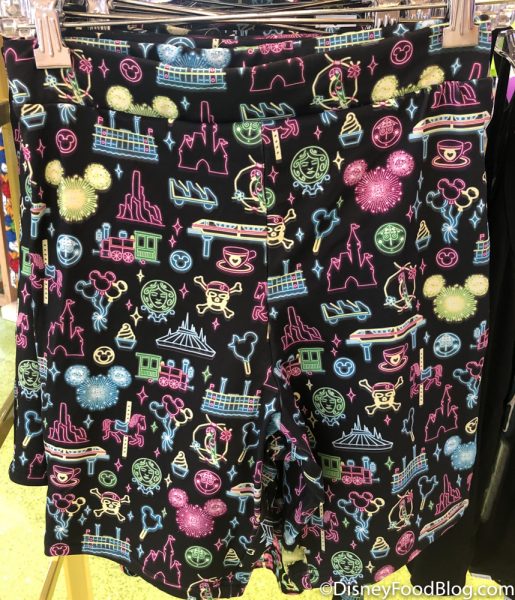 Can you spot your favorite attractions icon?

D-Tech on Demand had a few new items in stock this weekend! We spotted a ton of new Mandalorian car magnets that any Baby Yoda fan would crazy for… 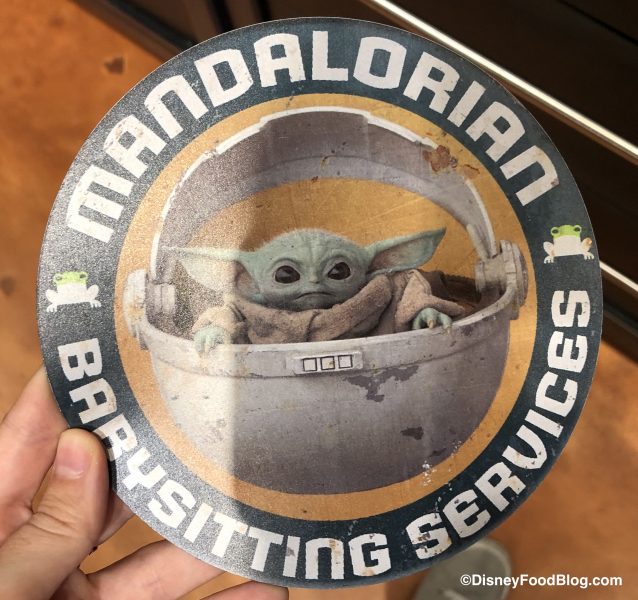 …and a new Mickey and Minnie’s Runaway Railway phone case that will be the perfect accessory on your next trip to Disney’s Hollywood Studios! 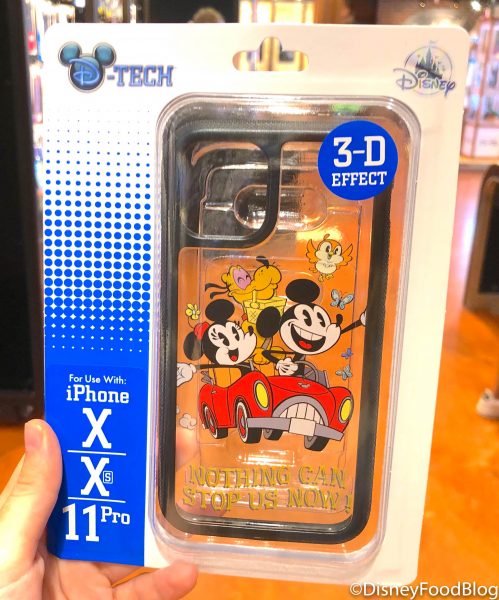 Nothing can stop this case now!

Disney Tails melted our hearts with this new hat inspired by Dug, the beloved dog from Up! 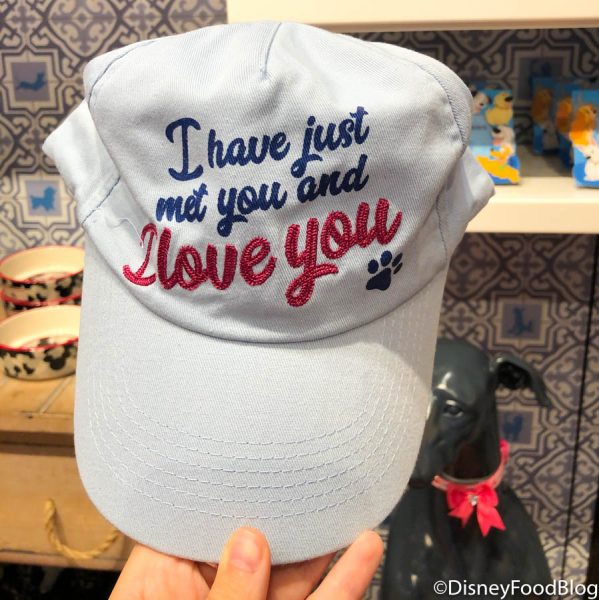 The front is embroidered with his famous saying, “I just met you and I love you” and the back has an adorable picture of Dug.

Time for a throwback! We found a Proud Family pin that’s perfect for any child of the 90s. The cartoon was a hit on Disney Channel and is now streaming on Disney+. 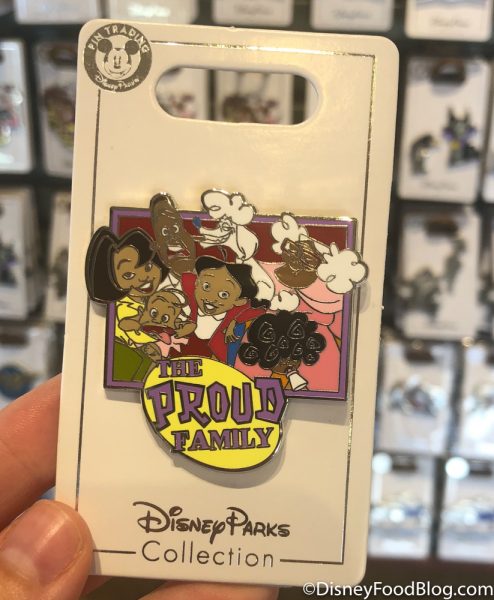 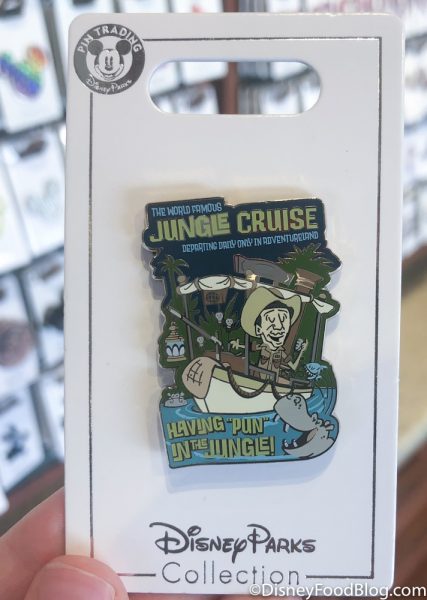 This is just one piece of a HUGE new collection of Jungle Cruise merch.

Disney Springs is continuing to ramp up since the grand reopening. We’ll keep our eyes peeled for more food, merchandise, and construction updates!

Check out everything new we spotted last week at Disney Springs here!

Are you heading to Disney Springs soon? Let us know in the comments!

« NEWS! Fireworks Return to Shanghai Disneyland on a Trial Basis
Prepare A Culinary Cabaret With This NEW ‘Beauty and the Beast’ Spatula Set in Disney World! »