Aulani, A Disney Resort & Spa is located in Ko Olina on the Hawaiian island of Oahu.

We’ve shared some updates about this resort, including how guests can save on a stay there in 2022 and what restrictions are currently in place there. Now, we have some important updates about some weather that has recently impacted Hawaii, including the island where Aulani is located.

According to USA Today, the governor of Hawaii, David Ige, declared a state of emergency for the entire state on Monday afternoon. This state of emergency is due to the serious storms that have impacted various Hawaiian islands recently.

The National Weather Service Honolulu has posted a number of updates regarding the weather. Note that Honolulu is also on Oahu but is about 30-60 minutes away from where Aulani is located.

According to the National Weather Service, a “strong kona low produced heavy rainfall December 5-6, 2021 that had major impacts throughout the state of Hawaii, including power outages, and damage to homes and vehicles.”

The image in the tweet below shows the 2-day rainfall totals in inches. Aulani is located on Oahu, where various areas saw over 11 inches of rain over the past few days.

A strong kona low produced heavy rainfall December 5-6, 2021 that had major impacts throughout the state of Hawaii, including power outages, and damage to homes and vehicles. Visit https://t.co/xcDfRHq0mC for full list and latest event totals and updates. pic.twitter.com/LeD8fmIjfl

According to The Weather Channel, the state of emergency is expected to last in Hawaii until at least Friday. In some areas of Hawaii, homes have been flooded, roads have been blocked by mudslides, and water and power has been knocked out all due to these storms.

On December 6th, the Oahu Emergency Management Twitter account noted that a flash flood warning was in effect until 10:15PM. That warning was later lifted. It later noted that emergency shelters on Oahu were opened as part of the relief effort, and most recently shared how they are asking residents and businesses to report storm damages.

According to the New York Times, flash floods and heavy rains battered Hawaii over the past few days, but the “islands have largely been spared the landslides and catastrophic floods that officials had been concerned about.” The New York Times notes that the Kona low is a specific type of storm that “typically stalls, drops large amounts of rain in one location and comes from a southerly direction, bringing moisture to areas that do not usually get much rainfall.”

Due to the location of the Hawaiian islands, it is rare for the Kona low to stall right over them. Adam Weintraub, a spokesman for the Hawaii Emergency Management Agency, said that this was an “extreme weather event.” 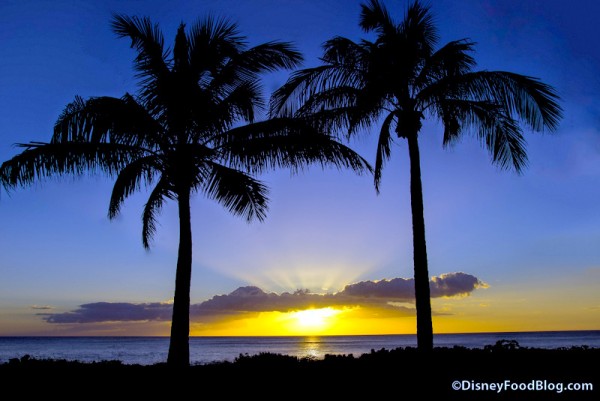 The New York Times notes that “one of the most inundated parts of the state was Honolulu, which saw floods in urban areas that were caused in part by clogged drains.” The waters were reportedly “waist deep” in certain parts.

At this moment, nothing about the storm has been noted on the website for Aulani, A Disney Resort & Spa or on its official social media accounts. We’ll be on the lookout for more updates.

Click here to see 7 treats you can get at Aulani.