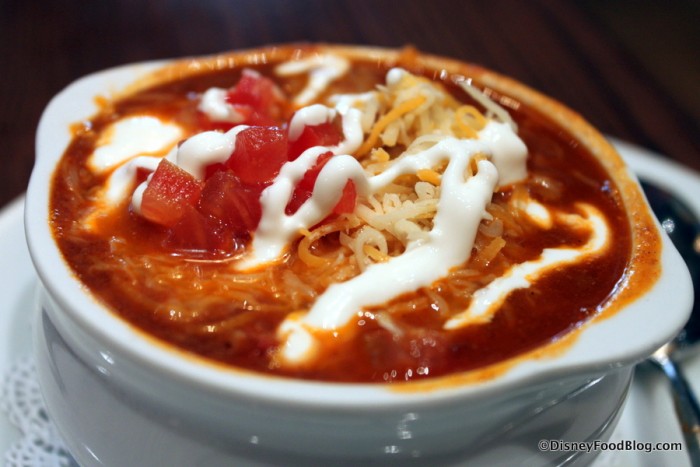 We’ll list the official chili recipe here with pictures and some notes of our own! The measurements listed here serve 6 to 8 people. 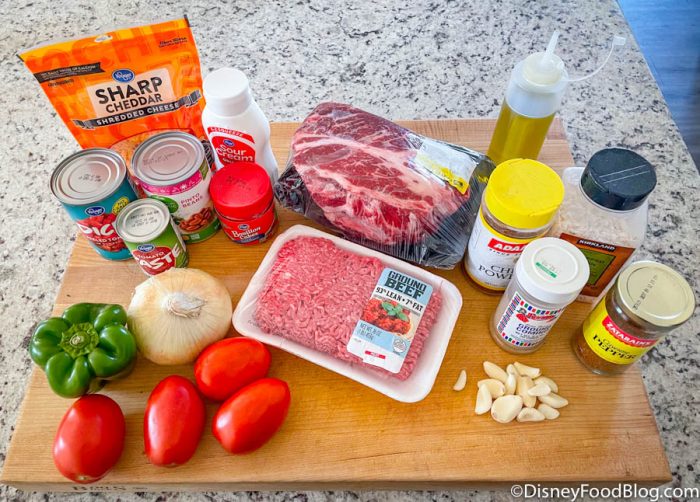 Heat 2 tablespoons of the oil in a large Dutch oven, over medium heat for 5 minutes. If you don’t have a Dutch oven, a large stockpot should work just fine.

For the stew meat, it called for 3/4 lbs, which is kinda left up to interpretation, so we used a 4lb shoulder roast. To prep, we cut the meat into 1/2-inch to 1-inch pieces. We trimmed most of the fat from the meat too, but if you’re into a fattier bite you could leave some on! 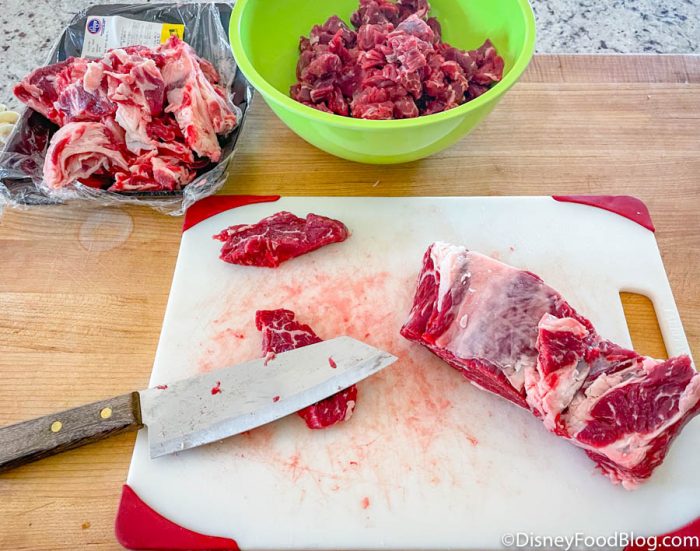 The recipe notes to add the stew meat and sauté for 10 minutes until meat is browned on all sides. We recommend doing this in batches, but we were able to get it all browned by dumping it in the pot and cranking up the heat. 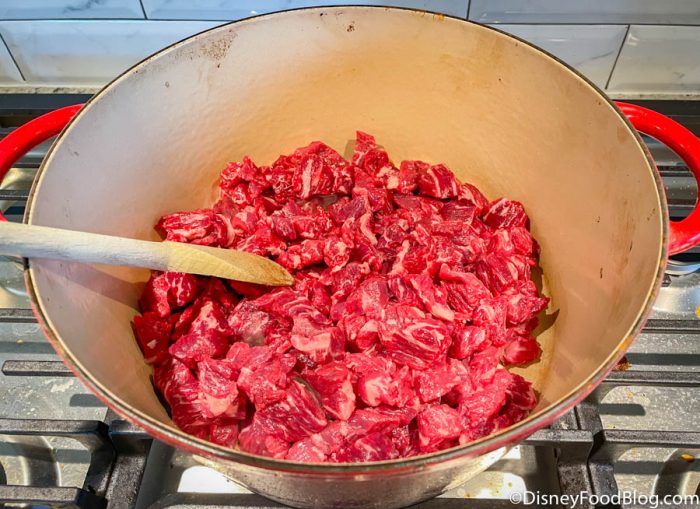 After that, you’ll want to remove the meat from your pot or Dutch oven and set it aside. 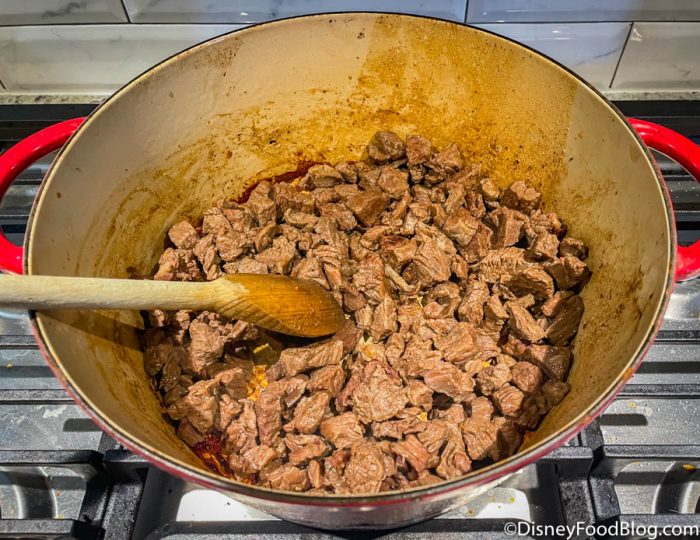 The recipe says 1 small onion but we used a large sweet onion. We also used far more than 4 cloves of garlic (probably closer to 12-15?) because 4 cloves did NOT seem like enough for the portion size. Garlic and us are like BFFs and we can’t get enough. We recommend doubling this amount or adding even more to your taste! We like LOTS of garlic. 😉 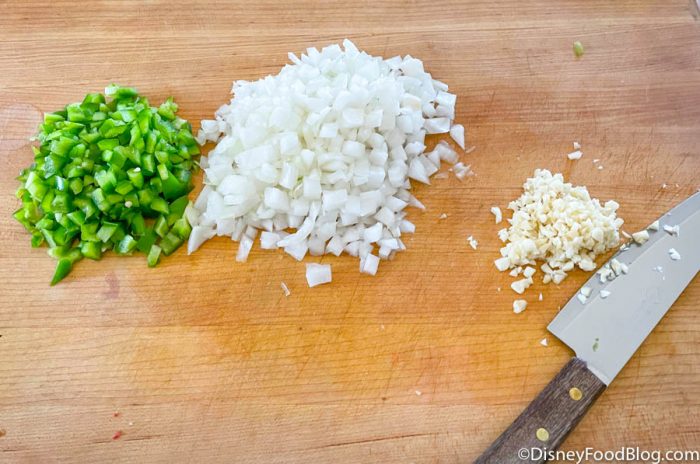 A note here, the recipe says to season with salt at the end of the recipe, but we highly recommend adding salt as you go. It’s easy to add salt and pretty hard to remove it, so show some restraint and taste as you go!

Add the remaining 2 tablespoons of oil to the pan, heat for 3 minutes over medium heat. Then, add onions and green pepper. Sauté 8-10 minutes, until soft. 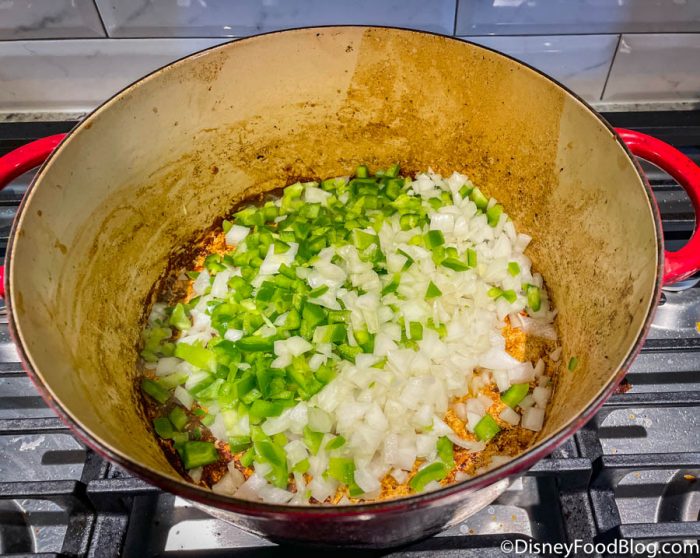 Add garlic and sauté one minute longer, until garlic is fragrant. 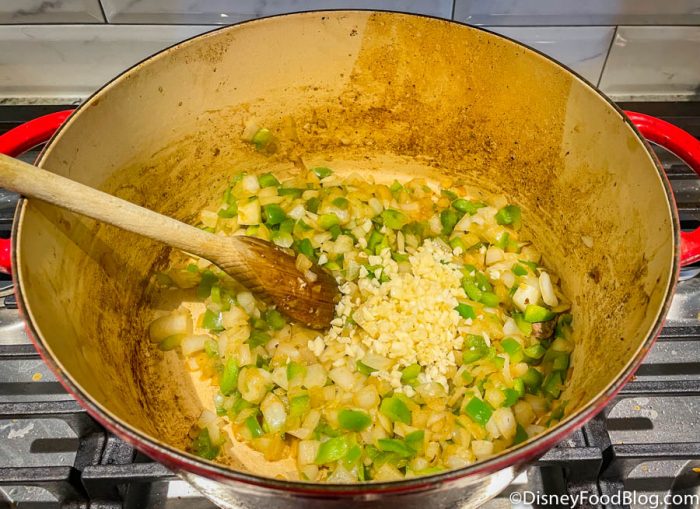 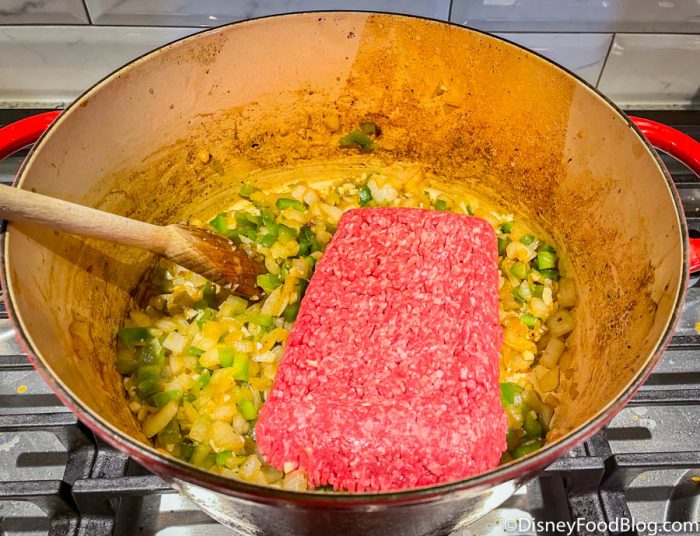 Cook, stirring occasionally to break up large chunks of beef, for 10-12 minutes, until beef is no longer pink. Drain excess fat. 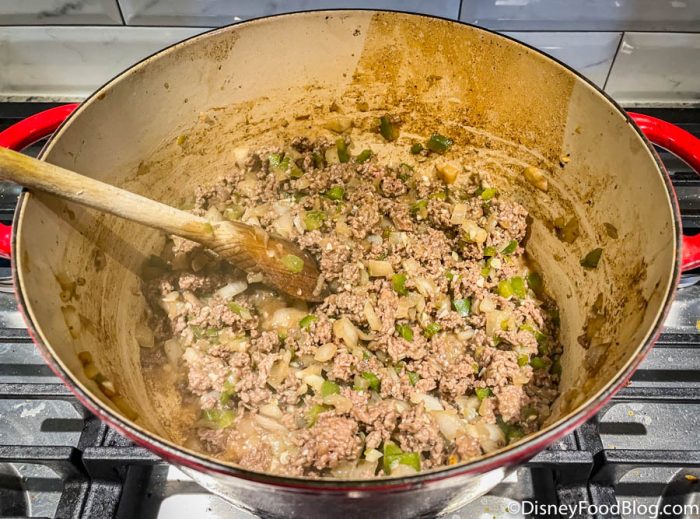 Return stew meat to the Dutch oven with ground beef mixture. Add ground cumin, chili powder, onion powder, cayenne pepper, tomato paste, fresh diced plum tomatoes, diced can tomatoes, beef base, and water. For the beef base, the jars of Better Than Boullion would be ideal here, but we used two beef bouillon cubes. We were out of onion powder too but dried onion flakes worked okay! 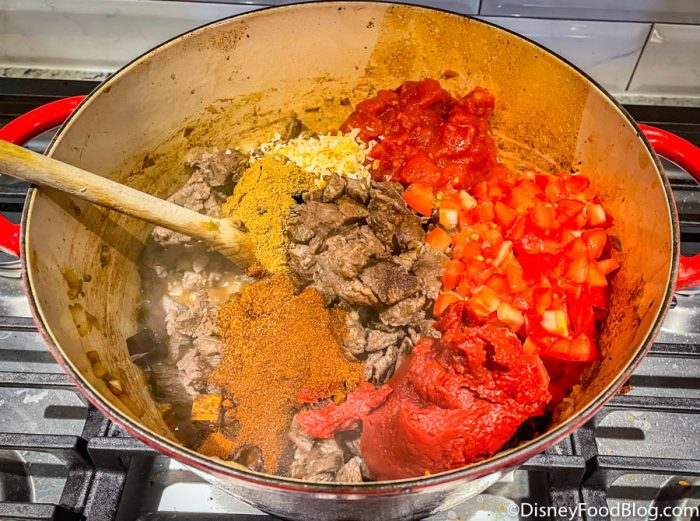 A note on the seasoning: WOW. This is some bland chili (sorry Walt and Carnation Cafe chefs!). We ended up doubling the cumin and chili powder and adding a bit more cayenne. We also ended up adding about 2 tablespoons each of coriander and paprika to spice it up a little. If you like a more flavorful chili, these additions might be the way to go when you make your OWN version of Walt’s chili!

We also cheated and added a chopped poblano pepper at this step (We know, we know, it’s not in the recipe but it tastes good. Walt was all about improving on things right? It was in the spirit of Walt.😉) 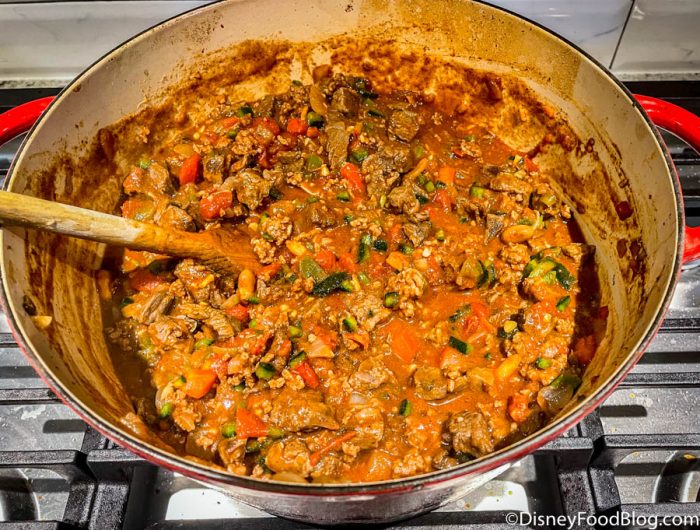 Bring chili to a simmer. Cover and simmer over low heat for 3 hours, until stew meat is tender. For us, it took about 4 hours for the stew meat to become appropriately tender. You really need to give it enough time, otherwise, you’ll be chewing through tough hunks of meat. We would’ve cooked longer if we had the time. This is a make-it-and-let-it-cook-all-day-on-the-weekend-type food. 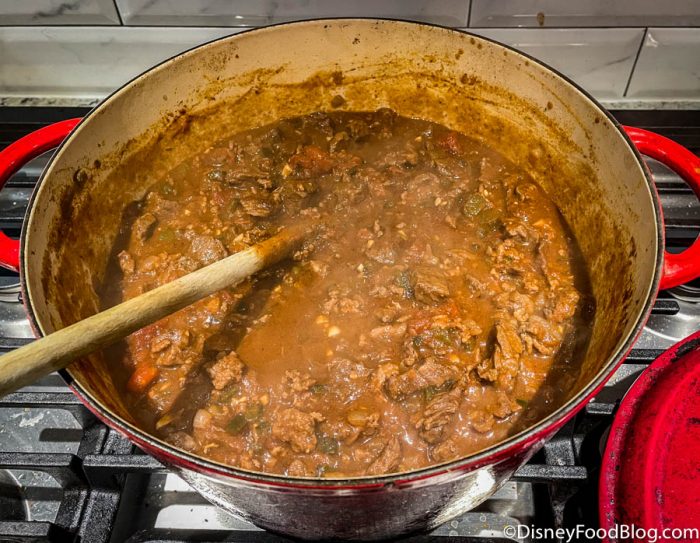 Add pinto beans. Simmer for 10 minutes, until beans are warm. 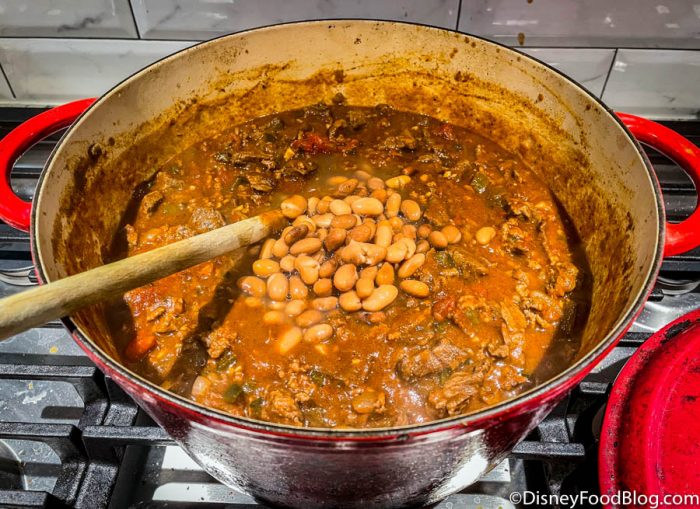 Taste and add more salt if it needs it, if not, leave it alone! We expect, like many chilis, this will taste best as reheated leftovers. 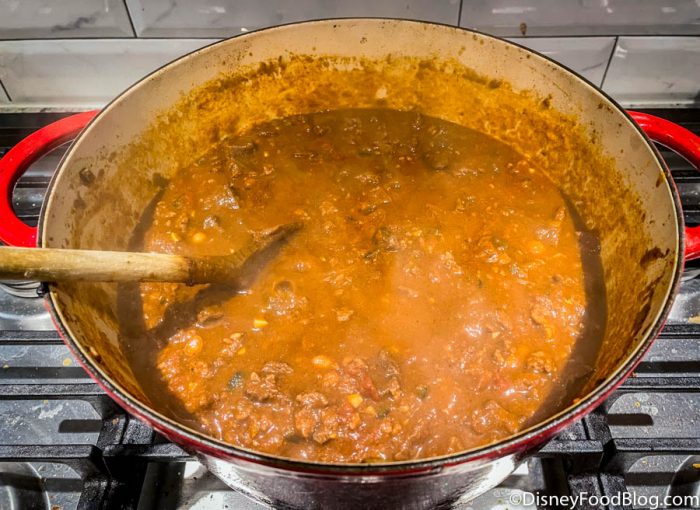 When you serve, garnish with sour cream, shredded cheddar cheese, and diced tomatoes. Don’t skip the garnish! It adds a lot to it, especially the creaminess from the sour cream. 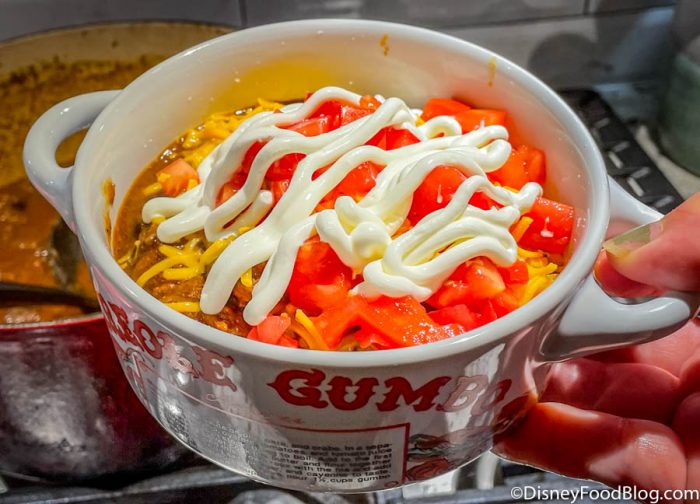 Overall it was pretty good! The bones for a good chili are there but the seasoning leaves a lot to be desired. Like we said earlier, the amount of meat was unfortunately left up to interpretation so if you like more meat it works with 3 lb. less meat, it works with 3/4. Either way, this chili was going to be bland. Walt was a mid-Western meat and potatoes kind of guy, so we can’t fault the recipe. He probably just liked what he liked. Walt’s chili started with him dumping two different styles of canned chili together and eating it up with some saltines. It’s not gourmet, it’s what he liked. Later the recipe was refined by his personal chef and that’s what we cooked and what you can find at Carnation Cafe.

We had a blast making this recipe for Walt’s birthday! You can find lots of other great Disney recipes right here on DFB, so plan out your week’s menu!

To check out another take on Walt’s Chili, click here!

Have you tried this recipe? Tell us in the comments!