There are a lot of historically significant pieces of Disney history tucked around Disney World. 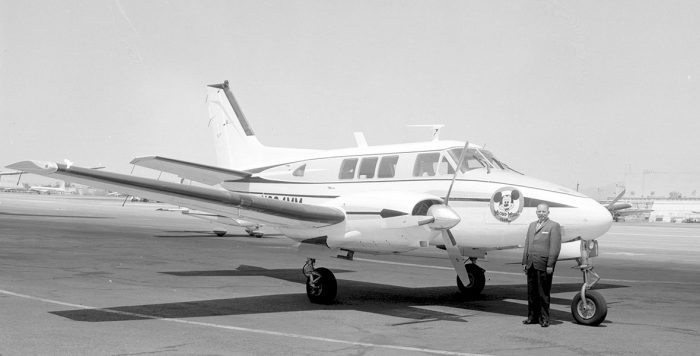 But did you know a very BIG (figuratively and literally) relic of Disney’s past sits just out of sight in Walt Disney World? Today, we’re getting a glimpse of the FAMOUS private plane that Walt Disney himself took a liking to — “The Mouse.”

Aerial looks at Walt's plane in a backstage area of Walt Disney World. It was on display in Disney's Hollywood Studios, with Mickey Mouse on the tail, as the plane looked during later general corporate use. Seems to be restored to original livery. pic.twitter.com/GZjRJUcNPC

During Walt’s career, he used three different planes during his work with the company, a Beechcraft Queen Air, a Beechcraft King Air, and the Grumman Gulfstream 1 (G1) that now sits just out of sight in Disney World, per D23. It’s well known that Walt loved trains, but did you know that the company plane was one of Walt’s pride and joys?

This plane was purchased by Walt in 1964 and he and his wife, Lillian, worked together to design the interior of the plane and the color scheme. We have to say, they went with a VERY 1960s look! At the time the plane seated 15 and had a galley, two couches, and a desk. 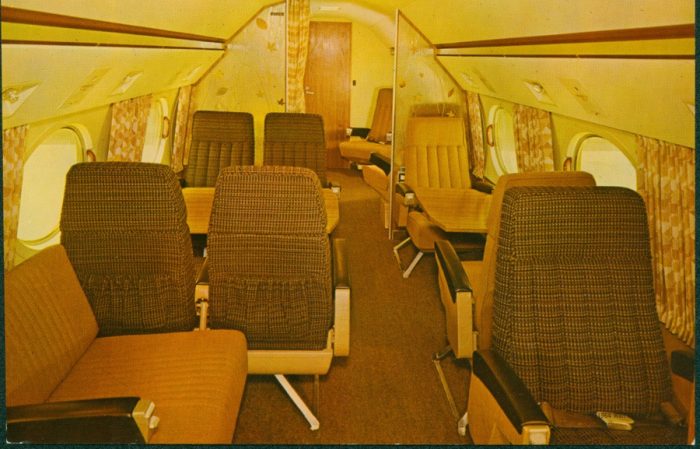 Walt even had his very own special seat designed in the rear left cabin. It had a special altimeter and air-speed gauge so that Walt could keep an eye on the plane’s status. He was SUPER curious and interested in air travel.

You may have seen this plane before if you’ve been going to Disney World for a while. It took its last flight in 1992, touched down on World Drive, and was added to The Backlot Tour at Disney’s Hollywood Studios! 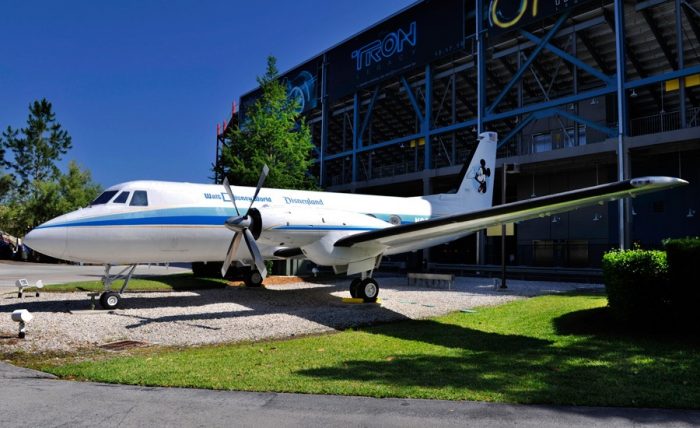 During the tour, Cast Members noted that the plane was used to fly Walt Disney on secret scouting missions over Central Florida when he was looking for the perfect spot to build a second theme park — and that’s true! 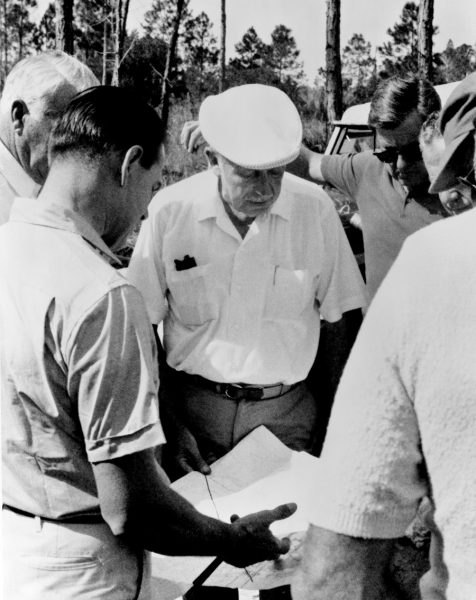 The first few flights of the plane took Walt and some Imagineers from California to New York to check in on their contributions to the 1964 New York World’s Fair like Great Moments with Mr. Lincoln, Carousel of Progress, and “it’s a small world.” Soon after, Walt began secretly surveying Central Florida as a potential location for his second theme park using the plane.

It’s SUPER cool that this plane (again, sitting right under our noses!) was used to survey the land for Disney World, but that wasn’t its only purpose. It also took Disney characters on tours and visits to children’s hospitals and several famous faces — President Richard Nixon, President Jimmy Carter, President Ronald Reagan, Julie Andrews, and Annette Funicello — have taken to the skies in “The Mouse.” 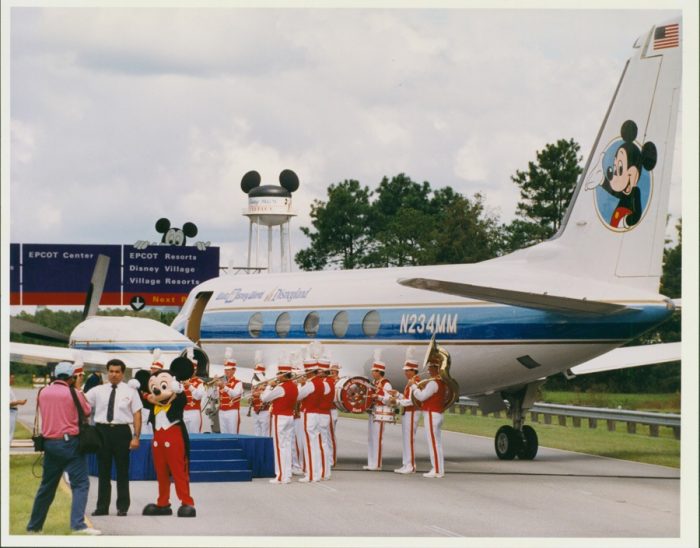 The plane has been backstage for some time, ever since The Backlot Tour closed in Hollywood Studios in 2014, but it’s not often we got such a cool glimpse like the one above. The plane is uncovered and totally visible from the skies! 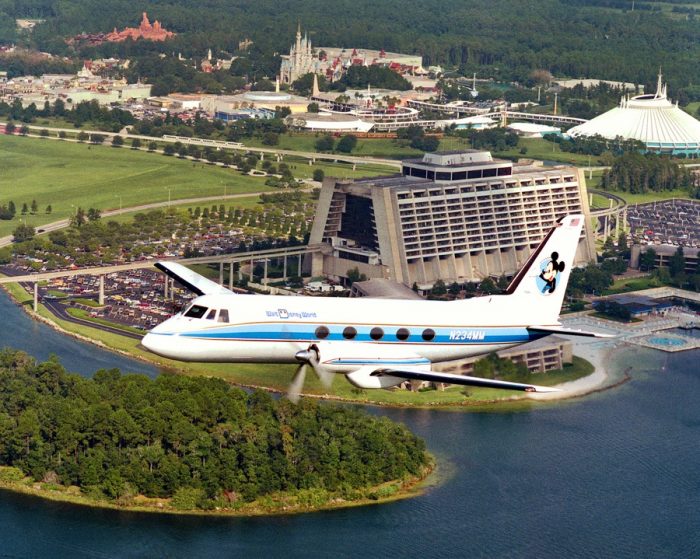 You might notice that the plane spotted from the skies today has a red stripe while the one from The Backlot Tour had a blue stripe; they’re still the same plane! The plane had a red striped when Walt flew in it but was repainted blue for Disney corporate use in the late 20th century. Now, it seems it’s been restored to its original color scheme! 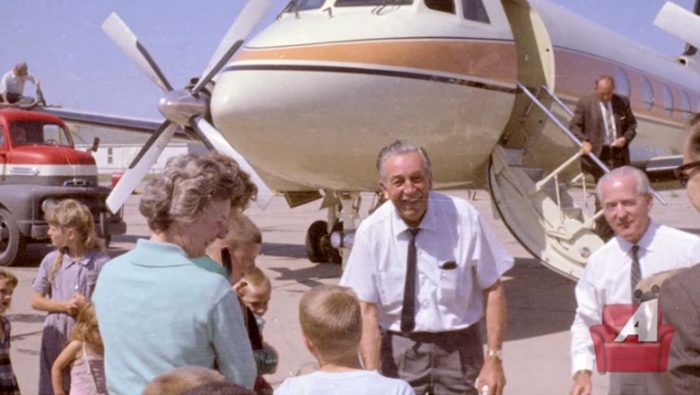 It’s very, very cool to get a peek at such an iconic piece of Disney history. Maybe one day it will return to a spot where guests might see it. As always, keep an eye on DFB for the latest updates from Disney World!

What do you think of the story of Walt’s plane? Tell us in the comments!

« PICS: A NEW Navy Blue MagicBand Is Now Available in Disney World
What’s New at EPCOT: LOW Crowds, a Live Musician, and a 20-Minute Wait for Frozen Ever After! »