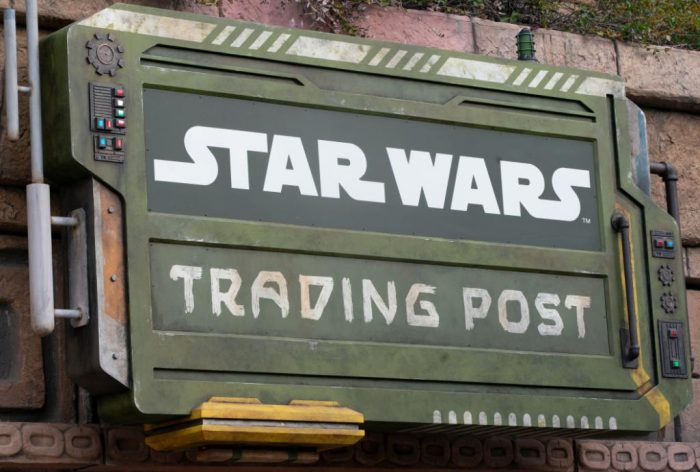 Unlike Galaxy’s Edge, the jungle base storyline will be placed outside of the limits of the Star Wars timeline, so you’ll be able to buy merchandise from all different Star Wars eras! As Star Wars fans ourselves, we can’t wait to visit this place! The new location of the base is actually the former home of Rainforest Cafe at Downtown Disney. So, how exactly did Disney transform the rainforest into a jungle from another galaxy?

According to The Orange County Register, a lot of detail has gone into repurposing the temple into a believable Star Wars base. What once was a restaurant… 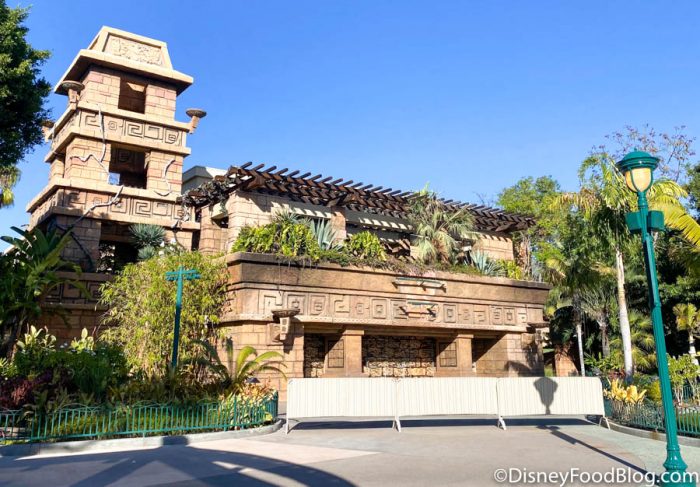 …is now a “funky jungle temple” that is being used by the Resistance! Walt Disney Imagineering Art Director, Kristin Makela gave some insight into how they are transforming the space saying that they wanted it to feel like “one of those clandestine places you may find in Star Wars adventures.” 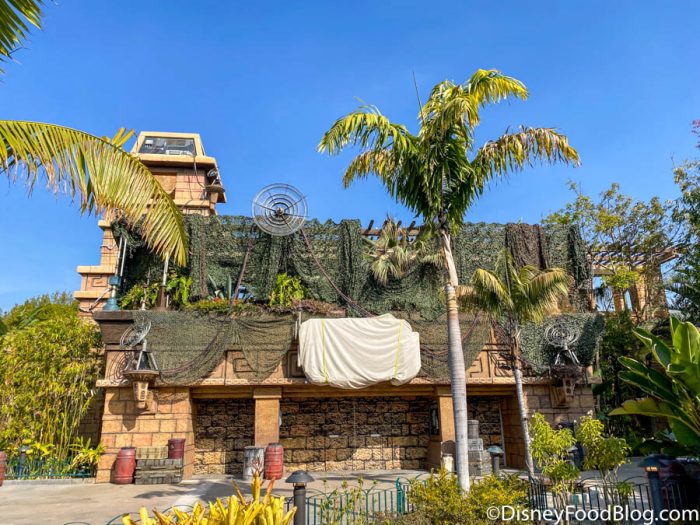 Disney Imagineers weren’t starting with an open plot of land, instead, they had a building already in place that needed to be renovated into a completely new story. Makela said that they wanted to bring the emotions from the adventures of Star Wars to life so that guests could feel that they were going to a “unique place where you don’t know what stories are going to unfold.” 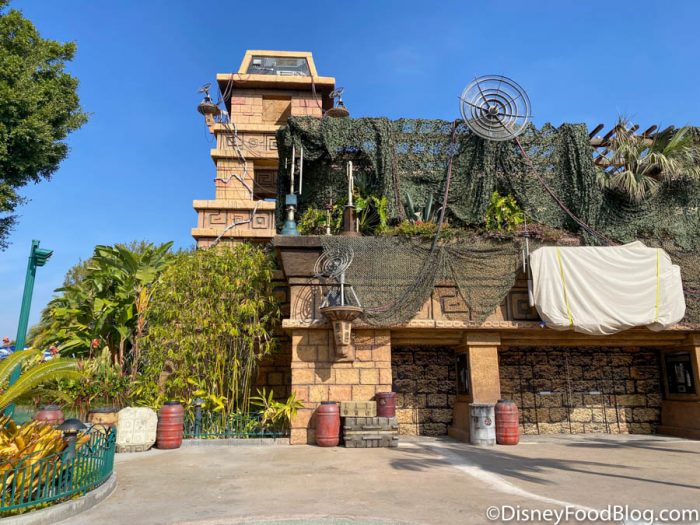 And the transformation is already underway at Downtown Disney! On the exterior, you can spot satellite antennas, exhaust fans, and electrical panels camouflaged on the temple. 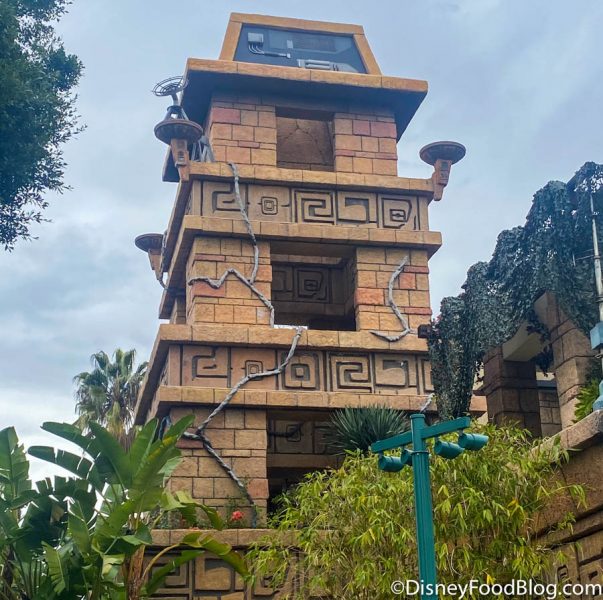 And, the outdoor balcony has had cable wires and camouflage netting tossed over it to keep the base hidden from intruders. Honestly, tossed may be the wrong word for it because the Imagineers who are designing the space pay close attention to every little detail. In discussing how Disney is creating a believable storyline at the store, Makela said “Star Wars is really the sense that 80% of it is based on real-world design aesthetics and 20% is twisted into Star Wars.”

The recognizable elements are meant to ground guests into the Star Wars story, but the more unique details are what transport them into the center of a Star Wars movie. 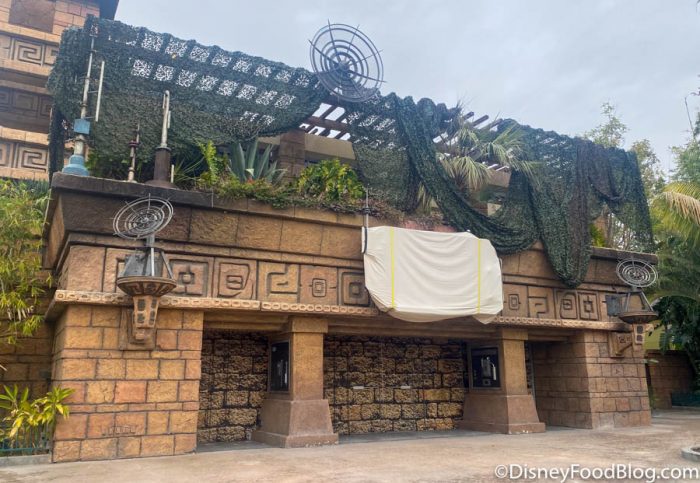 And, the exterior isn’t the only component of the store’s Star Wars makeover. Many fan-favorite Star Wars characters are being built into the decor itself. Rey’s Speeder sits outside in front of the trading post, and inside fans will spot Baby Yoda’s form of transportation — his pram! 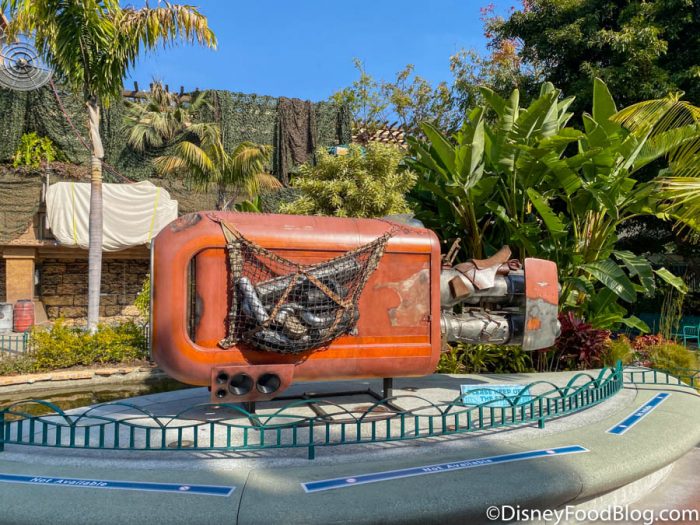 From making the exterior feel like an authentic Resistance base to adding Star Wars props to the interior, fans are in for a treat when they come to shop the merchandise from the galaxy! As of right now, the store is the only Star Wars transformation officially planned for Downtown Disney, but there is certainly space for something like a Star Wars Cantina in the future (but that has not been announced at this time).

Currently, Legacy Passholders can sign up to be the first travelers from February 16th through February 18th. The trading post will then open to everyone on February 19th. Stay tuned for more Disney news and updates!

Will you be visiting the Star Wars Trading Post? Let us know in the comments!