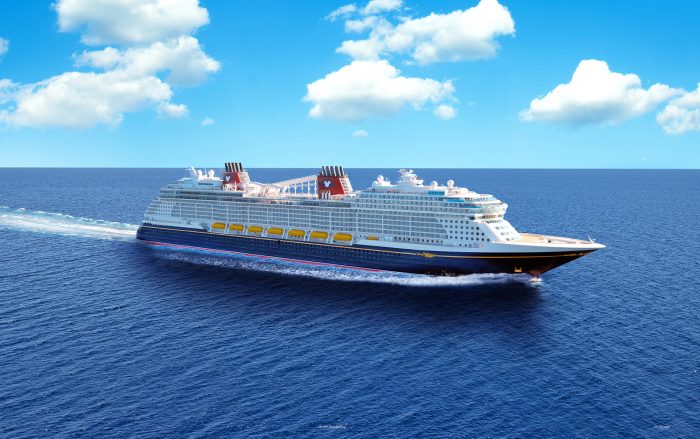 The Disney Wish will set sail on June 9th, 2022, and we could NOT be more excited. We’ve already learned lots about what characters we can see, what the rooms will look like, and so much more. We’ve also told you about all the dining options you can expect onboard…and there are a LOT of ’em. So we’re breaking it all down for ya!

The ship will feature three family-friendly dining experiences. Let’s dive into those first!

Arendelle: A Frozen Dining Adventure is Disney’s first-ever Frozen-inspired restaurant — and it promises TONS of fun! Guests will attend Anna and Kristoff’s engagement party, which is catered by Oaken’s “Hearty Party Planning Service… and Sauna” and features plenty of live performances. 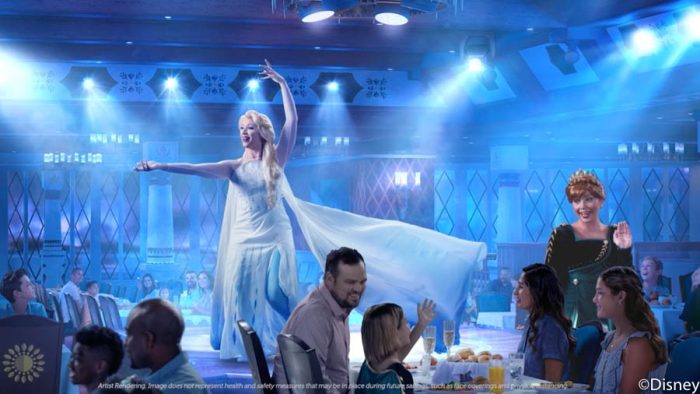 The “theatrical dining experience” lets you interact with Anna, Elsa, Kristoff, and Olaf — and you’ll encounter some pretty cool special effects! As for the food? It’s “world-class cuisine” with Nordic influences. Sounds exciting! 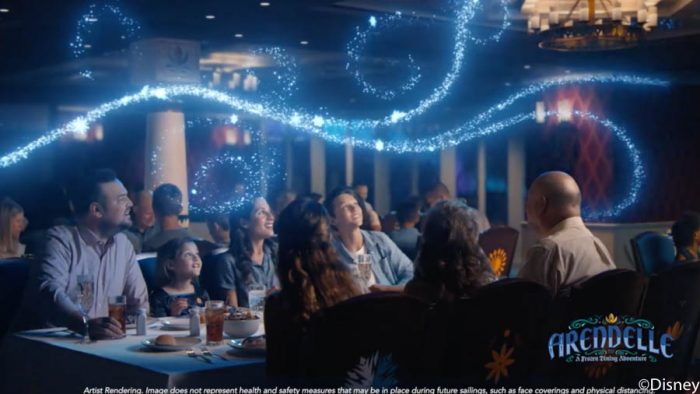 A ton of Frozen fun while you feast? Sign us up!

You’ve heard all about Disney’s first Frozen restaurant…but how about its first Marvel restaurant? Worlds of Marvel will be Disney’s “most ambitious dining experience ever.” It puts YOU right in the middle of your own superhero adventure! 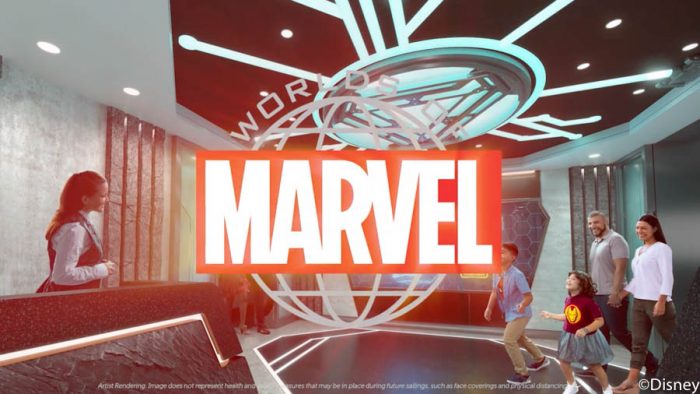 You’ll play a big part in an interactive Avengers mission…with a surprise appearance by an “infamous foe!” While you live out your Marvel dreams, you’ll munch on food inspired by the Marvel Cinematic Universe. That includes dishes based off of Wakanda, Sokovia, and New York City! 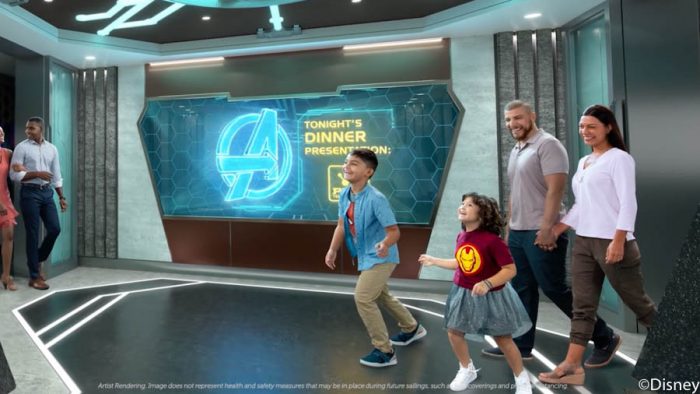 We love the idea of an “attraction” combined with a meal. We’ll keep ya posted as we hear more details!

Learn More About Worlds of Marvel!

The third restaurant is 1923, and it takes guests on a journey through the evolution of animation! Named after the year The Walt Disney Company was founded, 1923 will serve up California eats that are light, fresh, and flavorful. 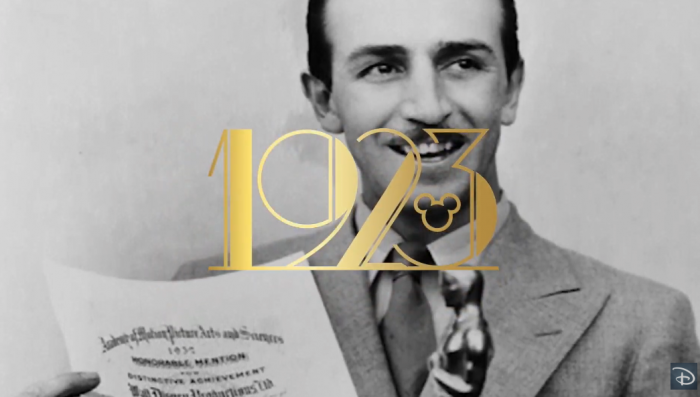 While you eat, you’ll be surrounded by over 1,000 props and pieces of artwork, showing how The Walt Disney Company came to be what it is today. And as a tribute to the men who started it all, you’ll dine in either the Walt or Roy Disney room! 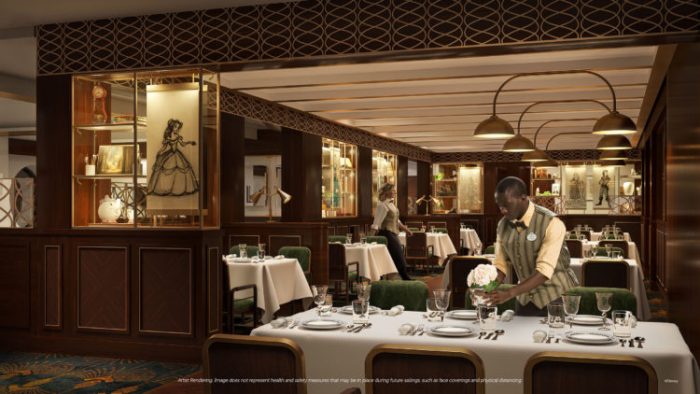 This Hollywood-inspired restaurant will be elegant with “a dash of Disney whimsy.” We can’t wait to try it for ourselves!

Marceline Market is a spot inspired by international marketplaces all over the world with 10 food stations (each themed to a Disney animated film), and a cafe-style beverage bar in the center. 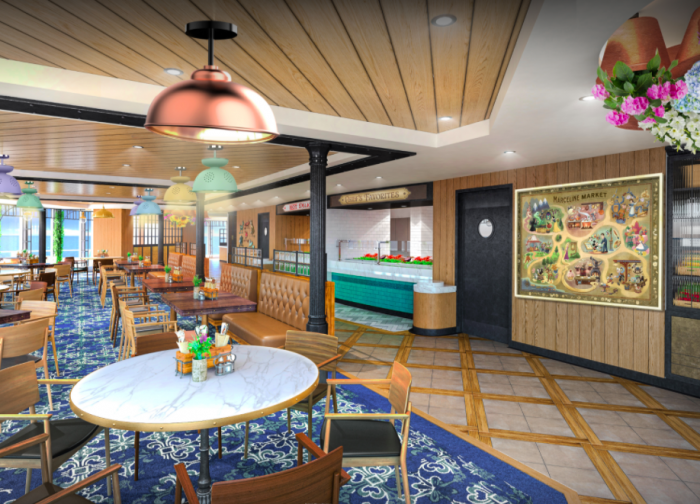 At each station, menus will feature specials that change throughout the voyage, including seafood, comfort foods, bakery items, classic American dishes, vegetarian options, soups, salads, and more! The Marceline Market will be a “walk-around” style of dining for breakfast and lunch, and then the market will be converted to table service for dinner.

Find out more about the Marceline Market here!

Mickey & Friends Festival of Foods will be located on one of the upper decks of the Wish with several different restaurants including Mickey’s Smokestack Barbecue, Donald’s Cantina, Daisy’s Pizza Pies, Goofy’s Grill, and Sweet Minnie’s Ice Cream.

Did you know these spots include Disney Cruise Line’s first-ever quick-service barbecue and Mexican-inspired spots?!

Click here to find out more about the Festival of Foods!

Adults will also be able to experience a suite of 3 adult-exclusive dining experiences inspired by Beauty and the Beast! While Disney hasn’t revealed too many details on these areas just yet, we do know that there will be a spot called The Rose to sip on a before or after-dinner cocktail. The Rose will be located at the entrance of Palo Steakhouse and Enchante). 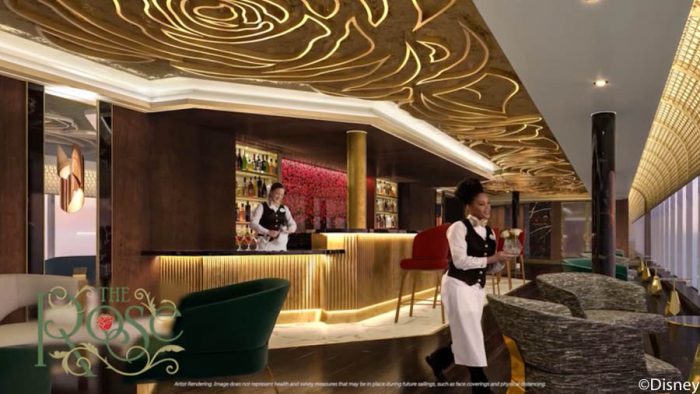 The Rose will have an extensive collection of wines and liquors. According to Disney, at The Rose “guests will also indulge in a special menu of gourmet amuse-bouche and small plates from the Enchanté galley, curated by Chef Lallement.”

Another signature spot will be Palo Steakhouse, inspired by Cogsworth. Palo Steakhouse will also feature “A private dining room will be available for more intimate gatherings of up to 12 guests.” 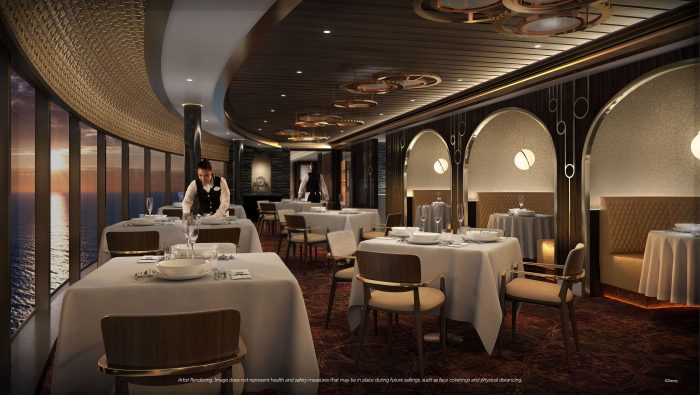 What will be on the menu? According to Disney, “guests will choose from a selection of exquisite Italian dishes and the world’s best steaks, from the most elite American prime cuts to melt-in-your-mouth Australian wagyu to succulent Japanese Kobe and Miyazaki beefs.” There will also be Italian wines and craft beers available. ­For dessert, Palo’s signature chocolate souffle will be available!

Adults will also get to dine over at Enchanté, inspired by Lumière! Enchanté will be the ship’s most elegant dining experience, featuring a gourmet menu by three-Michelin-starred Chef Arnaud Lallement. It’s just what Lumière would want! 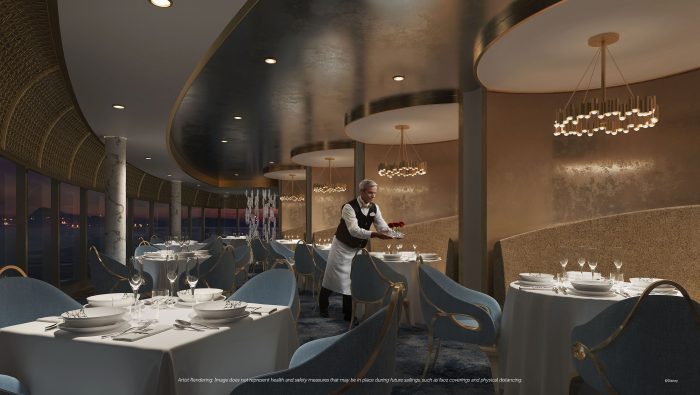 There will be “two intimate dining areas and [a] private 10-seat dining room.” What will be on the menu here? According to Disney, “the menu will feature superior products and seasonal ingredients sourced from around the world to create an exceptional ensemble of international dishes.”

These spaces will all be part of an adult-only retreat located on the upper deck of the ship. Disney has also noted that Palo Steakhouse and Enchante will be “joined by an outdoor terrace overlooking the ocean.” We’ll keep you posted as we learn more!

Star Wars: Hyperspace Lounge is a family-friendly watering hole by day…but by night it “jumps to lightspeed” to become an adult-only space! It’ll serve up “signature beverages inspired by the films,” and you’ll also get a chance to participate in interactive tasting experiences. 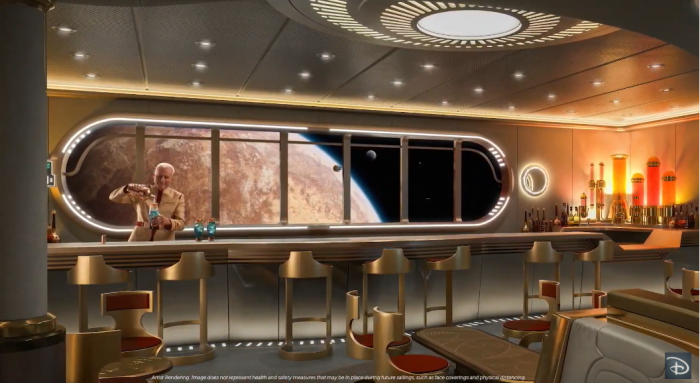 There’s a lot of cool tech going into this lounge. The virtually-enhanced space will transport guests through hyperspace to iconic Star Wars locales like Tatooine, Batuu, and more. You’ll watch sensational scenes through a panoramic viewport! 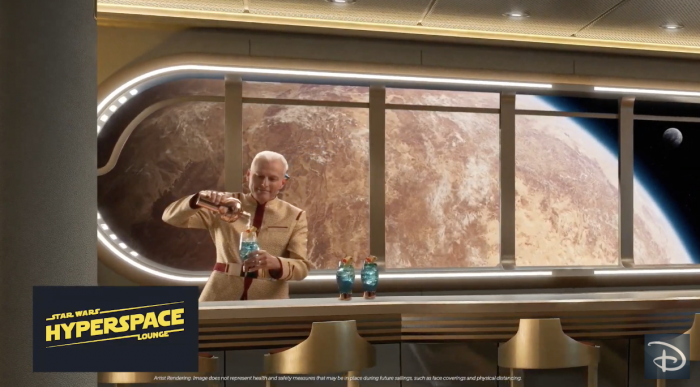 Disney also hinted at some “robotic magic” here but hasn’t released any more details. But boy are we excited to find out what that means!

Keg & Compass is a classic Disney Cruise line pub with inspiration from the architectural style of a late 1800s Norwegian sailor’s map room and the rich folklore of Norse seafaring. 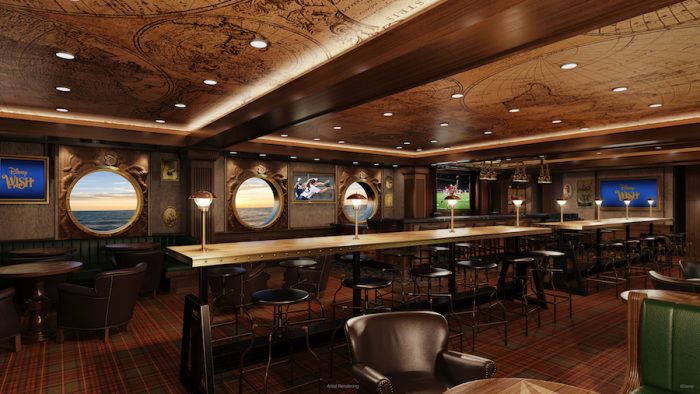 This spot will be a great location to watch live sports, news, and major broadcast events while sipping on a specialized selection of beers (including three custom craft brews available exclusively aboard the Disney Wish!), liquors, wines, and cocktails.

Nightingale’s is a piano bar inspired by the rendition of “Sing Sweet Nightingale” sung in Cinderella. It will sit just off of the lobby and act as somewhat of an extension of the fairytale-inspired Grand Hall. 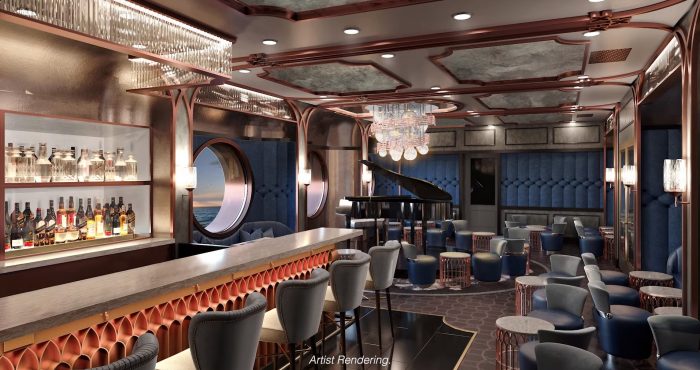 Expect an extensive menu of fine wines and hand-crafted cocktails.

Adults have also got The Bayou, an informal lounge themed to (You guessed it!) The Princess and the Frog! And, big plus, this spot will feature live entertainment and musical performances! 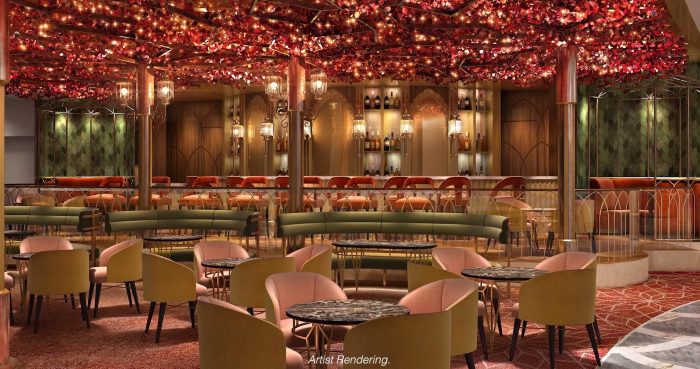 As for the offerings, we’ll be sipping and snacking on creative cocktails, specialty coffees, and signature beignets.

Quiet Cove, an adults-only district with a pool, whirlpool spa, and more, will have two dining offerings. The first is Cove Bar, an open-air spot to grab beer, wine, and cocktails. 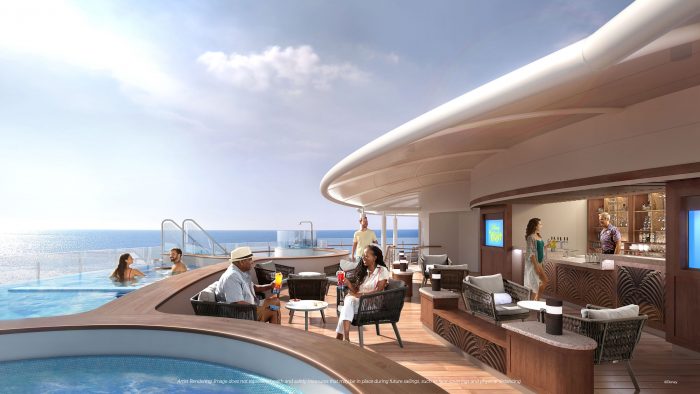 We’ll also see the return of Cove Cafe, a popular feature on other Disney Cruise Line ships! This poolside lounge will have specialty drinks and treats, with a Moana-inspired theme.

The ‘Wish’ is going to have a brand new candy shop called Inside Out: Joyful Sweets. This dessert stop is inspired by the Pixar film, and inside you’ll find sculptures of the five emotions: Joy, Sadness, Disgust, Fear, and Anger. The shop will also be decorated with glowing Memory Orb lights and other features that make it look just like the control center in Riley’s head from the film. 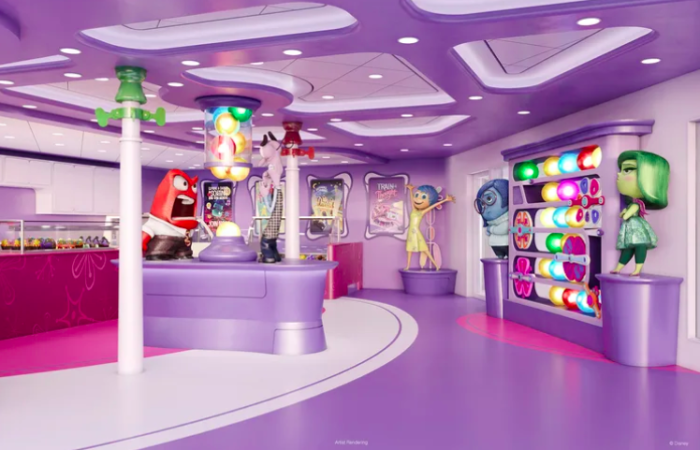 There will be more than 40 flavors of gelato and ice cream (🤩) along with hand-made toppings like whipped cream, fruit competes, and sauces. Among the flavors that have been revealed so far are Peanut Butter Pretzel and White Chocolate Raspberry. You’ll also be able to find cupcakes that are themed to each of the five emotions: There’s a lemon one for Joy, a blueberry one for Sadness, a pistachio one for Disgust, a red velvet one for Anger, and a bubblegum one for Fear. 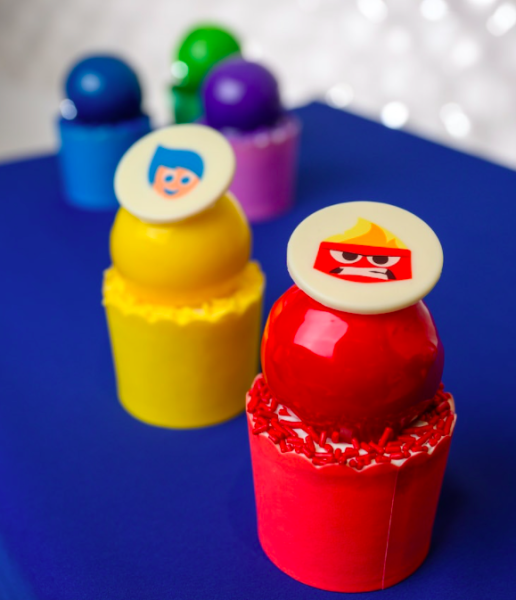 Other offerings include cake pops, handcrafted truffles, brownies, macarons, designer cookies, all kinds of candy, and Chocolate Memory Orbs (which you’ll break open to find candy inside)! Similar to the ship’s lounges, these treats will be available at an extra cost.

Click HERE to check out MORE of Inside Out: Joyful Sweets! 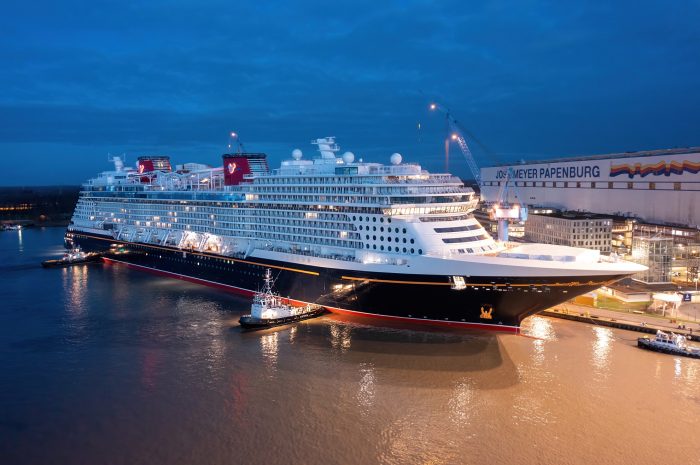 The Disney Wish will set sail on July 14th, 2022! We’ll keep ya in the loop as we get ALL the details — and continue to update this post as more dining spots are announced — so stay tuned to DFB!

Learn About the Cool New Ride Coming to the Disney Wish!

Which restaurant are you most excited to try? Let us know in the comments!

« All of the Shows, Theaters, and Entertainment Spaces Coming to the Disney Wish Cruise Ship!
Check the Mail — Disney World Annual Passholder Magnets Are Arriving! »