Tucked into the West Side of Disney Springs is a rustic wooden building rocking with music! 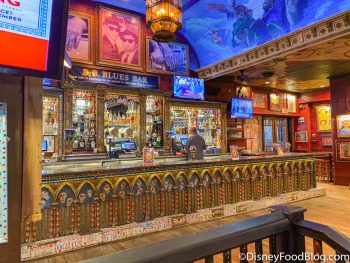 House of Blues is one of Disney World’s many nightspots and brings in chart-topping live music year-round.

Southern fare (and daily drink specials!) are on the restaurant menu here. Try the jambalaya and voodoo shrimp. (We also highly recommend the Toffee Bread Pudding for dessert!)

The spot is well-known for being host to a Gospel Brunch on most Sundays as a special-ticket event. A Bayou Brunch is served on Saturdays and Sundays, too. And the Front Porch Bar outside also boasts live music!

Lunch and dinner are served everyday, Brunch is also served on Saturdays and Sundays. The menu is Southern cooking tinged with some creole style.