Steakhouse 71 is a NEW restaurant on the way to Disney’s Contemporary Resort! The “71” is a nod to the opening year of Walt Disney World and the restaurant itself is slated to open on October 1, 2021, which is the 50th Anniversary of the Resort! 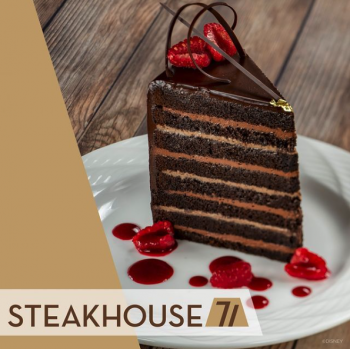 Steakhouse 71 will offer casual dining for breakfast, lunch, and dinner (with varying menus for each meal and a steakhouse focus in the evenings) just steps away from the Magic Kingdom.

And if you opt for dessert (which is always a good idea),  you may want to try the Steakhouse 71 Chocolate Cake, made with “15 layers of whiskey-infused chocolate cake, chocolate mousse, and raspberries – one layer for every floor at Disney’s Contemporary Resort.”

The accompanying Steakhouse 71 Lounge will also provide a spot to enjoy a few bites and unique cocktails.

Type of Food: American, Steakhouse focus in the evenings

Disney Dining Plan: Not yet known

Tables in Wonderland: Not yet known

See ALL of the dining options at Disney’s Contemporary Resort HERE!