We’ve got a new refreshment for you to try in Hollywood Studios at Hollywood Scoops!

Hard root beer floats have been popping up EVERYWHERE recently around the World – including Beach Club’s Beaches and Cream and Epcot’s Fife and Drum, not to mention the upcoming Epcot Food and Wine Festival!

Now, Hollywood Studios is joining in on the fizzy fun! Hollywood Scoops, if you’re not familiar, is a tiny, early 1900s style house on Hollywood Boulevard just before Tower of Terror and Rock ‘n’ Roller Coaster. When you get tired of all those Mickey Premium Bars (HA!), Hollywood Scoops is known for serving hand-scooped ice cream sundaes and other chilly treats. The line gets pretty long when it’s hot out, and after adding this delicious treat, we wouldn’t be surprised if it gets longer! The float sells for $12, which may sound steep, but it’s served with a full bottle of Coney Island Hard Root Beer and two big scoops of vanilla ice cream! (And, honestly, most alcoholic drinks around WDW are going to run you between $10-$15 these days.) It’s a larger portion than the Epcot version, and it’s my favorite! I think the Coney Island Hard Root Beer has a less alcoholic taste than the Not Your Father’s Root Beer, which makes this more like a traditional float. I’m happy to see this treat in Hollywood Studios. It’s the perfect way to cool off (and take the edge off after telling your kids to keep their hands to themselves for the last half-hour) in the dog days of summer! 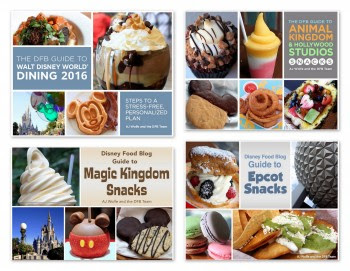 Just looking for all the Snacks in Animal Kingdom and Hollywood Studios?

Then check out our DFB Guide to Animal Kingdom and Hollywood Studios Snacks, newly updated for your 2016-17 trip!

With comprehensive information and advice on well over 340 delicious snacks that you can enjoy at the Animal Kingdom and Hollywood Studios parks, you’ll always be in the know! And for a limited time only, we are offering the Guide for 20% off!

To secure the discount, use code SNACKS16 at check-out.

Have you tried a Disney World hard root beer float yet? What did you think?!

« News: Win a Trip to the Epcot Food and Wine Festival from The Chew! Plus — How to Get Tickets to the Live Taping!
Review and Photo Tour: The New Flying Fish at Disney World’s BoardWalk »