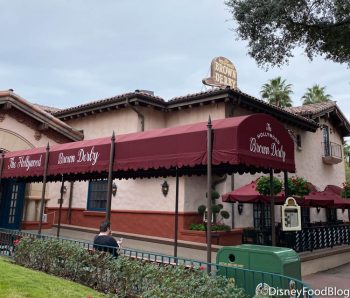 Owing to this, the park boasts eating establishments that are inspired by the same era. From the Sci-Fi Dine-in, which is based on a drive-in movie theater “under the stars”, to the 50’s Prime Time Cafe which is designed to be reminiscent of Mom’s Kitchen, several the restaurants evoke a different time and era… right down to the park’s Starbucks location, The Trolley Car Cafe. It is also home to the most “upscale” of the restaurants in any of the theme parks: The Hollywood Brown Derby.

And, of course, you can go beyond Hollywood… and dine on the planet Batuu, by way of Star Wars: Galaxy’s Edge.

Simply click on any of the links below to learn more about each restaurant, and find all of our dining reviews for that location! And keep scrolling to find a few of our DFB YouTube Videos dedicated to Disney’s Hollywood Studios.

We’ve got entire videos dedicated to dining — and more! — at Disney’s Hollywood Studios on our DFB YouTube Channel! Below are just a few to get you started…