Hollywood & Vine offers a full Buffet for Breakfast, Lunch, and Dinner with an extra helping of FUN thanks to the presence of Disney characters! 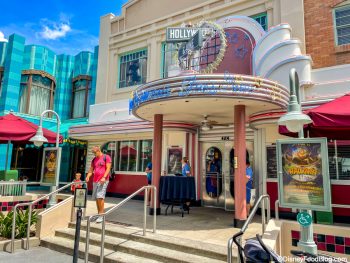 Party down with the Playhouse Disney Characters during Breakfast as you chow down on some great food at the Disney Junior Play ‘n Dine Breakfast! Though characters may vary, Fancy Nancy, Vampirina, Doc McStuffins, and Roadster Goofy are often your hosts for this high-energy a la carte breakfast!

Lunch and Dinner at Hollywood & Vine is also a character meal; however, rather than the Disney Junior characters, these mealtimes feature Minnie’s Seasonal Dine. Minnie Mouse is the hostess for various “dinner parties” throughout the year, and she’s often joined by Mickey, Goofy, and Pluto!

The theme of Minnie’s Seasonal Dine changes throughout the year, with a tribute to the Silver Screen kicking off the year (January 6th – March 15th, 2023), followed by the Springtime Dine (March 16th – May 24th, 2023). A beach party scene is set for the year’s Summertime Dine (starting May 25th, 2023 — typically through mid-August) followed by fall’s Halloween Dine (typically mid-August – early November) and the holiday season’s Holiday Dine wraps up the year! STAY TUNED FOR MORE 2023 DATES!