The Orange County Economic Recovery Task Force is made up of several committees that discuss opening procedures for different business models within the county.

Today, we tuned into meetings of two of those sub-committees — the Reopening Business Work Group and the Bringing Back Tourism Work Group. Both of these committees are working hard on recommendations for the county government that will potentially help businesses, large and small, return to work. Here’s what they discussed today and how it could affect theme parks and restaurants.

Both meetings featured a guest, Kelley Teague, the Director of Legislative Affairs for the Orange County Government. She led a discussion of Governor Ron DeSantis’s Safe. Smart. Step-by-Step. Plan for Florida’s Recovery. Teague explained at both meetings that local authorities can adopt more strict regulations than the executive order but not less strict. 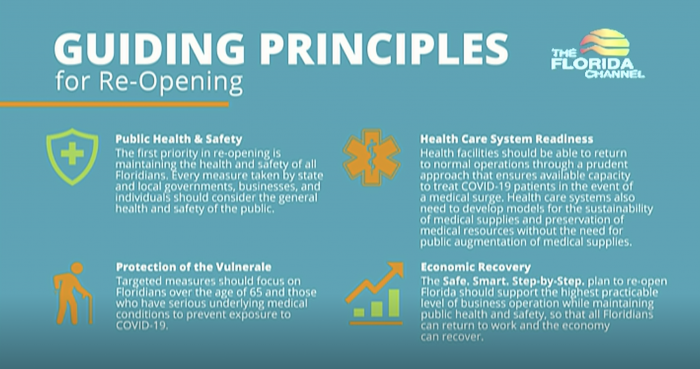 Some committee members expressed concerns about the “vagueness” of the plan and Teague explained that more details are still being fleshed out. Regardless, the Governor commented that he expects Phase 1 (beginning May 4th) to last weeks not months.

On the other hand, any progression of data showing that there is a spike in the health crisis during a phase could result in regression. They discussed that when Phase 1 does end, that’s when tourism elements will most likely begin to return to the Florida economy.

Both groups also discussed some measures that restaurants will need to take during Phase 1. These measures include limiting capacity to 25% and separating tables. Interestingly enough, it was mentioned that capacity limits do NOT include employees in a restaurant environment.

Burns explained that, like the Governor’s plan, these are minimum recommendations and individual businesses are welcome to add on to their protocols.

Members of the Tourism Group brought up that many larger resorts, such as Disney, have retail and dining components that could potentially open in Phase 1 even though theme parks are set to remain closed through at least Phase 2. To this, Teague responded that components of a large resort should be treated individually from the whole.

The groups also mentioned that the main goal for many of the committee members is to make people feel safe, including their customers. The workgroups are floating several ideas to increase consumer confidence such as a verification system that asserts when a business is following safety protocols. They also discussed making safety fun — much like we’ve seen Disney do with today’s mask sales.

Though Disney did not speak in either meeting, the company was mentioned. Jesse Martinez from Alfond Inn said that “Disney and Universal opening will open the flood gates” for other tourism businesses. A representative from Wyndham stated that “Without Disney open, we would never operate at 100% supply” for their timeshares.

Tomorrow, Mayor Demings is set to make an official announcement on Orlando’s next steps. We will continue to update you as this story unfolds.

Click here to learn more about recommendations for the Governor.

What do you think of today’s work group meetings? Tell us in the comments.

« Universal Studios to Officially Implement Employee Temperature Checks
A Live-Action Remake of Disney’s Animated Film ‘Hercules’ Is in the Works! »