Disney later shared info regarding when Disney World planned to reopen their hotels.

In this statement posted on Disney World’s website yesterday, we found out Disney Vacation Club resorts would be reopening to Members and guests on June 22nd.

But there was some confusion ensued over the wording of the first sentence which stated, “Pending approval from government officials, the phased reopening plans we submitted calls for Walt Disney World theme parks and Disney World Resort hotels to open beginning July 11th.”

We chatted with a Disney World Cast Member today who confirmed that they do not have any information about Resorts other than the ones that are opening on June 22nd. 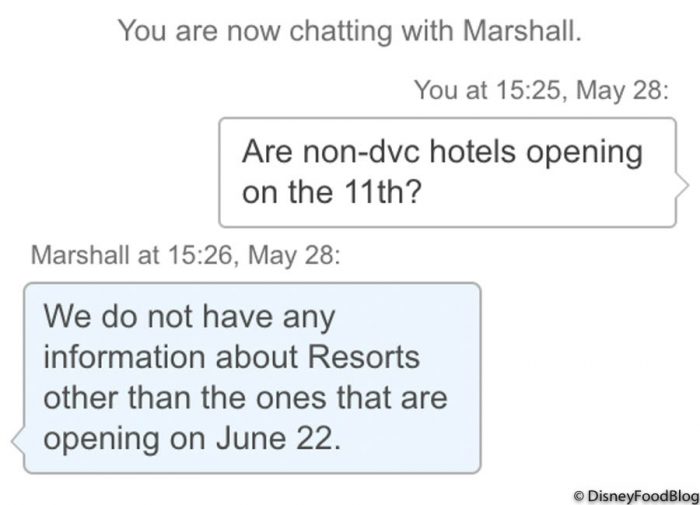 Currently, this is all the information Disney has shared about when they expect their hotels to reopen. At this time, guests cannot make new hotel or dining reservations and they are unable to purchase tickets while Disney works to implement their new reservation system.

Read all about the NEW reservation system here.

We will let you know more information as it is released.

Are you a DVC member? Did you book a room? Let us know in the comments below!

« House of Blues in Disney World Is “Opening Soon.” Get All the Details on Their New Health and Safety Protocols HERE
Find Out Where There’s a $5 ALL DAY Happy Hour in Disney World RIGHT NOW! »