Disney World and Disneyland have LOTS of construction planned for multiple attractions and experiences around the parks over the next few years (we can’t wait to see the new The Princess and the Frog ride). 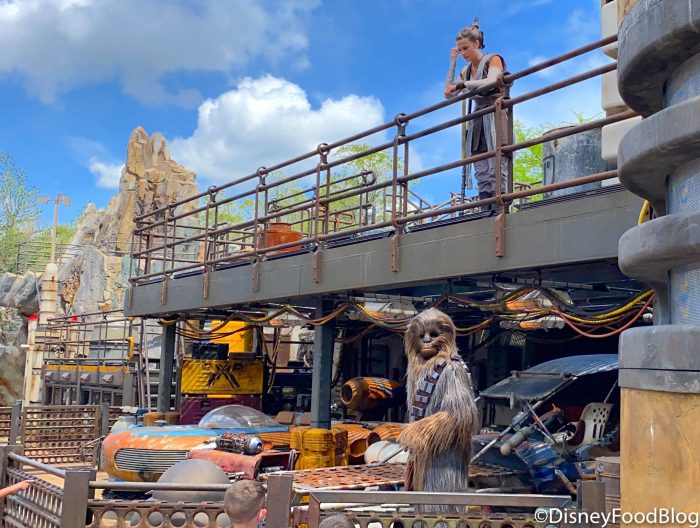 Construction has just started to pick up in the parks after the closures, with other projects being postponed until later dates. However, Disney continues to be one step ahead in planning the next big thing coming to the parks. And, there might be an entirely new line of space cocktails that could come with the creation of Disney’s next bar!

According to the Orange County Register, LucasFilm’s ILMxLAB and Walt Disney Imagineering have given Star Wars fans a sneak peek at a potential new bar that could eventually make its way into Star Wars: Galaxy’s Edge!

The new “Star Wars: Tales from the Galaxy’s Edge” virtual reality experience expands on the story of Batuu’s Black Spire Outpost with brand new characters and locations. One of the places shown in the concept art is Seezelslak’s Cantina, which is run by a six-eyed Azumel alien who overeats, acts a bit dramatic, and has a “love-hate relationship with porgs.”

Seezelslak is somewhat recognizable since he is the same species of alien playing sabacc with Han Solo and Lando Calrissian in Solo. The new character gives his visitors and customers insight into the land by telling stories about things happening around Batuu. Bobby Moynihan from Saturday Night Live voices the wild Seezelslak in the virtual reality experience.

“Star Wars: Tales from the Galaxy’s Edge” places Seezelslak’s Cantina next to Oga’s Cantina as a U-shaped bar with large cocktail vessels. The bar has been overrun by porgs that Seezelslak tries to get rid of constantly.

Although Disney hasn’t announced any plans to update Galaxy’s Edge just yet, the release of the virtual reality experience later this year might open up new ideas for stories, characters, and locations around the lands in Disneyland and Disney’s Hollywood Studios!

Read about our readers’ opinions on face characters wearing masks in the Disney World here!

Have you been to Star Wars: Galaxy’s Edge before? Let us know in the comments below!

« These NEW Haunted Mansion CROCS in Disney World Are to DIE FOR!
What’s New at Disney Springs: A Whole Line of “Up” Merchandise, Everglazed Construction Progress, and the Greatest Birthday Sundae EVER! »