Need a Disney engagement ring delivered to your door in two days? BOOM. Amazon’s got you! 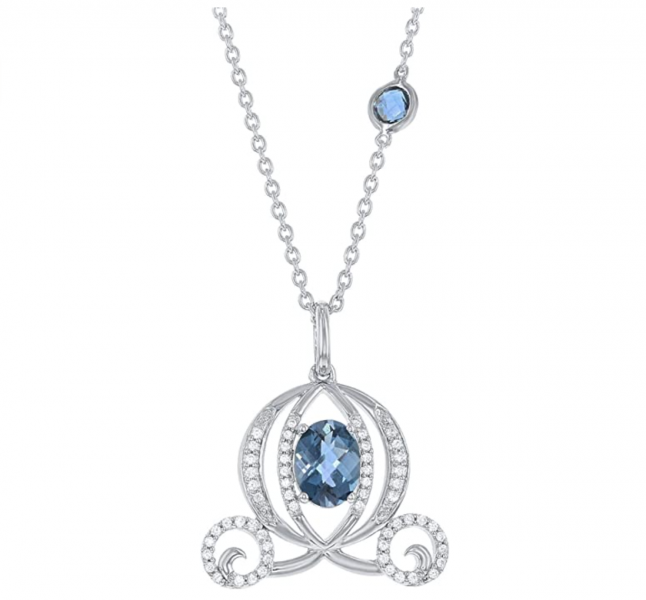 Ever wondered about the PRICIEST Disney stuff you can score on Amazon Prime? We were doing some much-needed retail therapy and decided to daydream for a bit. Sure, some of the results were fairly unexpected, but that’s not really the crazy part. It’s the fact that you can order all of this super bougie (and super weird) stuff and have it shipped to you in a couple days. Luxury buyers and window shoppers, come see what we found!

Did you know you can drop 2k on Disney jewelry and have it shipped to you without ever having to leave your couch? You no longer have to make awkward small talk with a salesmen to get your precious jewels. This is the future, baby! Elon Musk catapulted a car into space and you can have 24K diamonds shipped to your home in less than 48 hours. IT’S THE FUTURE!

Look, we’re no stranger to spendy Disney jewelry. It seems like every day Pandora is releasing another tiny charm for $100. But this is something else. With ridiculously fast shipping, you can immediately be the owner of a Rapunzel Bridal Ring for over $2000. Forget your anniversary? Boom — get a ring on Prime. Need an engagement ring, but don’t want to deal with traffic? Click that Buy Now button, y’all. Single, happy, and looking for a bit of sparkle? Amazon’s got you, boo. 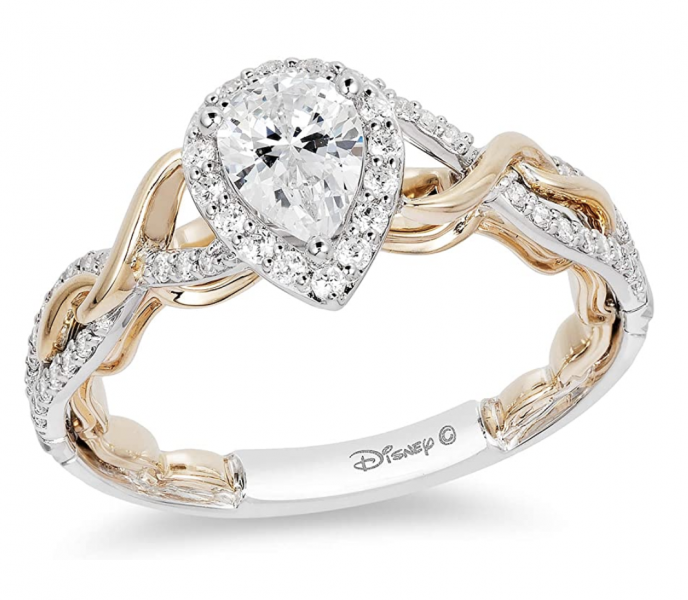 We’ve seen some of this same jewelry at Ever After in Disney Springs. Now, you can pretend that you boarded a private jet plane to Florida just to pick up your Belle Bridal Ring. You can brag to your friends, “What, this old Cinderella topaz pendant? Oh, it’s just a little something I picked up on my weekend trip to Orlando.” *tosses hair* (IRL you were wearing the same dirty oversized t-shirt for the last 3 days and eating Doritos on your couch while you bought it but NO ONE NEEDS TO KNOW THAT!)

For some, a pricey wedding ring isn’t too surprising. You usually don’t get princess diamonds at a bargain. It was the other items that kinda blew our mind.

You can be the proud owner of a Walt Disney Animation DVD box set or a HALFWAY COMPLETE Marvel Universe Blu-Ray set for the low, low price of $600. *record scratch* Um…hold up. We have so many questions! Who buys DVDs still in the age of Blu-Rays?? (Ok ok, we know you CAN watch DVDs in a Blu-Ray player.) And why would you spend $600 when you can watch all these movies on Disney+ for a couple bucks a month? AND why does this Marvel set come in a glowing collector’s case that looks like it was made in 2004? 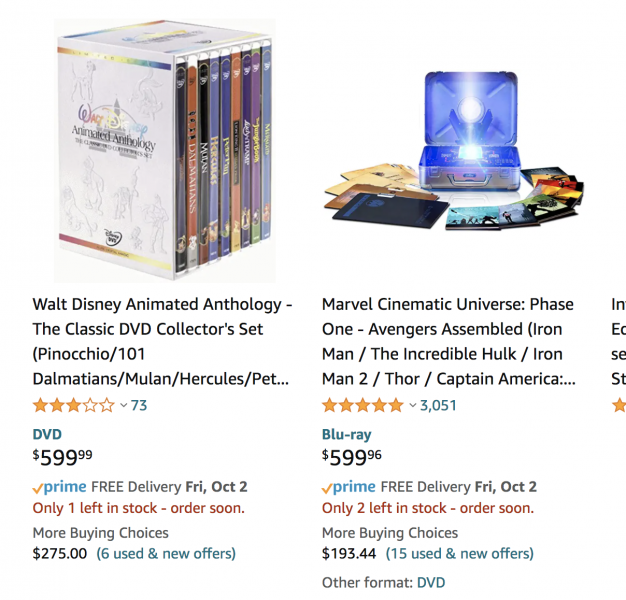 The case is cool, but how on earth are you displaying that? It has to be OPEN to show off the goods, right? Sure, we’d be dancing around our living room pretending to have our own plastic Tesseract in our possession, but as far as the MCU movies go, why would anyone want a partial box set of the films? The set was released pre-Infinity War, Black Panther, Endgame, and more.

Is there a market out there for people who collect box sets that jumped the gun and came out before a series was complete? Is there a special Lord of the Rings box set with JUST the first two movies floating around out there? If so, how much is THAT? And didn’t those people know a third movie was coming? So. Many. Questions.

Ok, brace yourself because it doesn’t stop at box sets! The most intriguing buy of all is this $1000 adult Shadow Trooper costume. Look, we get it. Star Wars fans buy some spendy collector items. But, this is a hilarious impulse buy, especially when you consider you could be buying it on your phone in the middle of the night while you buy that refill of toothpaste you forgot you needed! 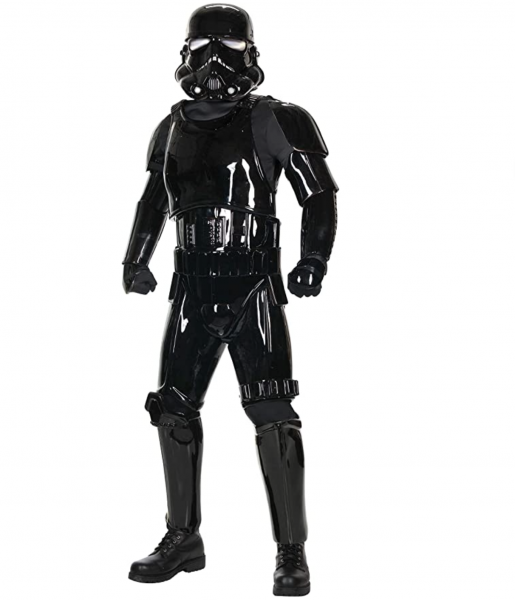 Imagine your spouse opening up a giant Amazon box, thinking it’s the new Shop Vac you ordered when it’s actually a life-size Star Wars suit. (And it’s not even the regular Stormtrooper suit! It’s the lesser-known Trooper!) But hey, we won’t judge! This might be a good purchase for future D23 conventions or just wearing to the grocery store when you run out of clean pants. 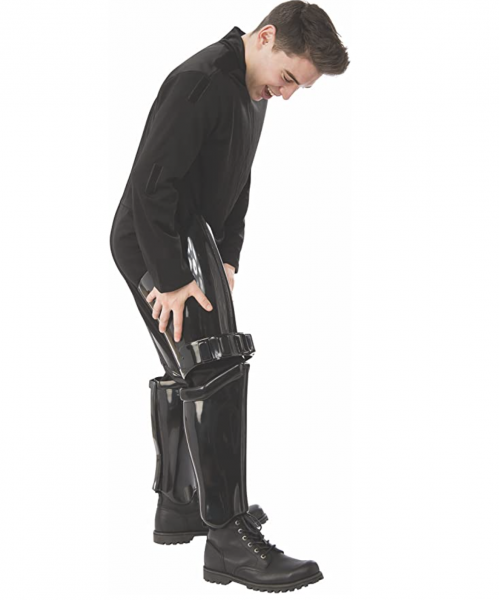 And look at how much fun this guy is having while he puts on his suit! ©Amazon

Listen, we’ve seen our fair share of spendy Disney merch. What’s crazier is the fact that you can order all this stuff on Monday and get it shipped directly to your house by Wednesday. Ah, the modern world we live in! Need some entertainment and a good laugh? Head to Amazon and see ALL the luxury Disney items for sale!

Check out the most outrageously expensive things we found at Disney World here!

Do you have your eye on a spendy Disney item? Let us know in the comments!

« Could You Stomach This BRAIN Cupcake in Disney World?
This Snack Tastes Like a WHOLE CUP of Brownie Batter in Disney World and We’re HERE For It! »