Just a few weeks ago, the official California theme park reopening guidelines were released. It has since been speculated that Disneyland may not be able to open until the summer of 2021 due to the requirements contained in the guidelines.

According to The Orange County Register, Santa Cruz Beach Boardwalk will be the FIRST amusement park to reopen its rides under California’s theme park reopening guidelines, following a seven-month closure. The Boardwalk is able to reopen because it is considered a “small” theme park, with a capacity of less than 15,000 visitors. The county it is located in reached the orange or third tier recently and now the theme park is set to reopen on November 7th.

Pursuant to the state’s guidelines, the Santa Cruz Beach Boardwalk can reopen at a capacity of 500 in-county visitors, and must require all guests to have an advance reservation in order to enter. So, starting this Saturday, Santa Cruz County residents with advance reservations will be able to enjoy some boardwalk rides once again.

Advanced hours and dates have been announced for November 7th and 8th so far, but it’s expected that they’ll announce additional dates soon. Two reservation sessions have also been announced: 12PM to 2PM, and 3PM to 5PM. From 2PM to 3PM there is a cleaning session scheduled. You can attend both sessions, but you’ll need separate reservations for each.

The Boardwalk website also notes that there will be no in-and-out access. If you’re a Beach Boardwalk season passholder, you’ll be able to enter for free. Everyone else can purchase a 25-point Boardwalk card good for rides and games for $25.

The Santa Cruz Beach Boardwalk is California’s oldest amusement park, and plans to reopen in off-season mode with just 8-10 rides in operation. A number of rollercoasters and other outdoor rides are expected to reopen this weekend including the 1924 Giant Dipper wooden coaster, Fireball, and more. The Carousel and other indoor rides, however, will remain closed.

Visitors wanting to hop on those boardwalk rides will undergo a temperature screening and will have to verify their county residency. There are also a number of other rules and regulations regarding masks and more listed on the Santa Cruz Beach Boardwalk website.

The shops and restaurants at the Boardwalk have already been open in a limited capacity, and miniature golf, bowling, and an outdoor arcade will also be open to all guests, regardless of what county they live in.

Because this is a “small” theme park, the rules are different than those that apply to Disneyland, as it is a “large” theme park. Under the current guidelines, Disneyland will not be able to reopen until Orange County (the county where it is located) reaches the lowest risk tier.

But, that doesn’t mean Disneyland isn’t taking steps to prepare for when it can reopen. In fact, Disneyland has already announced that it plans to install thousands of health and safety measures to prepare for an eventual reopening, we’ve seen new features added to the Disneyland app, and Disneyland will actually be reopening part of Buena Vista Street in Disney California Adventure Park for some limited shopping and dining later this year. 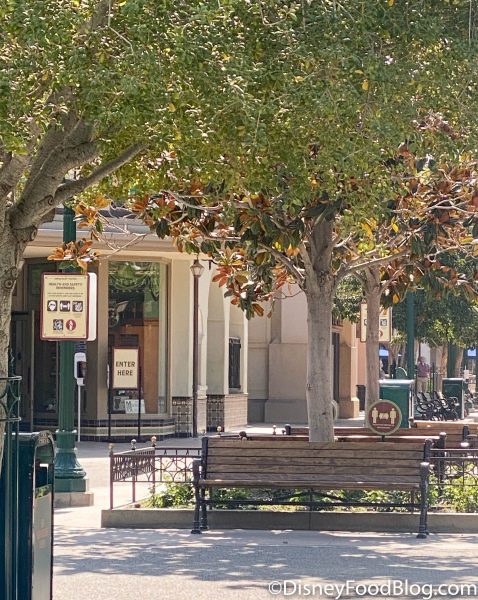 Right now, all reservations at Disneyland Resort hotels are canceled through mid-November, but all of this is subject to change. We’re watching for any update related to Disneyland’s reopening and will let you know if we spot any updates.

Should Disneyland just reopen as a mall? Here are our thoughts!