We’ve been keeping a close eye on the construction of Star Wars: Galactic Cruiser (a.k.a. the Star Wars hotel) coming to Disney World.

Today we got an amazing peek at one of the areas on the interior of this ship. During the IAAPA Expo presentation this morning, Josh D’Amaro, the current Chairman of Disney Parks, Experiences and Products, shared a look at one of the guest rooms coming to the Star Wars hotel and it’s totally out of this world!

Disney executives have previously indicated that the Star Wars hotel is a project that has been given priority by the company (along with select other ones). We’ve heard some details about the hotel experience, including that it will be a two-night experience similar to a cruise, and will be incredibly interactive. But today, we got to SEE a key update related to the project!

Here’s a look at the concept art that Disney had shared previously regarding what one guest cabin would look like on the Galactic Starcruiser, and… 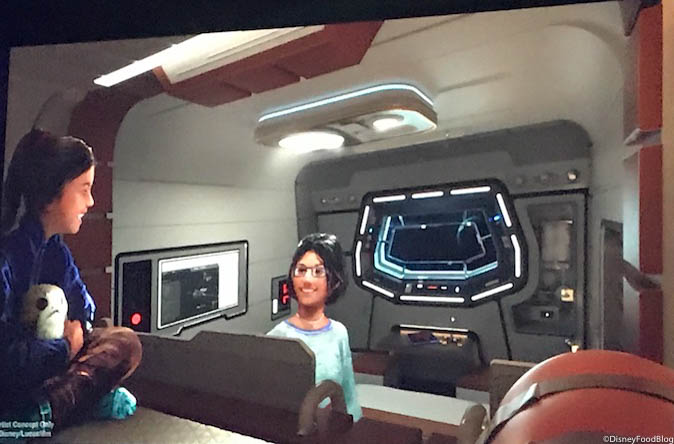 …here’s a photo of the real thing, well a mocked-up version anyway! Josh D’Amaro shared this photo of a mocked-up guest cabin at the Star Wars hotel. Let’s break down some of the key features. It looks like there’s a bed with an orange bedding detail on top. There’s also a “window” looking out in to the depths of space (LOVE), with what appears to be a table that can pull out from underneath it, as well as what are likely some small chairs. There’s also some kind of screen on the left side. It appears to be showing some updates about the “ship.”

On the other side of the bed, you can see another sleeping area with some bunk beds. It looks like there’s a reading light in each of the bunk bed areas and some kind of other detailing on the right hand side. In this photo, you can also see what appears to be the door to the remainder of the ship as well as possibly the door to the restroom on the left of that passageway and a countertop area to the right.

D’Amaro said when you compare the concept art to the mocked-up rooms, Disney is making “really great progress in making these dreams become a reality.”

In addition to a peek at the guest rooms, we also got a look at the construction of the front entrance area of the hotel. It looks like things really getting underway. 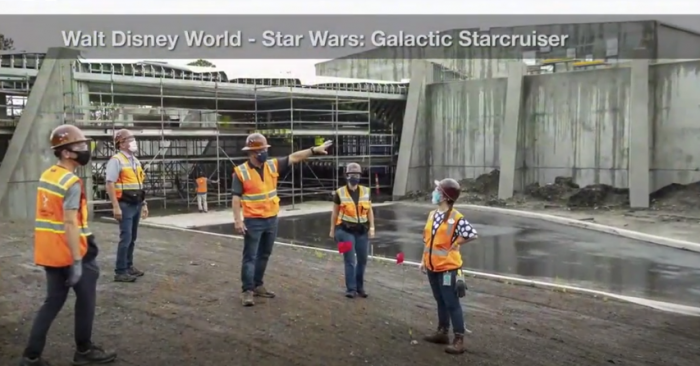 Curious to know what other adventures will await you aboard The Halcyon (the name of this Starcruiser)? Among other things, guests will be able to train with a lightsaber, interact with their favorite Star Wars characters, and even get the chance to operate some of the ship’s defense systems — you know, just in case the ship gets into an epic space battle, no big deal.

Secret meetings based on your unique story on the ship may also take place. You’ll truly be living out your own Star Wars adventure. There will also be a stylish lounge — The Sublight Lounge — where guests can relax and grab a refreshment.

D’Amaro noted that the immersive experience at this hotel is “unlike anything ever built before.” Star Wars: Galactic Starcruiser is set to open in 2021, so we expect we’ll hear more updates about this project as its opening approaches. Be sure to come back for more updates!

Do you want to stay at the Star Wars hotel when it opens? Let us know in the comments!