Hello from opening day of EPCOT’s Food and Wine Festival! 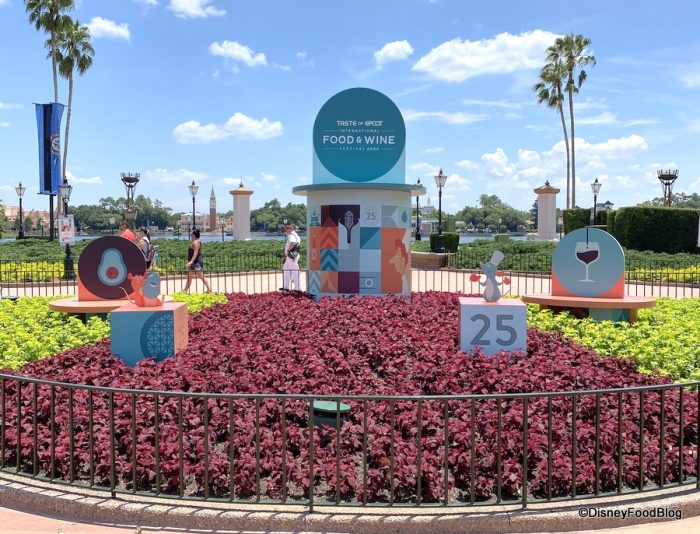 We’re here checking out allll the eats and drinks around the World Showcase! If you like to start your international travels in Canada instead of Mexico, one of the first places you’ll pass by is Refreshment Port, so let’s see what the spot has to offer at this year’s festival!

The Food and Wine offerings at Refreshment Port have been trimmed down A LOT this year. There are only THREE items available compared to the eight we had last year😢. BUT, there are some new items, so we’re more than willing to give them a shot! 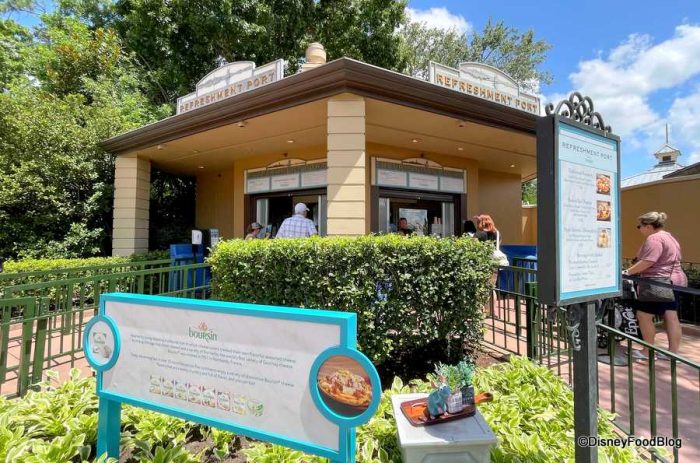 The menu has two new items: the Braised Beef Poutine and the Numanthia Termes Tinta de Toro Red Wine. It’s also where you can find the returning Maple Boursin Cheesecake (one of our Best of the Fest items from 2019!)! 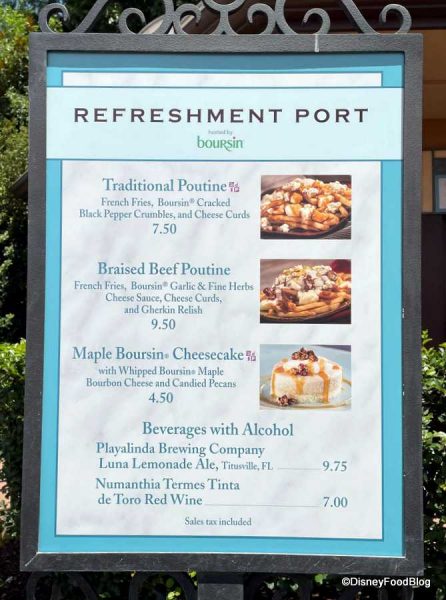 If you’re not into those added flavors on top of your poutine, don’t worry! There’s still the Traditional Poutine on the regular menu.

We started with the Braised Beef Poutine for $9.50. It has French Fries, Boursin Garlic & Fine Herbs Cheese Sauce, Cheese Curds, and Gherkin Relish. Cheese sauce on top of cheese curds?! Sign us up! 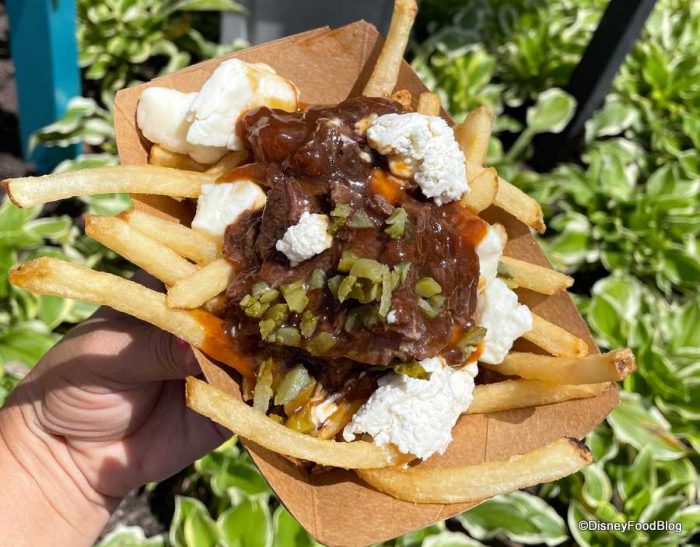 This was delicious! Ours came with lots of cheese curds and a surprisingly good amount of meat! We found a couple of fatty pieces in our dish, but that’s to be expected. 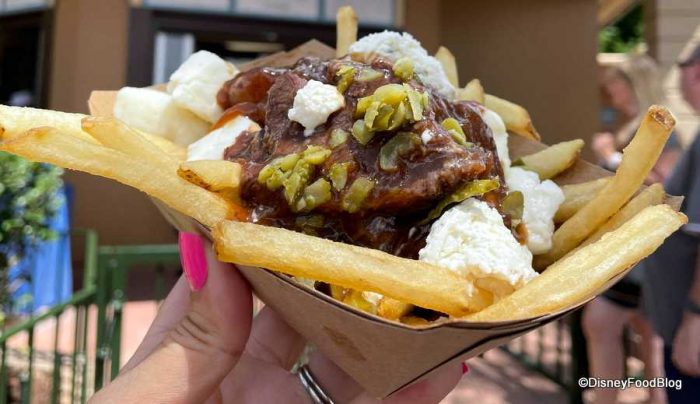 The relish on top was nice and gave it a little bit of crunch and some extra flavor (no such things as too much flavor!). Now, about that Garlic & Fine Herbs Cheese Sauce — it was really unique and gives the dish a little more creaminess and a softer texture as opposed to just the regular consistency of the cheese curds. You know us, we can’t be mad when a dish comes with added cheese sauce.

NEW this year is the Braised Beef Poutine from Refreshment Port! #TasteEPCOT pic.twitter.com/NfEbdDBmpf

And, of course, their gravy is delicious as always. The fries got a bit soggy towards the bottom but we didn’t find them to be too greasy! This dish is in good company alongside to the other beef poutines we’ve tried in the past, like the yummy Beef Brisket Poutine and the Beef Bourguinon Poutine from Le Cellier. 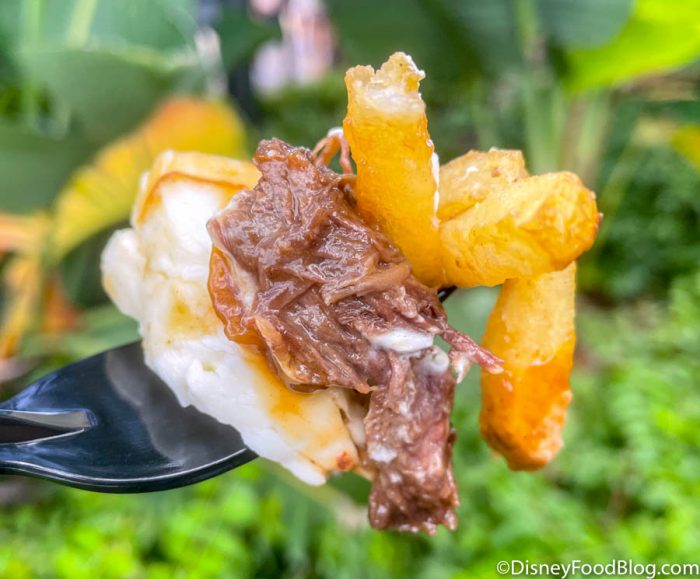 If you want to keep your poutine simple, there’s always their Traditional Poutine on the menu for $7.50. Sometimes less is more, and you can’t go wrong with Refreshment Port’s classic dish with French Fries, Boursin Cracked Black Pepper Crumbles, and Cheese Curds. It’s just one of those quintessential Disney World snacks, ya know? 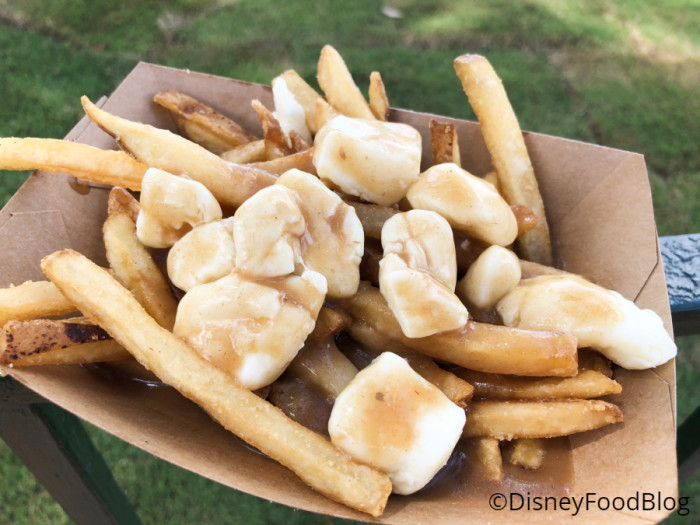 For dessert, you can grab the Maple Boursin Cheesecake, which is an item that migrated over from last year’s Cheese Studio! It has Whipped Boursin Maple Bourbon Cheese and Candied Pecans for $4.50. 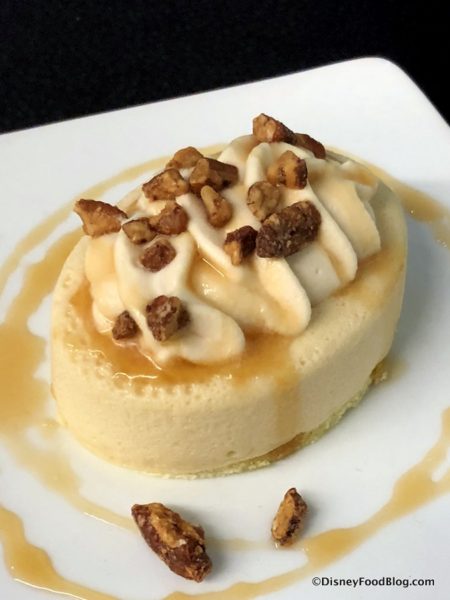 If you’re into cheesecake, this dessert takes everything to the next level! The hint of bourbon in the caramel sauce gives it that extra somethin’ that we seriously can’t get enough of, not to mention its decadent and creamy texture always leaves us wanting more! 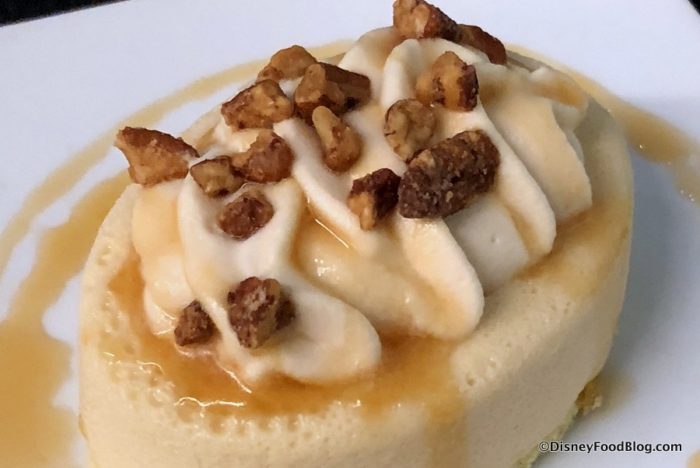 Refreshment Port’s food menu may be small, but it packs a solid one-two punch between the Braised Beef Poutine and the Maple Bourbon Boursin Cheesecake!

There’s only one drink at Refreshment Port this year, the new Numanthia Termes Tinta de Toro Red Wine for $7, along with the returning Playalinda Brewing Co. Luna Lemonade Ale for $9.75. 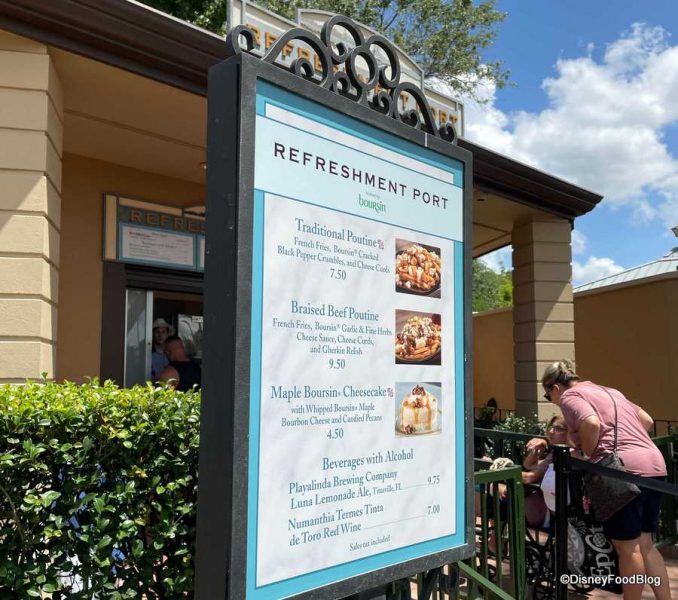 Compared to other booths, Refreshment Port’s beverage selection is more limited, but they did manage to squeeze in options for both beer and wine drinkers!

Refreshment Port is a year-round go-to if you’re on the search for scrumptious Disney World Poutine. We look forward to festival seasons every year because it can sometimes mean NEW poutine offerings, and we are over the moon with this year’s newest addition! Also, be sure to be on the lookout for Remy — he can be found at Refreshment Port as part of Remy’s Ratatouille Hide & Squeak! 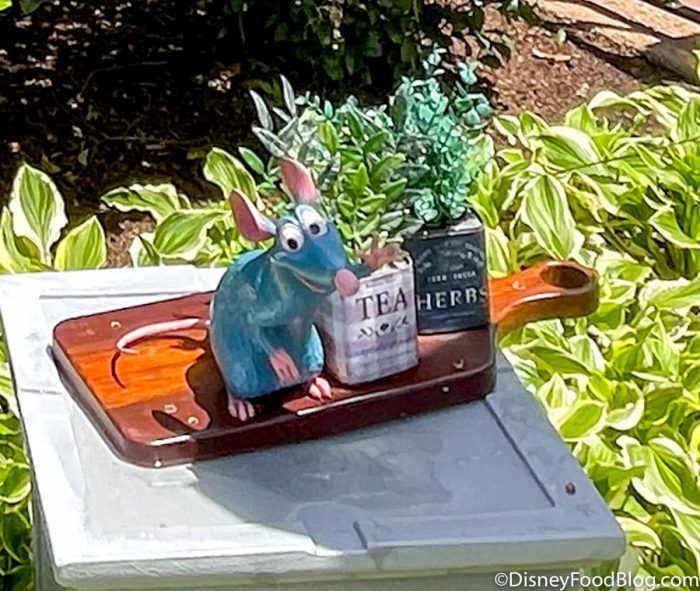 Be on the lookout for Remy at Refreshment Port!

Despite its limited menu, Refreshment Port is a solid stop on your tour across the EPCOT Food and Wine Festival! That will do it from Refreshment Port this year! We’re here trying ALL of the booths that opened today, so stay tuned to DFB for more reviews!

Click here to see all the 2021 EPCOT Food and Wine Menus!

Are you excited to try the new poutine at Refreshment Port? Let us know in the comments!