Can you believe it?! It’s officially Disney World’s 50th anniversary! 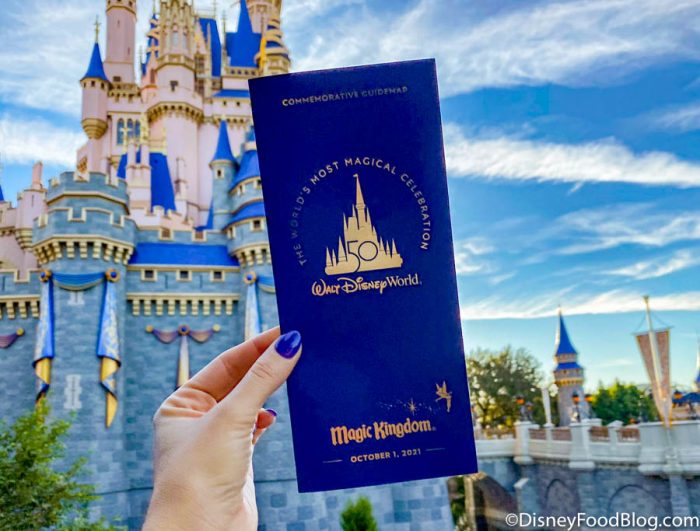 To help kick off the 18-month celebration, Disney World has released a 1971 merchandise collection and there are 150 snacks (Yes, you read that right.) coming to the parks! Now, we found a new Magic Kingdom map that has been released to help guests navigate all of the 50th anniversary happenings.

There’s a lot to unpack here. So let’s take a look at the new map! 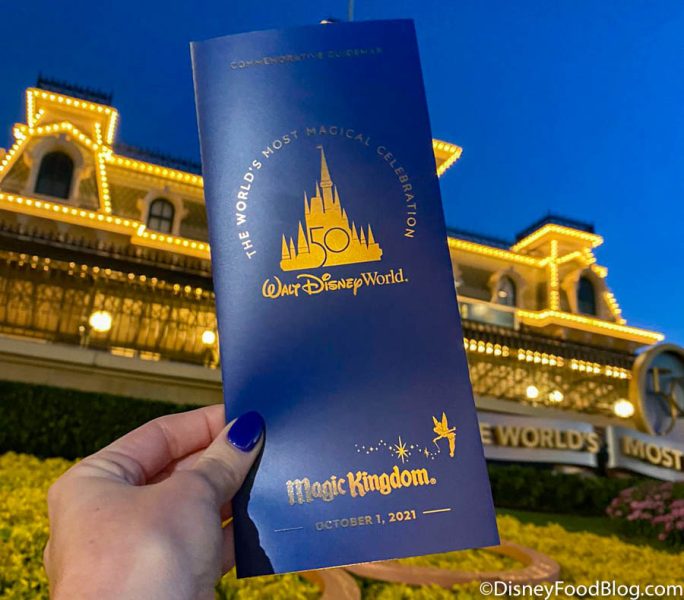 The front of the new Magic Kingdom is a very classy solid dark blue, with gold lettering spelling out “Magic Kingdom, October 1st, 2021.” The 50th anniversary logo is also on the front in gold, along with Tinker Bell!

Here not-so-bright 🌙 and early for the 50th! #DisneyWorld50 pic.twitter.com/kCthRC04vo

Inside you’ll find a “Tips and Information” page with information about guest relations, park rules, and a website that guests can visit to learn all about the 50th Anniversary Celebrations. 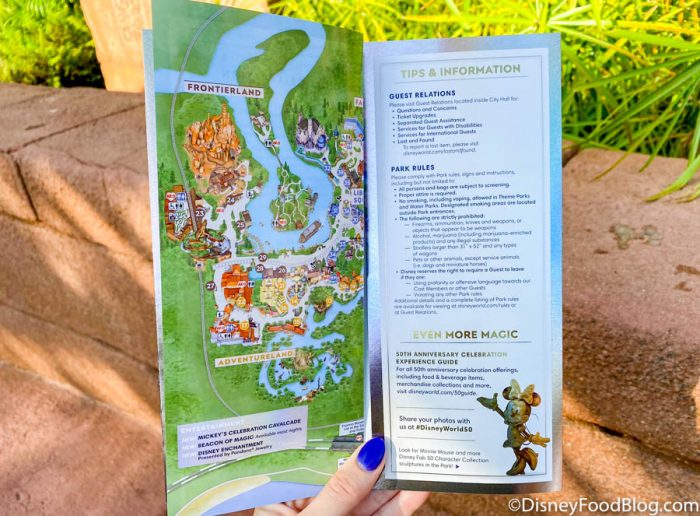 There’s even a new hashtag for the celebrations, #DisneyWorld50, which Disney is encouraging guests to use on social media. And we found a reminder to check out all the gold character statues around the parks as well! 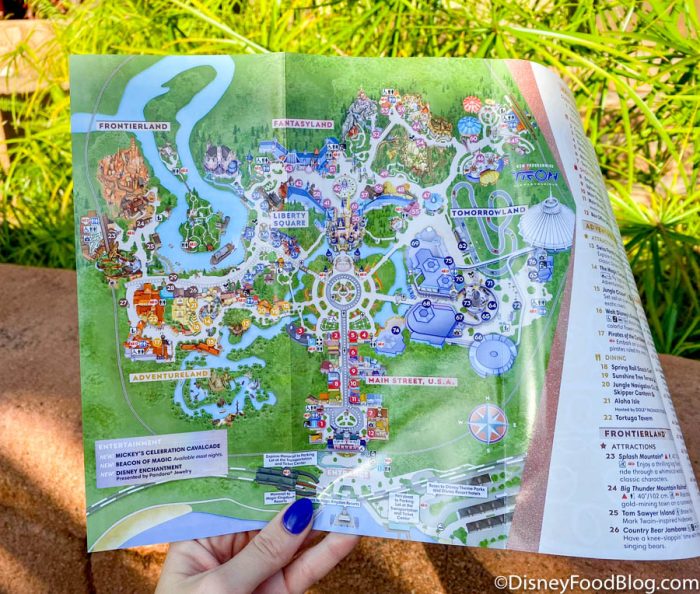 Inside, there’s the classic map of the Magic Kingdom with some extra EARidescent touches on the labels for the different lands. There’s also a colorful guide to Entertainment with information about the new events, including Mickey’s Celebration Cavalcade, the Cinderella Castle Beacon of Magic, and Disney Enchantment. 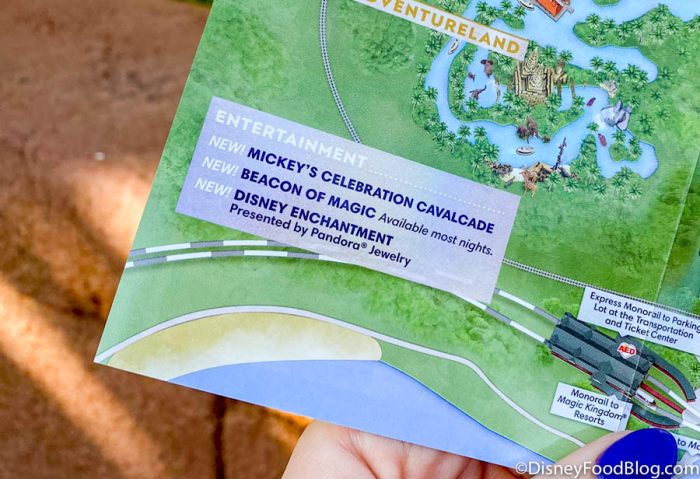 All the information about the attractions, restaurants, and shops is set against a plain background with subtle swirl designs. 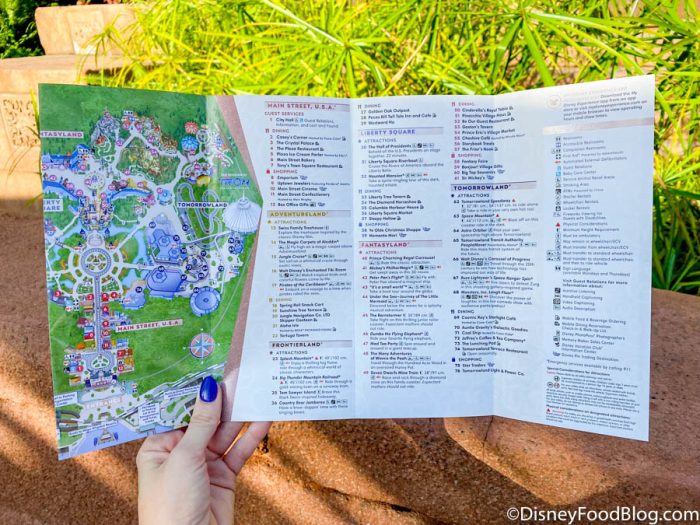 And there’s a special 50th Anniversary insert that has more info about all the special events, the history of the park, and some of the limited-time merchandise and snacks that will be available during the celebrations. 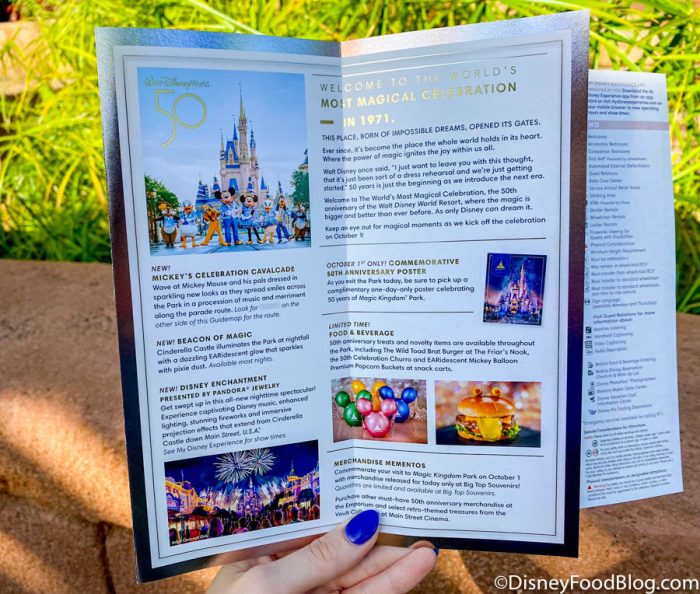 This commemorative map came in limited numbers, so it may run out during the day. Just be sure to keep that in mind.

We will be on the lookout for more 50th anniversary maps in the other parks! And stay tuned to DFB for all of the exciting 50th Anniversary updates.

See ALL of the 50th anniversary treats releasing around the parks here!

Are you planning to visit Disney World for the 50th anniversary? Let us know in the comments below.