It’s a new year, and that means it’s time for new foods, drinks, merchandise, and MORE from the Taste of EPCOT International Festival of the Arts! We’ve been eating and drinking our way around EPCOT and checking out all the best (and worst) foods this year, and now it’s time for us to visit the Refreshment Outpost! 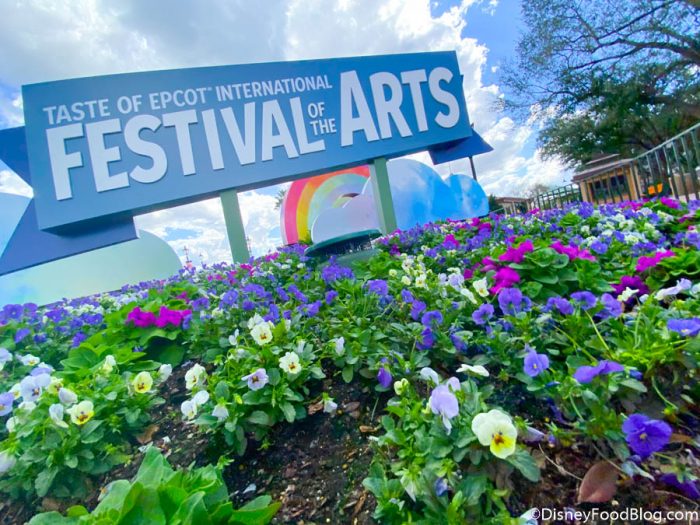 It’s that time of year again!

This year, we noticed some new additions to the menu as well as some returning options from the past. We’re hungry, so let’s see what the Outpost has to offer!

The menu offers the return of the Plant-Based Bratwurst and Blue Raspberry Blonde Ale as well as the Artist Palette Jumbo Chocolate Chip Cookie. And, as a bonus surprise, they have Dole Whip on the menu!

How does this booth stack up against the others? Let’s find out!

In the past, we’ve recommended the Plant-based Bratwurst to our readers who are looking for a meat-free dish. This year, it’s made with spicy turmeric aïoli, which is made with coffee barbecue jackfruit, and slaw. It’s $9.50, so it’s definitely not the cheapest item you’ll find at the festival. 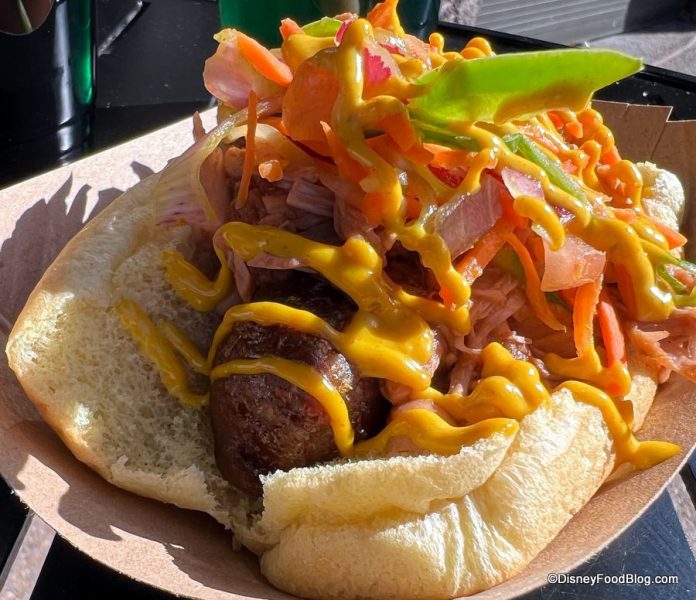 We weren’t a huge fan of the jackfruit flavor, as it was really sweet, yet pickled, so it kind of missed the mark. On the other hand, the bratwurst and the slaw weren’t bad at all. Because it’s plant-based, the brat is very soft, which throws us off a little bit, but it still had a good flavor. All in all, it wasn’t spicy hot, but very well-spiced with African flavors! 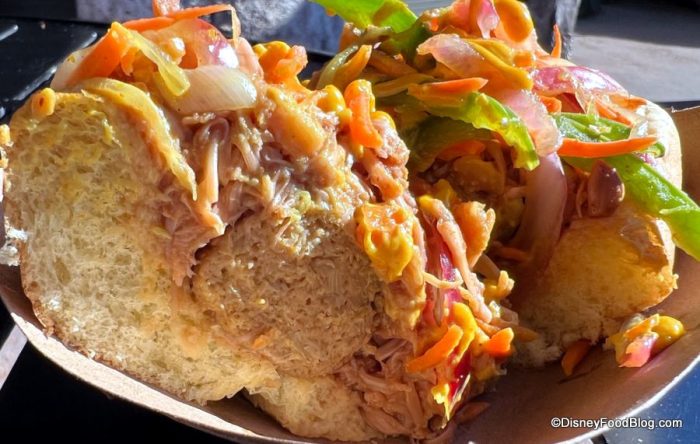 Moving on to the Dole Whip, we ordered the Dole Whip pineapple swirled with cherry for $5.25. This one really surprised us, as the cherry was really sweet — similar to a cherry candy or a sucker. It wasn’t tart at all. 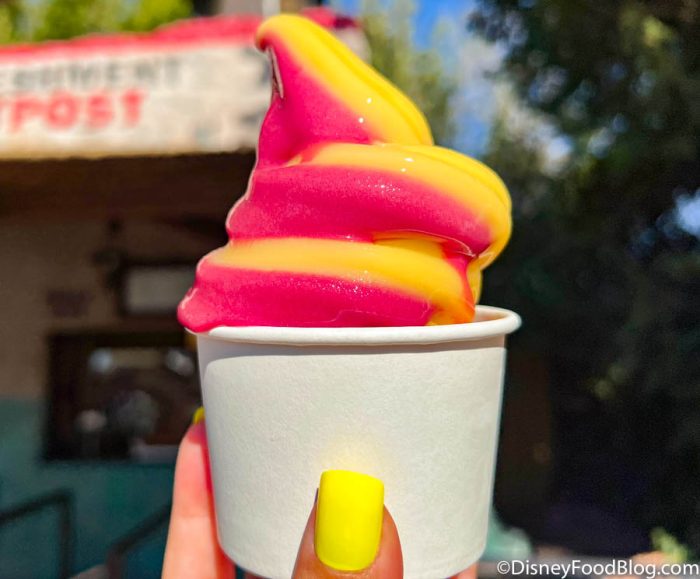 The cherry didn’t have quite the same texture and consistency as the pineapple Dole Whip, so there was a slight difference when taking a scoop of both. However, the flavors blended really well together, with the sweet and the tart. 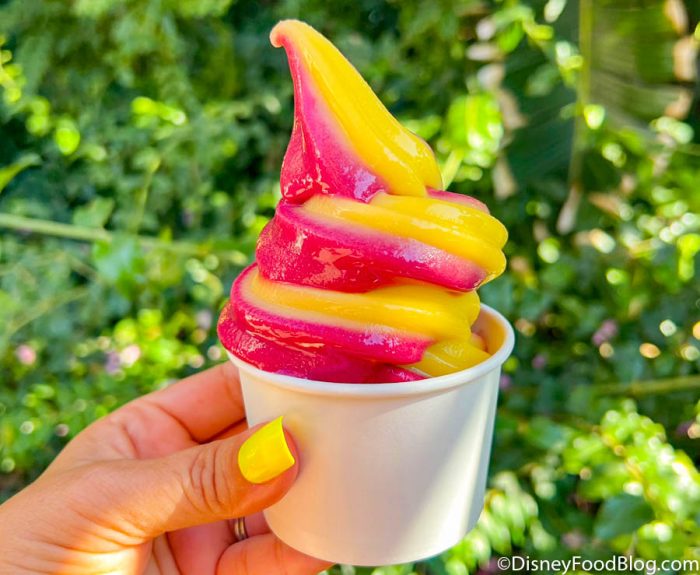 The flavors worked surprisingly well together!

Moving on to the drinks, we ordered two of the beers on the menu. The first was the Blue Raspberry Blonde Ale for $10.75. It’s sweet, not incredibly so, but it tastes like a light beer mixed with raspberry syrup. The ultimate look is actually greener than it is blue. 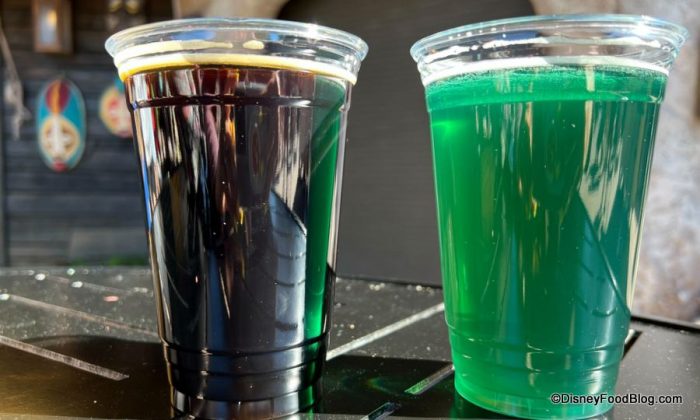 The other option we chose was the Nairobi Coffee Dark Beer, also $10.75. This one also tasted like a light beer, except enhanced with a STRONG coffee flavor. We expected more of a stout, but it wasn’t really like that, still very light. Even our reporter who isn’t a coffee drinker was pleasantly surprised by this drink! 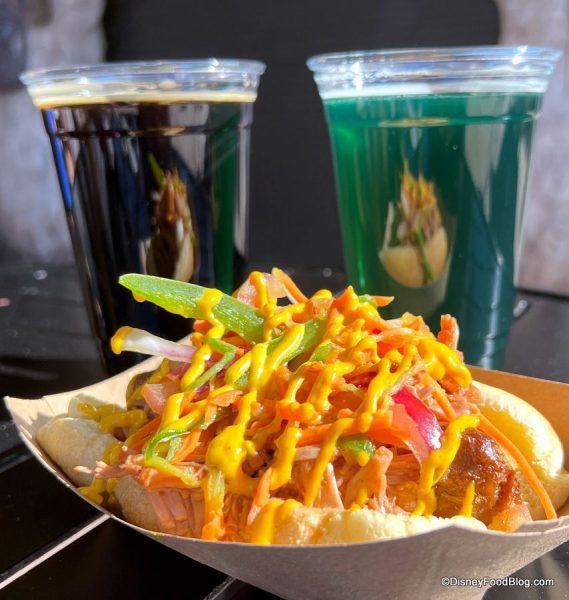 Would you try coffee beer?

In terms of other options on the menu, you can also order the Brown Ale, or you can pick up the Artist Palette Jumbo Chocolate Chip Cookie. The cookie has been a returning option at the festivals for the past few years, and you can check out our last review of it here. 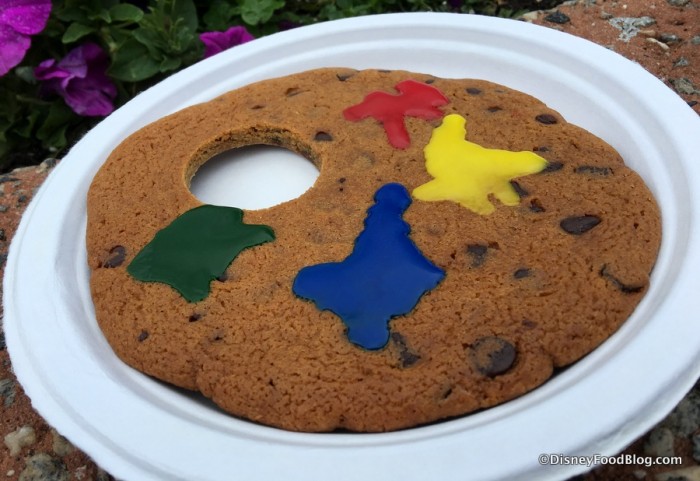 That’s everything at the Refreshment Outpost, so what did we think?

This booth was definitely a good stop, but it also wasn’t the most knock-your-socks-off food we ate all day. The bratwurst would probably appeal to plant-based eaters, and the Dole Whip swirl is definitely worth a try. For those who are interested in some rather creative beers, the Refreshment Outpost may also appeal to you.

We would definitely eat here again, but it’s probably not going to be our number one, must-try booth of the fest. But if you’re looking for something unique, Refreshment Outpost has got you covered! 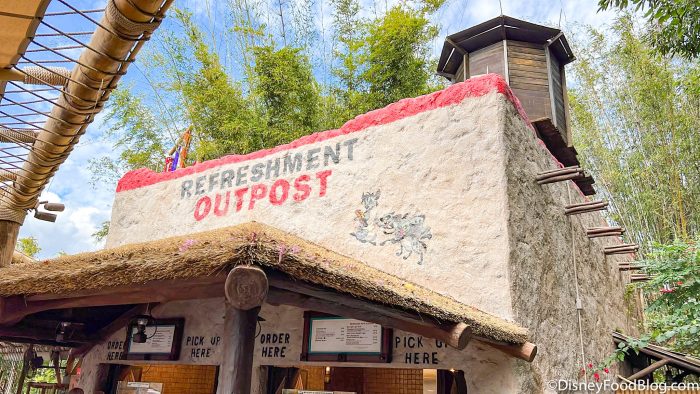 Stay tuned to DFB for more food reviews and updates from the Festival of the Arts today!

Check out ALL of our reviews from EPCOT’s Festival of the Arts!

Will you try any of the foods on this menu? Let us know in the comments!

« Spaceship Earth Is Getting a Muppets-Inspired Look for the EPCOT Festival of the Arts 🌈
Hundreds of Price Increases, EPCOT Festival News, and More Big Disney Updates! »