When Iger was first announced as returning to the position of CEO of The Walt Disney Company, stock prices jumped up. They were at $91 per share on Friday, November 18th, and jumped to $97 on Monday, November 21st, the day after Iger’s return was announced. Since then, prices evened out a bit, but they are picking up.

As of December 5th, Disney’s stocks are nearing $100 per share — currently at over $99. It’s also important to note that prices have not dropped below $94 since Iger took over. 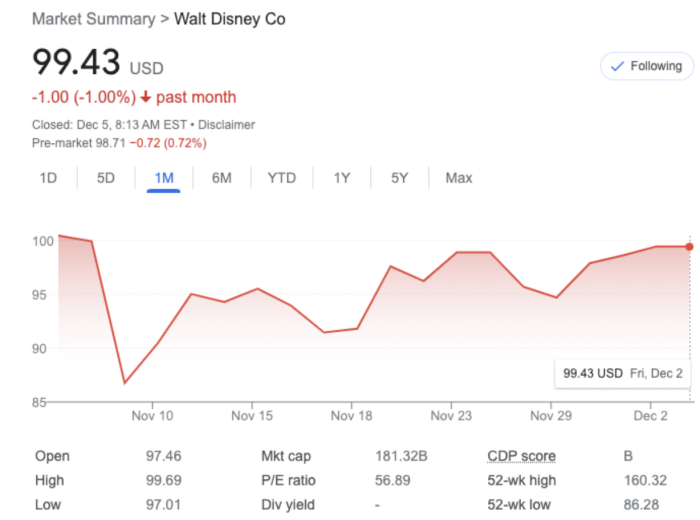 But, are stock values where they need to be for The Walt Disney Company? Disney shares are still trading around the same value that they were at the end of 2014, according to Yahoo Finance. And, bringing back a CEO that was generally received positively by the public doesn’t always help.

“The experience of other so-called ‘Boomerang CEOs’ shows that once-successful leaders might stumble the second time around, with one study finding that companies that bring back CEOs do worse than those that bring in someone new,” according to Fortune. And, a study published in the MIT Sloan Management Review in 2020 showed that companies that brought back a former CEO have “significantly lower” stock performance than those that put someone new in the position.

As for what analysts are saying, it’s a mixed bag. “Given Iger’s track record and experience at the company and industry, we believe this announcement will be well received by investors,” wrote Bank of America analyst Jessica Ehrlich in a note to clients, according to Yahoo Finance.

But, she went on to say “we now expect Iger to fully re-evaluate several of the recent strategic initiatives and corporate restructurings over the past two years, which could create some near-term uncertainty on direction of the company.”

Wall Street analysts and investors seemed to have welcomed Iger back as CEO of Disney, with MoffettNathanson analyst Michael Nathanson saying “Magic is back.” He also upgraded the rating from “market perform” to “outperform,” while raising his stock price target by $20 to $120, according to The Hollywood Reporter. Then, he went on to say “We applaud Disney’s board for the courage to make this change.”

Nathanson said that Iger’s “communications skills and his ability to stay focused and honestly optimistic in the face of structural challenges provided a constant ballast in the roughest of media waters. We believe investors will value the transparency and return Disney some of its long-lost magic with a stronger narrative driving the stock higher again.”

Nathanson also spoke about some changes that could happen under Bob Iger, saying “We would hope and expect that Mr. Iger examines the investment plans at Disney+ and re-focuses their investment on areas of franchise strength and away from broader general entertainment content.”

Wells Fargo’s Steven Cahall wrote in a report that “While Chapek’s departure is not a surprise due to recent turmoil and the stock’s decline, Iger’s resurgence is a positive surprise,” according to The Hollywood Reporter.

He said that investors would see this change as a clear positive, and then wrote “While the announcement doesn’t solve all of Disney’s problems, we think investors will embrace it as it puts perhaps the best leader in media at the helm with a mandate to shake things up.”

But, others feel differently. Doug Cruetz, media analyst at Cowen, told Yahoo Finance Live that “Disney’s problems are more structural than they are related to who’s running the company.” He went on to say “I don’t think there’s any magic wand that by Bob Iger can wave to change that.”

It seems like some analysts are happy about the change and hopeful for the future, while others are more concerned about significant changes that will need to be made in the near future to determine if this was actually a good decision by Disney.

Iger is only supposed to be returning to the position for two years in order to try and find a new CEO for Disney. In this time, we would expect that some changes will be made to try and put Disney’s media division on a more positive course. The theme parks have recovered pretty well following the global pandemic, but media like movies and Disney+ still seem to be struggling.

For more on Bob Iger’s recent return as Disney CEO, check out:

Every Major Change Since Bob Iger Returned as Disney’s CEO

Are you happy about Bob Iger’s return? Tell us your thoughts in the comments.