During this difficult time, we know that many of our readers want to be kept up to date on news and information that may speak to the Disney Parks closures. This is why you’ll see this type of content on our blog. But if you only come to our site from social media, this may be all you see. The majority of our content continues to focus on Disney vacations, restaurants, attractions, and, of course, food. Please head to our latest posts here to see what we’re writing about today!

When Disney World extended their closure, they announced it was effective “until further notice.“

With all of the parks worldwide currently closed, Disney is facing an unprecedented situation. Disney hasn’t provided an estimated reopening date for any of the parks, which left us wondering…how will we know when Disney World is close to resuming operations? Here are the first signs we’re keeping an eye out for!

First, we have to acknowledge that Disney World doesn’t exist in a vacuum. There are some factors on a local, state, and national level that we think Disney will continue to reference in their decision making.

Disney World property is located in two counties — Osceola County and Orange County. Both currently have stay-at-home orders in effect. Since these orders require the closure of non-essential businesses, Disney will likely not be able to reopen while these mandates stand.

Former CEO Bob Iger has discussed how serious the company is about health and safety, so we don’t expect to see them reopen until the local governments have deemed it safe to do so.

Disney World made the announcement about their impending closure on March 12th, which was several weeks before local stay-at-home orders were implemented. With that being said, Disney could remain closed even longer than local requirements order.

As reported by NPR, the number of new cases is dropping in some areas, but in order to continue flattening the curve, “the public must continue social distancing to maintain that trajectory.” It’s likely Disney will be on the forefront of doing what they can to encourage social distancing until it’s deemed safe.

See how the closures are affecting Disney’s value here

Other Large Gatherings Are Approved

Given the size and congestion of the crowds at Disney World, we don’t expect them to reopen until other large gathers such as schools, churches, concert venues, etc, are also approved to resume. According to The New York Times, on March 15 the C.D.C. made the recommendation that gatherings do not exceed 50 people.

We expect Disney to keep an eye on updates to such recommendations and respond accordingly. Again, since they chose to close before they were legally required to do so, there’s a real chance they could remain closed beyond when they’re able to reopen in the name of safety.

Here are ways Disney Would could be changed forever by this

As the local, national, and global situations improve, there are some specific actions we’ll be looking for Disney to make that indicate a reopening date is close.

Haunted Mansion May have Modifications When Disney World Reopens

Generally, Cast Members receive their schedules one week ahead of time. While we’re not sure if CMs will receive more notice regarding the return to work, we expect that initial schedules won’t indicate an immediate reopening of the park, as the team will need to clean, restock stores and restaurants, test attractions, etc. So, we expect the release of Cast Member schedules to indicate the reopening of Disney World is close, but not immediate.

Originally, Disney World was scheduled to remain closed through March 31st. But when the closure was extended, Disney didn’t provide a new estimated reopening date, instead they stated they will remain closed “until further notice.”

The current message on the website gives Disney some room for flexibility. So, if this banner is updated with a specific reopening date, we’ll take that as an indicator that Disney is fairly confident that they will reopen by the listed date.

Currently, hotel and dining reservations on the Disney World website are only available for dates June 1st and later (with the exception of Ravello, a restaurant located at Four Seasons Resort). 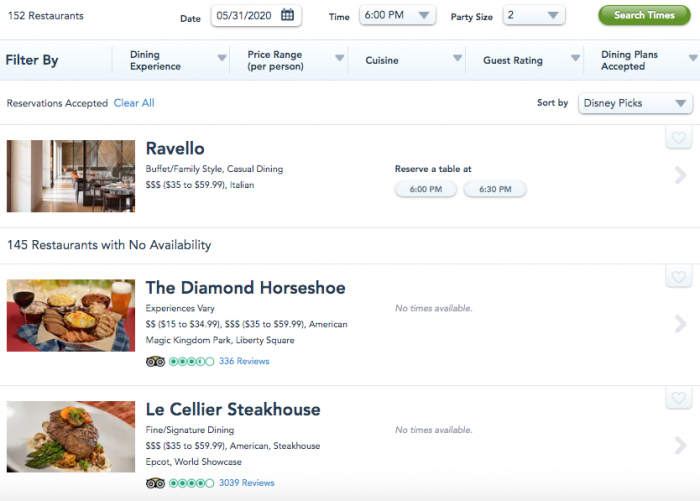 We will be keeping an eye on the available hotel and dining reservation dates because these could point to Disney’s plan for reopening. It will be particularly telling if we begin to see available reservations for in-park dining locations. 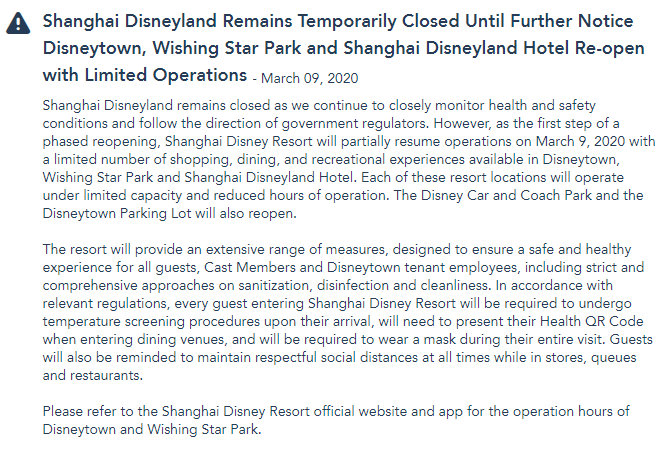 Since Disneytown is Shanghai’s version of Disney Springs, this might be an indication of the type of staggered reopening we can expect at Disney World.

With that being said, not all locations at Disney Springs are owned by Disney. When the closure was initially announced, Disney made it clear that locations owned by third-parties could make their own call, saying, “Individual tenants will make decisions on whether to continue or adjust operations.” So, while some Disney Springs stores and restaurants may begin reopening quickly after stay-at-home orders are lifted, it’s specifically the Disney-owned locations we’ll be keeping an eye on.

Given the unprecedented nature of the situation, no one knows exactly when Disney World will reopen — not even Disney! But, based on the way Disney has handled the closures both here and overseas, there are key things we’re keeping an eye on as a signal that Disney World could be reopening soon. Until then, we’ll keep marathoning Disney+ and dreaming of our triumphant return to the parks!

Click here for answers to your questions about the current closures!

What do you think is the strongest sign to look for signaling Disney World’s reopening? Let us know in the comments!