We’re out here at Disney Springs today working up an appetite like some kind of Paleozoic predator, which can only mean ONE THING! 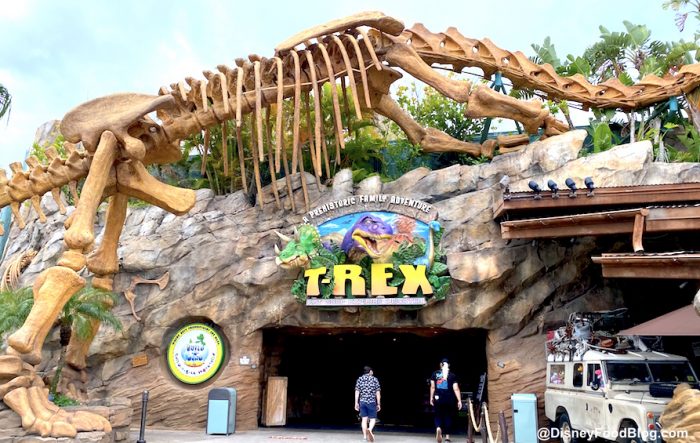 It’s time to eat (or be eaten ourselves?!) at T-Rex — where our next prehistoric dining adventure AWAITS!

If you haven’t been to T-Rex in Disney Springs before, you’re in for a brontosaurus-sized bounty of riches! Not only is this place known for its over-the-top theming (à la Rainforest Cafe), but did we happen to mention there are DINOSAURS and ice caverns inside? I mean, c’mon! It doesn’t get much cooler than THAT! 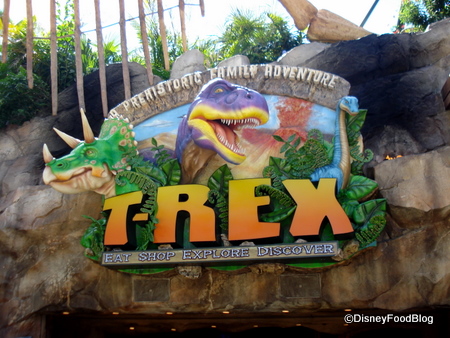 While T-Rex reopened last week along with several other third-party locations, we’ve been making the rounds to as many Disney Springs restaurants as possible to see what health and safety measures they’ve implemented.

In fact, you can see for yourself what our firsthand experience has been like dining at several recently reopened Disney Springs restaurants over the last few days here! 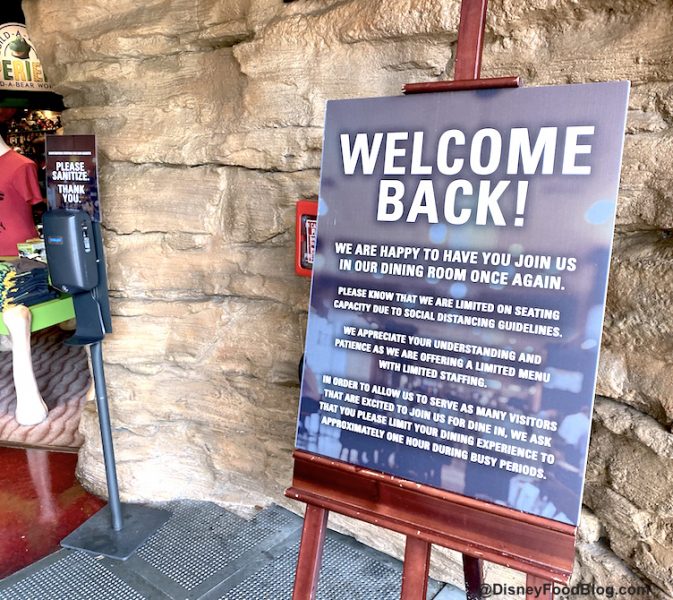 We had previously seen some guests lined up in front of T-Rex waiting for the restaurant to open, but today there was a 10-minute wait! We noticed T-Rex’s gift shop was also open for business!

See what our first day back at Disney Springs was like here! 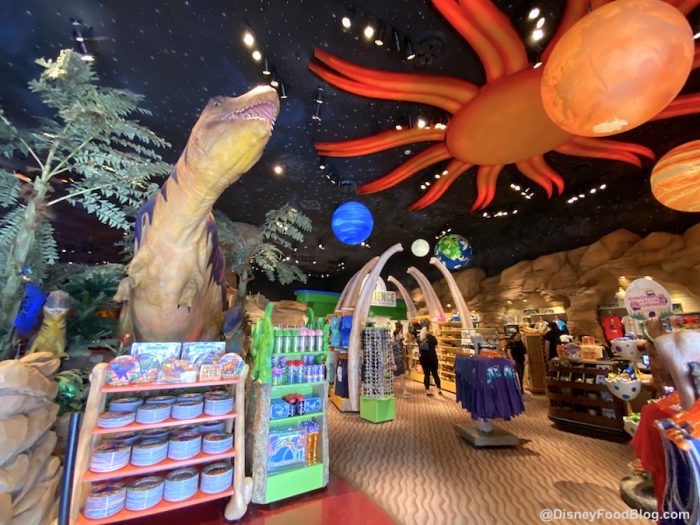 Normally, we have some time to play with the Build-A-Dinos until our pager goes off and its time to be seated, but that wasn’t the case today. Our hostess simply called out our name instead of handing us a pager. 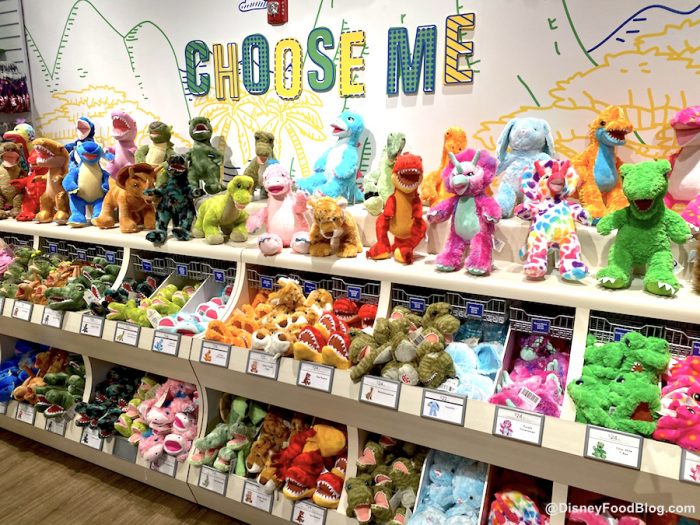 On our way to the table, the hostess mentioned T-Rex is still getting set up and is operating with a smaller staff for now.

Inside T-Rex’s dining room, it can feel a little Cave of Wonder-y at times. Photos don’t really do the place justice (and have a certain way of not really turning out due to the dramatic lighting effects). Our advice is to just soak it all in and not rely on just capturing it all on film! Oh look — a wooly mammoth! 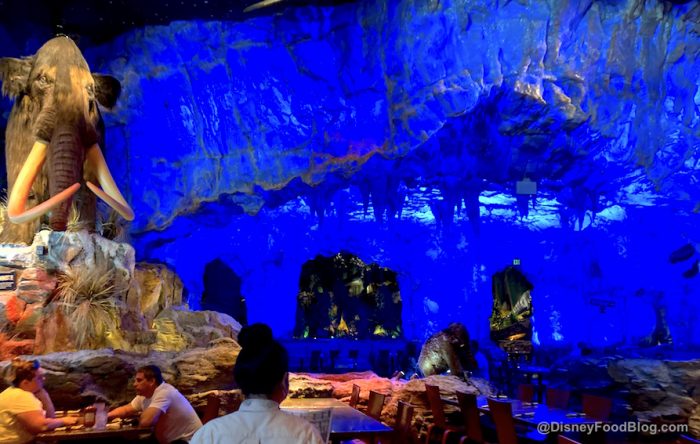 The lighting drastically changes from time to time depending on where you’re seated. This angry-looking red color seemed to signify some type of impending doom like a volcanic eruption or another cataclysmic event. Either way — none of the dinos really seem to mind! They’re just happy doing their thang! 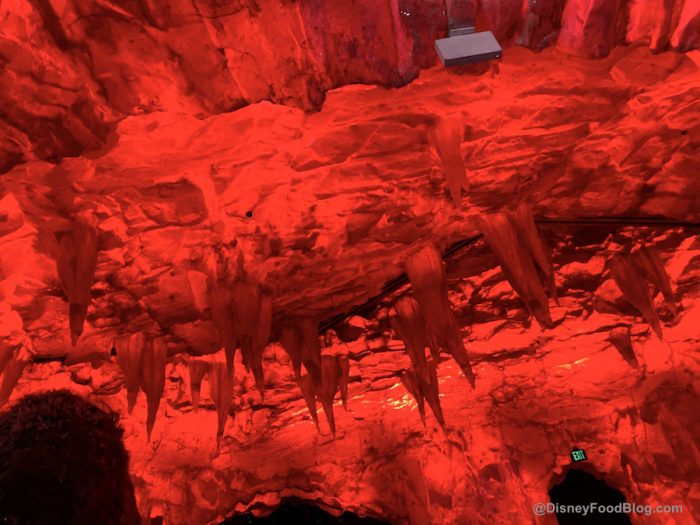 We happen to love the look of T-Rex’s bar which looks like a giant sea monster has overtaken it! 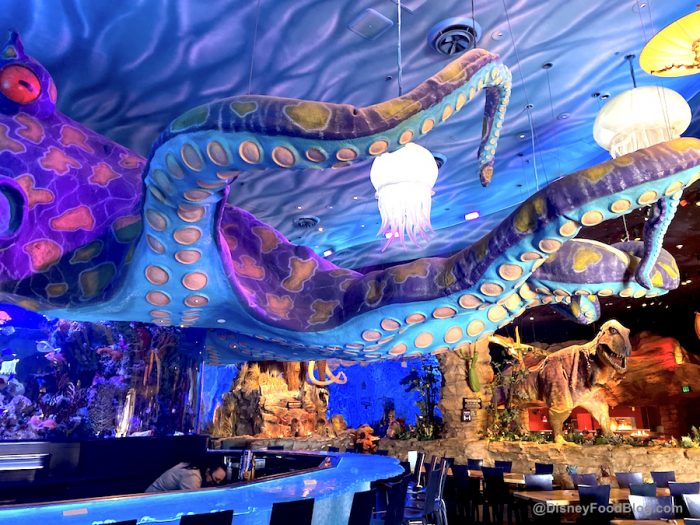 And how sweet are these jellyfish-looking light fixtures? How great would these things look in our caves, I mean homes! 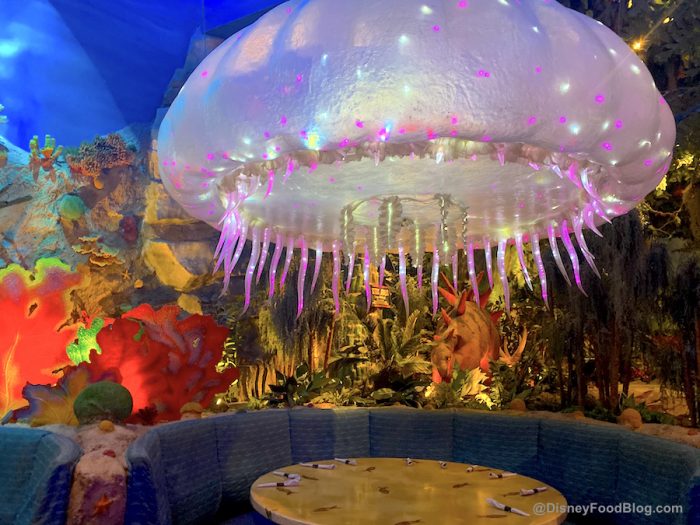 Parties were being distanced several tables apart when we stopped by. 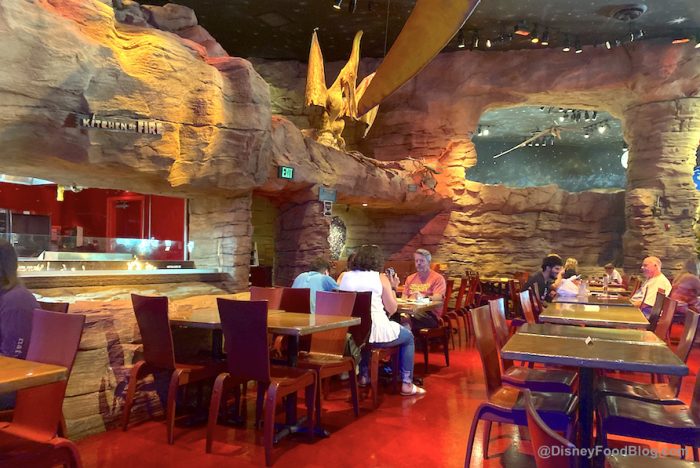 If you’re not coming to T-Rex for the atmosphere, consider asking to be seated outside the cave. Otherwise, almost everything you eat or drink will become the exact same color (bright blue or warm red). If you’re wondering, yes we found this out the hard way.

We noticed the restaurant has switched over to single-use paper menus, a more common and popular option at Disney Springs these days. 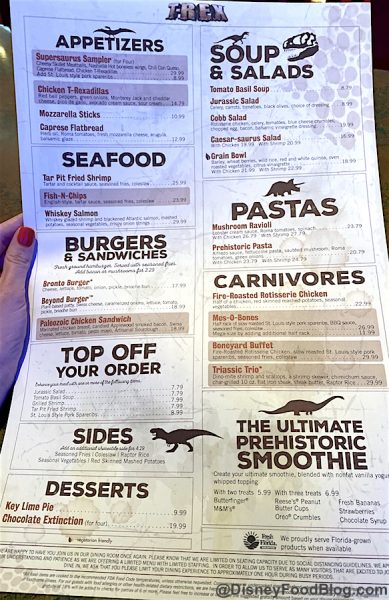 We ALSO noticed T-Rex was still offering its souvenir glassware that are included with the purchase of several drink options including one of our longtime favorite cocktails, the Cotton Tini! 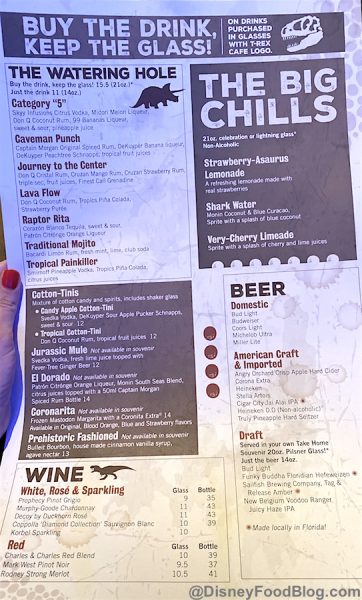 Cotton Tini: think cotton candy meets alcohol — plus you get to keep the cute plastic T-Rex shaker your server pours it from! The drink is extremely sweet and SUPER popular at T-Rex. It’s made from Svedka vodka, flavored DeKuyper Sour Apple Pucker Schnapps, and a splash of sweet and sour mix. 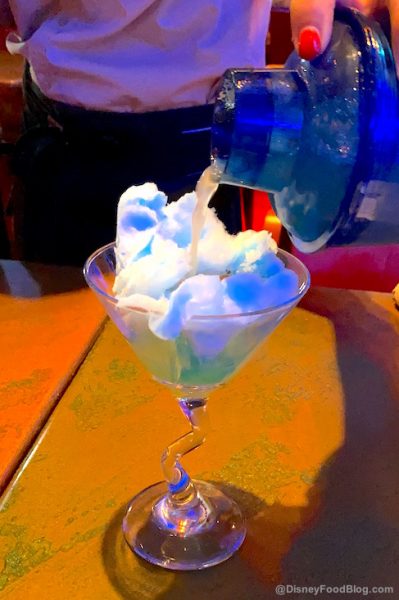 Then it’s shaken with ice and poured tableside over a fluffy cloud of cotton candy. 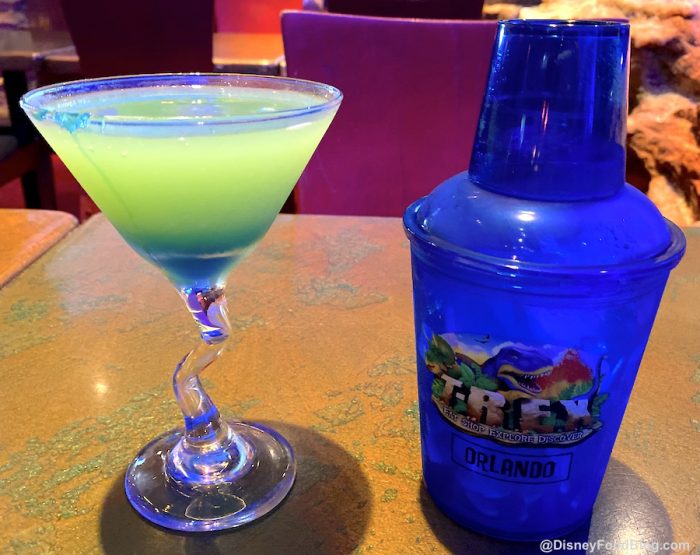 Not a bad drink AND a keepsake for $12! To us, it tasted tart and JUICY!

We ordered the vegetarian (or should we say herbivore) Grain Bowl along with a Paleozoic Chicken Sandwich. While waiting for our food to arrive, the server brought us a paper napkin with regular silverware rolled up inside. She also asked us if we needed any condiments since they aren’t keeping stuff like salt, pepper, or ketchup out on the tables.

Our Grain Bowl was the first to arrive featuring barley, wheat berries, wild rice, red and white Quinoa, and oven-roasted vegetables tossed with a citrus vinaigrette for $18.99. You can also get it with chicken for $21.99 or shrimp for $22.99. 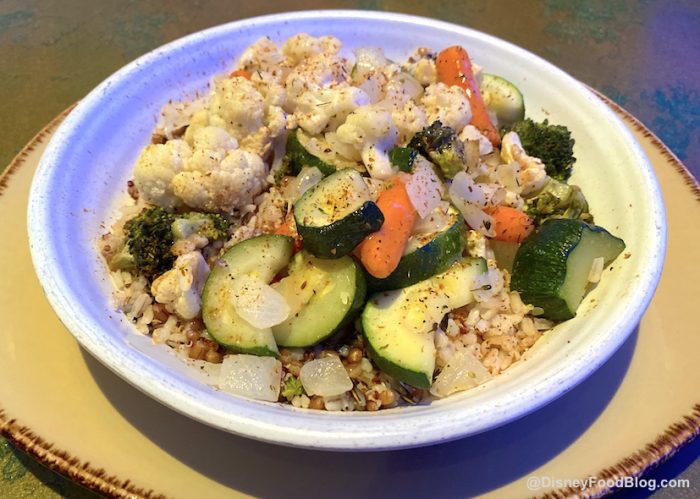 We gotta say, not a whole lotta flavor going on here but we were expecting this meal to be much more subtle and lighter than a lot of the rich stuff we’d been devouring lately (it’s hard to compete with BEER CHEESE). The veggies tasted crisp and fresh so if you’re in the mood for some a lighter option, this guy’s a good-but-less-exciting option. 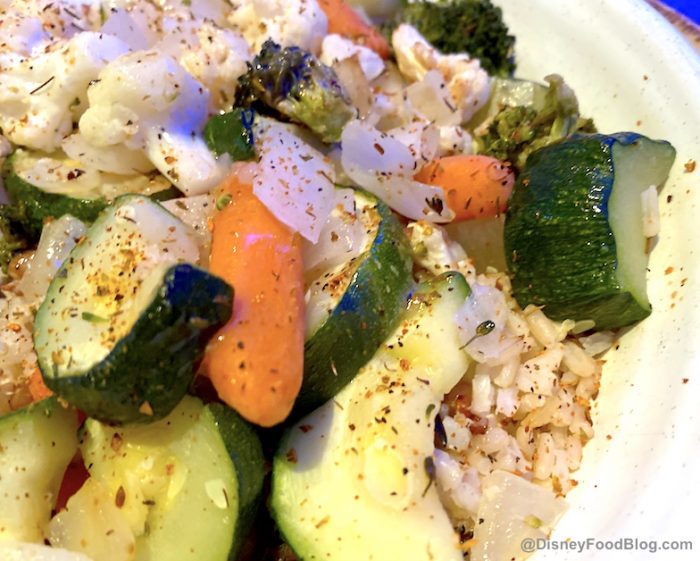 Next, we dove into our Paleozoic Chicken Sandwich. For $18.99, it included a marinated chicken breast, candied applewood-smoked bacon, swiss, lettuce, tomato, pesto mayo, and artisanal sourdough served with seasoned fries. 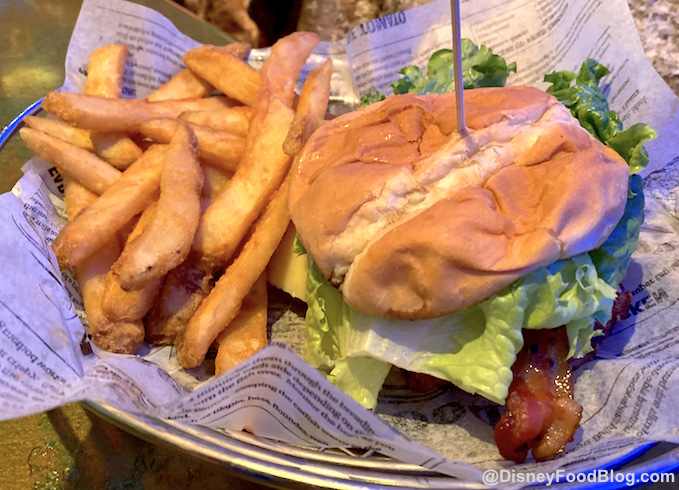 This was a really solid chicken sandwich for us. Although the bacon didn’t really look candied, its sweet and salty porky flavor really shined through. The portion was a nice size too! We were definitely going to require a “dino bag” to take our leftovers home with us! We thought the french fries were super yummy too with just the right amount of seasoning. 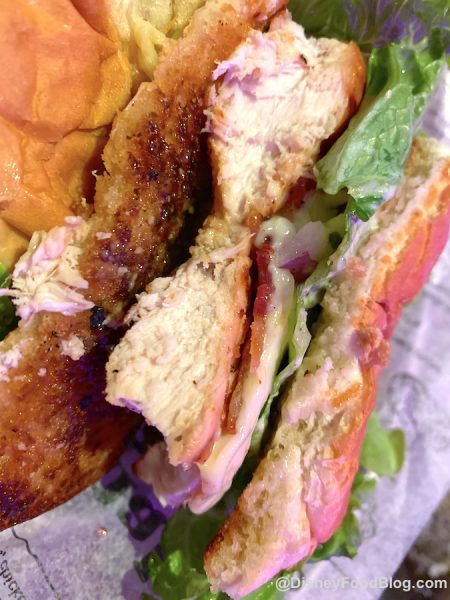 For a sweet end to our dino meal, we ordered the Cosmic Key Lime Pie for $9.99. 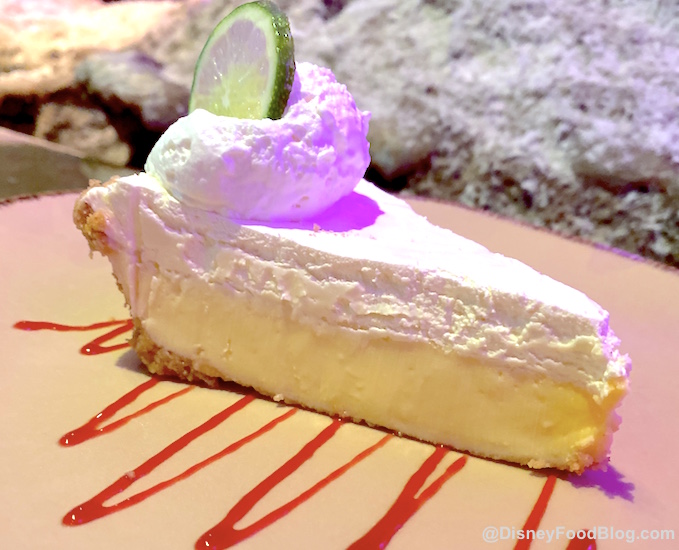 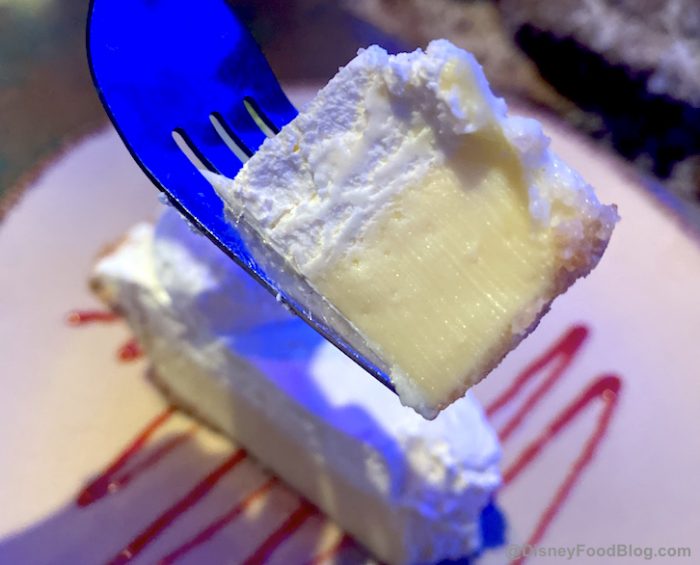 At the end of our meal, the server returned with our souvenir martini shaker which she had rinsed out for us and we said our goodbyes to our dining companion, the wooly mammoth!

Give T-Rex a Shot if: 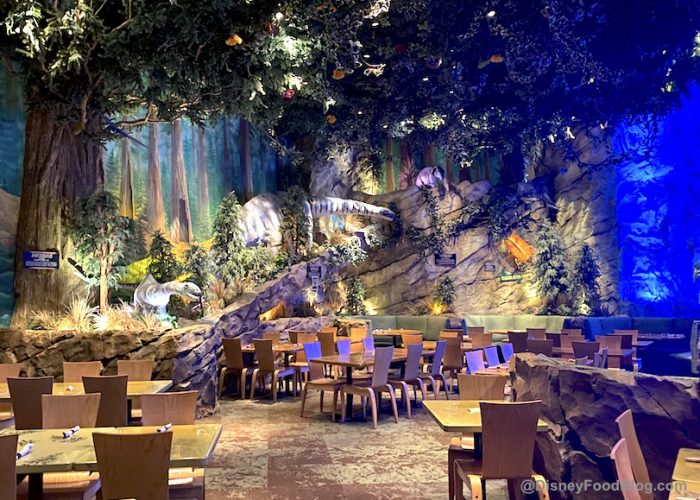 While there are many exciting dining options to try at Disney Springs, T-Rex might not be the most obvious choice, but it’s a solid dino two-thumbs-up from us (do they have thumbs?), especially if you have some little paleontologists in the making! Even adults can’t help but smile when confronted by some of these larger-than-life dino buddies. The food can be tasty (depending on what you get, Grain Bowls — not so much), and the crazy-fun atmosphere and Cotton Tinis might be the real reason people seem to keep coming back to T-Rex! 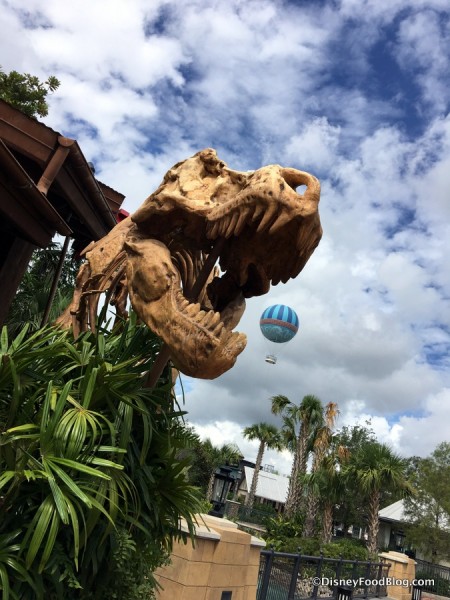 We’ve enjoyed our time at T-Rex today, but now we better get back to the future to see what other foods we can forage up! In fact, we recently spotted some unsuspecting Mickey Pretzels and other Disney parks treats at nearby Disney Springs watering hole which you can learn more about HERE!

Check out where else we ate in Disney Springs today here!

Have you ever supped with a wooly mammoth at T-Rex before? Let us know if you have in the comments below!