Hello 👋 from the A Taste of EPCOT International Food and Wine Festival! (We practically live here, it feels like.)

While we’re anxiously waiting to snag all those Figment and Chef Minnie items coming soon, the Food and Wine Festival is also bringing back more food booths across EPCOT. Of course, we couldn’t resist taking you with us to check out the returning and brand new menus at the booths on their OPENING DAY. While we already stopped over at The Alps, we’re heading over for a l’il taste of Spain in EPCOT too!

Spain has returned from last year’s Food and Wine Festival, buuut the catch is that there is a shorter…and slightly updated.. menu this year in the midst of all the changes happening around the parks. 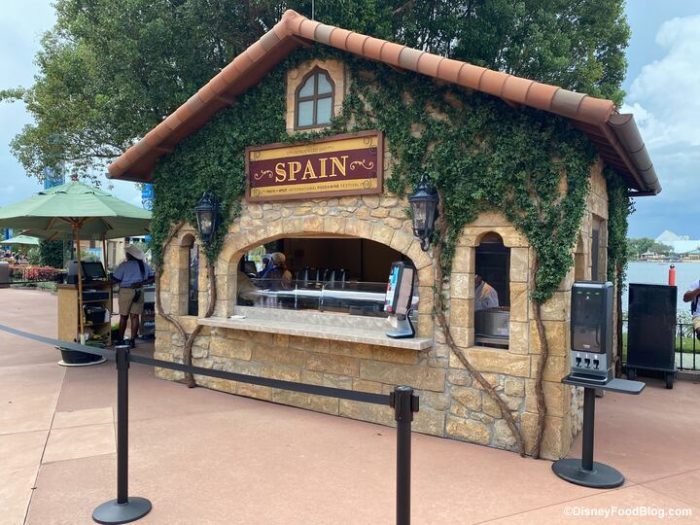 When guests enter the line, they will be asked to follow distancing measures and safety precautions before placing their order behind the plexiglass at the counter. 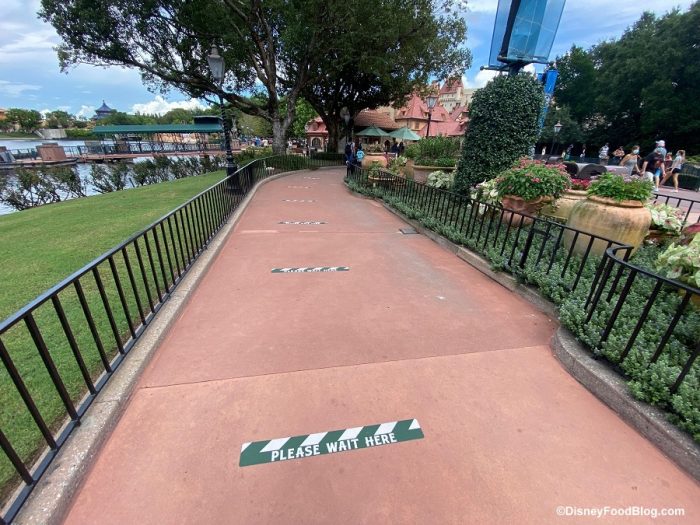 Although we’ve had to say goodbye to the Seafood Salad and Lagar de Bouza Albariño this year (RIP, friends), past food and drinks have still come back for the 2020 line-up. And, one of the biggest menu items has seen a bit of a simplified version at the Spain booth! 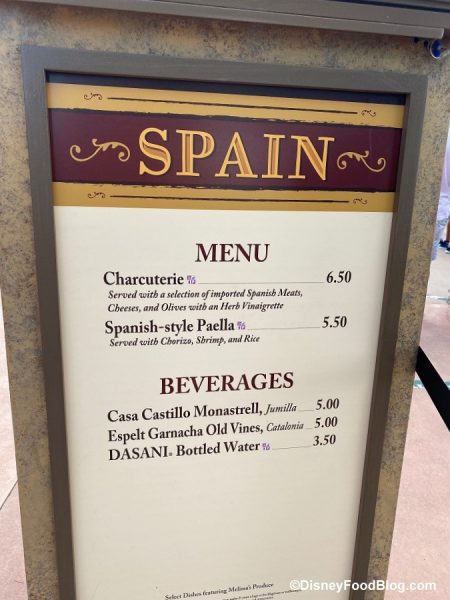 Last year, the Charcuterie was offered in a cone. However, 2020 has broken the dish down into a less complicated serving… in a cup. ;D The Charcuterie cup is filled up with imported Spanish Meats, Cheeses, Olives, and an Herb Vinaigrette for $6.50. 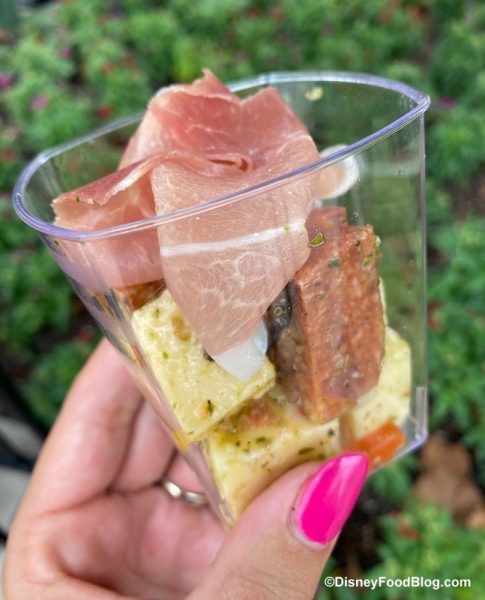 Although this cup may not look like much, we were SHOCKED by how filling and flavorful the Charcuterie was! There’s a lot more food inside than we expected, which packed so many wonderful flavors. The manchego is a harder cheese that has a great nutty taste compared to the saltiness of the meats. 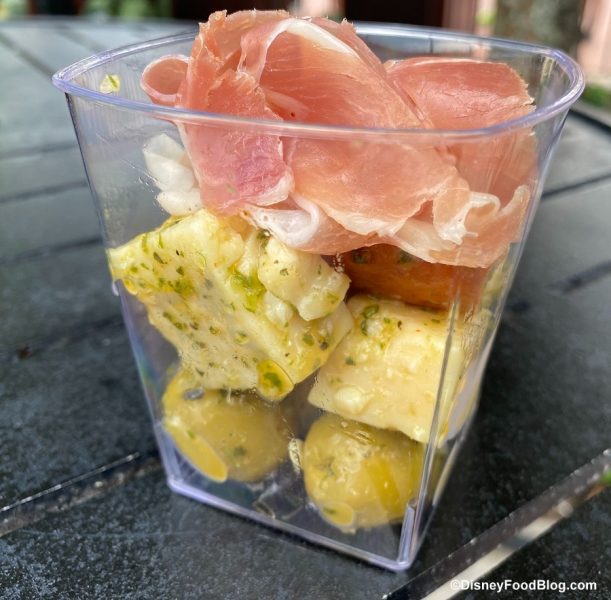 Charcuterie with imported Spanish Meats, Cheeses and Olives with an Herb Vinaigrette

The Spanish meats (very like prosciutto and salami) had great seasoning and a bit of olive oil that was worth it. This could easily be a great cup to share as a snack with someone, since it was filling for the size (and $6.50 price tag)! 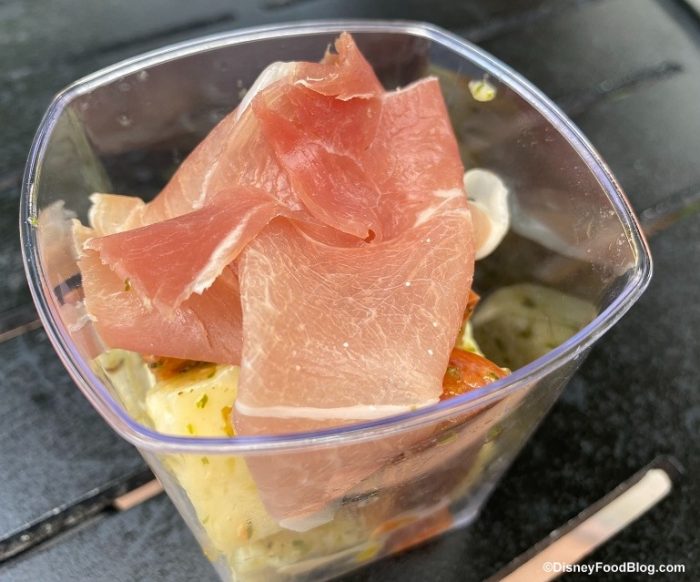 Charcuterie with imported Spanish Meats, Cheeses and Olives with an Herb Vinaigrette

But, the Spanish-style Paella has also returned with a few changes! While the Paella featured at the Spain booth previously had chicken, the snack has been mixed up with Chorizo, Shrimp, and Rice instead for $5.50 during this year’s festival. 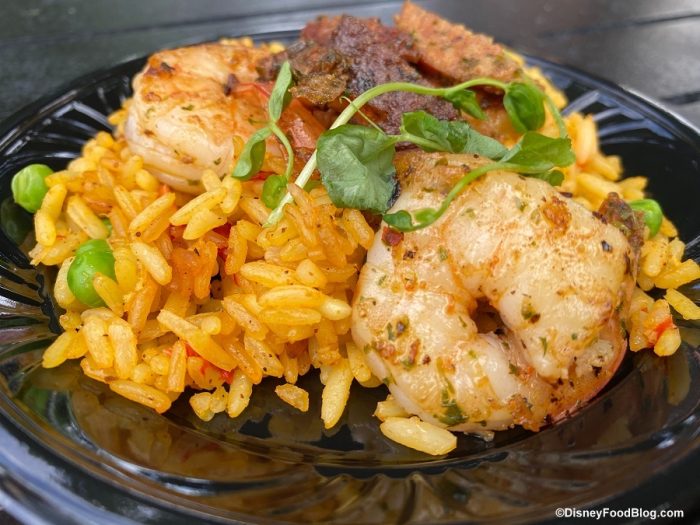 The Chorizo and Shrimp Paella was just as good as the chicken version from last year. The shrimp was big and packed with flavor, while the chorizo offered that needed hint of spice (since Disney doesn’t typically do MEGA spicy dishes). 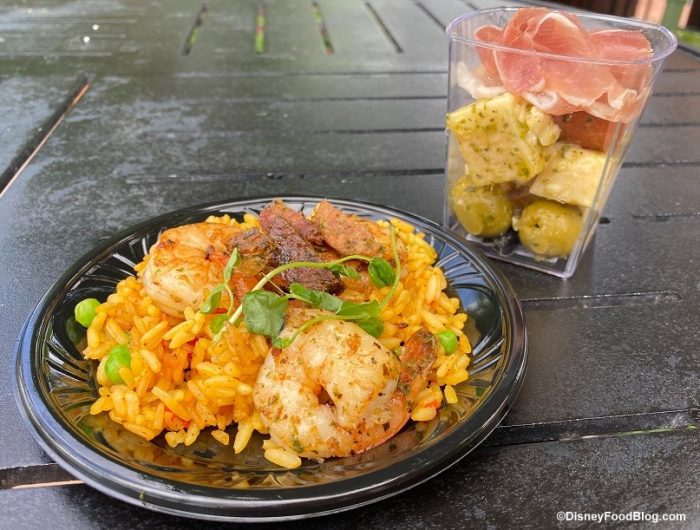 The sips on the menu still include the Casa Castillo Monastrell and Espelt Garnacha Old Vines for $5 each to follow all that great Spanish cuisine! Still, the snackin’ and sippin’ doesn’t stop at the Spain booth! We still have more places to visit around the Food and Wine Festival today. And, we’re taking you with us to look at it all, so keep following along on our EPCOT adventures!

Take a look at our reviews of ALL the booths at the Food and Wine Festival here!

What’s your favorite booth this year at the Food and Wine Festival? Let us know in the comments below!

« BIG NEWS and REVIEW! 🧀The Alps Booth is BACK🧀 At the EPCOT Food and Wine Festival! (And You Know We Got CHEESE!)
ALERT! Minnie Mouse Main Attraction King Arthur Carrousel Ears Are in EPCOT Today! »