It has been a WHIRLWIND day for us at Magic Kingdom! From scoring a Madame Leota sipper to trying The Grey Stuff Cupcake (IT’S DELICIOUS! Sorry, we had to.) at Gaston’s Tavern, we have been living our best lives. 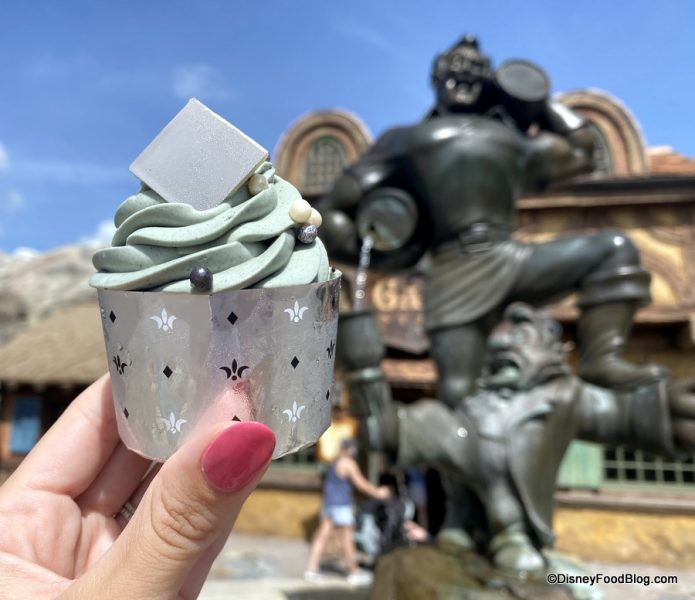 So, we thought to ourselves, we need to share all of this excitement with YOU! We’ve been taking lots of videos from the parks today and sharing them over on Twitter, and here are our favorites from our day in Magic Kingdom!

There’s something magical about taking those first few steps into Magic Kingdom. Walking through that tunnel and emerging in Town Square is something that NEVER gets old!

Headed into Magic Kingdom for the day! What do you want to see most? pic.twitter.com/EibOIbjf5Z

And we can’t forget about Cinderella Castle off in the distance! If your heart wasn’t pounding from walking through those tunnels, it DEFINITELY is now!

Click here to check out our first close-up look at Cinderella Castle in her new pink hue!

Get Your Ears On!

We’ve not-so-secretly fallen in LOVE with the new character cavalcades at each of the theme parks! While we miss our beloved parades, these frequent ‘happenings’ are a great way to wave at the characters throughout the day!

We love when a Character Cavalcade pops up! Who is your favorite character to spot? pic.twitter.com/URymWEoIr0

At Magic Kingdom, be sure to spot Mickey Mouse along with tons of other characters in these super fun mini-parades!

Click here to learn more about the character cavalcades!

We are officially in pumpkin season, friends! We began our spooky food tour around Disney World today with the Pumpkin Spice Mickey Waffle Sundae from Sleepy Hollow!

FYI, if anyone asks, yes, this is DEFINITELY a breakfast item. There are waffles in it, after all!

Heading to Disney World soon and want to try ALL the fall treats? Be sure to print out your FREE DFB Halloween snacks guide!

Like we mentioned earlier, one of the most exciting finds all WEEK was the new Madame Leota Sipper!

It’s the Madame Leota Sipper Cup! Get this from Sleepy Hollow for $15.99. 🔮 pic.twitter.com/QJUi1mP9e1

Click here to learn more about our new favorite sipper!

The Madame Leota Sipper wasn’t the ONLY spooky drink enhancement we found at Magic Kingdom today. We also picked up a pair of light up Oogie Boogie dice from Pinocchio Village Haus.

Oogie Boogie Light-up Dice from Pinocchio Village Haus – they give them to you wrapped up on the side so you can put them in your drink! pic.twitter.com/swwQehgLtW

With health and safety in mind, these l’il guys came pre-wrapped for us to add to our drinks ourselves!

At long last, Gaston’s Tavern reopened today at Magic Kingdom! We REALLY missed having a place in the park to grab a tasty cinnamon roll.

Gaston’s is officially open! 🎉 We are headed to get a cinnamon roll! pic.twitter.com/O1w150dwr4

But cinnamon rolls aren’t the only sweet treat you can find at the reopened Gaston’s Tavern, as we quickly discovered! What could be better than The Grey Stuff, the signature dessert from Beauty and the Beast as well as Be Our Guest Restaurant? How about a Grey Stuff CUPCAKE!?

That’s right, you can find this bite-size delight at Gaston’s Tavern!

Click here to read our full review of The Grey Stuff Cupcake from Gaston’s Tavern!

Popcorn! Get Your Fresh, Hot Popcorn!

Souvenir popcorn bucket collecting is serious business. So we HAD to share the news with you all that we spotted this year’s refillable buckets at Magic Kingdom!

We found the Purple Cauldron Bucket in Animal Kingdom yesterday, as well as this one over in Magic Kingdom! Keep your eyes peeled at the popcorn carts throughout the park!

You guys know we won’t hesitate to shine a light on the latest and greatest Minnie Ears! While the NEWEST Ears designed by Lily Aldridge are sold out online, there are plenty of these must-have accessories available in the parks!

We love looking at a gorgeous wall of Minnie Ears 😍 pic.twitter.com/F7MrnOHBIf

Click here to check out even MORE new Minnie Ears, and one of our favorite new color trends!

Back to the Basics

While we are clearly obsessed (in the best way possible) with all things pumpkin, sometimes it’s nice to return to the simple, classic Disney snacks, like Dole Whip, Popcorn, and of course, the Mickey Pretzel.

We just can’t say no to this iconic treat! Something about a pretzel being shaped like Mickey makes it taste WAY better, right?

Ever wonder which Magic Kingdom land is the best for snacks? Find out here!

We’re sorry if these next couple of videos get a certain song stuck in your head, but we can’t help ourselves!

We didn’t realize how much we missed Disney World until we stopped by The Enchanted Tiki Room! When your eyes are watering after hearing the first few notes, you KNOW you’ve been away from Disney World for too long.

Looking to create your very OWN Enchanted Tiki Room? Check out these tropical hideaway essentials!

While we were hanging out in Adventureland, we decided to hop on Jungle Cruise for a quick spin around the rivers of Africa and Asia!

With limited park capacity, getting on all the rides in Magic Kingdom has never been easier! Wait times have stayed really low. We were able to get onto Pirates of the Caribbean right after!

Drink up me hearties, yo ho! Yo ho, yo ho, a pirate's life for me! pic.twitter.com/LRIrw3QcjS

Yo ho, yo ho, a pirate’s life for us indeed!

Click here to check out an Adventureland-themed MagicBand available for purchase!

Time for a Frightfully Tasty Burger!

Halloween in Disney World isn’t JUST about the sweets (although they are certainly one of our favorite parts). You can also score some savory dishes, too, like the Mickey Monster Mash Burger at Cosmic Ray’s Starlight Cafe!

We can’t get enough of the little Mickey face seared onto the burger bun!

Take a look at the spooky food landing at Disney World this Halloween season!

We’re Off to Neverland!

One of the easiest ways to spot just how NOT crowded it has been these days in Magic Kingdom is to check out the wait time for Peter Pan’s Flight.

Who is up for riding Peter Pan? pic.twitter.com/mZ4kPRgnFc

Easily one of the most popular rides in the park, its wait time USUALLY exceeds one hour every single day. Today, we got on in a matter of minutes!

And just like that, we were flying off to Neverland!

Taking a “quick trip” on Peter Pan’s Flight is something we never thought we would experience in 2020, but anything is possible these days!

Click here to read about the RETURN of one of our favorite Peter Pan-inspired treats!

While we would like to think that ANY day is a beautiful day to be in Disney World, it’s still that time of year where you have to expect a daily downpour. And BOY did it rain on us in Magic Kingdom today! While waiting in line for Seven Dwarfs Mine Train, we were notified that some Guests may not be able to ride due to the weather!

In line for Seven Dwarfs Mine Train – they just made the announcement that people in line might not get on because of weather. ⛈ pic.twitter.com/NUf5Bs0bal

We finally made it inside, which made us hopeful that we would be able to get on…

Unfortunately, we never got to ride (cue our tears).

And when we stepped back outside…we understood why they stopped sending trains into the mine.

It was raining juuuuuuust a little bit (but we managed to get an awesome video of Cinderella Castle! We wish we could all be just as gorgeous in the pouring rain).

She’s pretty even in the rain. pic.twitter.com/AzF9NJXvdk

And with that, we departed Magic Kingdom. We may have been a little soggy, but it was just as magical of a time as it always is!

Until next time, Magic Kingdom! Thanks for joining us on our video tour around the park!

Click here to find out exactly WHEN all of the fall decorations will officially return to Magic Kingdom!

What is your FAVORITE thing to do in Magic Kingdom? We know it’s hard to pick, but share ONE thing in the comments (okay, if you can’t pick just one, we’ll take a list of favorite things, too!).