After weeks of back and forth between California theme parks and Governor Gavin Newsom’s office regarding safe reopening guidelines, we continue to see significant disagreements between the two regarding readiness.

Today, Governor Newsom noted in a press conference that there’s “no hurry” to put out guidelines, and “we’re going to be stubborn about it.” Newsom’s reasoning for this stubbornness is a focus on being “led by a health-first framework,” and “let[ting] science and data make that determination.”

Tonight, Disney has reacted via their twitter account through a statement from Disney’s Chief Medical Officer, Dr. Pamela Hymel. 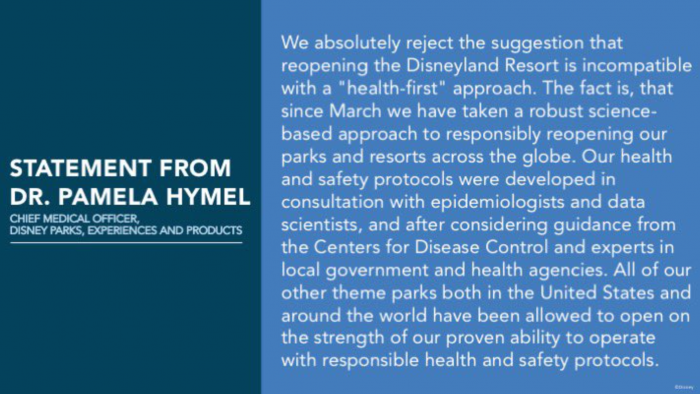 In the statement, Dr. Hymel notes that the Walt Disney Company “absolutely reject the suggestion that reopening the Disneyland Resort is incompatible with a ‘health-first’ approach.” She notes that the company has made “science-based” decisions since closing their domestic theme parks in March.

Her statement ends with the reminder of a proven track record. “All of our other theme parks both in the United States and around the world have been allowed to open on the strength of our proven ability to operate with responsible health and safety protocols.”

Currently, all Disney-branded theme parks around the world, including Shanghai, Hong Kong, Tokyo, and Orlando, have reopened except for Disneyland. The park proposed a July 17th opening date originally, which was ultimately not approved by the governor.