For Disney fans around the globe, there are many important dates throughout the year, from movie release dates to major opening dates at Disney Parks. But for investors and those interested in Disney’s financial performance, the Quarterly Earnings Calls are among the biggest days of the year!

Today, Disney discussed their fourth quarter as well as fiscal full year 2020 financial results in a public audio webcast. The company’s fourth quarter and fiscal year ended in late September, meaning that this earnings call gave us an even BIGGER picture at how 2020 has impacted the Company.

But what were the biggest key takeaways from today’s earnings call? Let’s break it down!

In Q4, Disney reported revenues of $14.7 billion dollars, compared to Q4 earnings of $19.1 billion this time last year (down 23%). When taking into consideration the loss from continuing operations before income tax, that leaves Disney with a net loss from continuing operations of approximately $710 million for Q4. For the Fiscal year 2020, Disney reported a net loss of $2.8 billion. 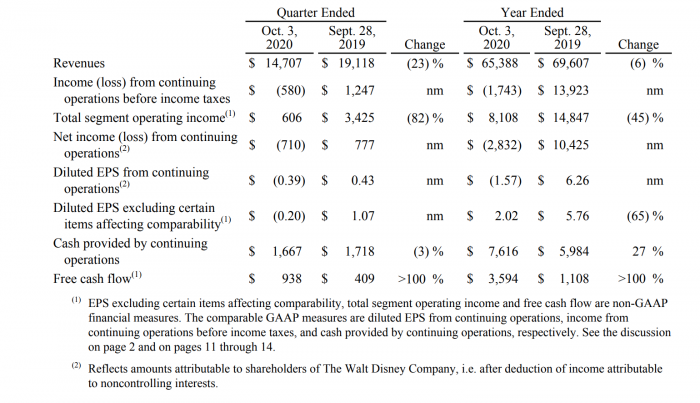 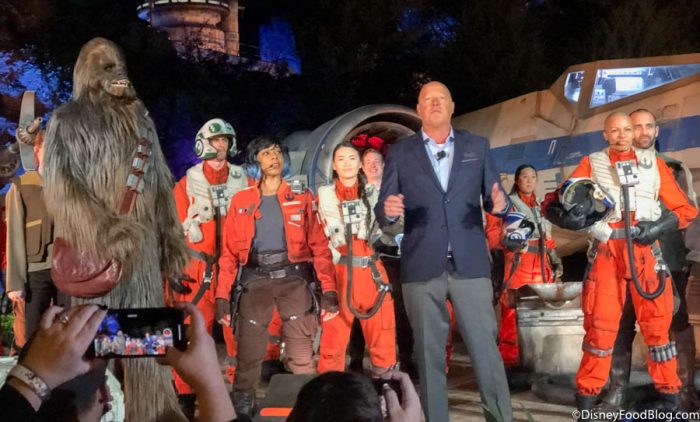 It was also unveiled during the earnings call that Disney will not be issuing dividends in January of 2021, although the payment of dividends continues to be a part of the long-term strategy for Disney. In terms of expenditures moving forward, Disney announced that much of their spending in Fiscal Year 2021 will be on safety measures, specifically for employees, talent, and guests. This spending will amount to approximately $1 billion.

Looking further into Fiscal Year 2021, it was noted that Disney expects their financials to still be impacted by COVID-19, but that the “recovery of theatrical exhibition, confidence in consumer travel, and the continued resumption of live sports” will be key figures in stabilizing operations.

We learned quite a bit of information about how Disney Parks, Experiences, and Products was performing in the Company’s Quarter Three earnings call. We learned that Florida locals were making up roughly 50% of Disney World’s attendance in its earliest weeks of reopening, and that the segment reported a multibillion dollar loss due to the extended park closures.

Since then, we also learned about the devastating layoffs that impacted 28,000 Cast Members across Disney’s Parks, Experiences and Products division. 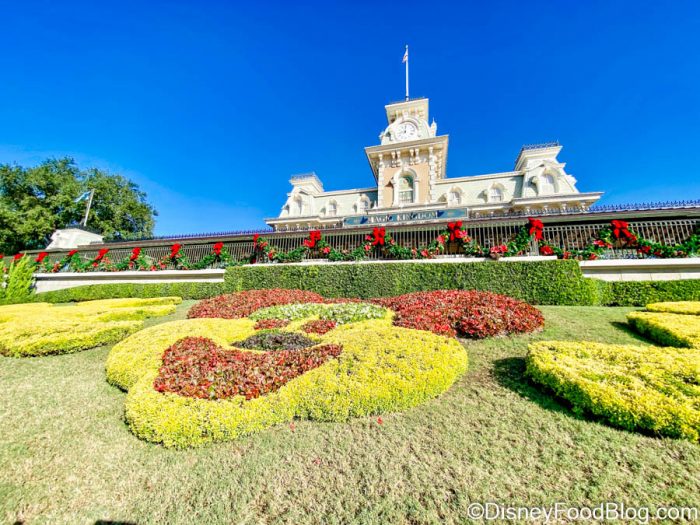 According to Disney’s report, “The most significant adverse impact in the current quarter and year from COVID-19 was approximately $2.4 billion and $6.9 billion, respectively, on operating income at our Parks, Experiences and Products segment due to revenue lost as a result of the closures or reduced operating capacities.” 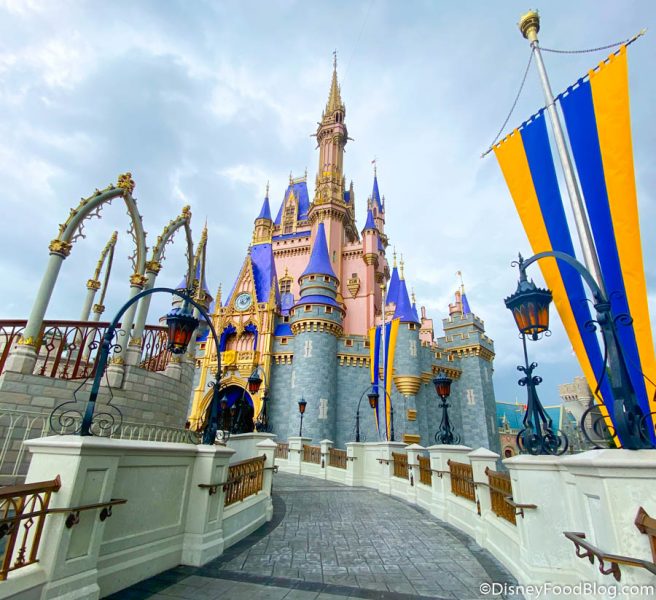 Chapek did take the opportunity to make a statement on the current status of Disneyland. As he stated that the progress in California is “disappointing,” Chapek noted that “Frankly…we believe state leadership should look objectively at what we’ve achieved successfully based on science.” Christine McCarthy noted that they currently anticipate Disneyland Resort will remain closed at least through the end of of the first quarter of Fiscal Year 2021.

Another major reveal during the earnings call was the increase in park capacity in Disney World. Chapek noted that while Disney World opened in July at 25% capacity, that has since increased to 35% capacity. 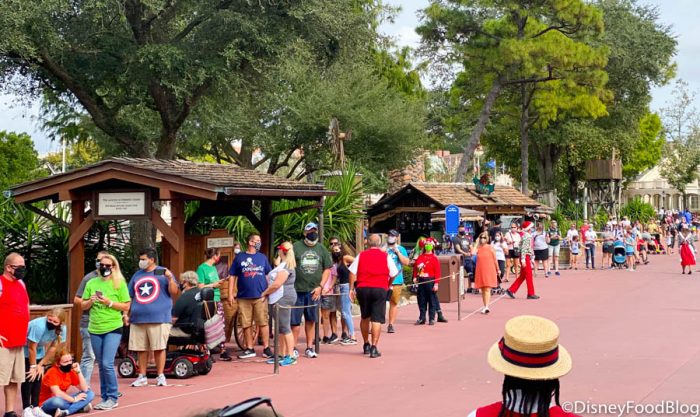 Disney seems to be encouraged on forward bookings at Disney World, citing consumer trust and demand. During the earnings call, it was revealed that Thanksgiving week was nearly booked at 100% capacity given their current restrictions, and that the remainder of Q1 was booked at approximately 77% capacity. 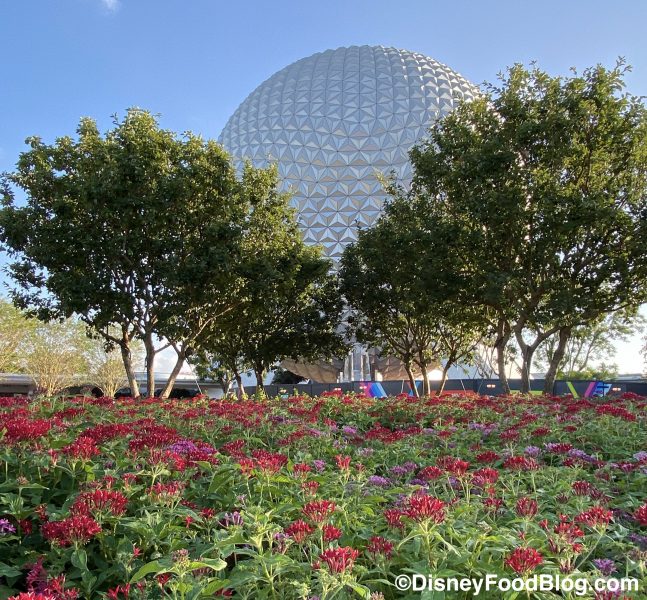 Disney also shared in the earnings call that of their theme parks that have reopened in 2020, Disney World, Shanghai Disneyland, and Hong Kong Disneyland achieved a net positive contribution in Q4, while Tokyo Disney Resort and Disneyland Paris did not. 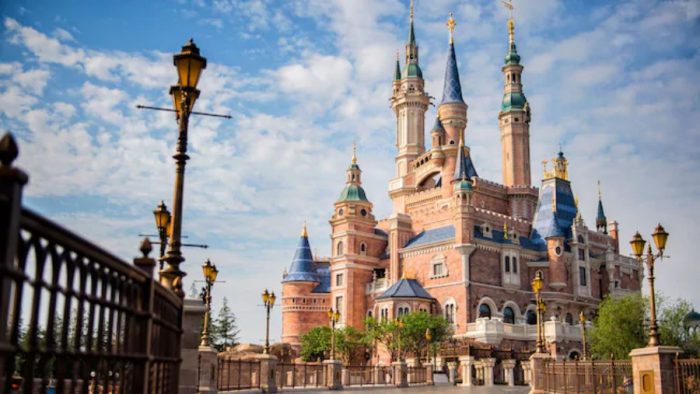 Chapek also commented on Disney Cruise Line, which falls into the Parks, Experiences, and Products division. He noted that the new CDC guidelines had put in place delays beyond what they were hoping, but that there was now a light at the end of the tunnel. 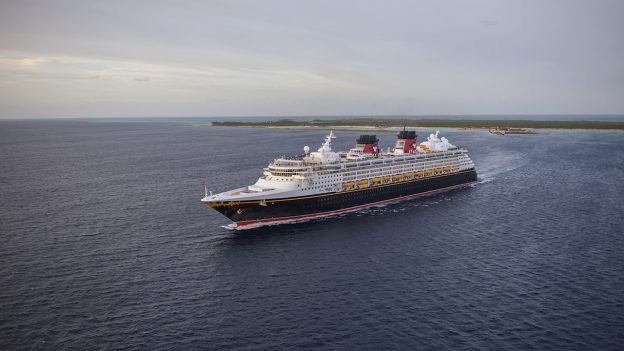 Chapek spoke about the three upcoming ships: The Disney Wish, now scheduled for a summer 2022 arrival after facing significant delays, and two additional ships, slated to arrive in 2024 and 2025, both facing six-month delays.

Click here to read more about the layoffs that impacted 28,000 Disney Cast Members

Disney’s earnings report states that Media Networks revenue was up $4.7 billion but overall operating income was down 7% to $1.2 billion for Q4. Disney states that there was an increase in programming and production costs, “due to the recognition of rights costs related to NBA and MLB programming rescheduled from the third quarter into the current quarter, partially offset by the deferral of rights costs related to the shift of college football games to fiscal 2021, both as a result of COVID-19.”

There was also affiliate revenue growth in Q4, largely due to a 53rd week that added one extra week to the quarter.

Disney’s Studio Entertainment segment, under which brands such as Walt Disney Studios, Pixar, Marvel, and Lucasfilm reside, has seen drastic shifts in operations amidst the global pandemic. Disney had recently announced that the upcoming Pixar film Soul would skip its theatrical release in the U.S. and go straight to Disney+, the same fate that the live action remake of Mulan faced earlier this year.

Chapek noted in the earnings call that they were very pleased with results of Mulan, despite controversy surrounding the film worldwide. In addition, he noted that the decision to move Soul to Disney+ was as a nice gesture to the existing subscriber base during the holiday season. 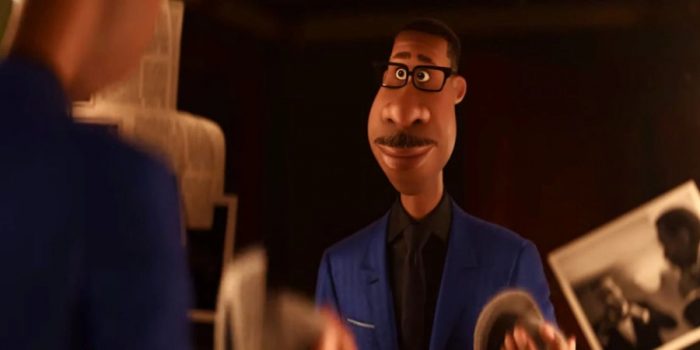 Chapek also pointed out that Studio Animation was largely able to continue post-production work uninterrupted from home. Live–action productions have been able to resume as well, although conditions surrounding the pandemic may result in impacts on production timelines in the future.

Still, earnings for Q4 were down significantly compared to the same quarter last fiscal year. In total, “Studio Entertainment revenues for the quarter decreased 52% to $1.6 billion and segment operating income decreased 61% to $419 million.” It was emphasized that earnings were markedly down when you consider that major titles such as The Lion King, Toy Story 4 were released in the prior-year quarter. 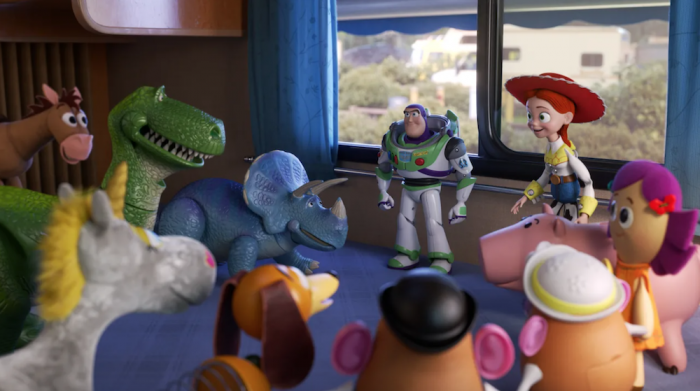 While revenue was significantly down, the earnings report states that “lower revenues due to the deferral or cancellation of significant film releases as a result of theater closures were partially offset by lower amortization, marketing and distribution costs for both the quarter and year.”

This is the first earnings call since CEO Bob Chapek announced that the Company’s priorities would be shifting towards streaming. Disney+ and the rest of the Direct-to-Consumer segment was clearly the bright spot for Disney in 2020, and all signs point to a continued investment in this division in the future. The Company noted in their earnings report that direct-to-consumer has been “the real bright spot,” and “is key to the future of our company.”

We can expect to learn a lot more regarding Disney’s long-term strategies with Direct-to-Consumer and other information on the Company’s reorganization at their Investor Day event, set to take place on December 10th.

Did you listen in to Disney’s Earnings Call today? What were your biggest takeaways? Let us know in the comments!