Guess where we are??? 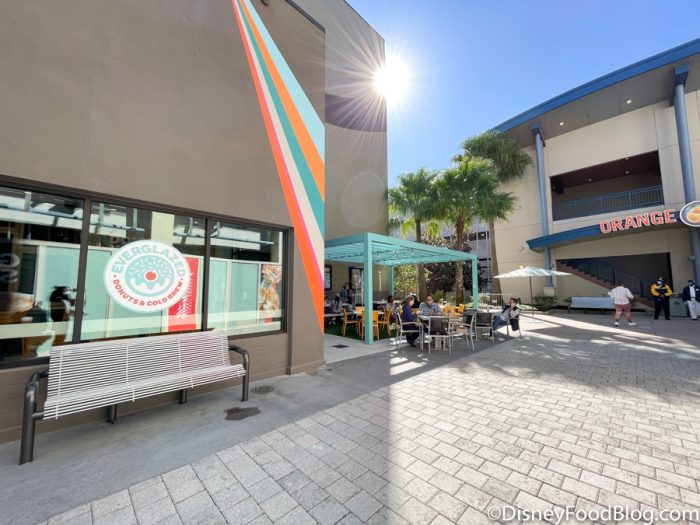 We’re BACK at Disney Springs’ newest restaurant today! You might remember when we reviewed Everglazed Donuts and Cold Brew yesterday. Today, we’re back to try a few more items, and we’re bringing you MORE thoughts on those eats!

First up, we’re gonna touch on a few things we learned from the manager this morning. This spot is sticking to the standard menu of baked-daily donuts for now but will be doing seasonal offerings eventually. Yesterday’s most popular donut was the Peanut Butter Explosion Donut! 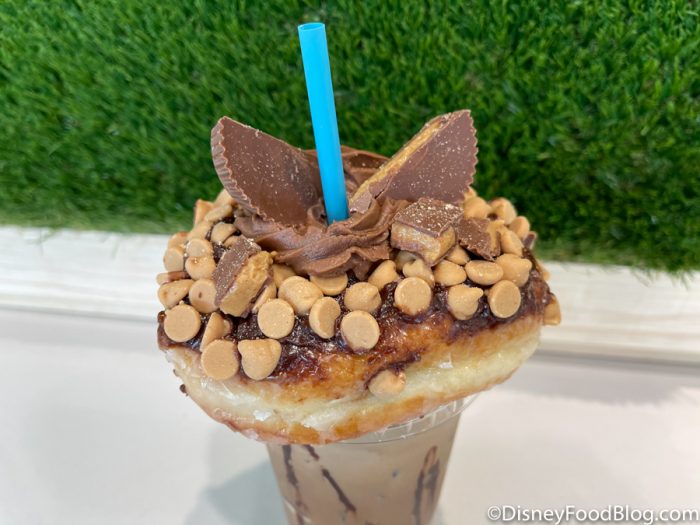 The General Manager has been working at Disney for years and has been in the industry his entire life. Beyond that, the spot hired several Cast Members for the baking team. 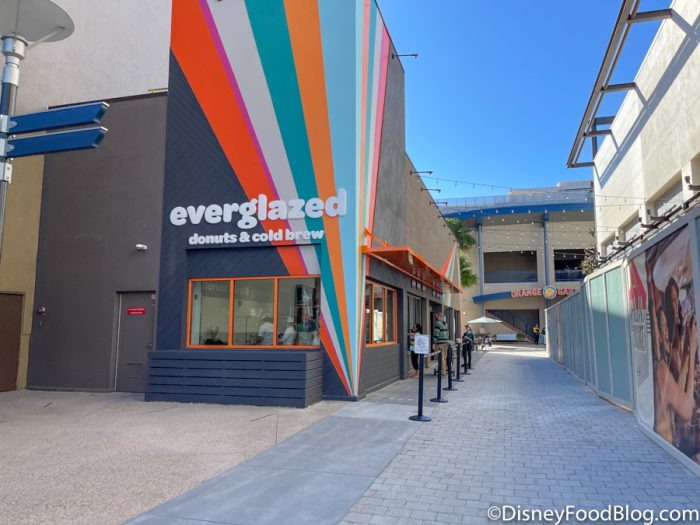 One thing to note is that there are no gluten-free offerings on the menu for now. Prior to opening, they tested three different gluten-free donut options without success. The manager mentioned that they know how important it is so they are working on it. 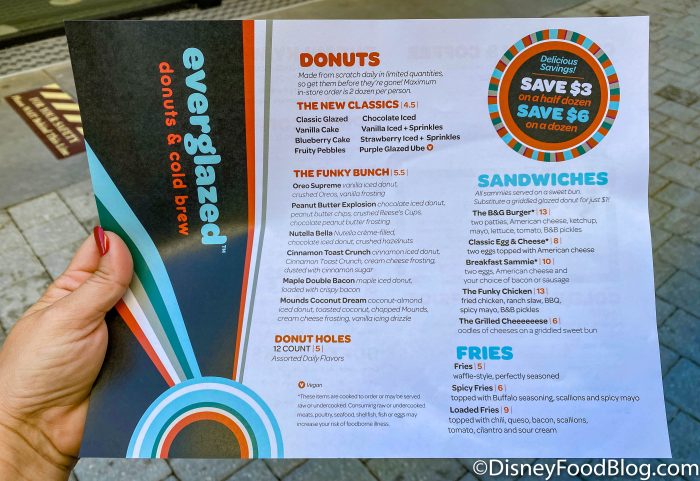 But, let’s jump into those EATS!

Yesterday, we gave The Grilled Cheeeeeese a try in the sandwich department for $6 (plus $1 to get it on a griddled donut instead of a bun!). This eat was OUR FAVORITE thing we tried! 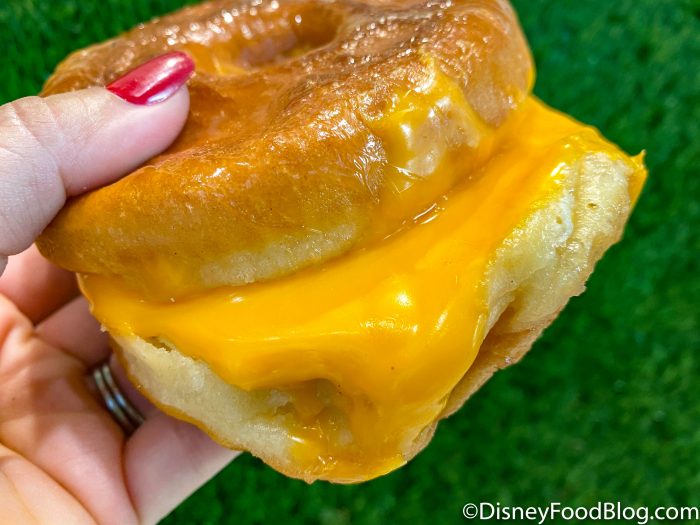 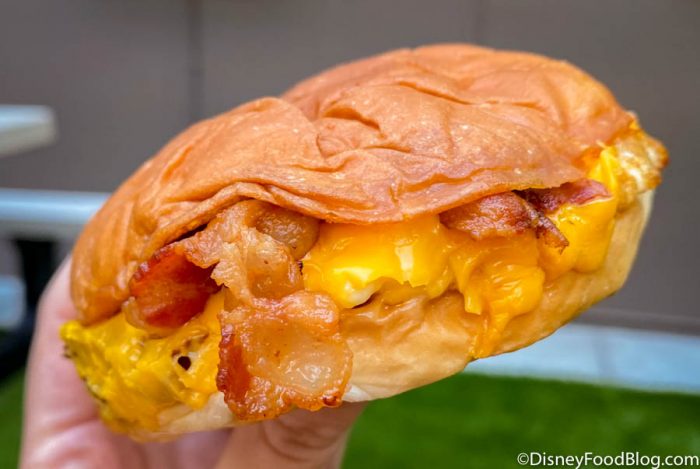 We were actually really surprised by how good this sandwich was! Honestly, we were very impressed. The manager mentioned that the quality breakfast sandwich was a priority since Disney quick-service breakfast is hard to find. The sweet bun reminded us of Hawaiian bread. We’d also say that this option had the perfect amount of each ingredient. But we will note, $10 is pricey for a breakfast sammie, even in Disney World. 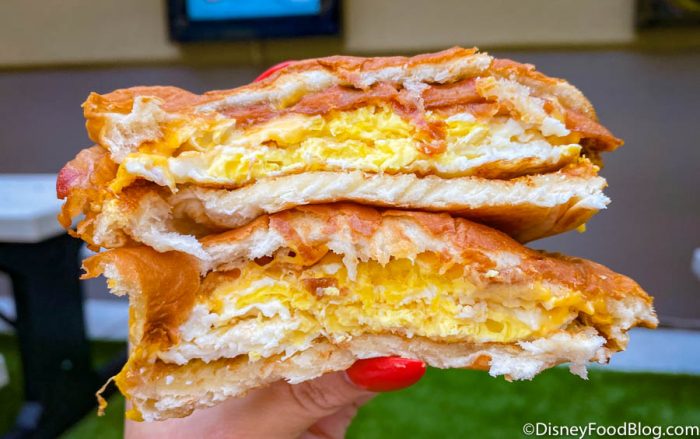 Then, it was on to The Funky Chicken to give this $13 combo of fried chicken, ranch slaw, BBQ, spicy mayo, and bread and butter pickles a try. 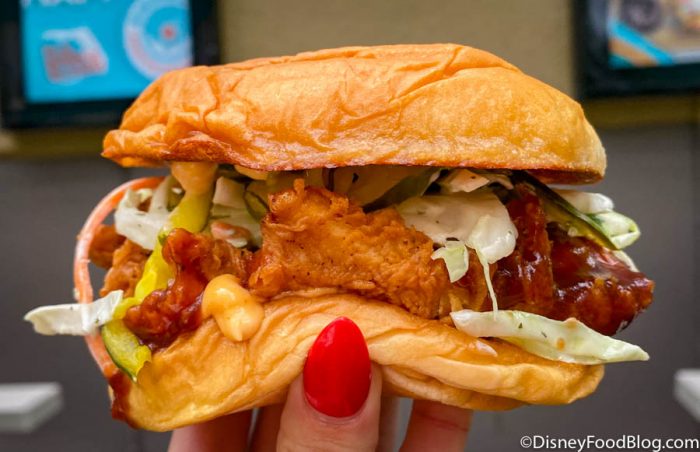 We’re not super surprised at this point, but this sandwich was also SUPER good. Our one complaint was that we would have liked it just a liiiiiittle but spicier — like if the mayo had a bit more of a kick. 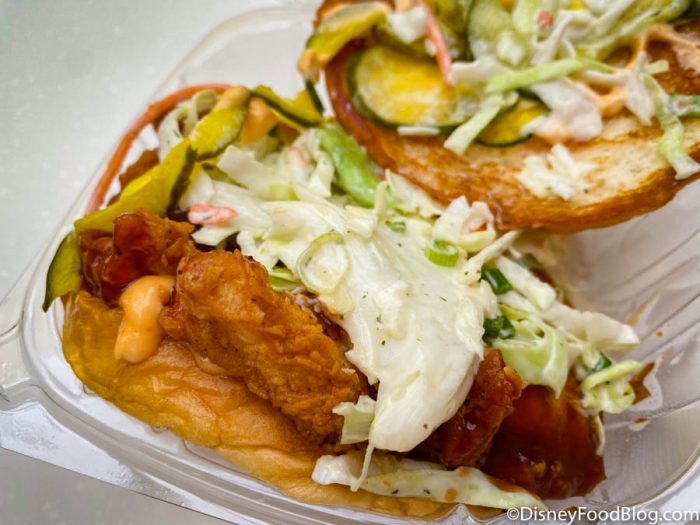 Our reporter loves slaw, so that was a big bonus on the sandwich for her. The slaw wasn’t too runny either, which we considered a plus. We also might’ve liked a thicker piece of chicken but it was SO yummy. Overall, this is a very enjoyable sandwich. Again, we will note that this is $13 and doesn’t come with a side or drink. There is a good amount of meat and it should fill you up though. 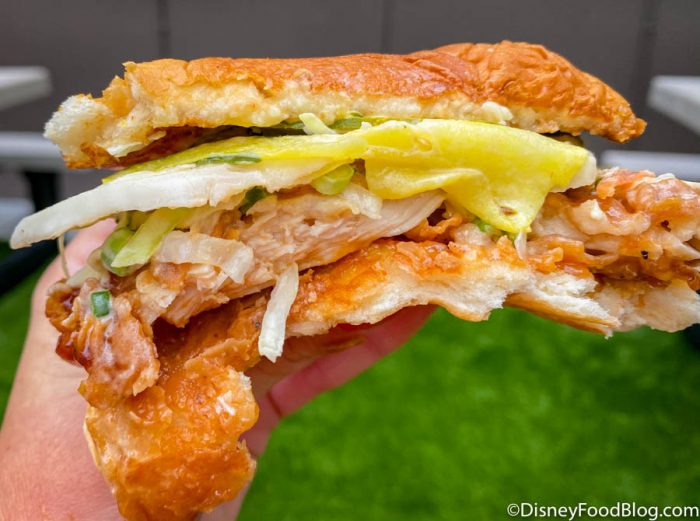 Let’s take a look at the donuts we tried today!

As for donuts, on opening day we checked out the Oreo Supreme Donut, the Nutella Bella Donut, the Cinnamon Toast Crunch Donut, and the Maple Double Bacon Donut for $5.50 each; plus the Fruity Pebbles Donut and the Purple Glazed Ube Donut for $4.50 each. Oh, AND we got to try the Peanut Butter Explosion Donut on top of our coffee. 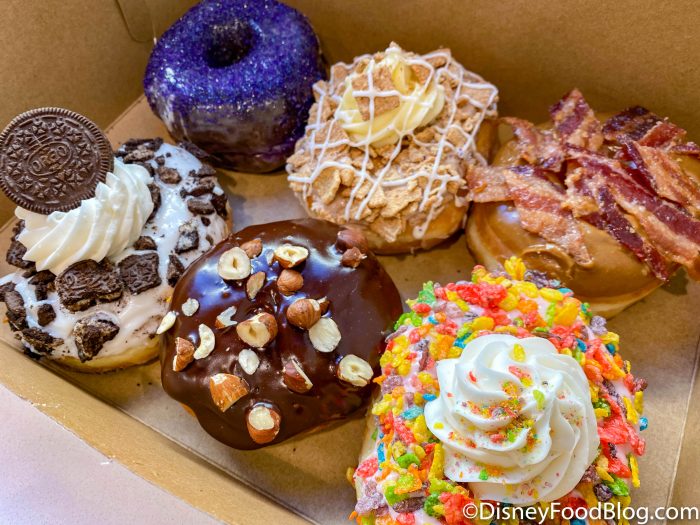 Today, we got some of our favorites again AND opted to try the Classic Glazed Donut, the Chocolate Iced Donut, the Blueberry Cake Donut, and the Mounds Coconut Dream donut. 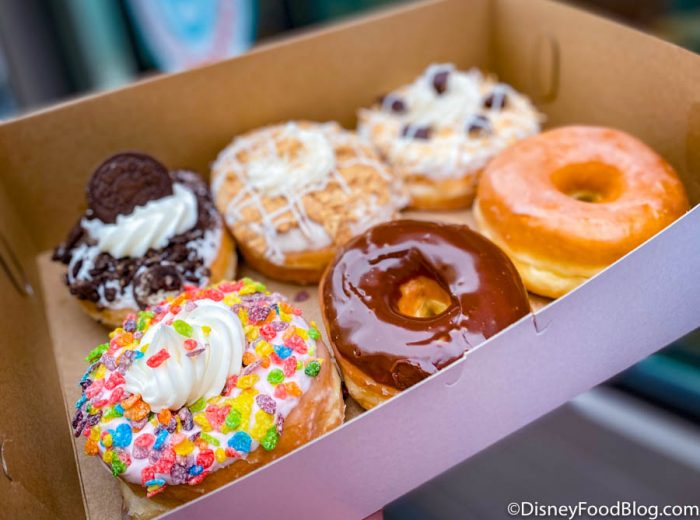 The Classic Glazed Donut and the Chocolate Iced Donut are each one of The New Classics offerings for $4.50. This, to us, is a donut in its purest form. So, how do these classic options hold up without all the bells and whistles? 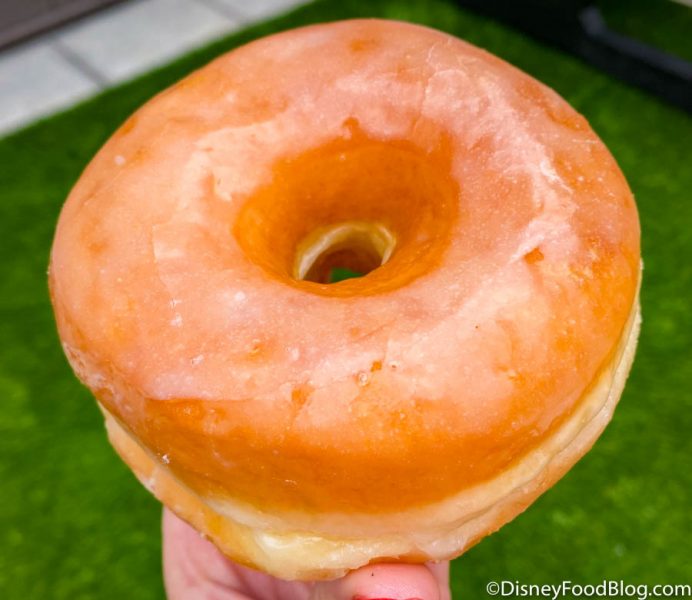 Answer: Pretty darn well. Both of these were really tasty treats. They were very, very light. If you prefer a simple donut — go for the classic or the iced chocolate. They were really fresh and ours were even still warm since we were there early! 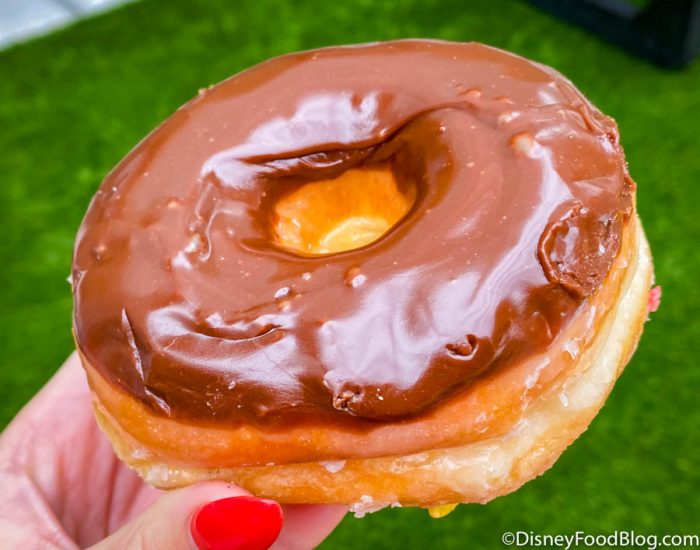 The manager at the event let us know that the Blueberry Cake Donut, also a $4.50 New Classic, was their favorite and we just might agree. This is a have-it-in-the-morning-with-a-cup-of-coffee kind of donut. It’s another great choice for those who prefer their donuts a little old school! 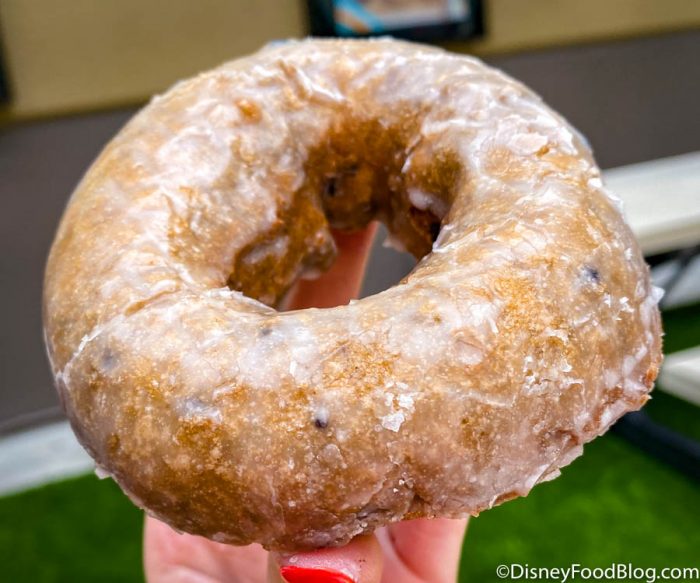 Everglazed’s specialty donuts are called The Funky Bunch and we tried one new one today. The Mounds Coconut Dream Donut (a coconut-almond-iced donut with toasted coconut, chopped Mounds, cream cheese frosting, and cinnamon sugar) is available for $5.50, and if you love coconut, this is a must-try. 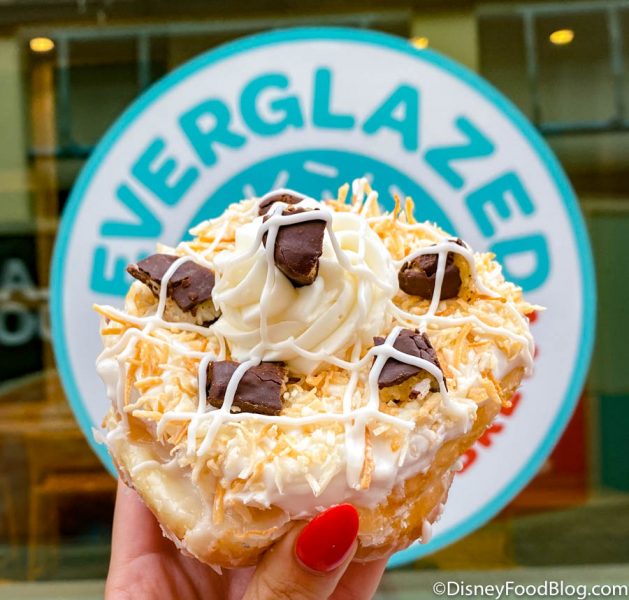 It’s a little over-the-top (Are we surprised?), but it’s a super fun flavor combination. You’re looking at lots and lots of coconut piled high on cream cheese frosting. It was SUPER rich. We especially liked the almond flavor! 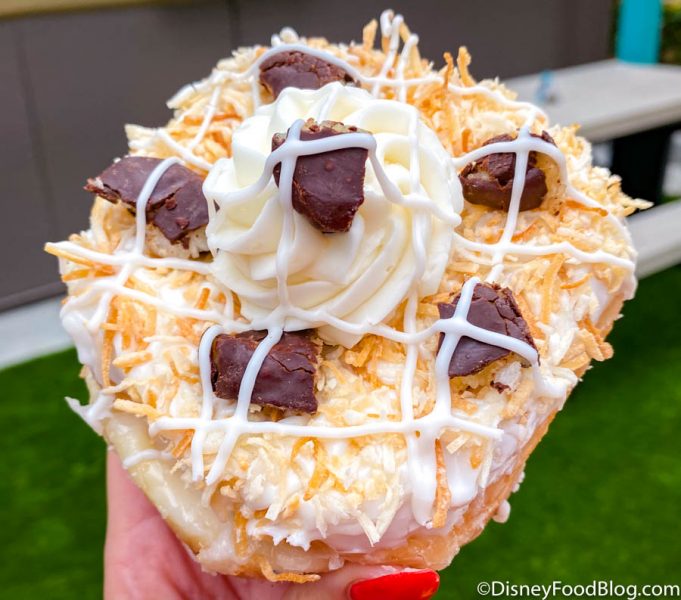 So, on day two of trying out Everglazed, how did it measure up?

There are still a few things we haven’t tried on the menu at Everglazed so hopefully, we’ll be stopping in again soon to try more. Overall, we’re still liking the options on this menu — and not-so-much liking the prices. We compared Everglazed donut prices to a few others and, sure enough, they’re on the high side. 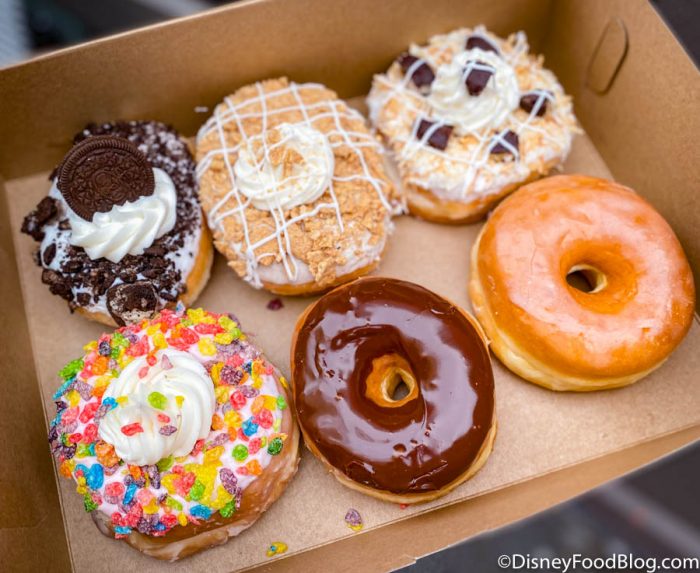 The big wins at this spot are the sandwiches (served on a donut instead of a bun for an extra $1!). We’re especially happy that there’s a new basics breakfast option in Disney Springs with that Breakfast Sandwich. 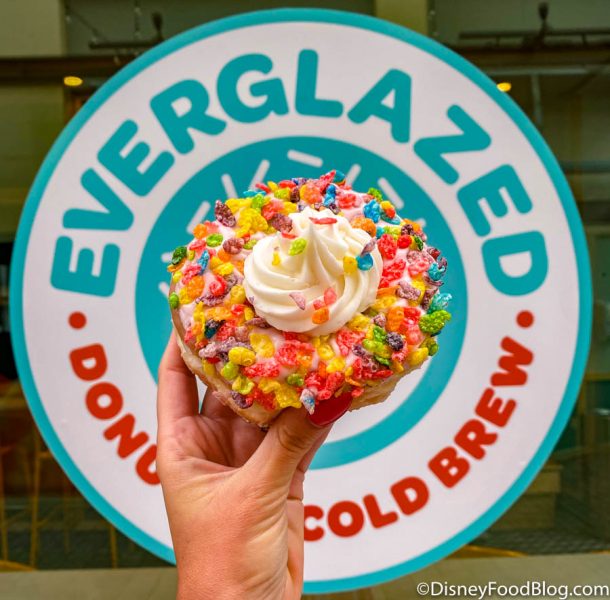 Our take from this morning is pretty in line with yesterday’s review otherwise. Everglazed is good, but it’s not necessarily go-out-of-your-way good or wait-in-a-four-hour-virtual-line good (like Gideon’s Bakehouse). These donuts are tasty treats — if a little splurgy from a price perspective. 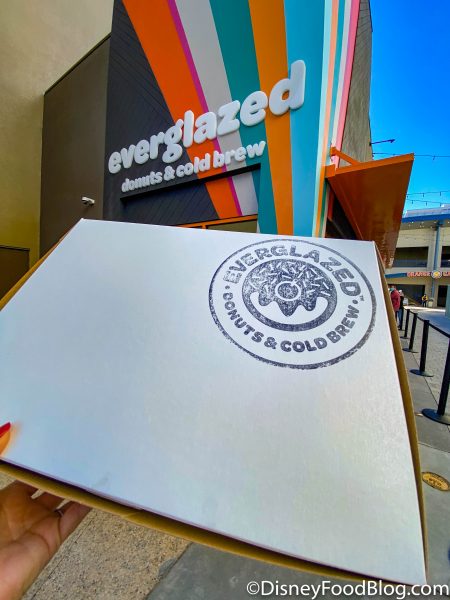 As always, stay tuned to DFB for all the latest news and reviews from Walt Disney World!

Disclosure: In nearly all circumstances, Disney Food Blog writers and photographers pay full price for their own travel, hotel, food, beverage, and event tickets. We do this because it’s important to us as journalists to ensure not only that we give you unbiased opinions, but also that you can trust us to do so since we’re paying our own way. On rare occasions, when we are invited by a company to attend a preview as media, and when we choose to accept that invitation, we will always make you, our readers, aware of that situation. Today, we were invited by Disney World to attend their media preview of Everglazed  Donuts & Cold Brew. Note that when we attend events as media we are 1) Not required to review that event/food on any of our channels, and 2) Not required to review that event/food favorably. You can always count on DFB to give you a 100% unbiased and honest review of any event that we attend, food that we eat, or beverage that we drink. You can see more in our Disclosure Policy. Thank you for reading. — AJ

Will you be trying out Everglazed on your next Disney Springs trip? Tell us in the comments!