Welcome back, DFB friends! We’re here with another What’s New at the EPCOT Resorts! 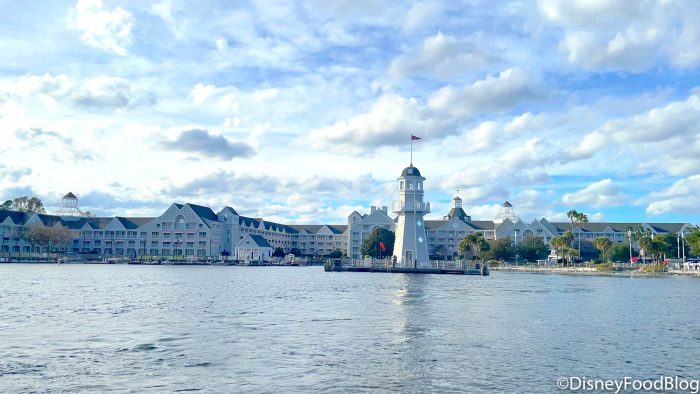 And, we’ve got plenty of new food and resort updates to share with you. So, what are you waiting for? Let’s jump right on in!

Over at the Boardwalk Bakery, we spotted a healthier option on the menu and decided to give it a try! The Tomato Mozerella Salad comes in a handy to-go cup and is made with yellow and red grape tomatoes and fresh mozzarella, topped with a side of basil olive oil dressing. 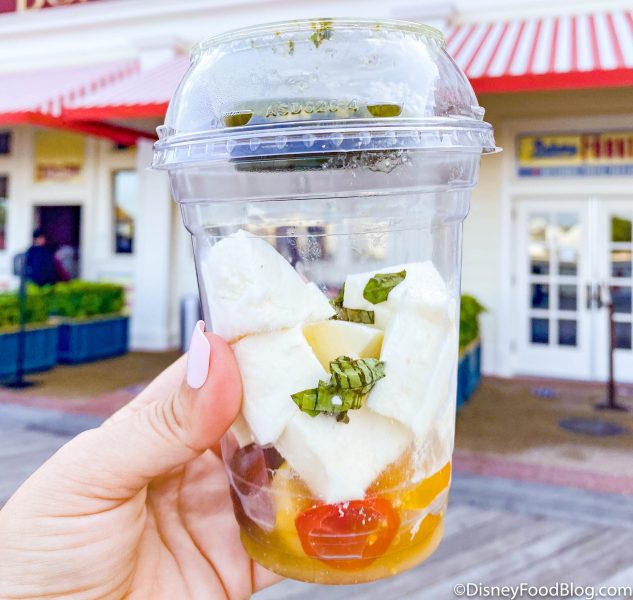 The coolest part of this salad is that the dressing comes in a separate cup so you can add as little or as much as you’d like and the tomato and mozzarella aren’t soggy from sitting in the dressing! 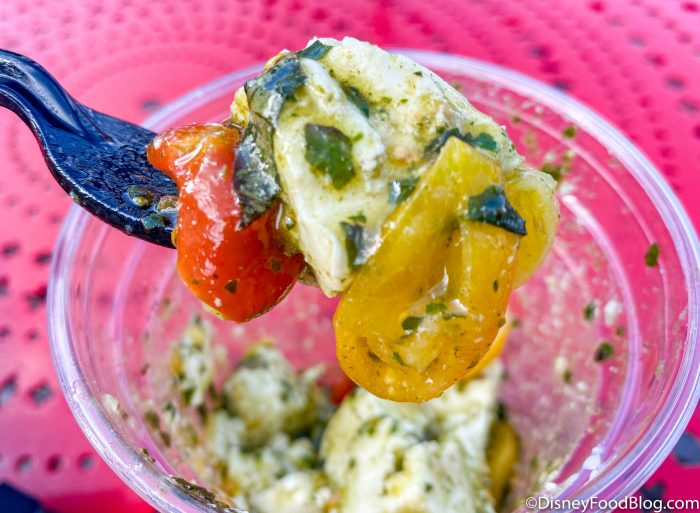 If you’re in the mood for a healthier snack during your trip to Disney World, this is a great option for $4.49.

Read our FULL REVIEW of the Tomato Mozzarella Salad HERE!

Even though we got something healthy doesn’t mean we weren’t eyeing the treats. The Coconut Macaroons were still sporting their Valentine’s Day look with a splash of pink and red! 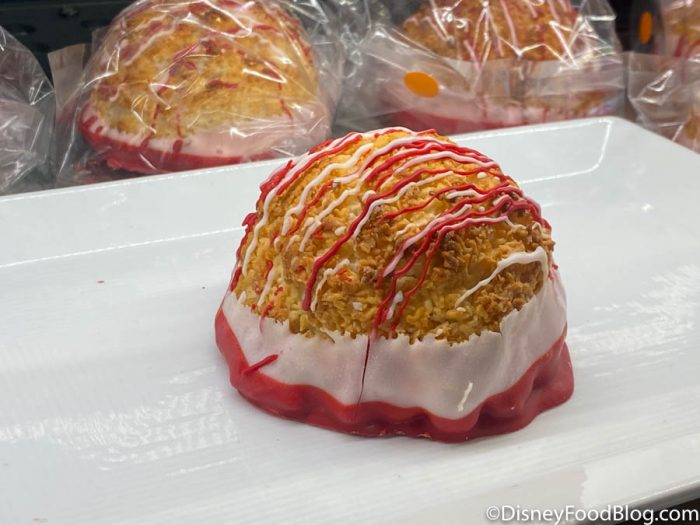 You can get this GIANT macaroon and bask in all the coconut glory for $4.29.

We’ve given this macaroon a try before!

Over at Big River Grille & Brewing Works, we noticed that there were tables set up outside. 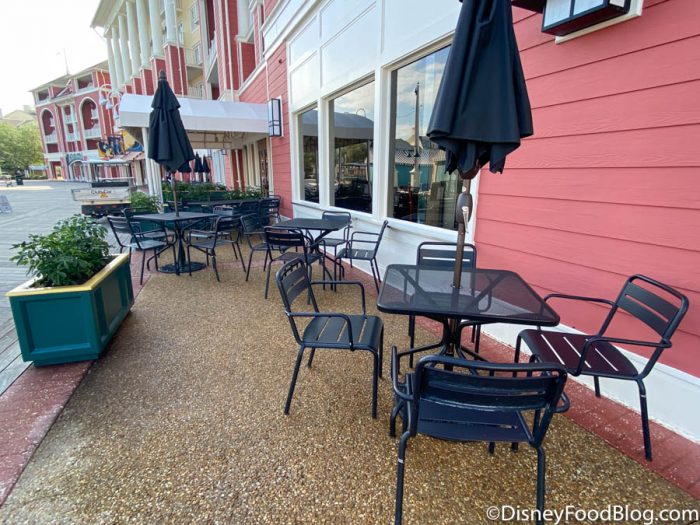 The restaurant is still closed and has not announced a reopening date but hopefully, this means we’re one step closer!

We’ve been loving The Soul of Jazz: An American Adventure exhibit in EPCOT and another Soul-inspired display has made its way to the Screen Door General Store — but this display is full of things you can buy! You’ll find some of the Soul plushes, t-shirts, and toys that we’ve spotted at other locations around Walt Disney World. 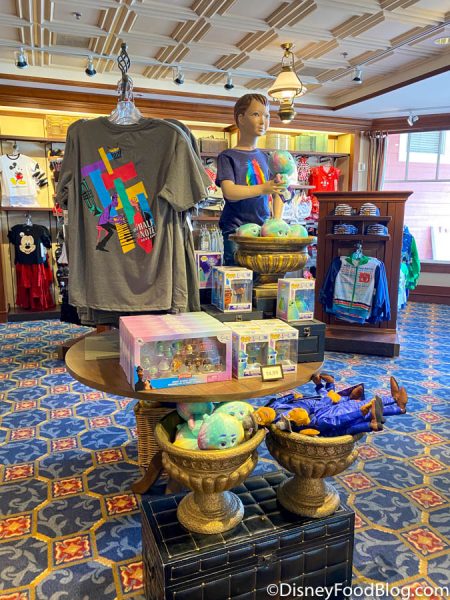 We were hopeful that the display meant that there was some new Soul merchandise making its way into stores, but sadly there was nothing we hadn’t seen before here.

Read MORE About The Soul of Jazz: An American Adventure Exhibit in EPCOT!

Over at the Luna Pool, we spotted a new Cast Member costumes at the Leaping Horse Libations Pool Bar. The new look features a blue polo that has striped sleeves and a few darker blue details. 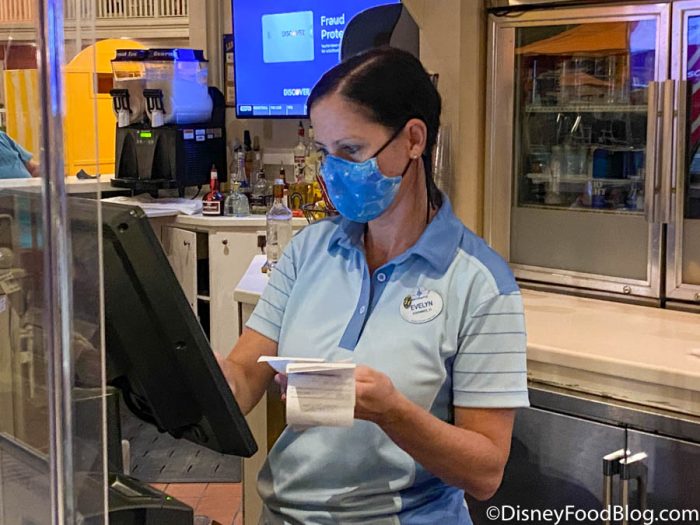 We’ve seen quite a few other resort Cast Members get an updated look recently so we’re just adding this one to the ever-growing list! This shirt looked like the reddish-orange ones we spotted at the bars at the Polynesian Resort!

Last year, the water slide at the Luna Park Pool got a less-creepy makeover and now the slide is completely open! 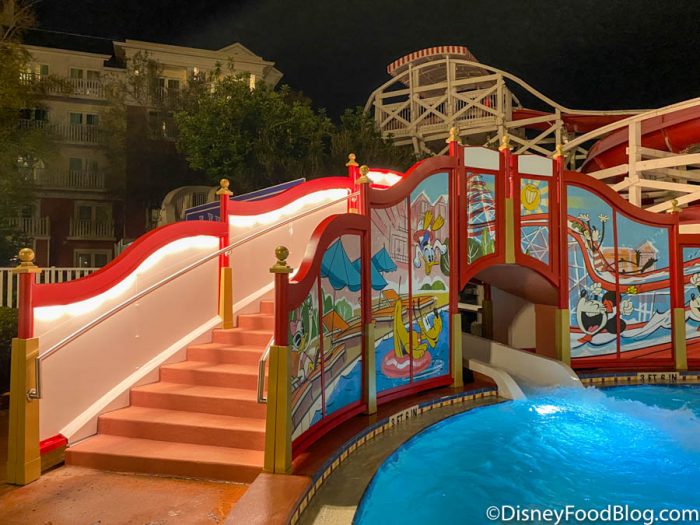 It lights up just like a carnival at night making it even MORE exciting to be checking out the water slide during your dedicated pool time! (No creepy light-up clown eyes in sight anymore!)

If you’re a die-hard fan of Disney’s Yacht Club Resort (or you would love a new Disney cup), we spotted a new Tervis at The Marketplace at Ale & Compass. The tumbler features Mickey and Minnie sailing on Crescent Lake spending the day relaxing. 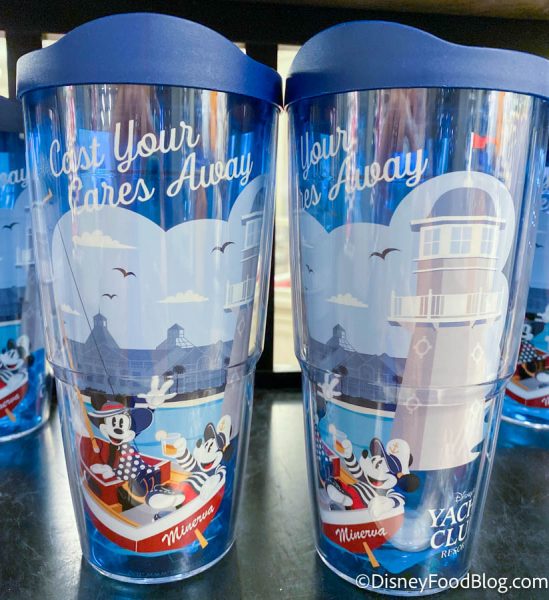 But, this tumbler is more than meets the eye! There are some really cool nods to Disney history in the design. Check out what the sailboat is named!

See if you can spot all the hidden details on the tumbler!

While we were shopping, we also spotted the Betsy Johnson Nautical Line! We’ve seen this collection before over at the Contemporary, but it has made its way over to the Yacht Club too! 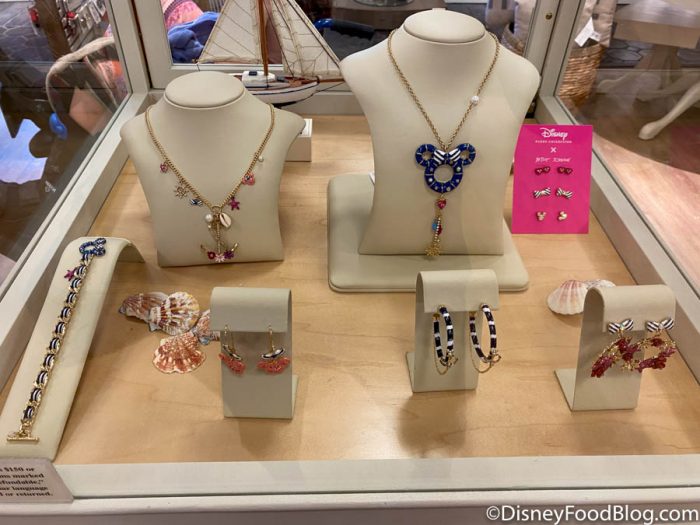 And, you can spot Disney’s latest shoe trend in the store — the Native shoes! These shoes come in tons of Disney designs and can make park-going comfy for kids and adults! 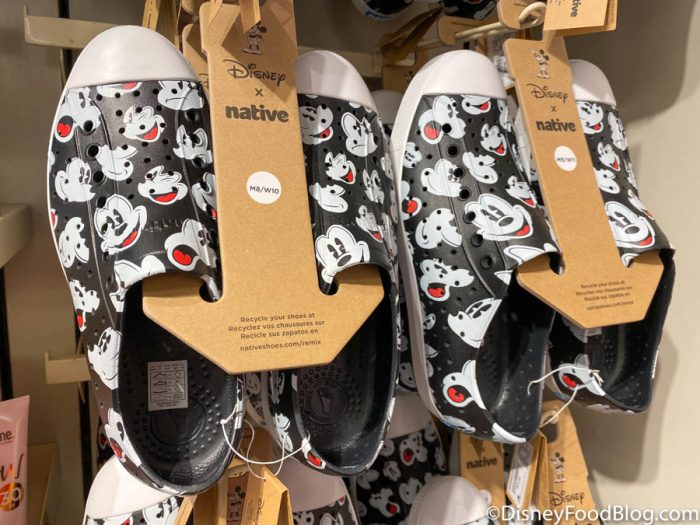 The shoes have nothing short of invaded Walt Disney World so you can snag a pair of these babies in A LOT of stores both in and out of the parks.

Here’s where you can find the Native Shoes in the Disney Parks!

The new Cast Member look has even made its way over to Hurricane Hanna’s Waterside Bar and Grill! 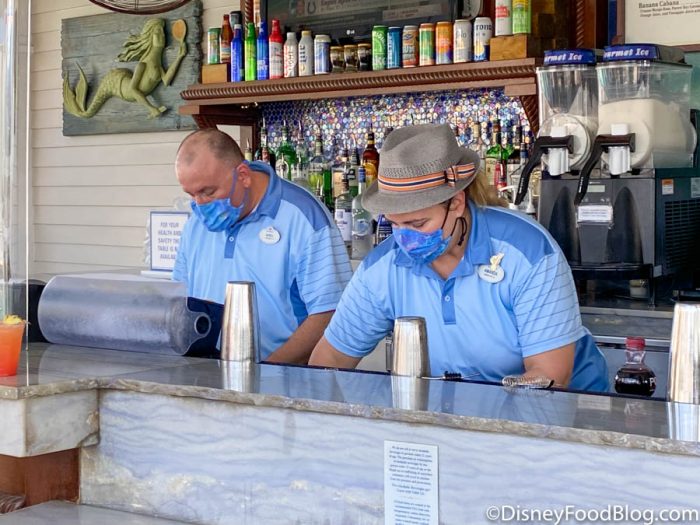 Did we miss the memo or something? Should WE be changing what we wear to the park? There are just so. many. new. costumes.

Seriously! We have an entire post with all the new Cast Member costumes!

Around the Yacht Club

There was still a lot of hustle and bustle around the resort while we were visiting. Lots of Cast Members were out setting up for a private event that was taking place later in the day. Could that be Disney Wedding bells we hear? We’re just speculating…or dreaming… . 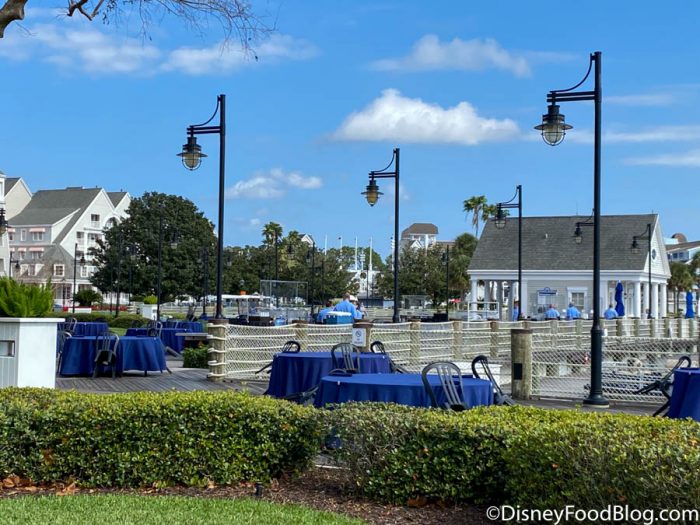 And, they were doing some trimming of the trees around the resort area. Gotta keep those trees well-groomed! 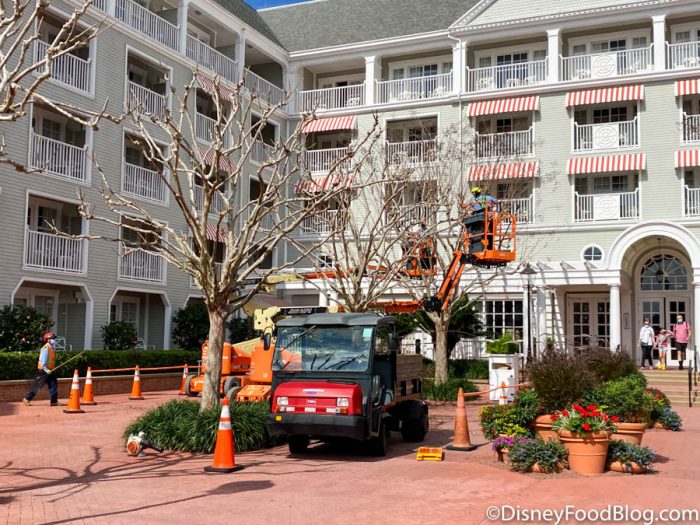 We love how nice everything feels at Disney World, but this looked…less than nice as you made your way around the Boardwalk.

Remember that sneaky hiding ice cream we mentioned? Perhaps the most suspicious thing we spotted on our visit to the EPCOT resorts, was over at Beaches and Cream. Disney added more trees and a black screen over the to-go window so absolutely NO ONE tries to place an order there. 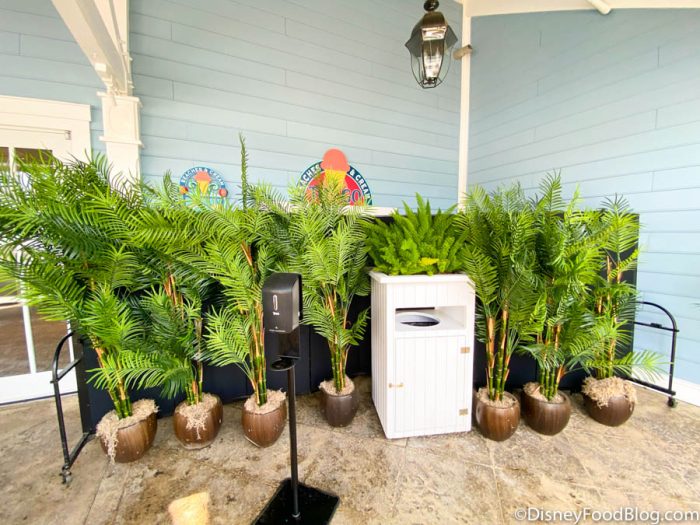 That’s one way to send a message, Disney!

Check out more about Beaches and Cream’s not-so-incognito to-go window!

Over at the Beach Club Villas, they’ve been working on adding an awning in a small area around the resort for a little while now. It looks like there’s progress being made though! 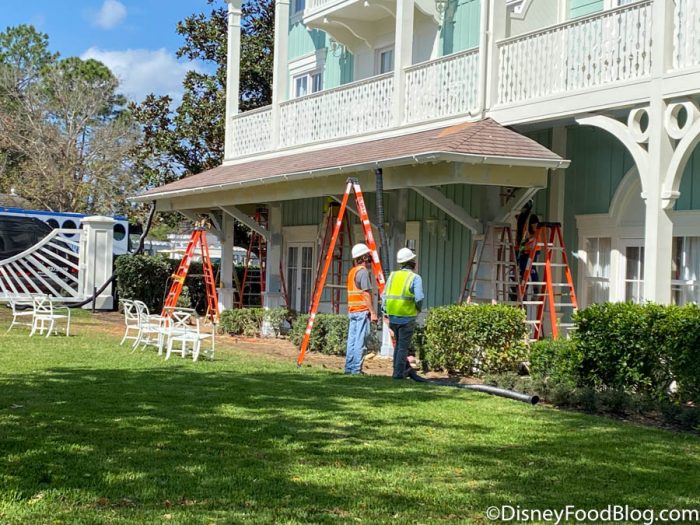 When we passed by, they were painting the area so hopefully that will be complete soon.

We weren’t able to relax in the sun at the Crescent Solarium while we were there because it was closed. The sign on the door said, “Please pardon our appearance while we refresh the Solarium for your future enjoyment.” 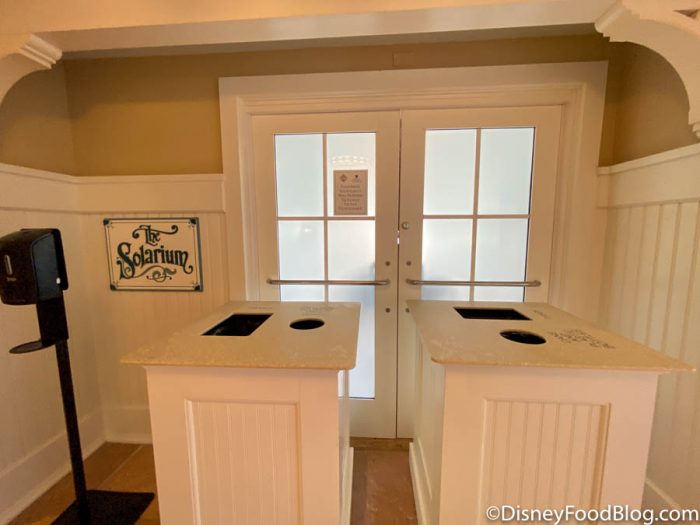 We’re not sure why it was closed, but when we listened closely it sounded like there was some cleaning going on behind the closed doors.

Take a look around the Crescent Solarium HERE!

And that’s all for our visit to the EPCOT Resorts! Stay tuned to DFB for more Disney news and updates!

Check out what’s new this week over at Disney’s Animal Kingdom!

Have you been to any of the EPCOT resorts recently? Let us know in the comments!

« 5 BIG Things You Need To Know If You’re Planning a Disney World Trip in 2022
With Spring Break Around the Corner, Disney World Extends Their Park Hours »