We are at EPCOT and doing ALL the EPCOT Flower and Garden Festival things! 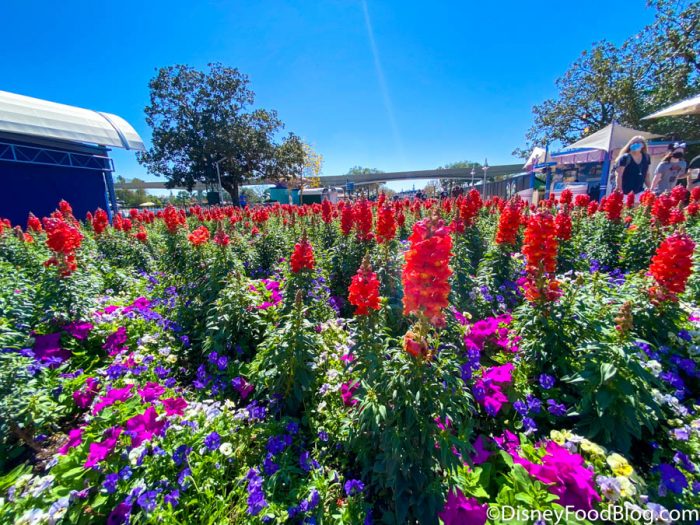 Except for THIS review, we’re not eating (GASP!). Instead, we’re having some festival-exclusive boozy drinks at Joffrey’s Coffee and Tea Carts. And this year, ALL of these drinks are NEW!

If you’re looking for all of the specialty drinks offered by Joffrey’s for this festival, you’re going to want to look for those bright teal-colored signs at each Joffrey’s location! 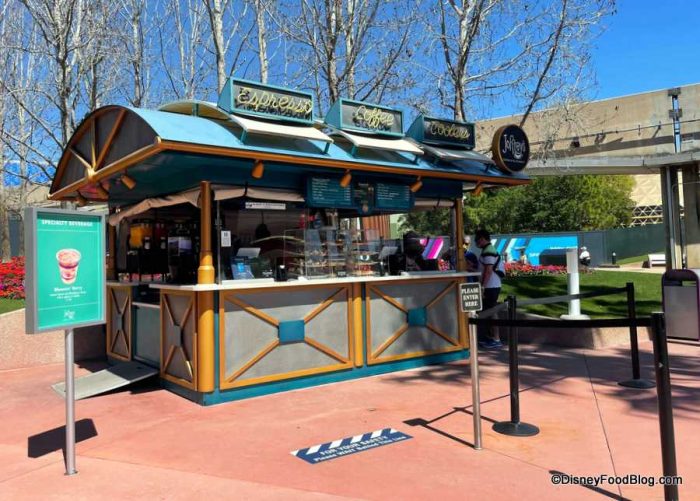 There’s one in World Showcase Plaza… 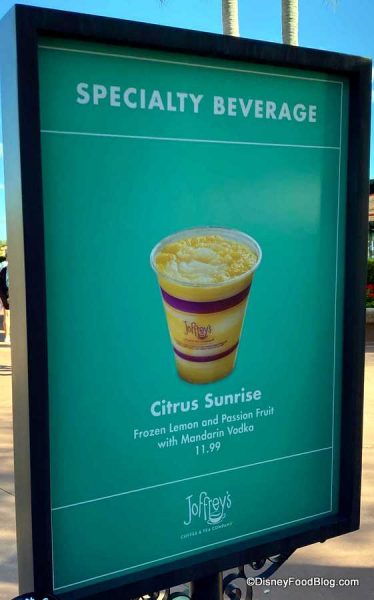 …as well as Future World East… 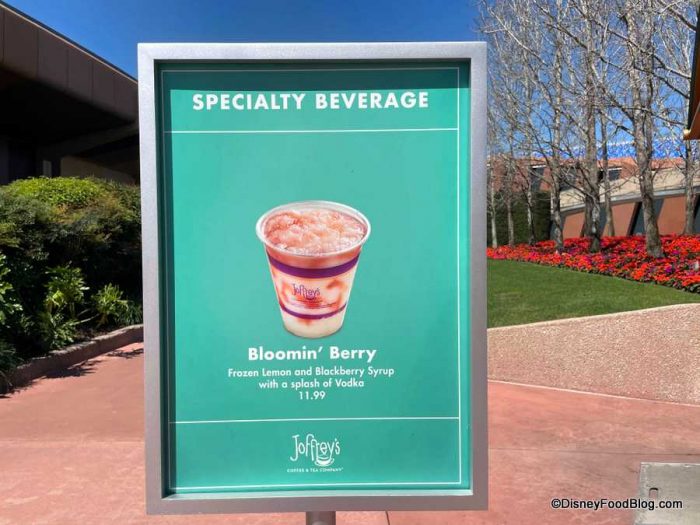 …and in World Showcase, look for menu offerings in The American Adventure… 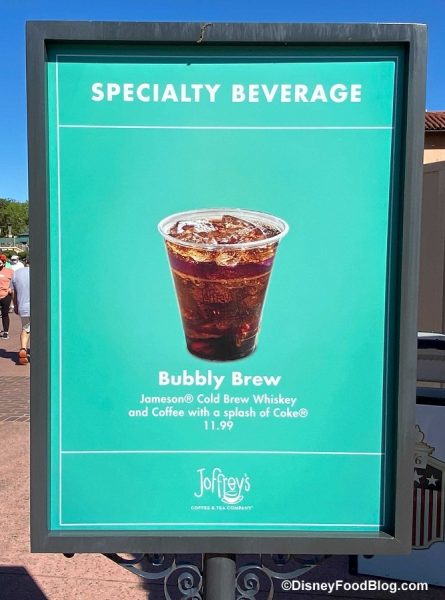 …and the Canada Pavilion! 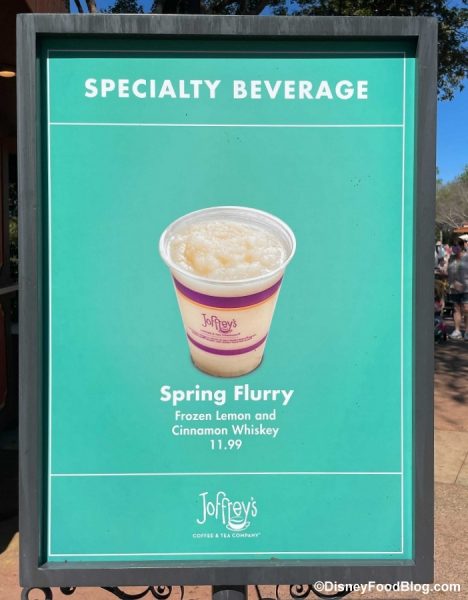 Few things excite us quite like new festival menu items, so off we went to try them all!

So let’s dive in, starting with the cart over at Future World East (right by Mouse Gear!), which is serving the Bloomin’ Berry, which is Frozen Lemon and Blackberry Syrup with a splash of Vodka. Um…yes, please! 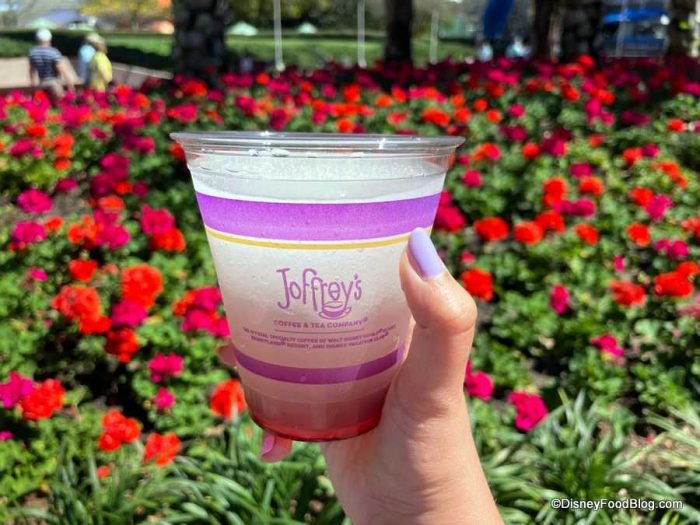 The fruity, lemon, and blackberry components work so well with each other in this drink! The lemon in particular offered a nice, tangy sweetness.

The vodka also added a nice kick. We were grateful that they went with regular, straight vodka as opposed to a flavored variety, because otherwise it would have been too much. Instead, we were left with a crisp, refreshing, and light libation! It costs $11.99. 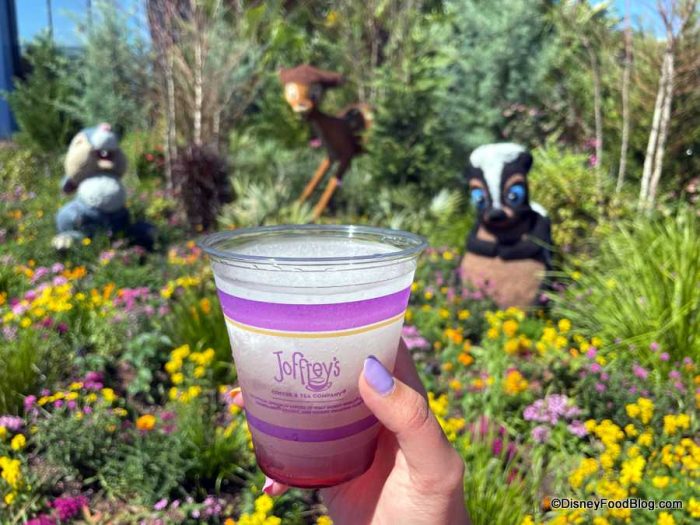 Now it’s on to the Joffrey’s at Showcase Plaza, where we’re going sip on a Citrus Sunrise: This is made with Frozen Lemon and Passion Fruit with Mandarin Vodka. Seriously, you had us at vodka…again. 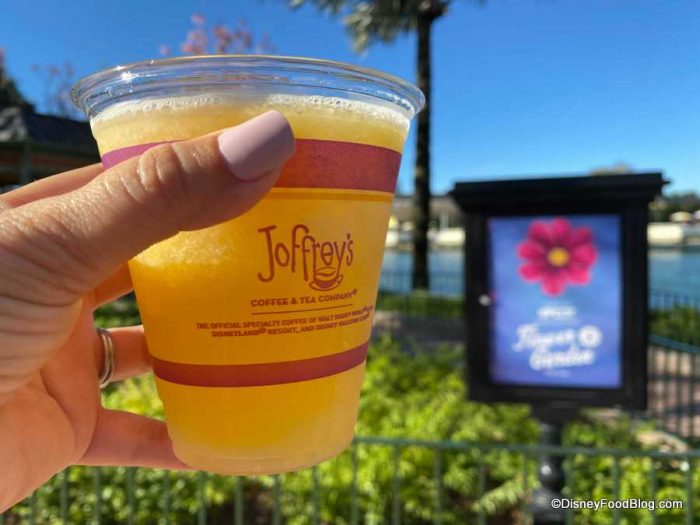 This was a delicious drink! It was very refreshing and citrusy. The vodka was strong, but still tasty! This was a super fun drink and we would definitely order it again! It also costs $11.99. 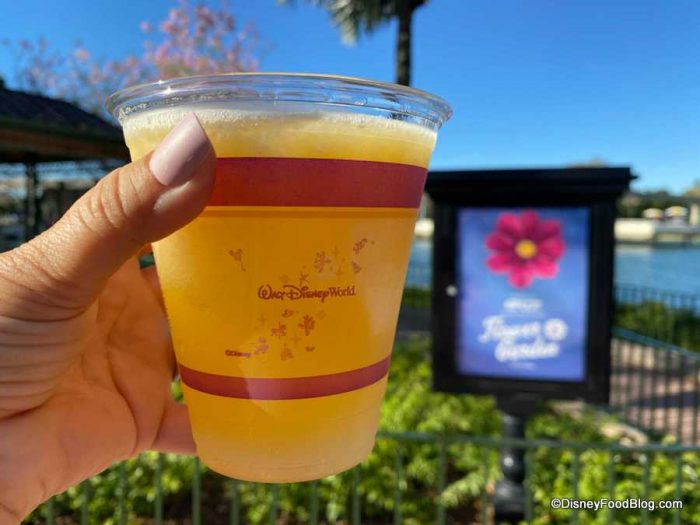 You know what’s fun? When your caffeine comes with booze, and that’s exactly what the drink over at American Adventure is all about. It’s called a Bubbly Brew and is made with Jameson Cold Brew Whiskey and Coffee with a splash of Coke. But how much “WOO” does this drink actually include? 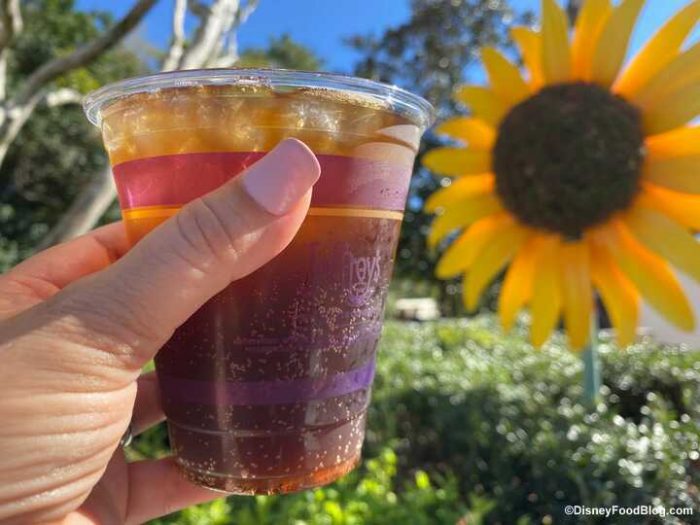 Our reporter that tried this drink isn’t the biggest coffee fan, but they DO love Jameson! This drink tastes exactly like an iced coffee with the tiniest of kicks! If you enjoy cold brews with whiskey, this is right up your alley.

We didn’t find the drink to be very strong however, so if you want your dollars to stretch far at the Festival, you may be better off with a nonalcoholic coffee drink in this situation. Like the other specialty drinks from Joffrey’s, this one costs $11.99. 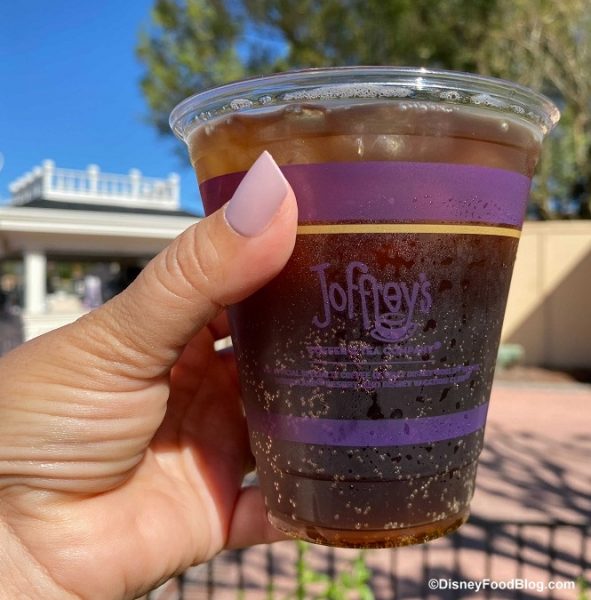 Last but not least, over in Canada, we sipped on the Spring Flurry, which is Frozen Lemon and Cinnamon Whiskey. 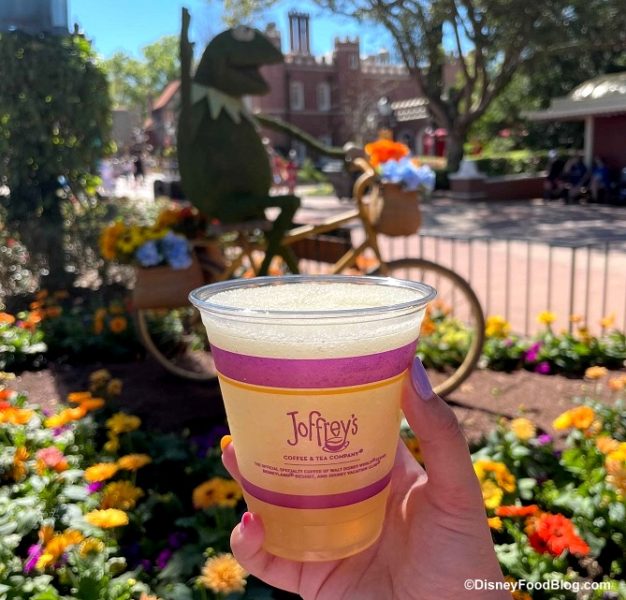 Now, the reporter that tried this drink is almost the opposite of the one that tried the Bubbly Brew in that they AREN’T huge whiskey fans! However, they were really into the cinnamon whiskey flavor in this drink.

They didn’t think the lemonade slush and cinnamon combo would work, but it totally does! It reminded them of a crisp and flavorful fall apple treat! If you aren’t into cinnamon, you may want to skip this drink and grab one of the other Joffrey items instead. It costs, you guessed it, $11.99.

Joffrey’s always seems to have something up their sleeves with specialty drinks, and this year’s Flower & Garden Festival is no exception! The four drinks offer a wide variety of flavors and you should be able to find one that suits your palette! 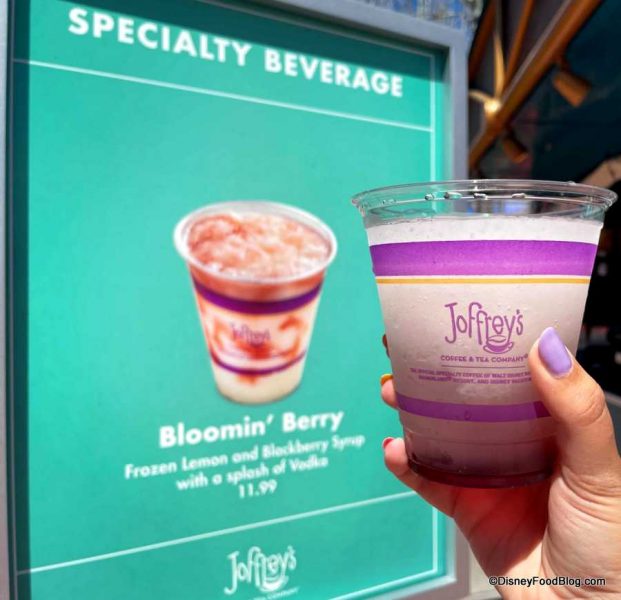 Oh, get this — for just $2 more per drink, you can get an extra shot of alcohol in your drink. So cheers to that! And stay tuned because we’re just getting started with the food and drink reviews at the EPCOT Flower & Garden Festival. After all, the festival is just getting started too — it runs through July 5th! 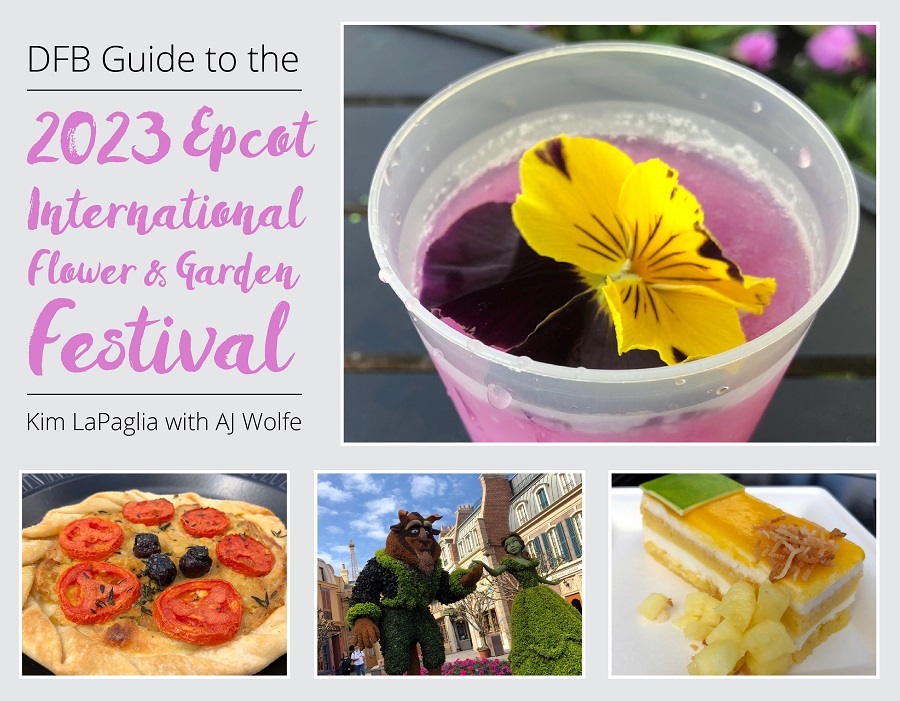 Let us know if you try any of these drinks — we’d love to hear what you thought in the comments!

« Review: EPCOT, Please Put a Runny Egg on Everything From Now On
What Happens When EPCOT Mixes Potato, Shrimp, and…Strawberry? »