We really love Disney food. Hey, we didn’t call ourselves the Disney Food Blog for nothin’! 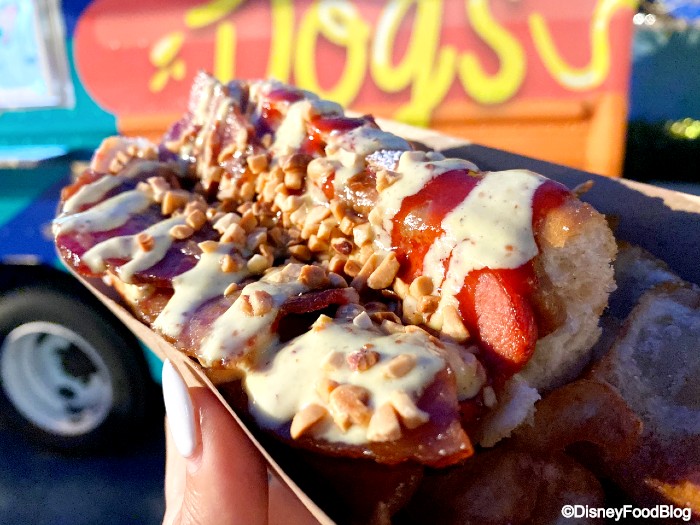 Though a LOT of Disney food is a big hit, sometimes Disney misses and they can miss BIG. Today, we’re thinking back on the yuckiest things we’ve eaten in Disney World so far this year — and hoping they never grace our plates again.

The first thing we thought of when we thought of gross Disney food was the King Dog from Hot Diggity Dog Food Truck. This item was available for a VERY limited time (thank goodness) on the secret menu. 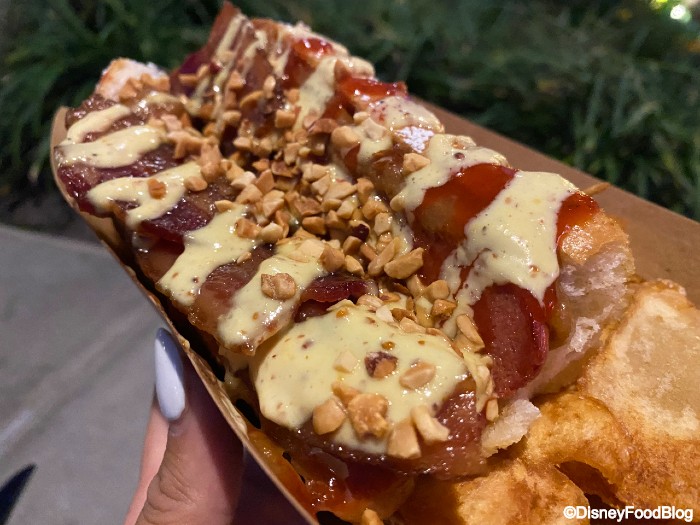 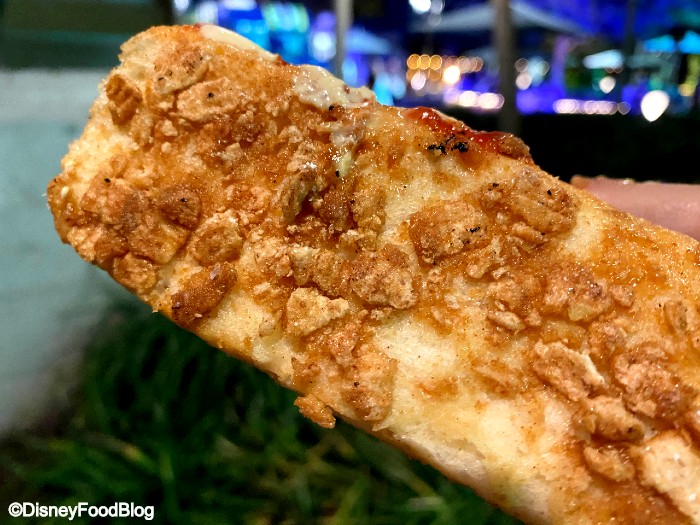 There was a LOT going on with this eat (Or should we say treat? We don’t know.). The spicy peanut butter sauce was the strongest flavor and when you got to the hot dog you were reminded that it was pretty much a frank covered in weird breakfast toppings. Yeah…not our favorite snack ever.

Click here for our full review of the King Dog!

This next one isn’t really something we ate; it’s something we drank! YeSake kiosk in Disney Springs introduced an inventive drink as their March limited-time option to help celebrate St. Patrick’s Day. Well, spoiler alert, it was not the best. 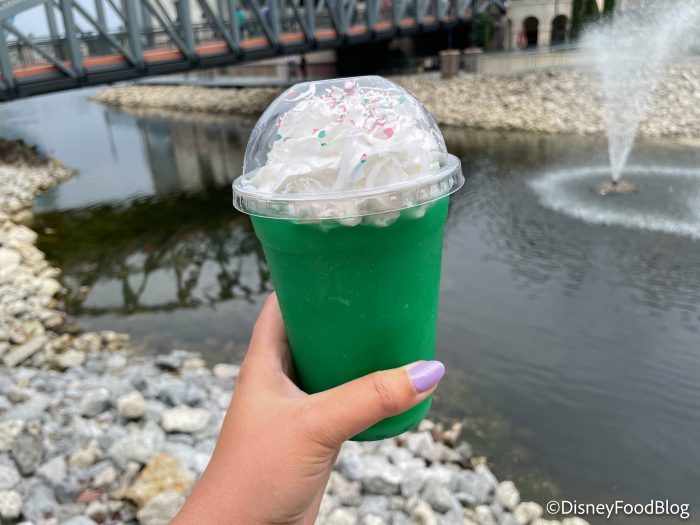 The Peppermint Patti was a Green Lemonade topped with Whipped Cream and pieces of Peppermint Bark. We have so many questions. Why is the lemonade green? Who puts whipped cream on lemonade? And since when do peppermint and lemon flavors go together!? 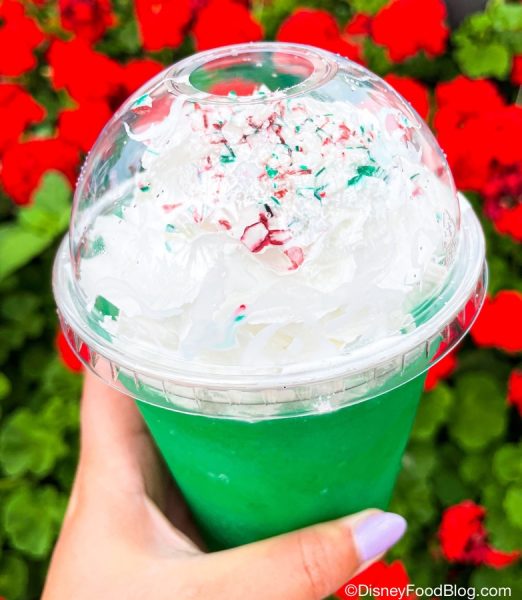 The answer to that last one? Since never. The Peppermint Patti had a SUPER sweet lemonade base and the peppermint flavor with the lemonade was pretty jarring. It kinda tasted like drinking lemonade immediately after brushing your teeth. Blech.

Want to see more of the Peppermint Patti? Click here!

This last one you can actually still try in Disney’s Animal Kingdom — but not for long! The Sea Turtle Cupcake was introduced at Restaurantosaurus as a part of the Earth Day celebrations earlier this month. It’s positively ADORABLE, but the taste is just plain weird. 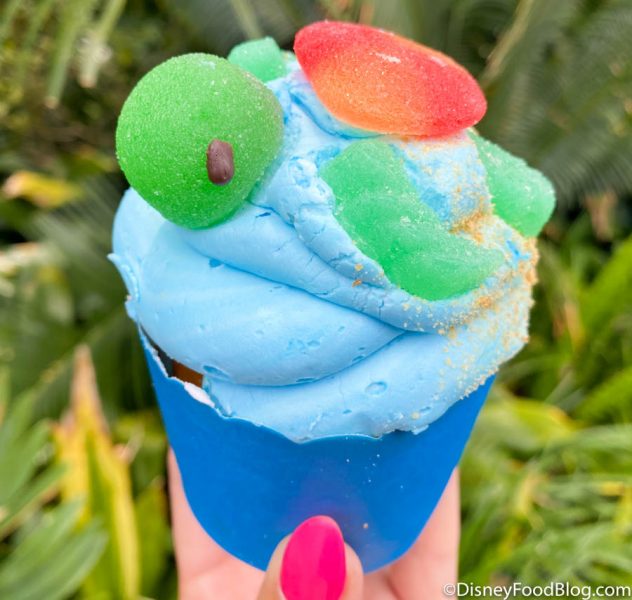 This treat is based on the moment a baby sea turtle hatches and heads into the sea. It’s a Graham Cracker Cupcake with Key Lime Pie Filling and Guava Gelée with Vanilla Buttercream, topped with a Fruit Snack Sea Turtle. 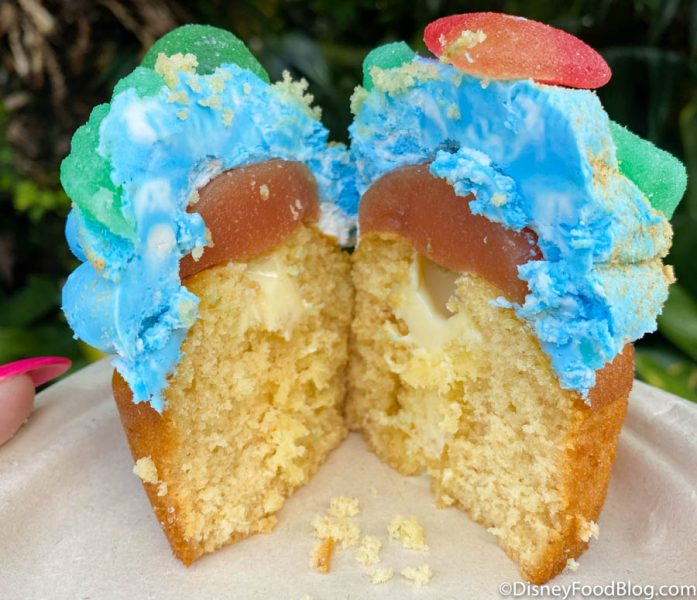 Let’s take a peek inside!

You certainly can’t say this treat isn’t cute, but boy does it taste weird. The gummies are spearmint and peach so the combo of mint with lime, vanilla, and guava was just plain weird. That just proves you can’t judge a cupcake by its decorations!

To learn more about the Sea Turtle Cupcake, click here!

See? Disney certainly has had a few misses so far this year. As always, we’ll be keeping an eye out for new eats in Disney World and trying them ALL. Maybe we’ll find a new favorite…we just might have to go through some not-so-favorites in the meantime.

Did you try any of these yucky snacks? Tell us in the comments!

« PHOTOS & VIDEO: First Look at Disney’s Life-Size WALKING Baby Groot!!
Here’s How to Get the Latest Disney x kate spade Collection Without Going to the Parks! »