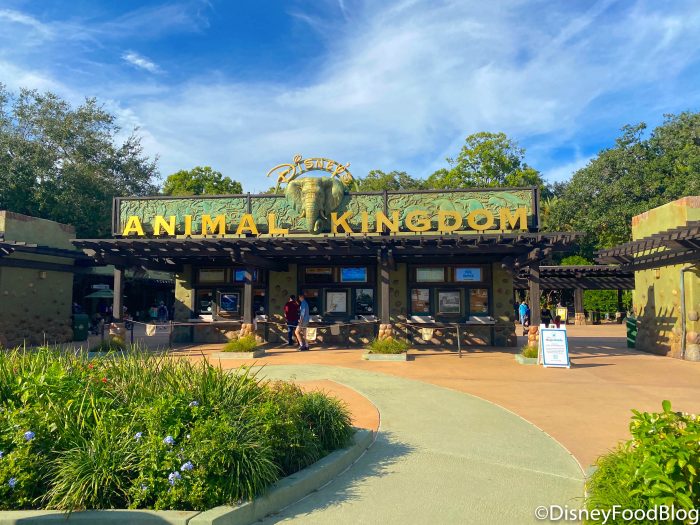 As we were scoping the parks for holiday treats, we spotted the Celebration of Autumn Cupcake lookin’ pretty on the shelves of Flame Tree Barbecue. While the cupcake is there for Thanksgiving, it had plenty of Fall flavors with a pumpkin cake, toffee cheesecake filling, cinnamon-flavored frosting, Tree of Life decal, candy pumpkins, and autumn leaf sprinkles. And, yes, the cupcake is JUST as huge as it looks! 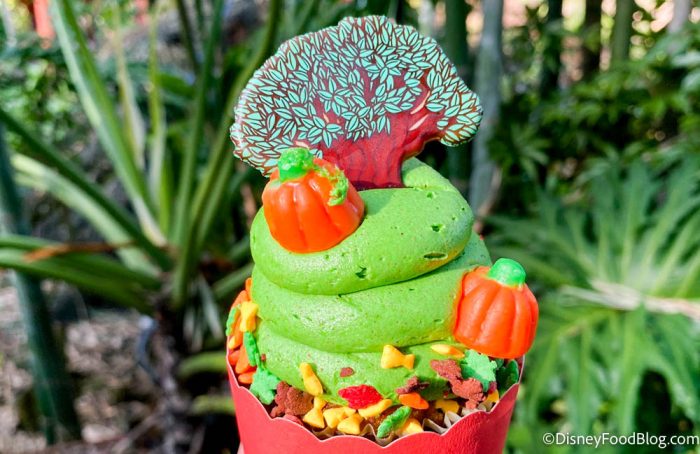 The New Celebration of Autumn Cupcake

This was definitely one of the best fall cupcakes we’ve EVER had in Disney World. The spices really tied the treat together, making it something special and unique! 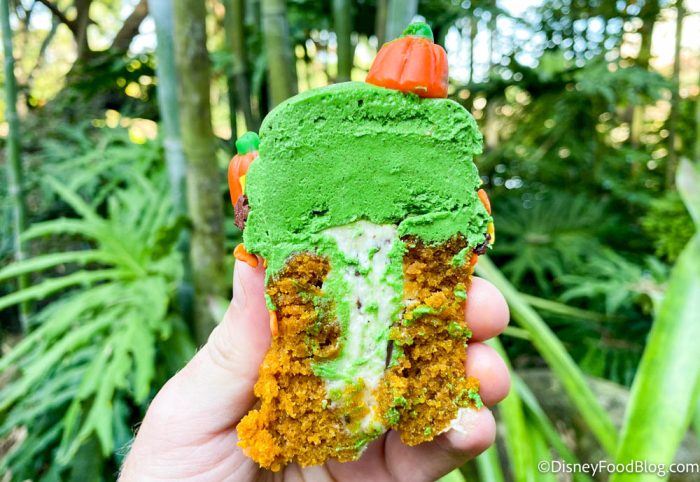 Read our full review of the Celebration of Autumn Cupcake here! 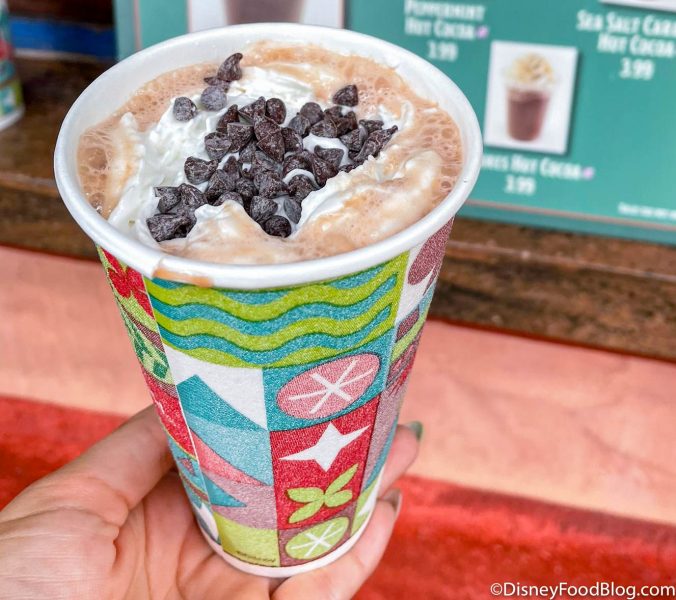 …and the S’Mores Hot Cocoa with the flavors of s’mores with whipped cream and graham cracker crumbs on top. 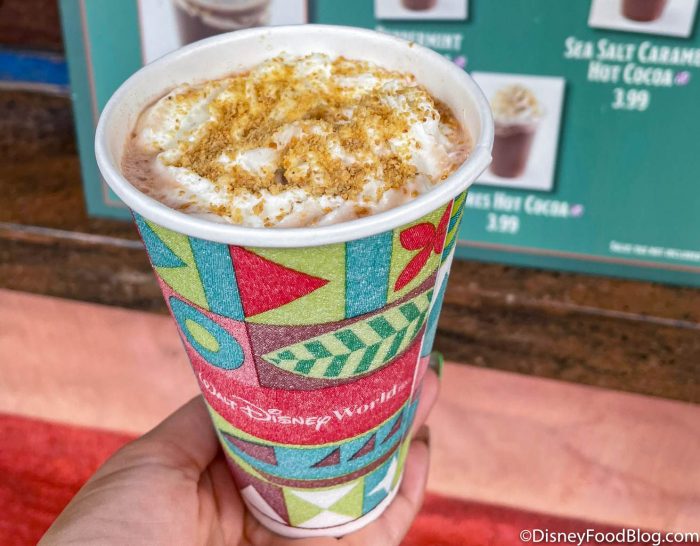 Time for Some S’Mores Hot Cocoa!

But, you’ll want to drink that whipped cream fast, because it melts into the drinks quickly! You can try both the Peppermint and S’mores Hot Chocolates for $3.99 each.

Check out our thoughts on the returning holiday drinks in Animal Kingdom here!

You do a LOT of walking whenever you’re in Disney World! And, if you’re trying to look stylish while you get your steps in, you can use the new-to-us Donald Duck Apple Watch Band for $34.99. 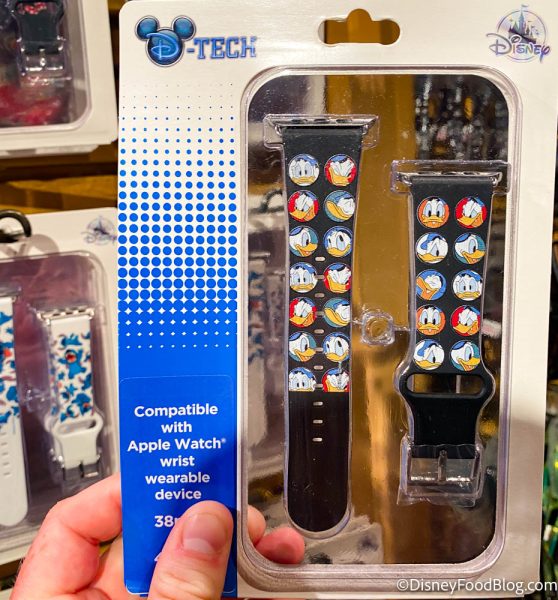 The NEW Ahsoka Tano Ears were fully stocked for $39.99. All you need is a Star Wars shirt and some accessories for your look to be complete! 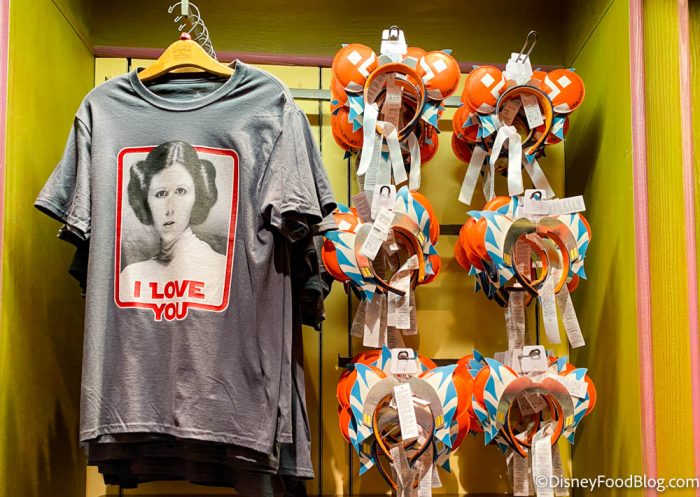 After that epic finale of Marvel’s What If…?, we can’t wait to see what’s in store for the multiverse! In the meantime, though, you can take home the new What If…? Pin for $15.99 that shows the Guardians of the Multiverse. 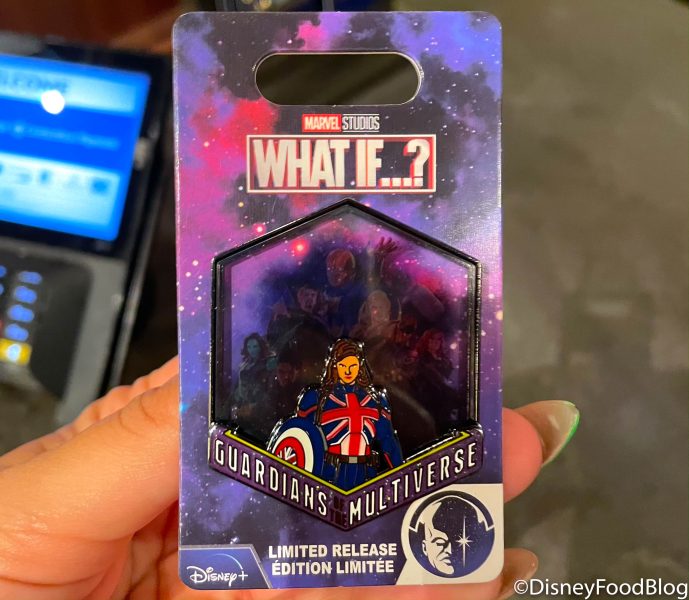 The back is see-through with the characters, as Captain Britain stands front and center, ready for battle! 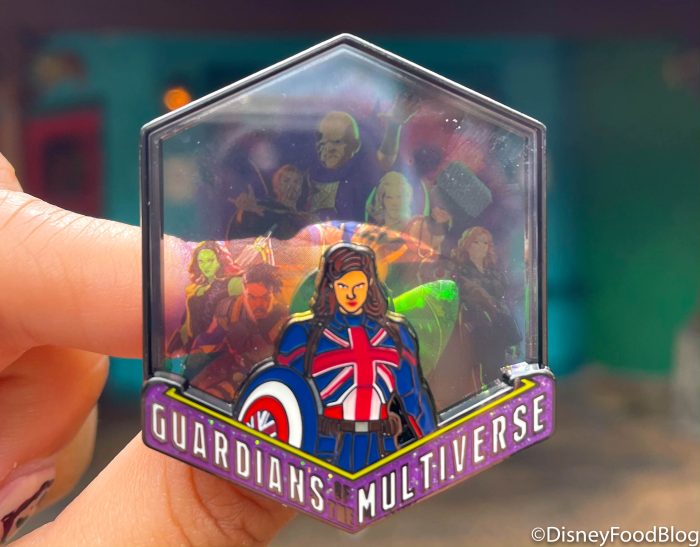 Along with the What If…? Pin, you can also find the Jack Skellington Halloween Pin that we recently spotted at the Dark Room in Disney’s Hollywood Studios. 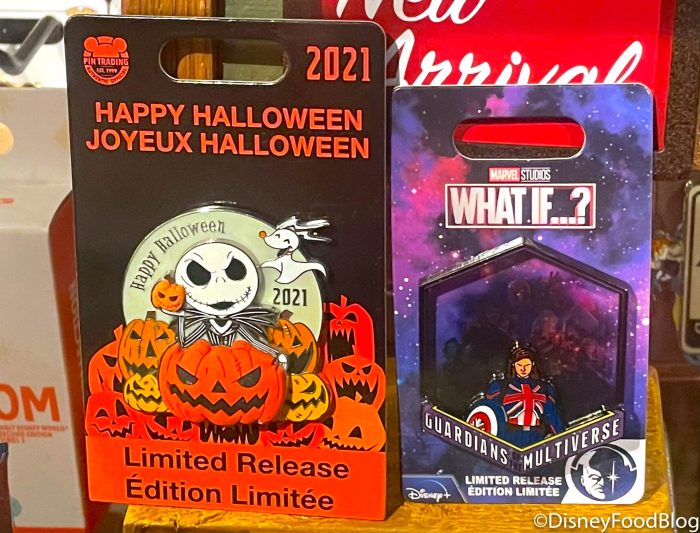 Sometimes rides experience a few bumps in the road at times. This week, we were in Disney’s Animal Kingdom when both Expedition Everest… 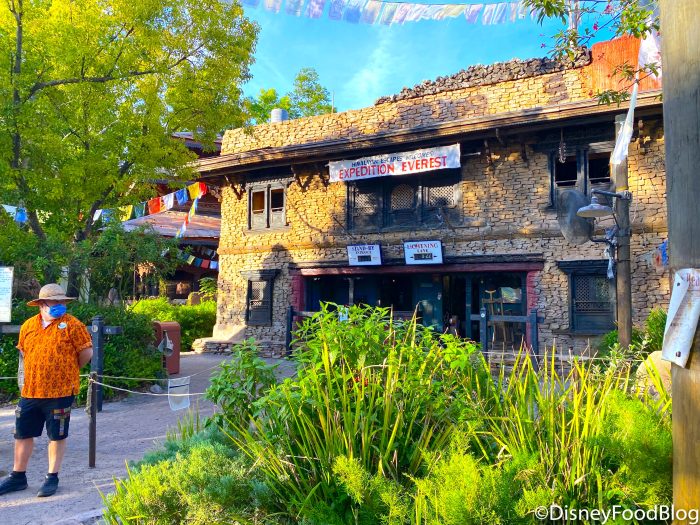 …and Kali River Rapids experienced some difficulties. Although they were closed for portions of the day, they eventually reopened for guests to enjoy! 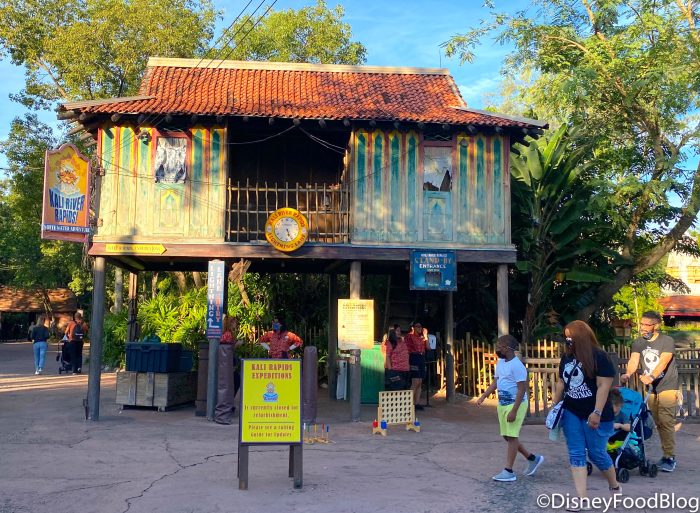 Now that spooky season has officially ended, Disney World has been transforming its parks for Christmas time! And, Disney’s Animal Kingdom is a part of the festivities officially now that themed holiday decorations have started to arrive! 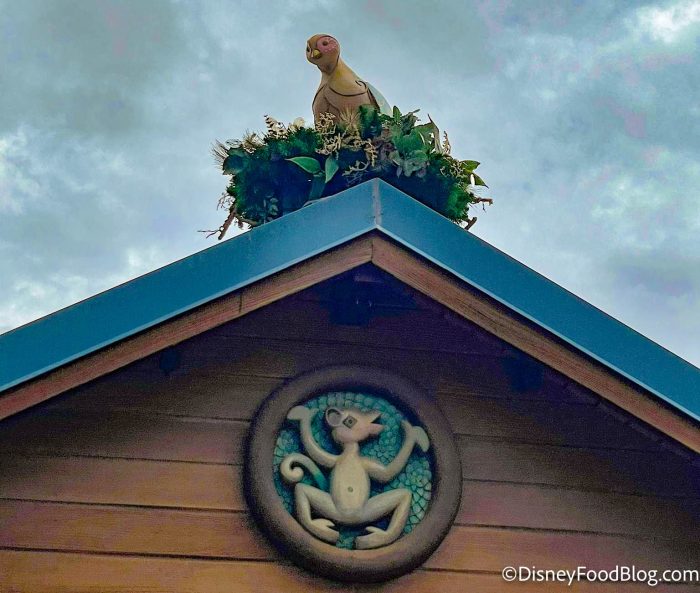 How pretty are these birds?

Many of the decorations are similar to those we’ve seen in the past, like the beautiful birds that sit in holly and ivy on the tops of buildings and lampposts. 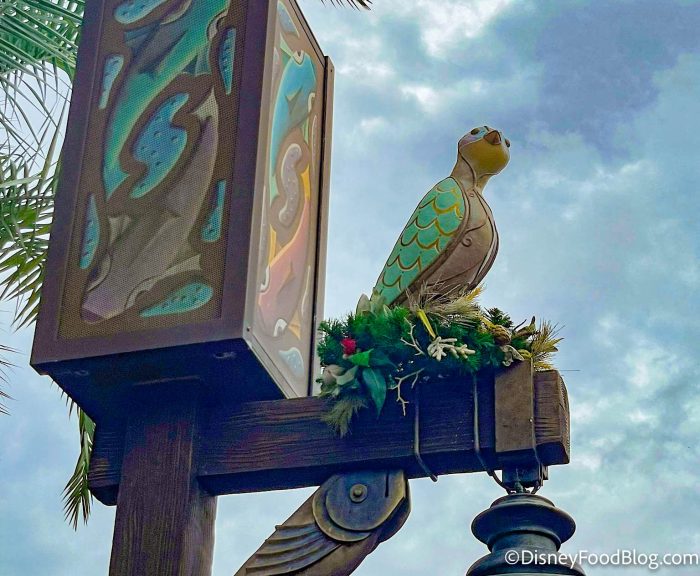 The animal lanterns (one of our favorite parts of the season) are back too with inspiration from the Merry Menagerie puppets that make their way around Animal Kingdom for Christmas. 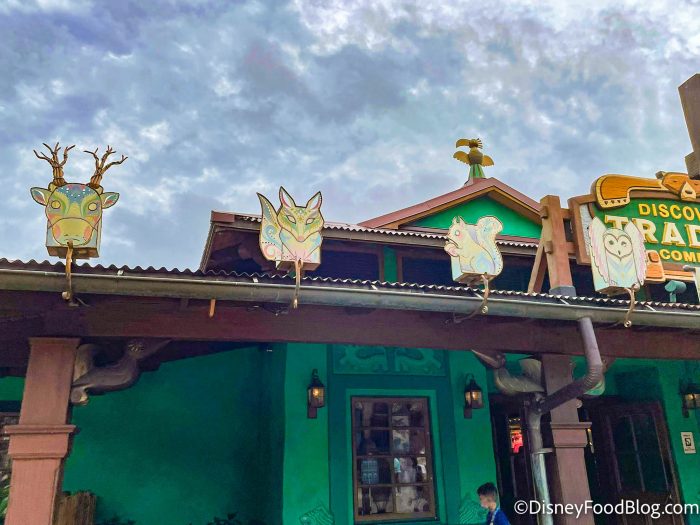 The lanterns are back!

If you return at night to Disney’s Animal Kingdom, you’ll even be able to see the lanterns light up to ring in the holidays! 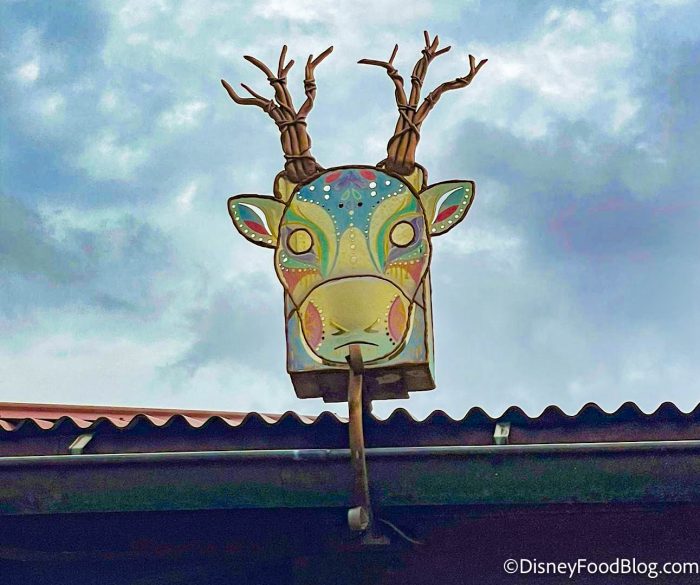 These lanterns are one of our favorite additions!

Throughout the week, we saw even more themed decorations make their way into Discovery Island, like the beautiful birds relaxing in the foliage. 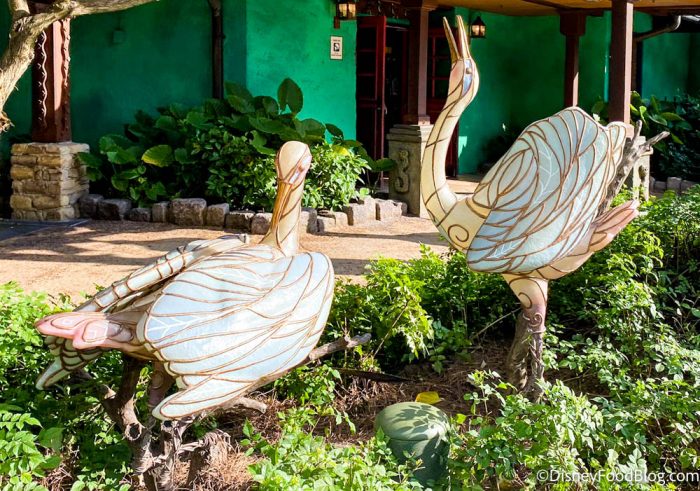 Many of the statues have the appearance of movement to them, making them that much more of a must-see this Christmas in Disney World. 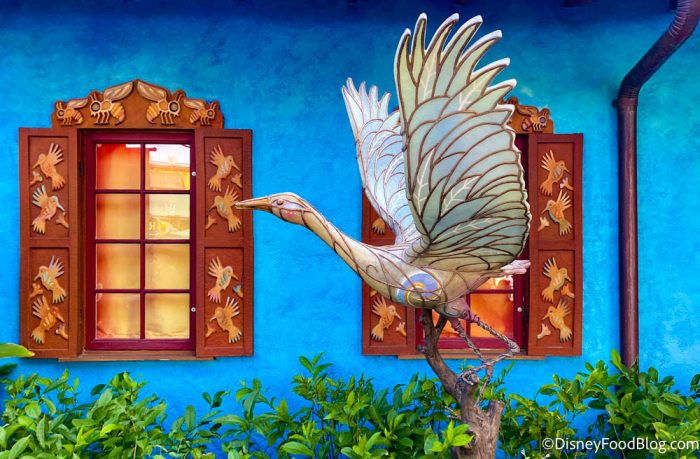 Christmas decorations were also going up inside the stores in the Animal Kingdom as the Discovery Trading Company was decked out in holiday decor. The area was fashioned with Christmas trees… 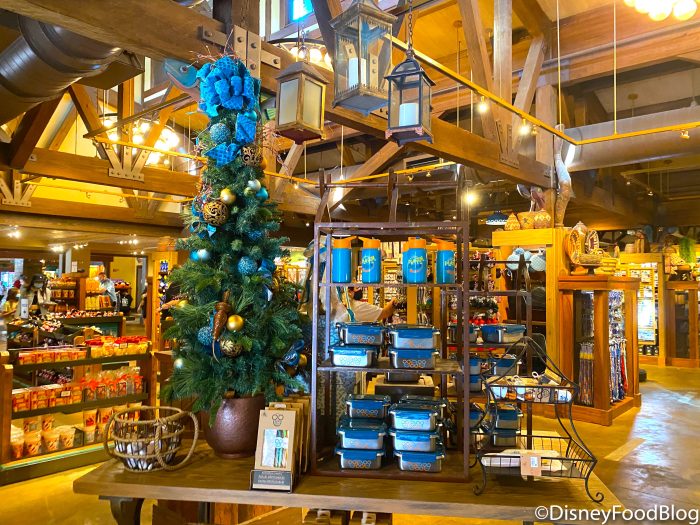 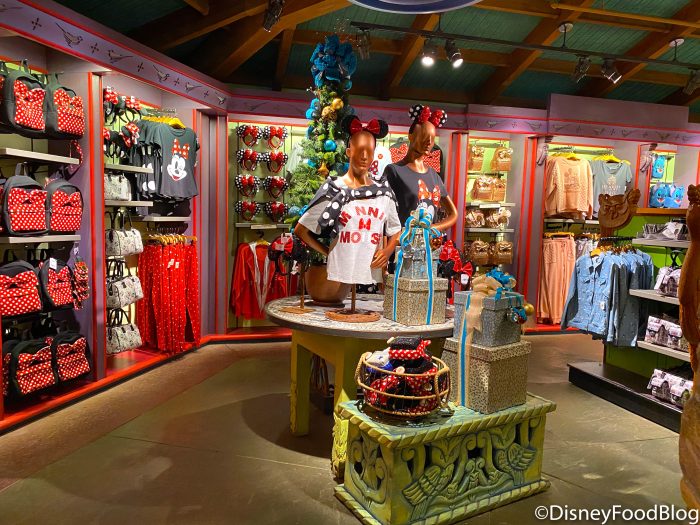 …and even wreaths (with a few adorable Cast Members willing to pose beside them)! 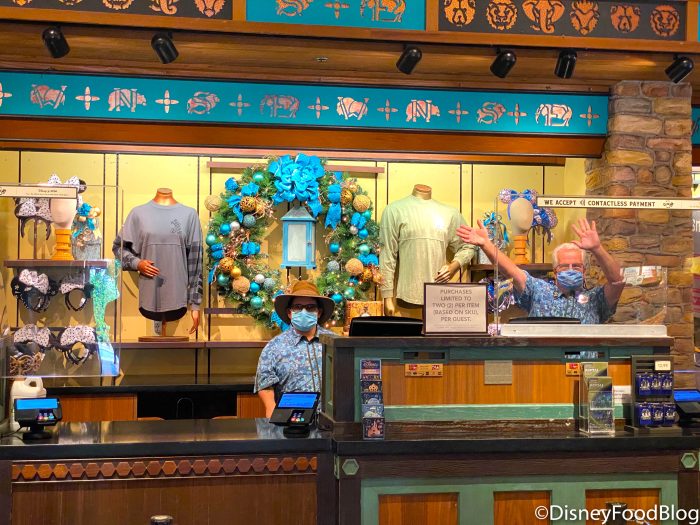 Of course, we’ll keep you updated on more decorations that come to the parks soon too!

Take a look at all the holiday decorations in Animal Kingdom here!

Well, that’s all for this What’s New at Disney’s Animal Kingdom! We’ll catch you next time for more updates. And, if you have any questions about your upcoming Disney vacation, let us know so we can help you find the answers! Stay tuned with DFB for the latest Disney entertainment and news!

What are you looking forward to seeing the most in Animal Kingdom? Let us know in the comments below!

« Is It Cheaper to Buy a Disney Shirt For Yourself or a Toy?!
What’s New in EPCOT: Sea Urchins Celebrate Halloween as Holiday Merchandise Starts to Arrive »