Flame Tree Barbecue is where guests with a beastly hunger can dine in a lush outdoor paradise overlooking Discovery River. 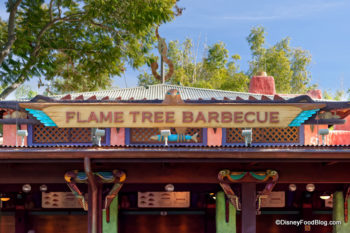 Located near the Discovery Island bridge to DinoLand, it boasts some absolutely gorgeous views. All seating is outdoors, but colorful pavilions provide shade and cover from the sun or inclement weather.