We’re on the search for seasonal snacks at Disney’s Animal Kingdom! And it’s not too hard to find them… 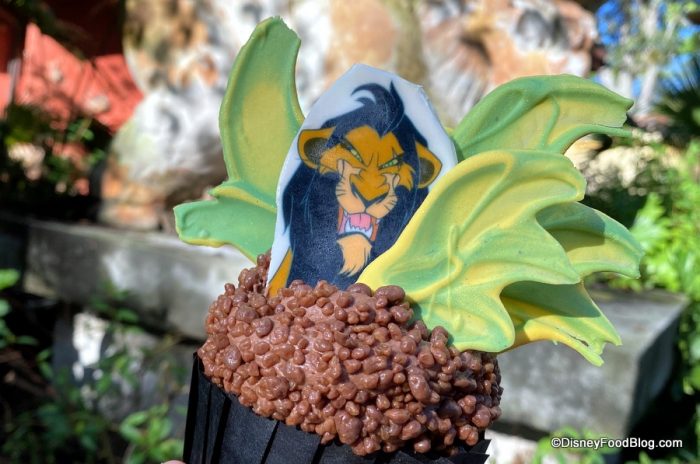 After all, fall and Halloween treats have arrived at both Animal Kingdom and Disney’s Hollywood Studios as of TODAY, and we’re still finding even more goodies at Magic Kingdom! While our first Animal Kingdom find was the Scar Cupcake (oh, yeah… you’ll want to see this one), we’re now conjuring up a mocktail AND a cocktail in the park! 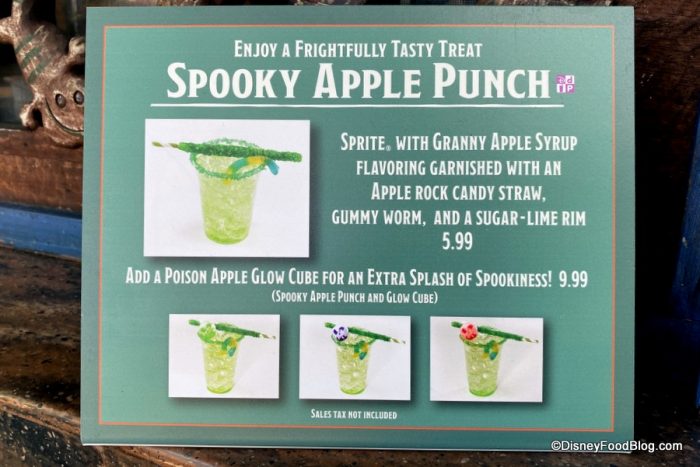 But you can also “Add a Poison Apple Glow Cube for an extra splash of Spookiness!” It brings your tally to $9.99. But clearly we liked the idea… 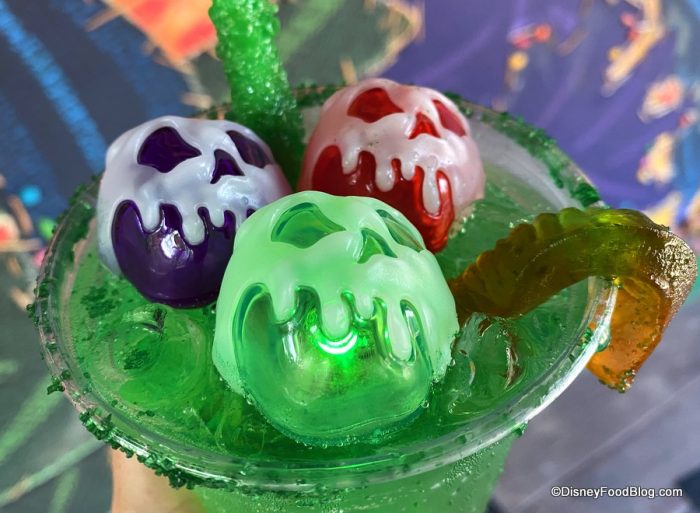 Yeah, there’s a LOT goin’ on here. First of all, that candy straw? It’s pretty much just for show, it definitely does not work for easy sippin’. 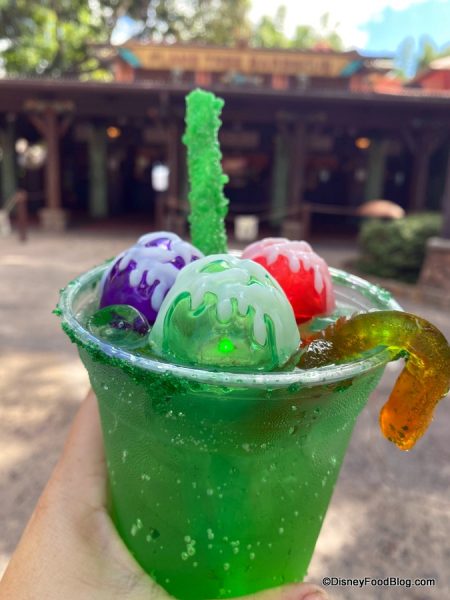 But beyond that, you can definitely pick up on the apple flavor and together with the burst of citrusy Sprite, it’s pretty refreshing! The drink itself is not overly sweet, even if the garnishes are a straight-up sugar rush! 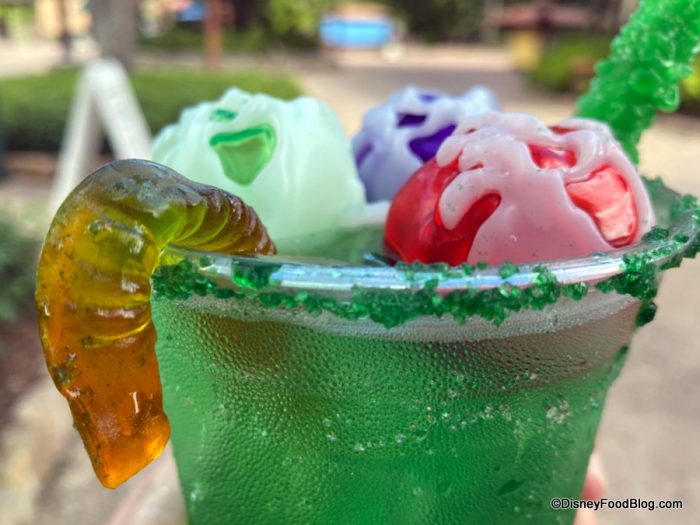 You can also get the Spooky Apple Punch at Flame Tree Barbecue. But THIS is the spot where you can also find the boozy Rotten Apple.

Angry Orchard and Fireball Cinnamon Whisky are served over ice, and a Novelty Poison Apple Glow Cube, and gummy worms. The Glow Cube is included in this one for $15.00 total. 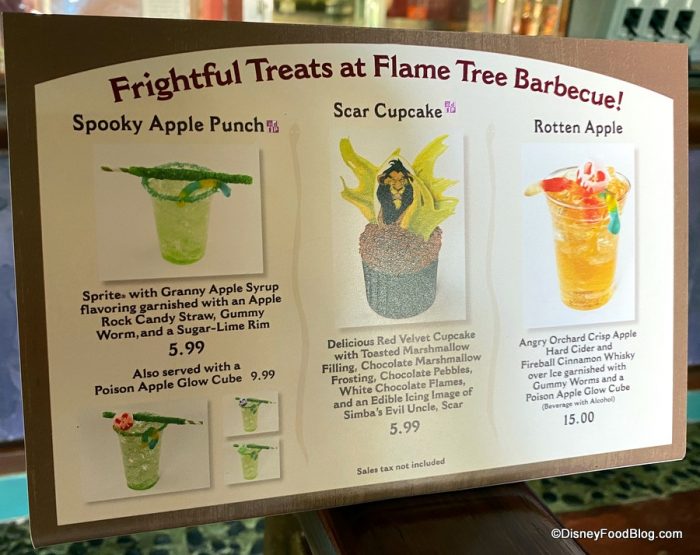 For fans of that fall combo of hard apple cider and cinnamon whiskey… well, you’ll love it, of course! 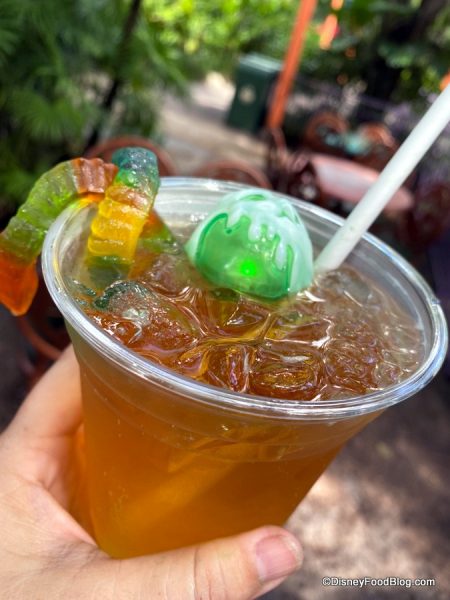 The cinnamon flavor wasn’t overwhelming, and is such a nice pairing with the apple cider that it’s no wonder that this is not a new combo served at the parks by any means. 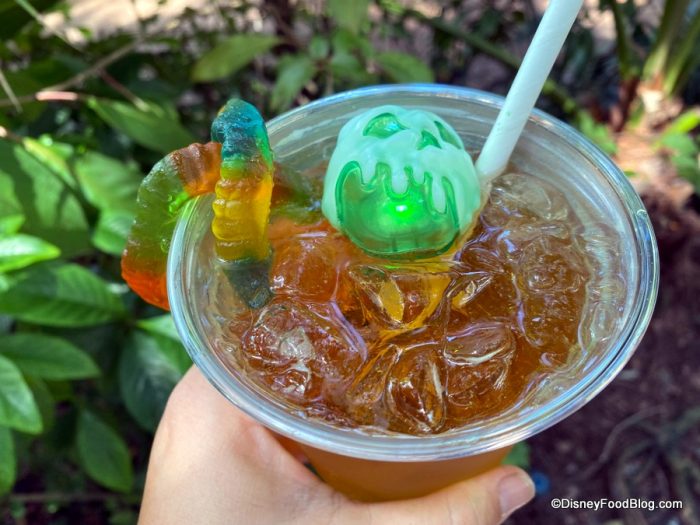 And THAT’S what they’re brewing up around Animal Kingdom this fall!

Find ALL of our Fall and Halloween treat and sip reviews right here!

So… pick your poison: are you up for a Spooky Apple Punch or a Rotten Apple? We’d love to hear it!

Which drink would you choose? Please let us know with a comment!

« We Asked Our Readers: Who is the REAL Star of The Haunted Mansion? Here’s What They Said.
This Spooky NEW Dessert in Disney’s Hollywood Studios Isn’t Pretty…But It IS Delicious! »