Hellllllo from Hollywood Studios! There has been a LOT going on around the park lately — from new snacks to some visitors from the Galactic Starcruiser. 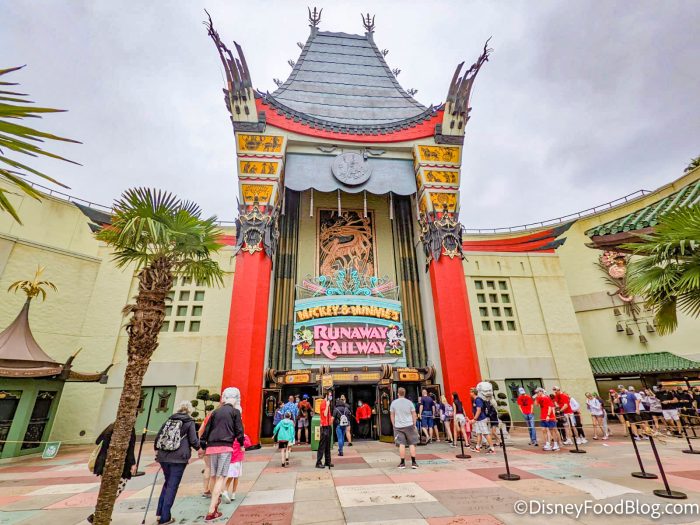 We love a good Ronto Wrap and a ride on the absolute classic Tower of Terror, but we also like to see the new things happening around the park! We go to Hollywood Studios on the reg to keep you up to date on the latest, so come with us as we see what’s new!

There are a BUNCH of new snacks that just debuted in Hollywood Studios, so let’s jump right in!

There’s a new Orange Blossom Shake over at Hollywood Scoops on Sunset Boulevard! 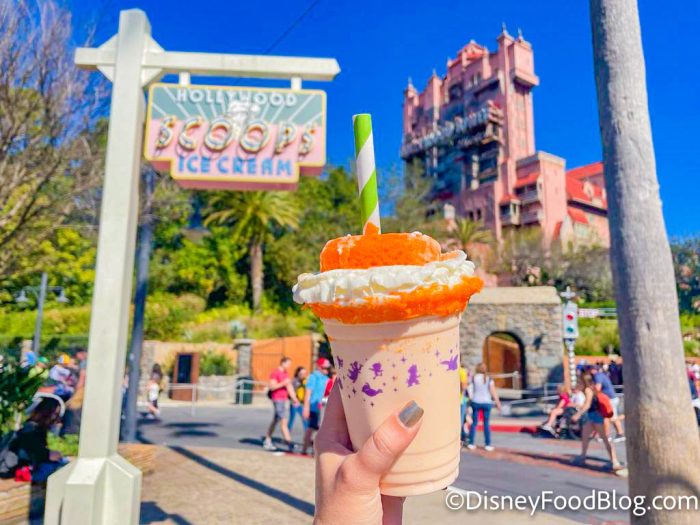 Click here to see our review of the Orange Blossom Shake

Right next door at Catalina Eddie’s is the new Enchanted Rose dessert! 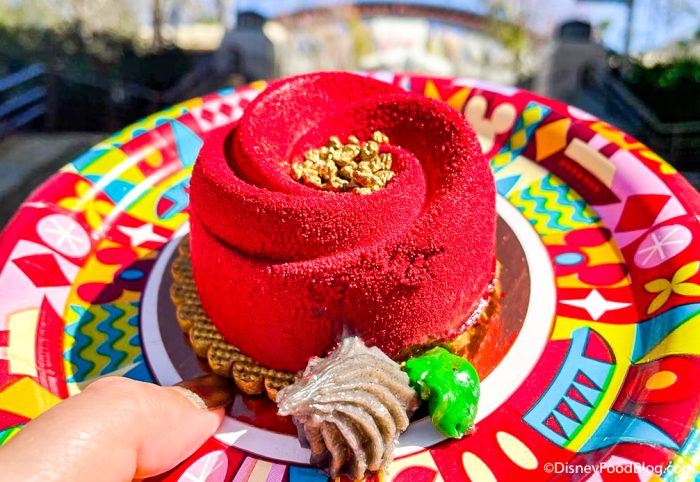 This treat’s $5.79 and is a Dark Chocolate Mousse with a taste of Blackcurrant and Morella Cherry-Chocolate Shortbread Cookie with Whipped Cookies ’n Cream Fluff and gilded Chocolate-covered Cacoa Nibs.

You can read our full review of the new Enchanted Rose here!

Over at Rosie’s All-American Café, there is a new S’mores Cupcake! 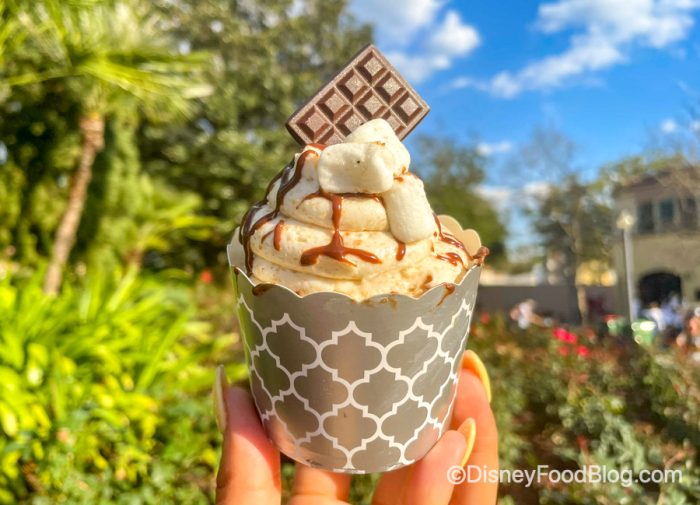 It’s a chocolate cupcake was filled with chocolate ganache, and was topped with a Graham Cracker Marshmallow Buttercream, Chocolate Drizzle, a piece of Chocolate, and Marshmallows! You can get it for $5.99.

Click here to see our review of the S’more’s cupcake!

At ABC Commissary there are TWO new desserts! First up, we have the Mint Chocolate Chip Cheesecake. 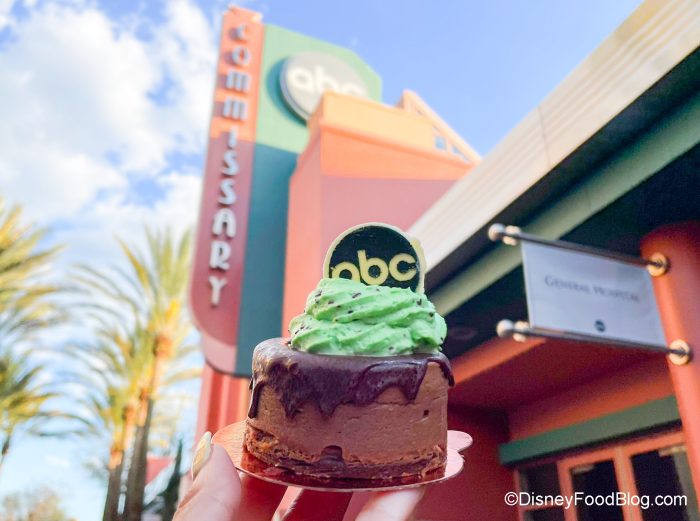 This is a Chocolate Cheesecake topped with Dark Chocolate Ganache and Whipped Mint-Chocolate Chip Cream for $5.49.

Click here to read our review of the Mint Chocolate Chip Cheesecake!

The second new dessert is the Tropical Tart for $5.49. 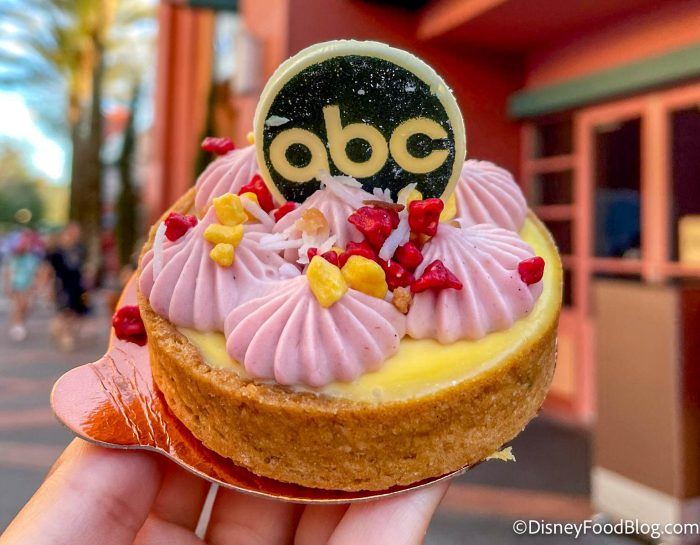 Over at The Trolley Car Café you’ll find the Chocolate-covered Apple! 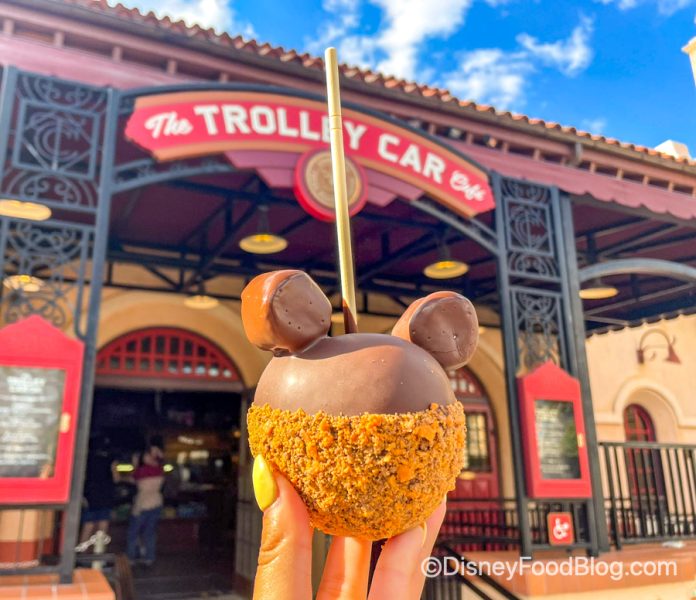 This is a green apple covered in milk chocolate with chocolate covered marshmallows forming Mickey ears, and a Butterfinger crumble for $10.99.

Click here to see our review of the Chocolate-covered Apple!

At PizzeRizzo, you can get the new Strawberry Cheesecake Cannoli! 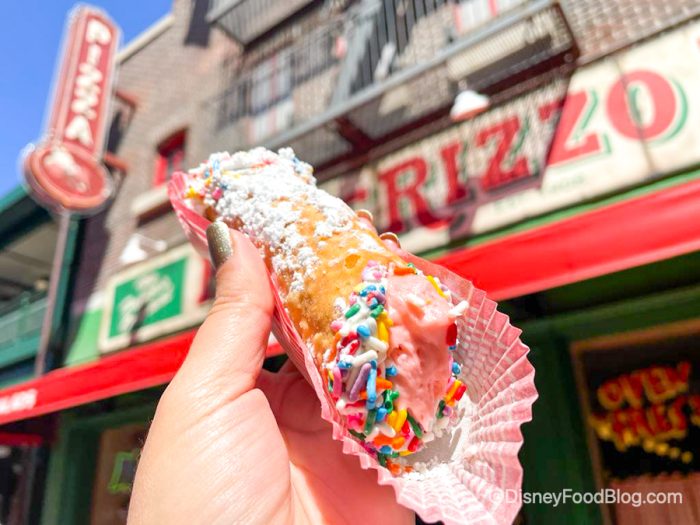 For $5.29, you get a white chocolate and rainbow sprinkle-dipped cannoli shell filled with whipped strawberry cheesecake filling!

Click here to read our full review of this cannoli! 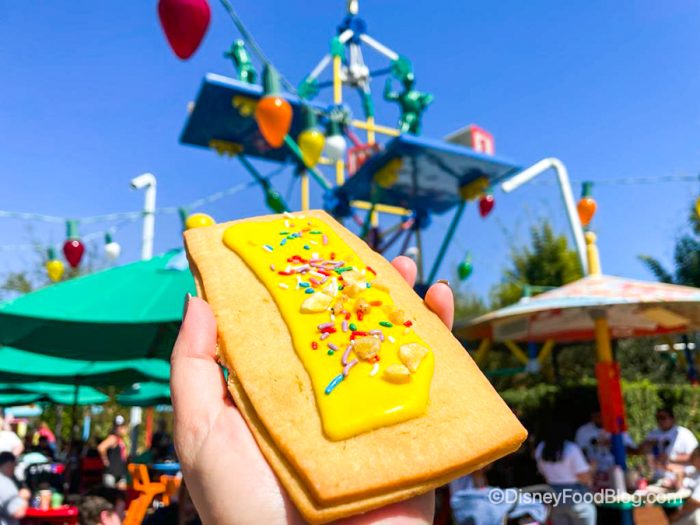 This is a peanut butter and chocolate fudge-stuffed pastry topped with banana fondant with banana chips and sprinkles for $4.29.

Dok-Ondar was back out from behind the curtain and moving in Dok Ondar’s Den of Antiquities — we haven’t see him in a while! 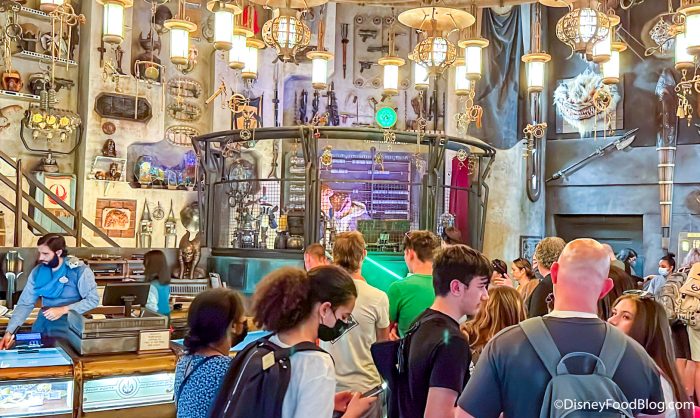 You can fully see the gateway to the Galactic Starcrusier from Galaxy’s Edge now. The planters are gone and you can see into the tunnel. 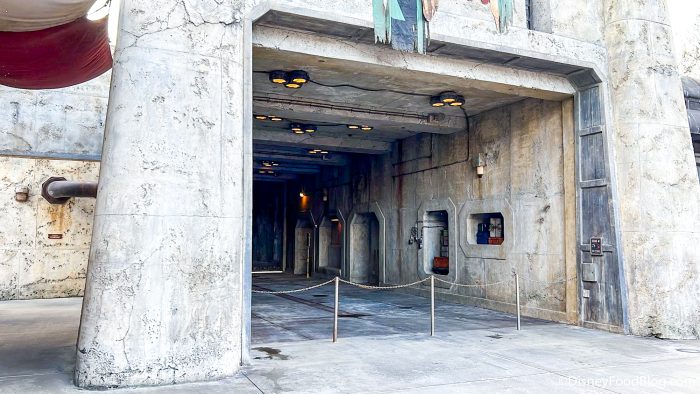 You can see in there now! 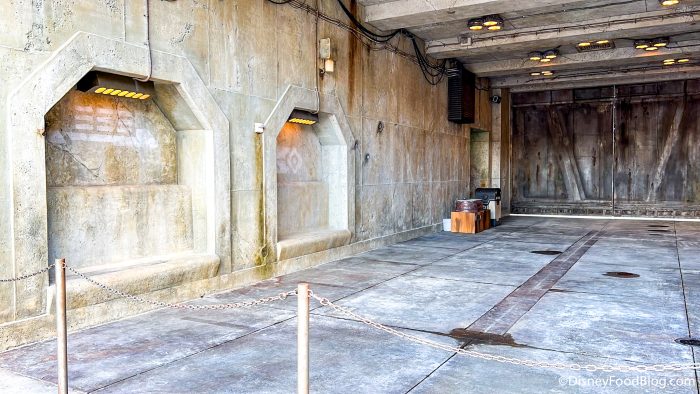 There is still a chain link rope, though!

They’re still repainting Sunset Club Couture over here, but it looks like it should be done soon! 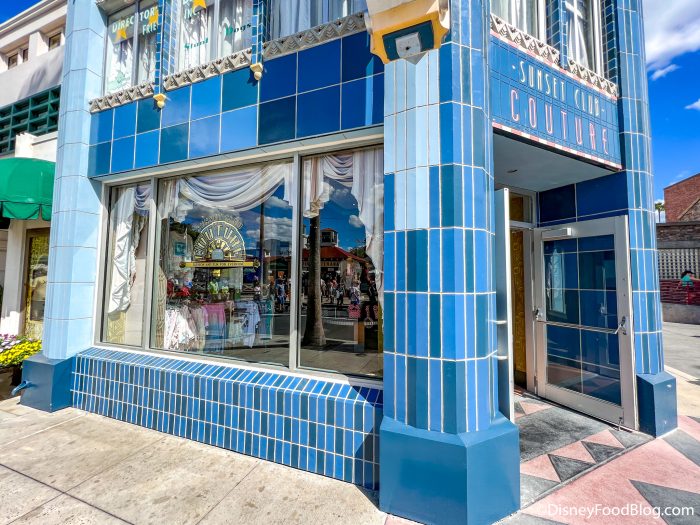 We’re just waiting on that light blue paint to be finished up. 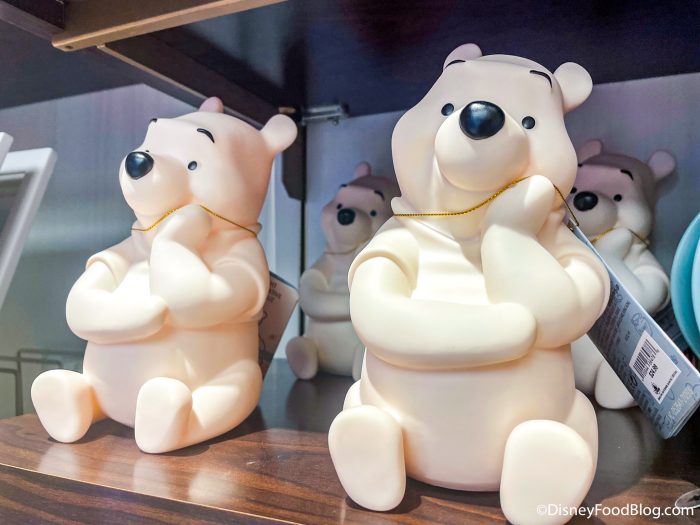 There is also a Toy Story figurine set in here! 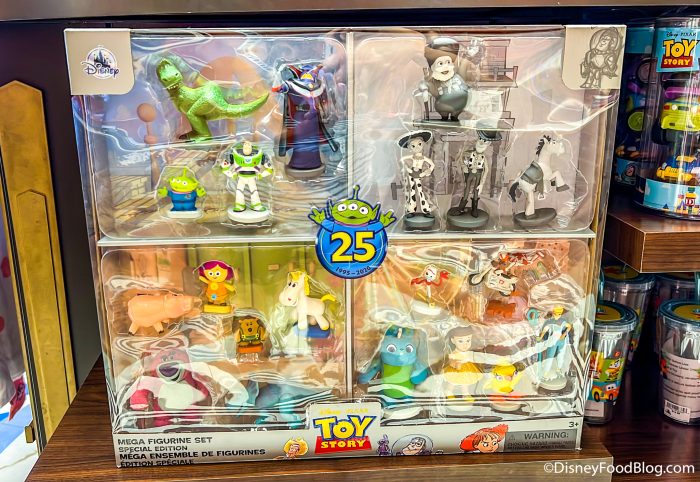 All of those toys!

The neon collection is over in Legends of Hollywood now, and we’ve seen all of the items before — except for this new baseball T-shirt! 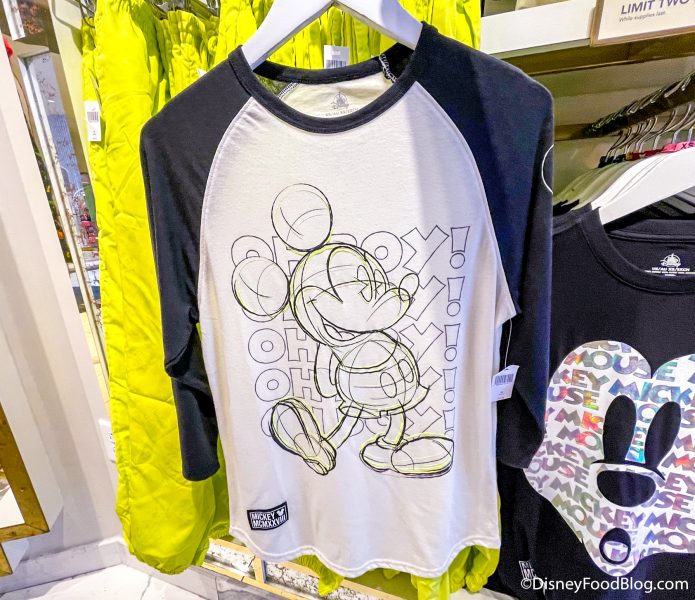 We found the ever-so-popular Amethyst Minnie Ears in The Darkroom! 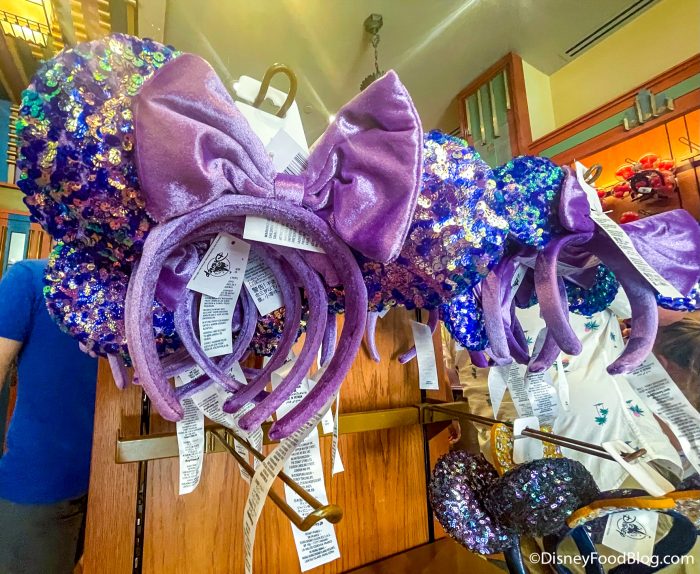 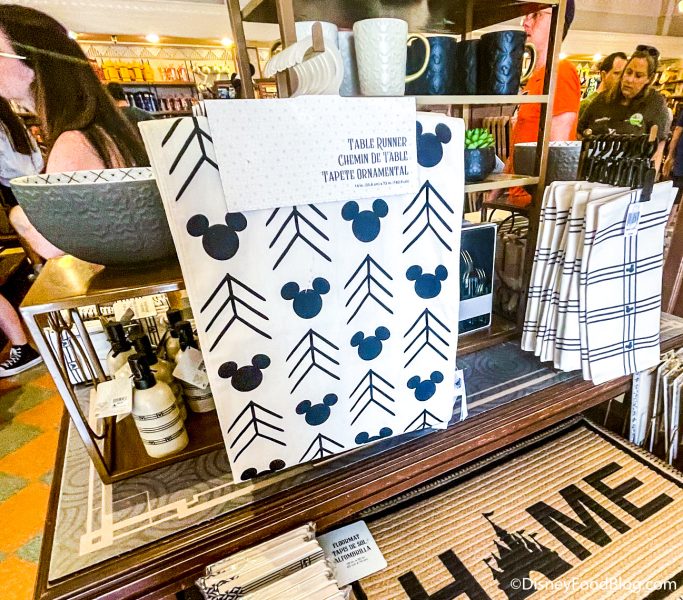 Add a little Mickey to your table! 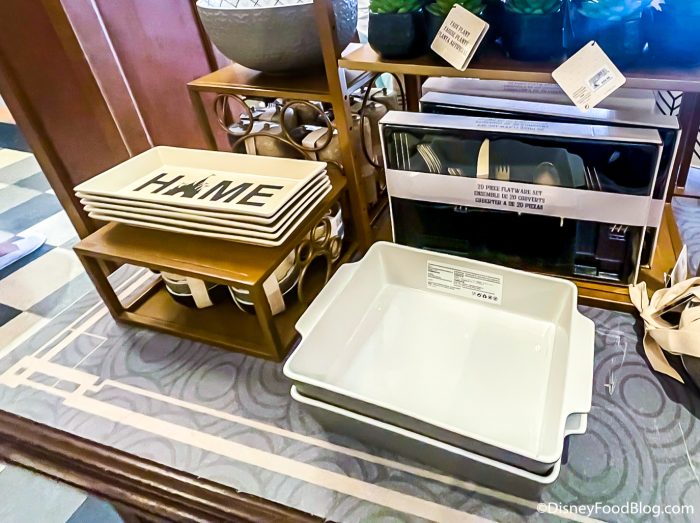 There are also new 50th anniversary Crocs that are white with some fun jibbitz! 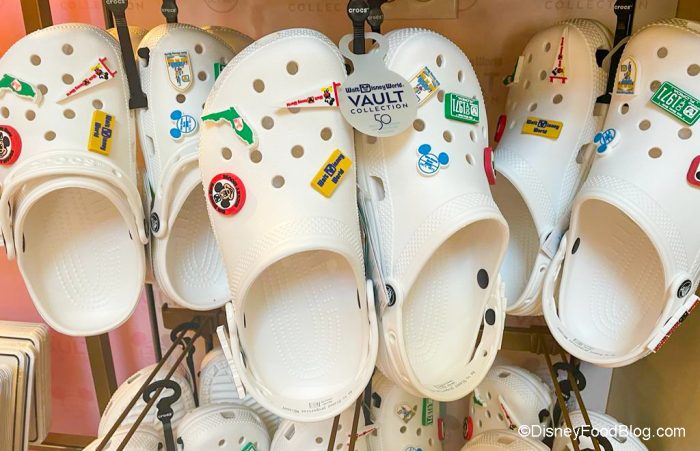 These are a lot more subtle than the map Crocs!

The bellhop hats are back in stock in the Tower of Terror gift shop! 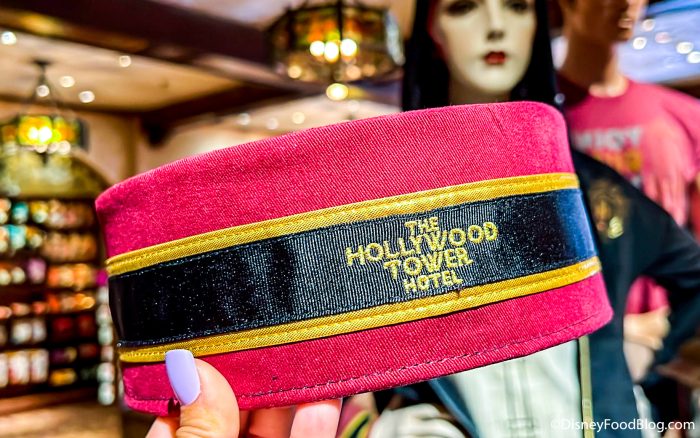 Go grab ’em while ya can!

We found some Cast Members doing some trivia in the park in front of the Chinese Theater! They taped off an area shaped like Mickey for you to stand… 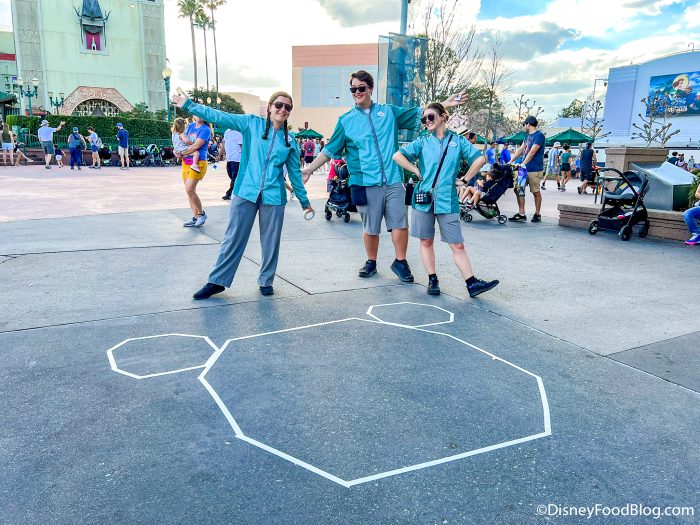 Get ready for some trivia!

…and then they gave you some Mickey stickers if you played some trivia! 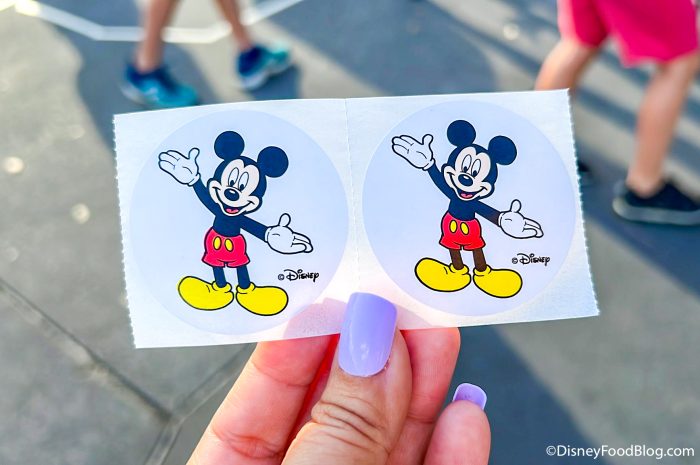 We got the questions right!

That’s everything new from Hollywood Studios! Stay tuned to DFB to for the latest Disney news and updates.

What’s your favorite ride in Hollywood Studios? Let us know in the comments!

« A Limited Time Mixology Experience Is Coming to Disney Springs. Get Your Tickets NOW!
REVIEW: You HAVE to Try This Apple If You Love the Butterfinger Cupcake in Disney’s Hollywood Studios »