Some dinosaur fans might love heading to Jurassic Park in Universal Orlando, but DinoLand, U.S.A. has a special place in our hearts over in Disney’s Animal Kingdom! 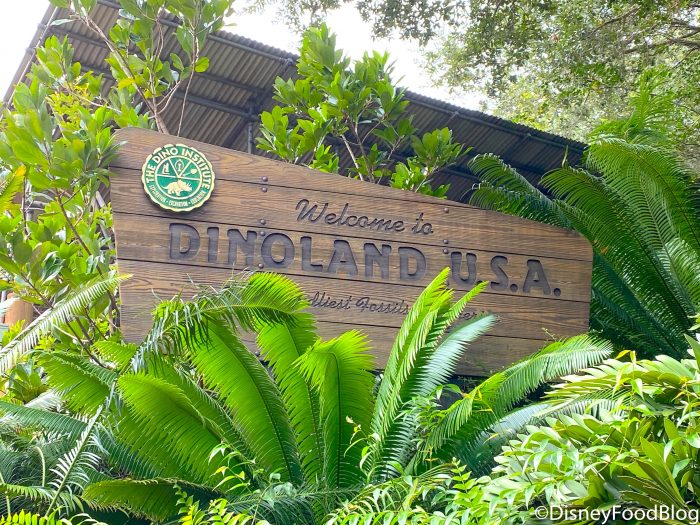 This section of the park has recently been pretty quiet ever since Primeval Whirl closed permanently. But, today, there was a bit of hubbub in the area since Fossil Fun Games officially reopened to guests exploring the park!

Since Disney is making sure to implement health and safety precautions all around the property, not every Fossil Fun Games booth is open at the moment. 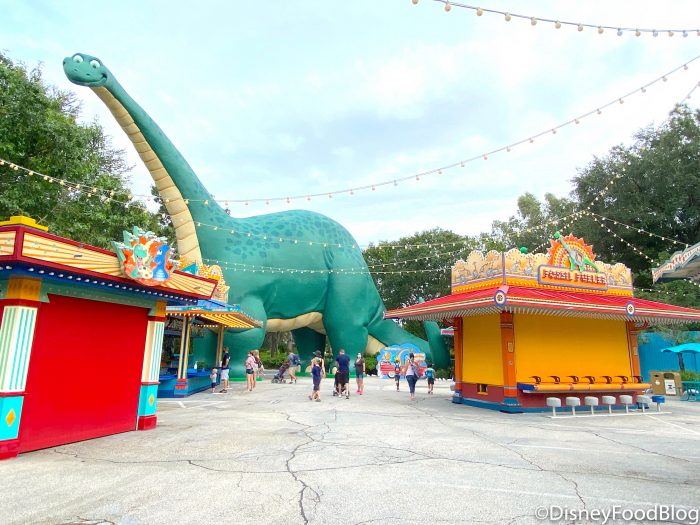 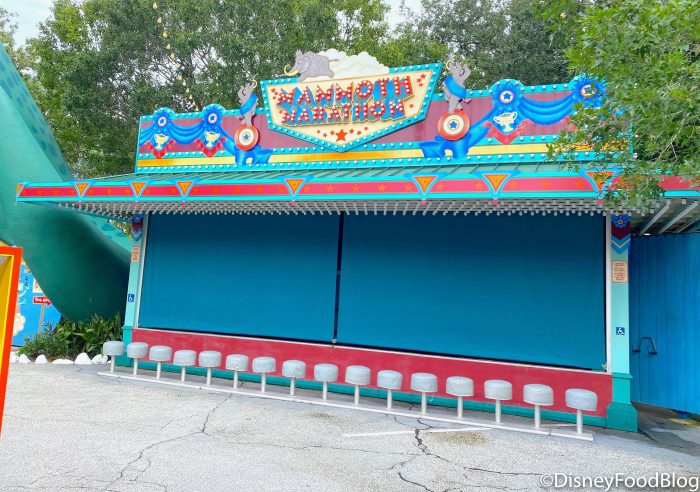 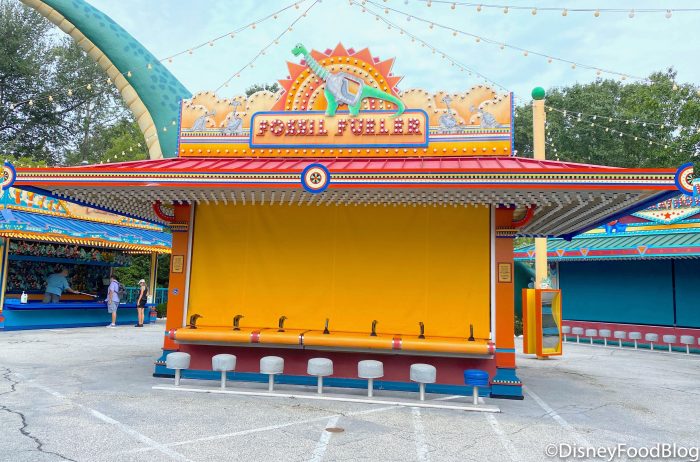 …and Whac-A-Packycephalosaur (Phew! That’s quite the name to write out!) are all closed currently… 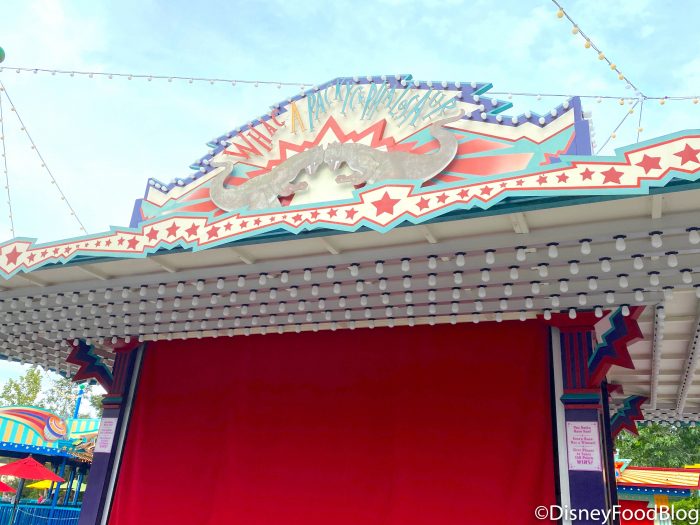 …you can still try your hand at games like Comet Crasher… 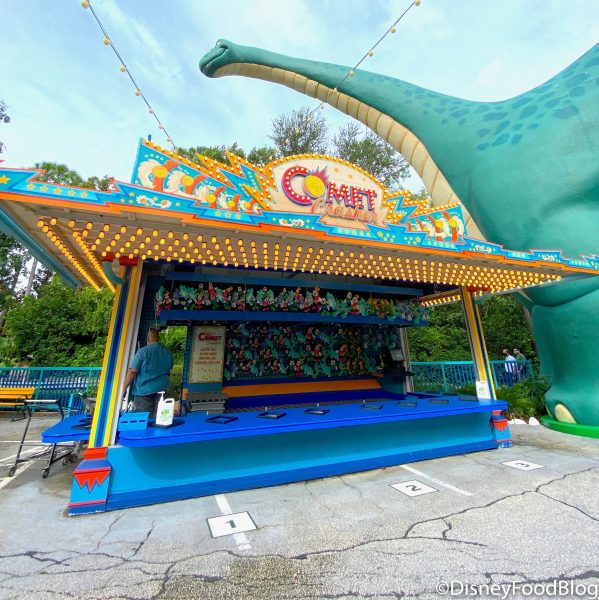 …and Bronto Score to win a few prizes and have a great time with your family! Plus, who doesn’t love a little friendly competition? 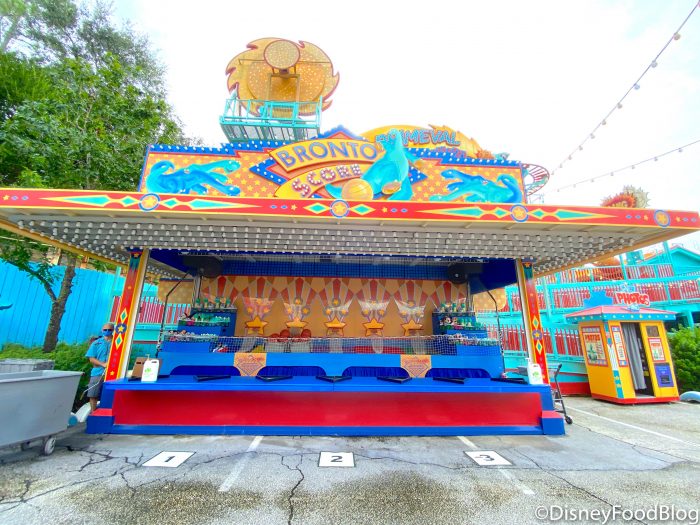 The booths are surrounded by distancing measures with stickers on the ground and designated numbers for guests to stand on while they play. 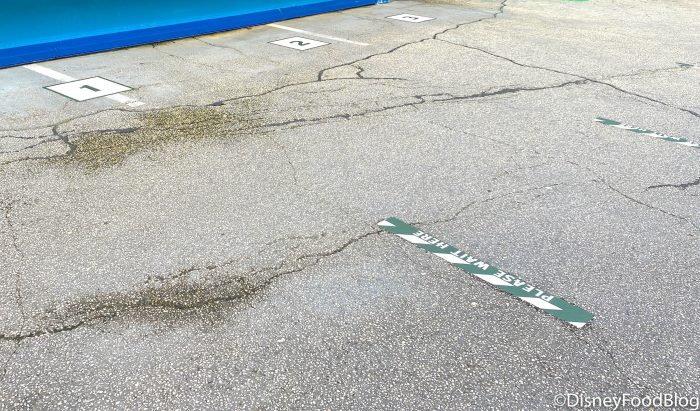 However, certain stations are closed in order to make more space in between the players. Hand-sanitizer is also available on the counter for guests to use before they participate in their games. 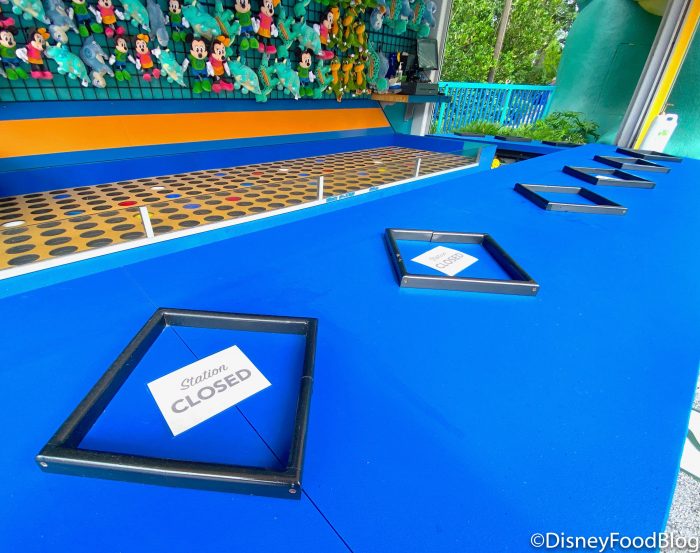 If you’re visiting with younger kiddos, they are able to stand on the counter to play games if it’s difficult for them to see over the counter. 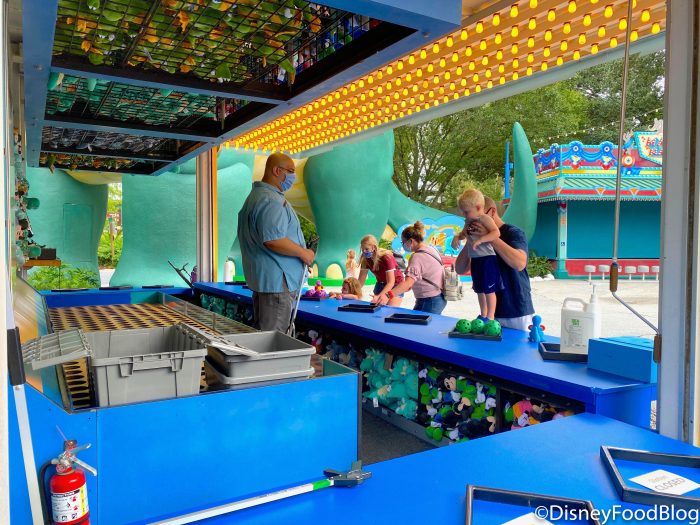 Before you play, though, be sure to head to one of the kiosks to purchase gameplay tickets! Each ticket costs $5 and counts for one game per person… 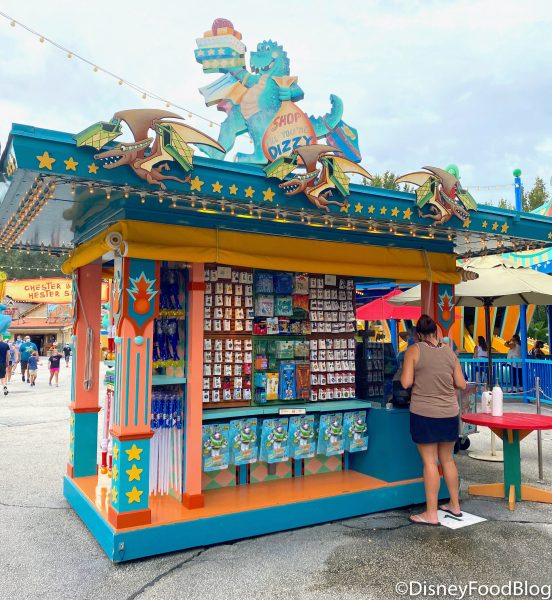 …and even comes with a little Animal Kingdom stamp after you buy your coupons! 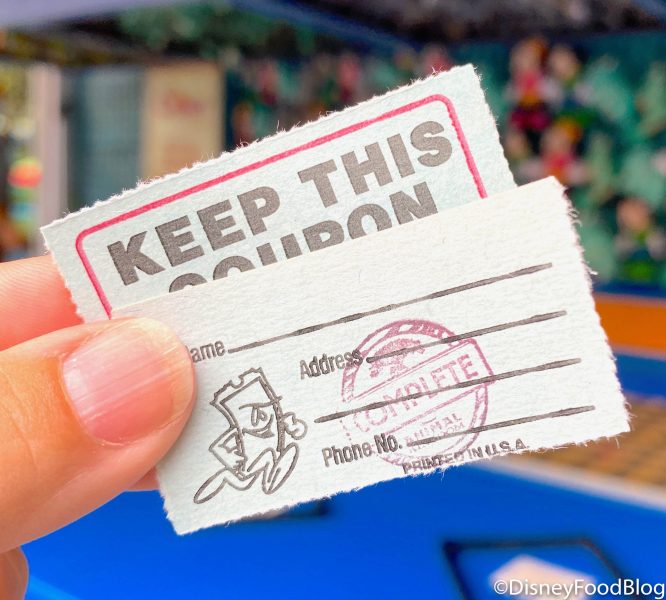 Right now, Comet Crashers is only allowing three people to play at a time to make sure that distancing measures are enforced. 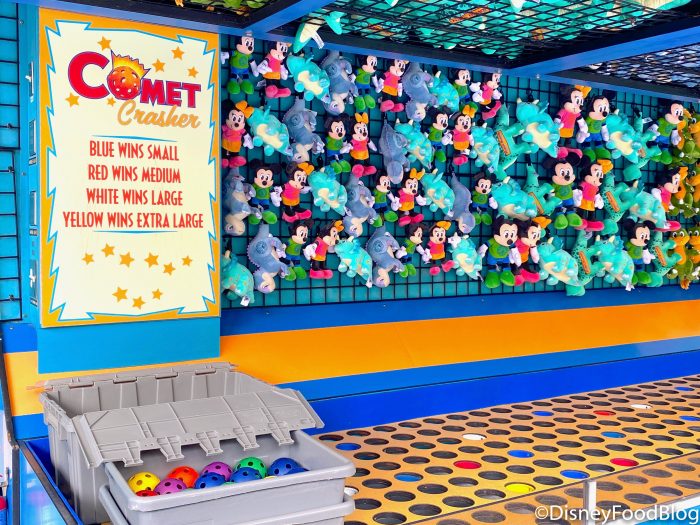 The Cast Member has a grabbing tool that’s used to pick up the unused and used balls to create less high-touch surfaces. The goal of the game is to try and throw your balls into one of the colored holes. If it makes it inside, players will receive a prize according to the color chart! 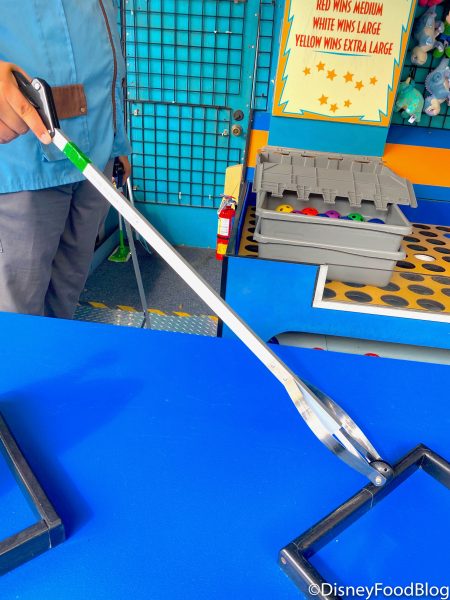 Along with Fossil Fun Games re-opening its booths, brand new prizes are hanging on the shelves for guests to win! While you can score brightly colored Mickey and Minnie Plushes… 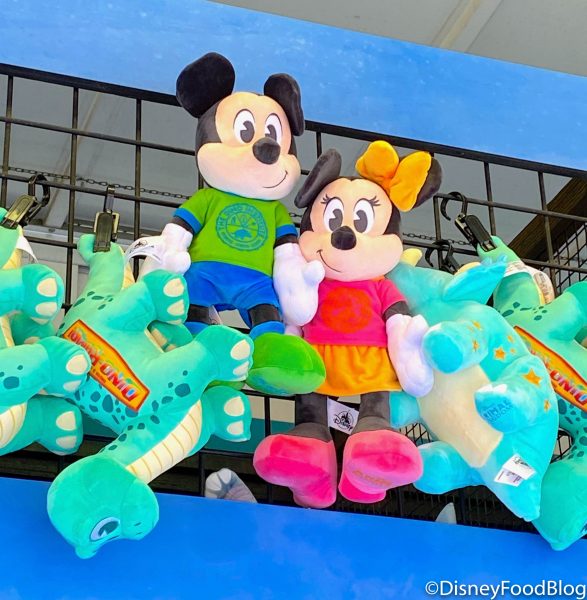 …there are a whole bunch of dinosaur friends, ready for you to take them home! 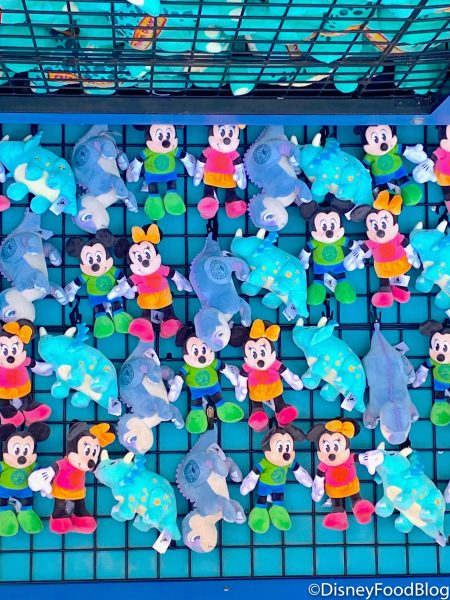 How can you NOT try to win them, when the plushes are this cute?! (It’s important to note that guests aren’t able to purchase these prizes. They must win the games in order to get them in Animal Kingdom.) 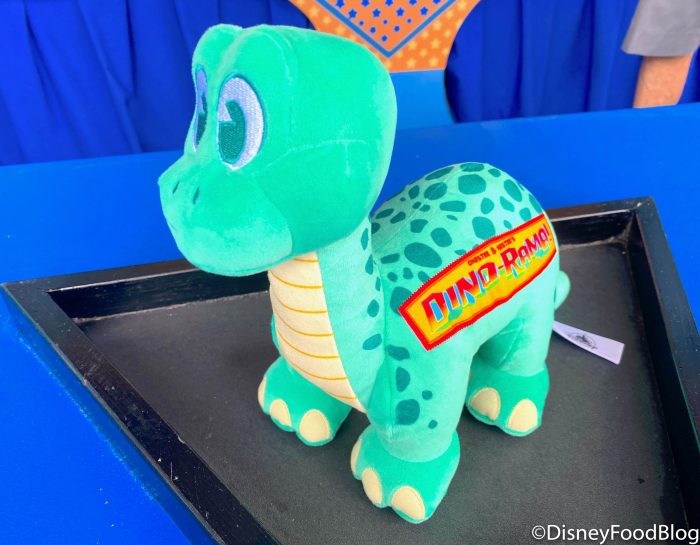 If you’re ready to shoot some hoops, Bronto Score is open to swish and score one of the new prizes at the booth! 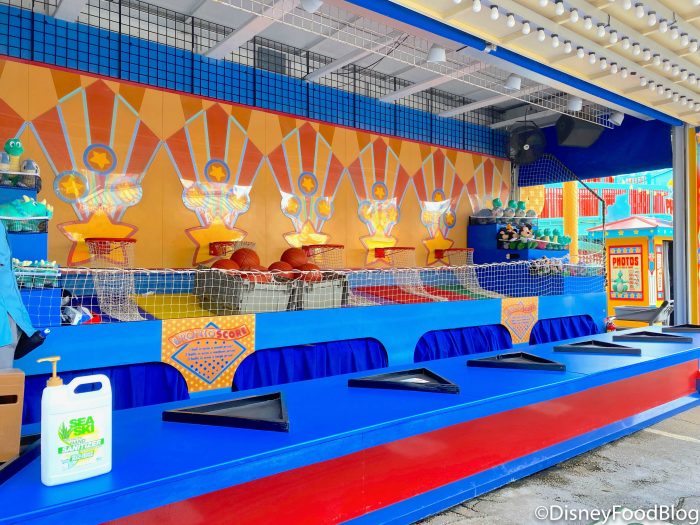 As an additional health and safety precaution, Cast Members return the same ball that guests use each time they play… 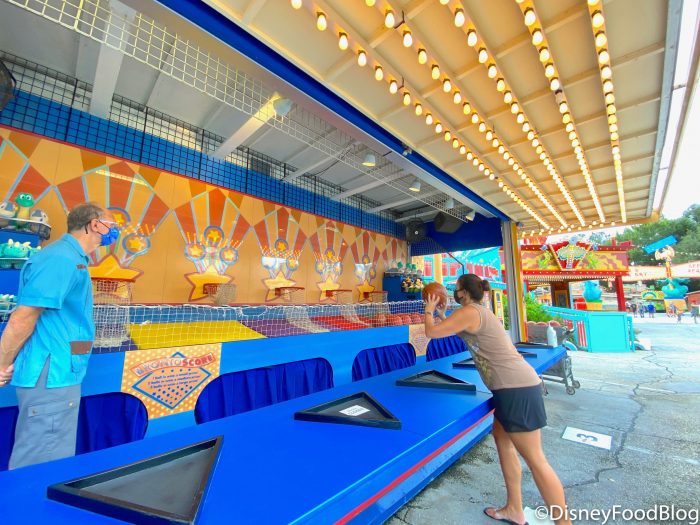 …and make sure to keep them sanitized consistently at Bronto Score. 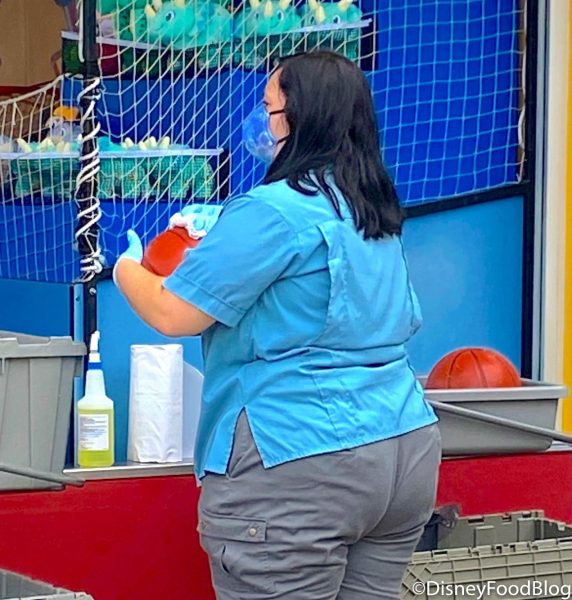 If you’re just itching to get your hands on one of the plushes (we totally are), Fossil Fuel Games will be open in Disney’s Animal Kingdom from 10AM until 4PM throughout the week.

As the parks continue to bring back some of our favorite spots around the parks, we’ll make sure to give you a first look! In the meantime, you can catch us trying to win one of those dinosaurs.

Take a look at everything else new happening in Disney’s Animal Kingdom here!

Have you been back to Disney’s Animal Kingdom yet? Let us know in the comments below!