Have you ever stayed at Disney’s Pop Century Resort? 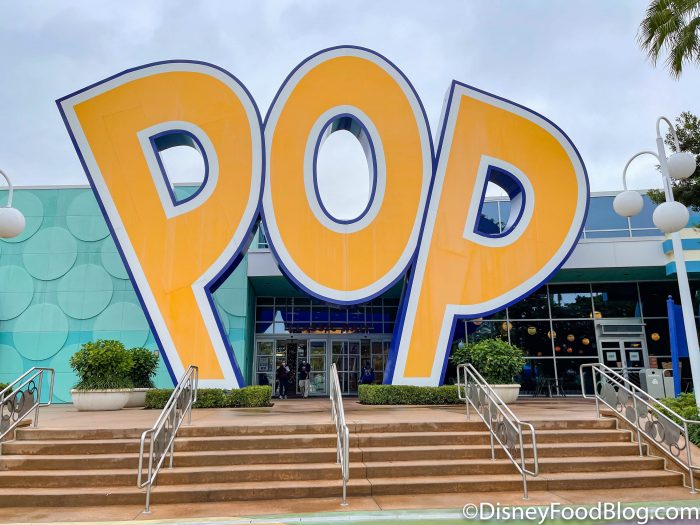 This “value” Disney Resort hotel takes guests back in time to the second half of the 20th century. With buildings themed to various decades, reasonably priced rooms, and access to the Disney Skyliner, Pop Century has become a POP-ular choice for many guests. Today, we’re stopping by the resort and giving you a look INSIDE one of the rooms.

We’re staying in a Standard Pool room with a pool view. In terms of price, choosing the pool view tends to add a few more dollars onto the room price each night. Depending on when you stay, the rates will change, but the pool view added about $5 each night for us. So let’s take a look around!

We’re checking into Pop Century for the night and we are excited to give you a detailed tour! pic.twitter.com/U37wjja8gf

The Standard Rooms at Pop Century come with either a king bed or a queen bed and a queen-size table bed, which is what we have here. 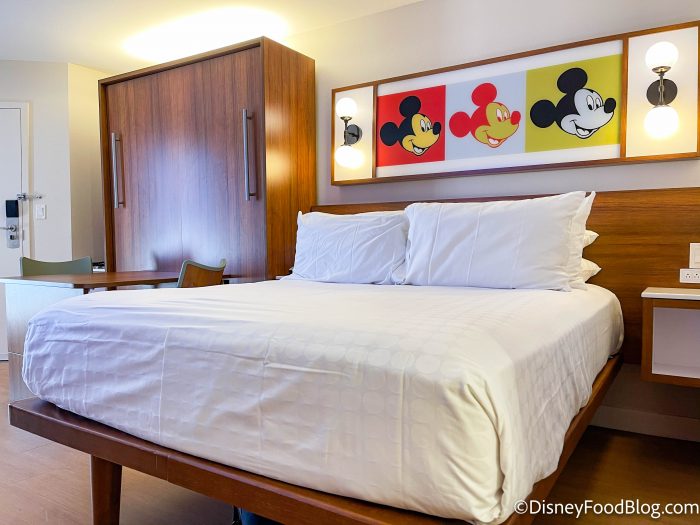 Let’s take a closer look at this pop art of Mickey! It really contributes to the themed look in the newly-updated room. 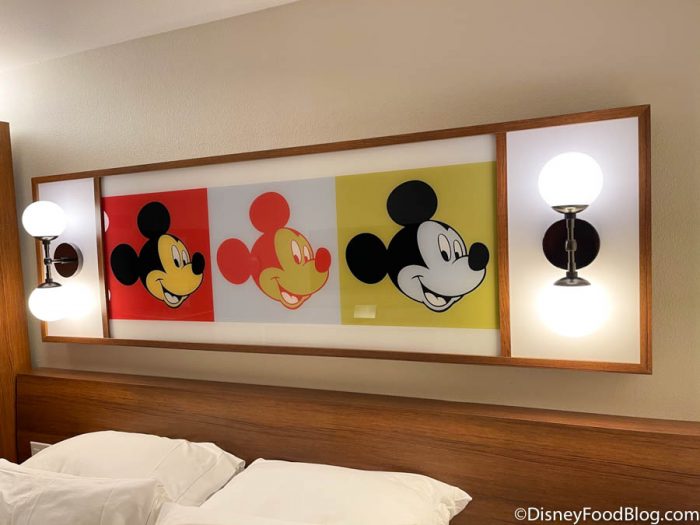 When folded up, the second queen bed has a table with seats for two. You can pull it down at night to fit your room for four people. 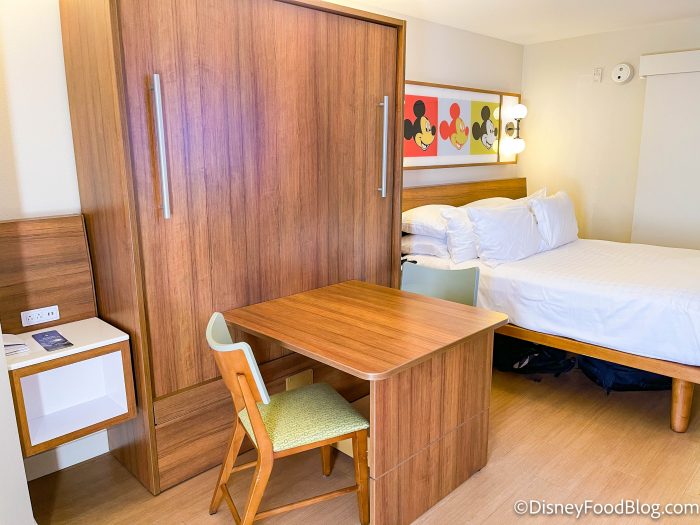 When pulled down, the bed features some pop art of Pluto dreaming of munching on bones. 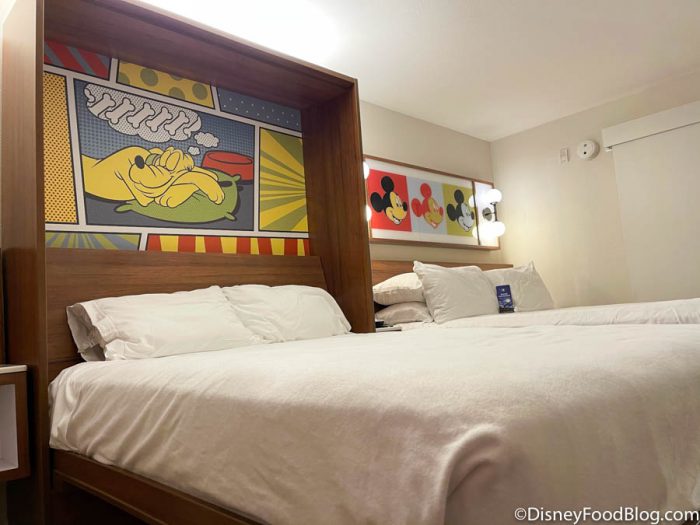 The room is also home to a TV and a dresser with drawers and cabinet storage. In the corner, you’ll find shelving with a coffee maker and a mini-fridge. 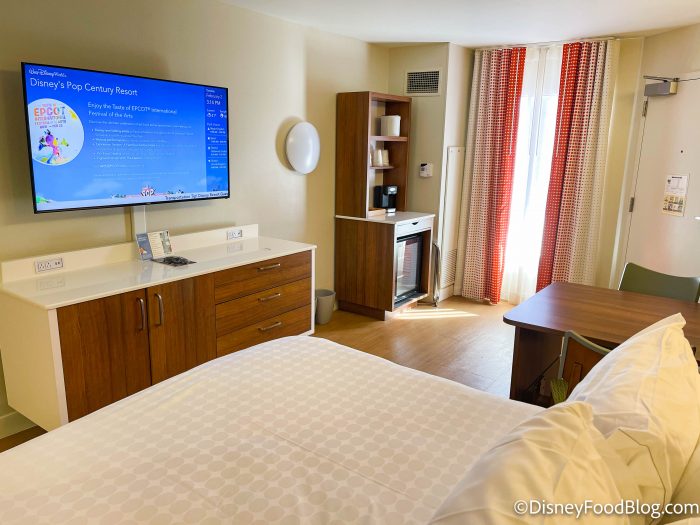 In addition the coffee maker, this shelving has cups and a selection of Joffrey’s coffee, so you can grab and go on your way to the parks. 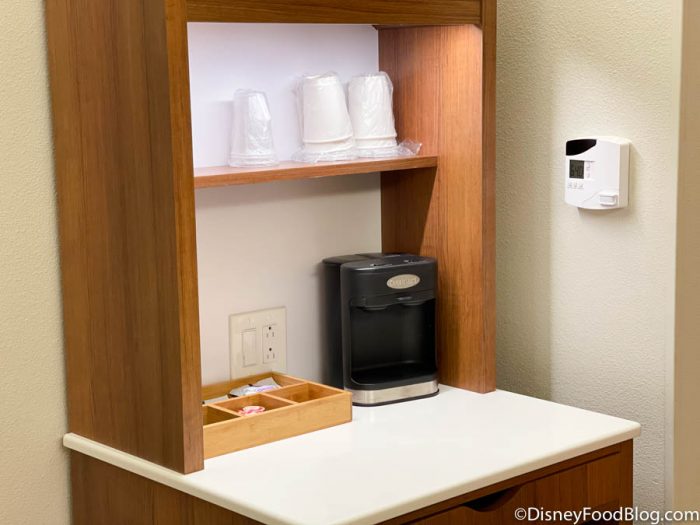 Here’s a glance at the room from the angle of the door. The bathroom is in the back of the room, and our room happens to connect to the one next door. Not all rooms at this resort are adjoining rooms, so if you need that, you’ll want to request it ahead of time. 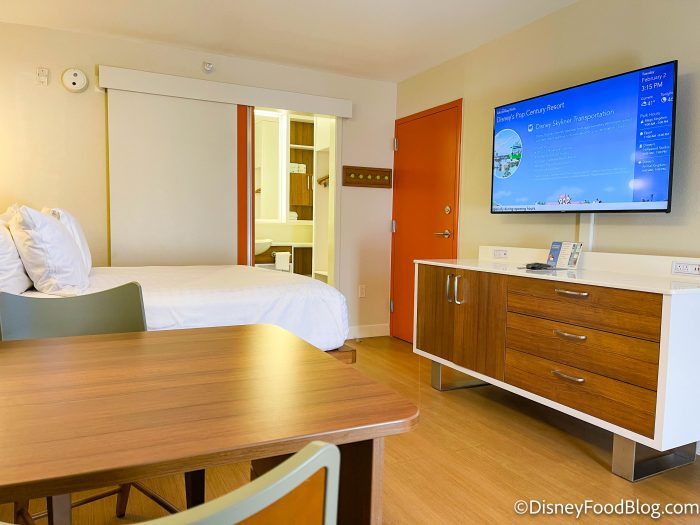 Let’s get into the details of this room. There are hooks by the door to hang bags, coats, or ponchos to dry. They kind of look like the buttons on Mickey Mouse’s shorts! 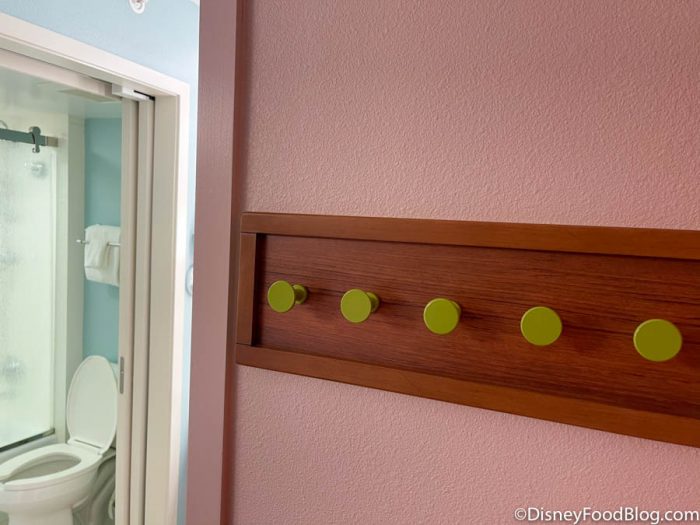 There is also a safe in the dresser to hold any valuables while you’re out. 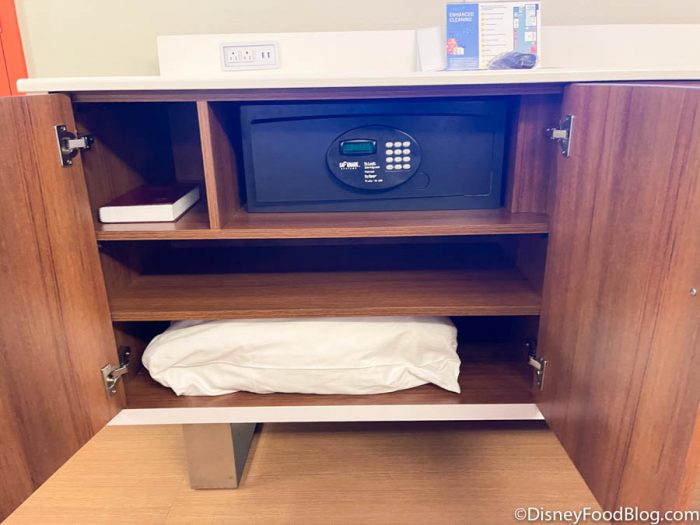 A display highlights all of the touch spots in our room where enhanced cleaning took place, as part of Disney’s commitment to heightened safety procedures. Our remote was sanitized and placed in a sealed plastic bag. 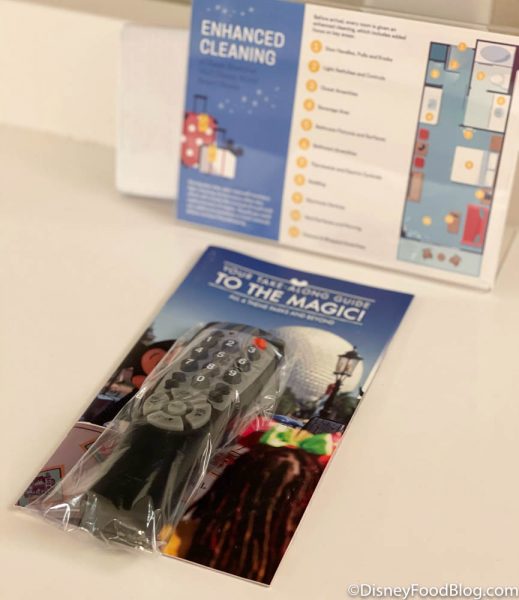 Let’s move into the bathroom! There’s a large mirror on the wall above the sink, as well as a smaller magnification mirror. We’ve got quite a bit of storage and shelving in here. 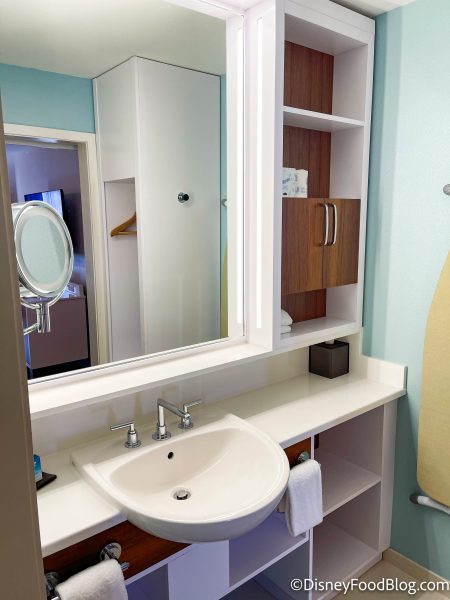 There’s a sliding door separating the toilet and shower from the sink area, which is convenient for multiple people getting ready at once. Our particular shower has a tub and a sliding door, as well as a movable shower head. 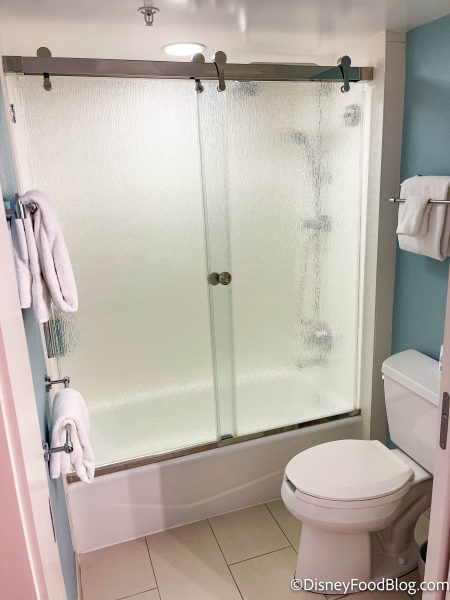 Inside the shower is a selection of Disney’s shampoo, conditioner, and body wash. These are refillable, reusable bottles. 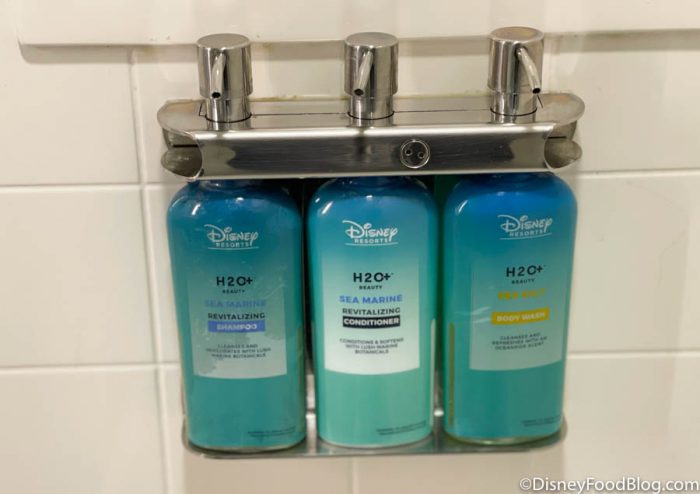 These rooms were renovated a few years ago, and the features are definitely fancier than some of Disney’s older resort rooms.

Another view of our room at Pop Century! pic.twitter.com/4mpv3RviRR

Earlier, we mentioned that our room comes with a view! Don’t worry, we’re giving you a peek at that too. 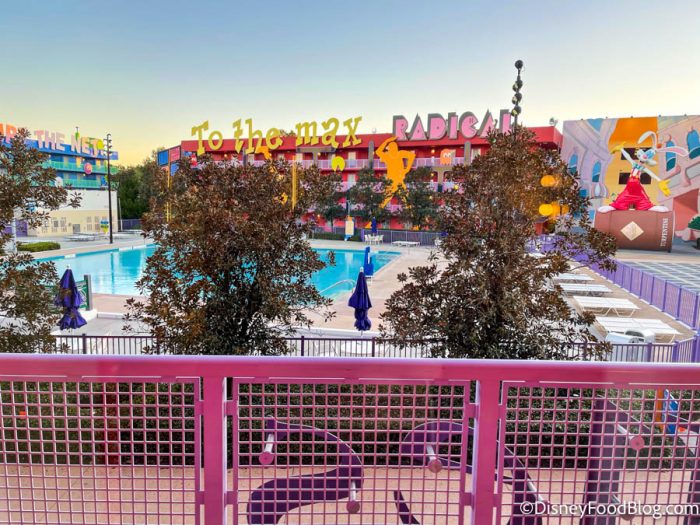 Across the way, you can see the larger-than-life theming of the buildings, along with a HUGE Roger Rabbit.

Here’s our view from our room! Can you guess what section we are staying in? pic.twitter.com/UrvbVzsLjN

Thanks for checking out our room at Disney’s Pop Century Resort, and make sure to stay tuned for more! Follow along with DFB for the latest in Disney World news, including updates on the Disney Resort hotels!

Click Here to Check Out the Food at Disney’s Pop Century Resort!

Have you ever stayed at Pop Century? Let us know in the comments!

« REVIEW: How Do You Socially Distance at a Hibachi Table in Disney World?!
Did You Forget About This Disney Resort? We Almost Did. »