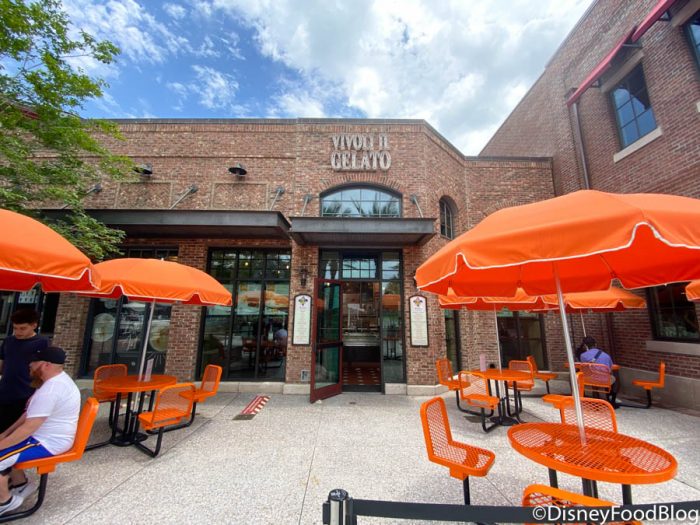 We’re talking about fruity potato chips, a Bailey’s brownie sundae, fruit sushi, and more! But today, we tried TWO new snacks involving gelato, and one of them had a spider on it!

But we’ll get to the spider in a bit…

We popped into Vivoli il Gelato at Disney Springs and we noticed that the Burgerlato has officially made it on the menu! We recently learned that this new treat was coming to Disney Springs in honor of National Burger Day on May 28th, and we were excited to try it! Speaking of interesting snacks…this is a truffle brownie, cake batter gelato, strawberry sauce, and bacon inside an Italian doughnut for $11. 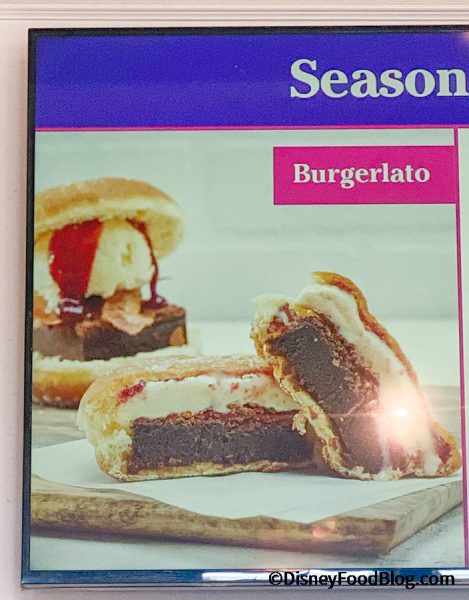 Interestingly enough, it doesn’t look as unique as it sounds. And the flavor is almost predominantly coming from the brownie, which is a very rich chocolate. Just after that, we could taste the donut (and this is an Italian donut, so it’s much lighter than a traditional American donut). 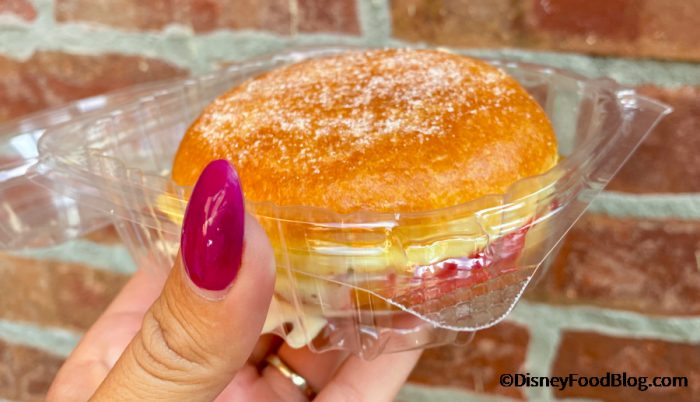 The strawberry sauce, though, gets lost when you get a bite of everything together, but if you can get a bite without any brownie, the sauce is quite good. It could probably use a little more of the strawberry sauce to balance out the flavors. The gelato is also great, but gets overpowered by the brownie and donut. 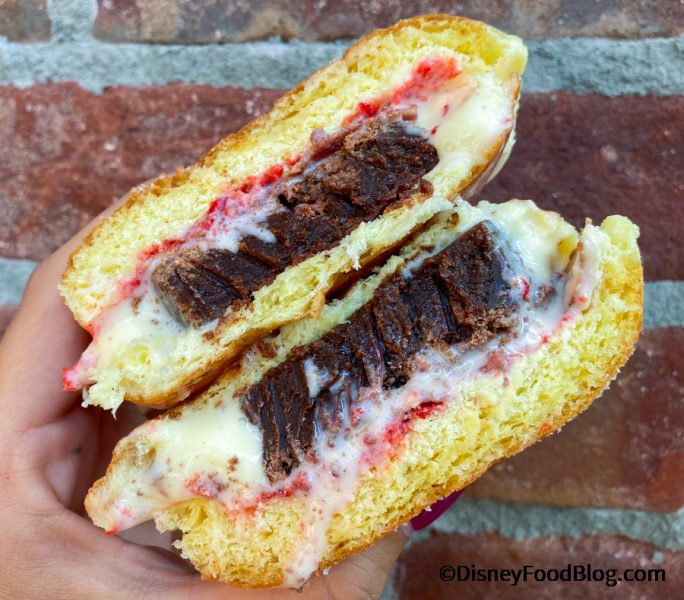 But what really caught our eye was a new menu item called the Scarlet Spider. It’s made with Cookies and Cream Gelato, Milk, Waffle Cone, Chocolate Sauce, Strawberry Sauce, Sprinkles, and Whipped Cream. 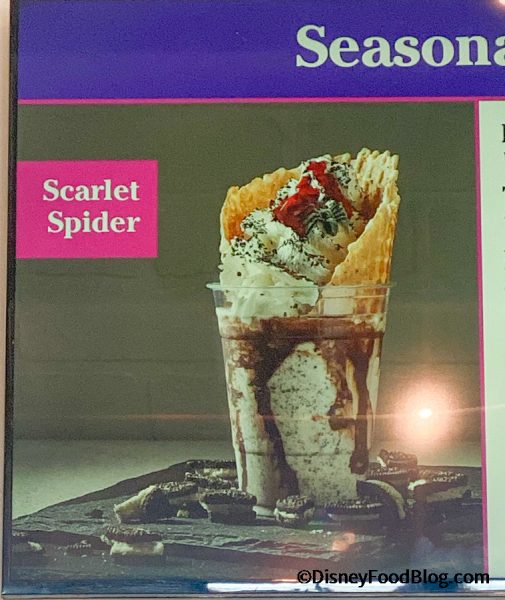 Like, we HAD to try it, right? It tastes like a cookies and cream milkshake, and well, we have no problem with that! The waffle cone also added a nice crunchy addition to the dessert. 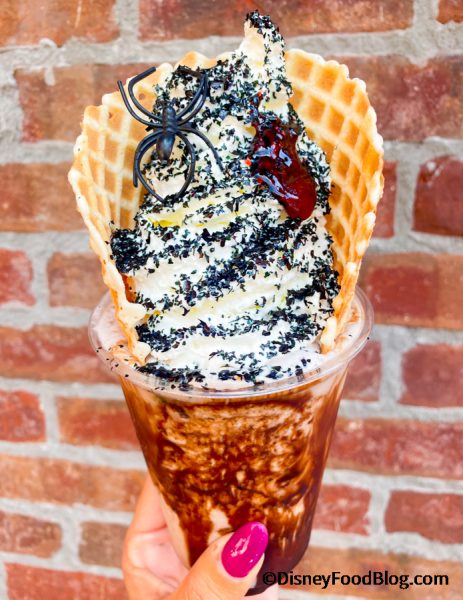 Um… there’s something on there…

Did we mention there’s a SPIDER on it? 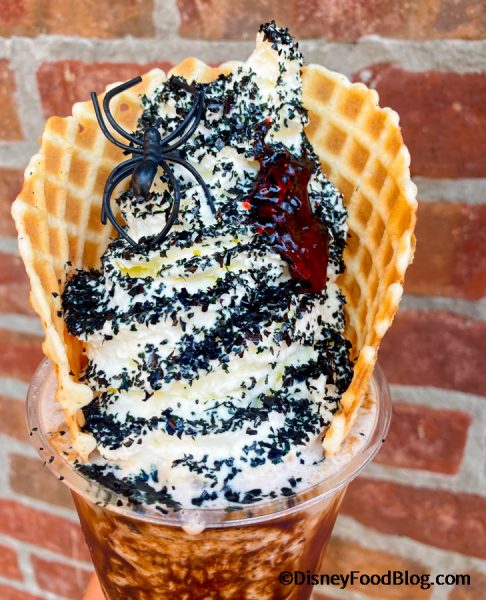 Um…waiter…there’s a spider in our food.

By the way, the spider is NOT edible. It’s actually a spider ring! 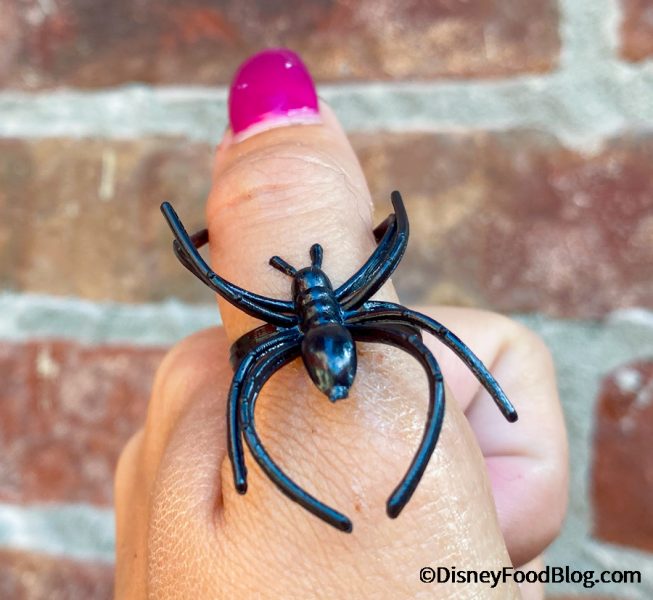 And if you haven’t figured it out, the drink is an homage to Disney’s upcoming Black Widow movie! So pretty cool, right? It’s available now for $15. We’ll be back soon to try even more new stuff, so stay tuned!

What do you think? Would you drink something with a spider on it? Let us know in the comments!

« Find Out How to Tune Into Disney’s Livestream for the Cruella Premiere!
Review! Did We Totally Dig This Groovy 70’s-Inspired Cocktail at Disney World? »