If you’re a Disney history fanatic, then you know that the parks are filled with rich backstories and intriguing details.

There are a lot of things you may not know about EPCOT!

EPCOT is no exception, with a history spanning nearly 4 decades. World Showcase is perhaps the most interesting part of the park, with 11 different countries represented throughout in unique ways. Each pavilion is such a solid interpretation of each country’s culture that it may leave you wondering how Disney pulls it off. But does Disney actually run these pavilions? Who owns the World Showcase pavilions, anyway?

When Were the Pavilions Added to the Park?

First, let’s start things off with a little history. The first 9 World Showcase pavilions opened with EPCOT back on October 1st, 1982. The other two countries were added later — Morocco in 1984 and Norway in 1988. 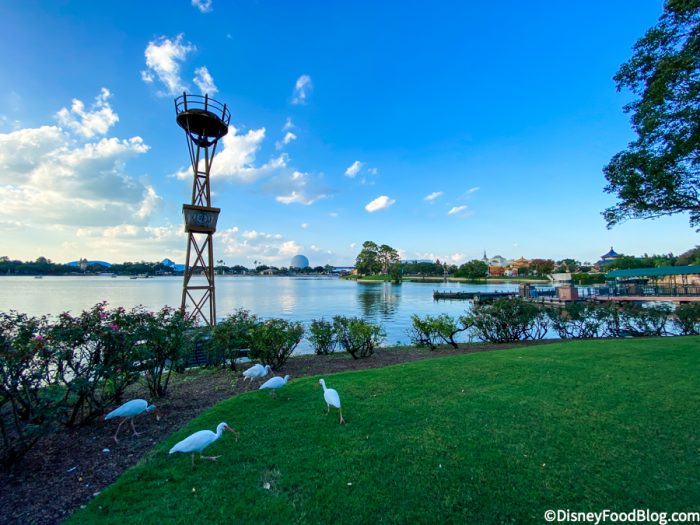 No new countries have been added in a while!

BUT…there’s room for more. Surprisingly, no new countries have been added since then, even though there’s space for more. There has been a lot of chatter over the years about which countries could come in the future. When EPCOT first opened, pavilions were announced for Spain, Israel, and Equatorial Africa, but all three were eventually canceled.

So Who Owns the Pavilions?

Actually, Disney owns all of the World Showcase pavilions. The pavilions themselves aren’t owned by their respective countries’ governments, and none of them are even sponsored by those governments anymore! 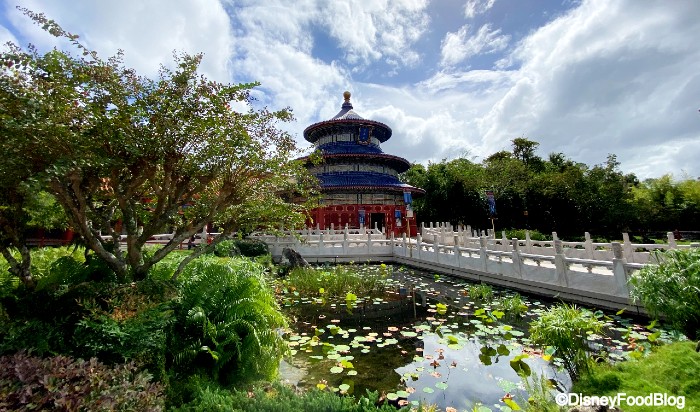 Officially, Disney owns all the pavilions!

While many of them are sponsored by private companies, those companies don’t “own” the pavilions. They’re still officially owned by Disney and some of the operations (like restaurants and shops) are run by private companies. These aren’t always easy to identify either. You know how some rides say “sponsored by Siemens” or “sponsored by GM?” You won’t find a big arch in the China Pavilion or Italy Pavilion saying who sponsors them (with one exception we’ll mention below!).

Click Here to Learn About Hidden Gems in the World Showcase!

Were the Pavilions Originally Sponsored/Paid for by Their Countries’ Governments?

Only one pavilion was originally fully sponsored by the country’s government, and that was the Morocco pavilion! The king of Morocco actually sent his own artisans over to work on the tile work for the pavilion because he wanted it to accurately represent his country’s culture. 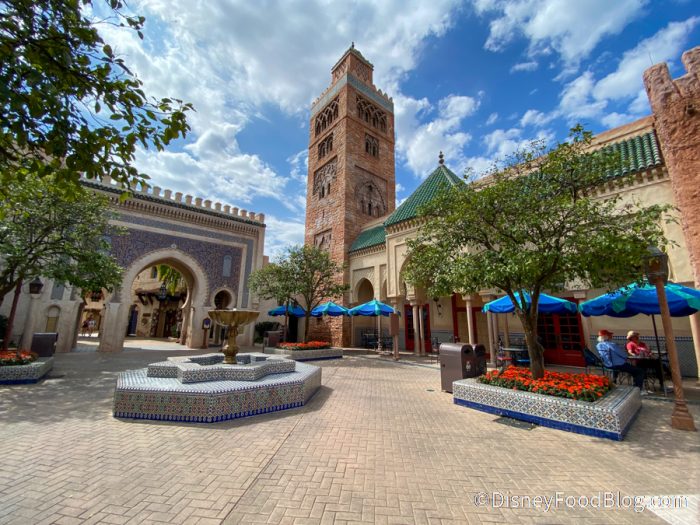 This pavilion is so beautiful!

Since then, the pavilion’s operations have been overseen by an independent operating company but still sponsored by the Kingdom of Morocco, but Disney took over at the end of 2020. 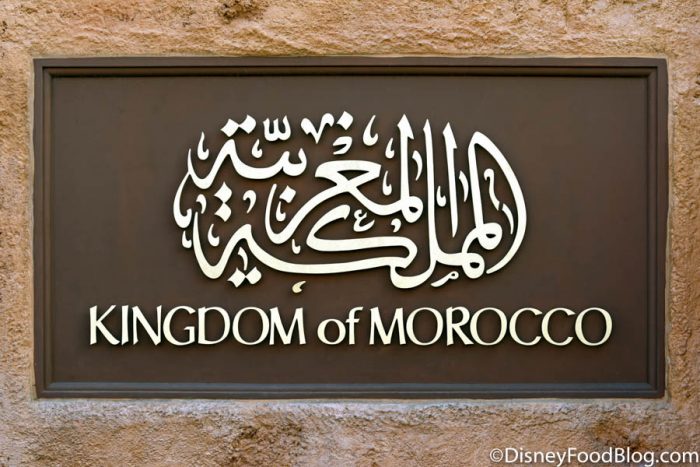 The Norway Pavilion was partially sponsored by the Norwegian government for several years, but those donations ended in 2002. The other pavilions are all run on sponsorships from private companies and Disney.

Take Our Video Tour of the Morocco Pavilion!

So Who DID Sponsor the Pavilions?

When EPCOT first opened, all 9 of the pavilions had corporate sponsors except two. Canada and China didn’t have companies tied to them, which explains why these two pavilions don’t have quite as much to offer as other countries do. (They’re mostly just restaurants when compared to much more robust pavilions like France and Norway!) 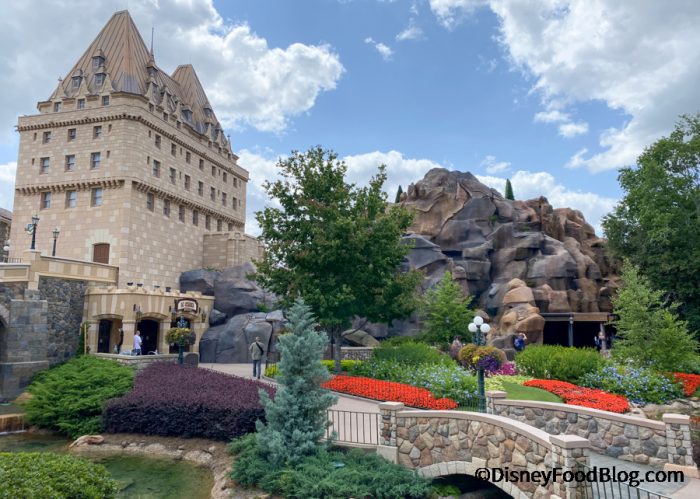 The Canada Pavilion doesn’t have a whole lot going on.

When Mexico first opened, it was sponsored by Moctezuma Brewery and San Angel Inn, the same restaurant from Mexico City that the EPCOT dining location was based on. These days, the restaurants of the pavilion are run by the Palmas Restaurant Group, the company that also runs many of the restaurants at Coronado Springs Resort. 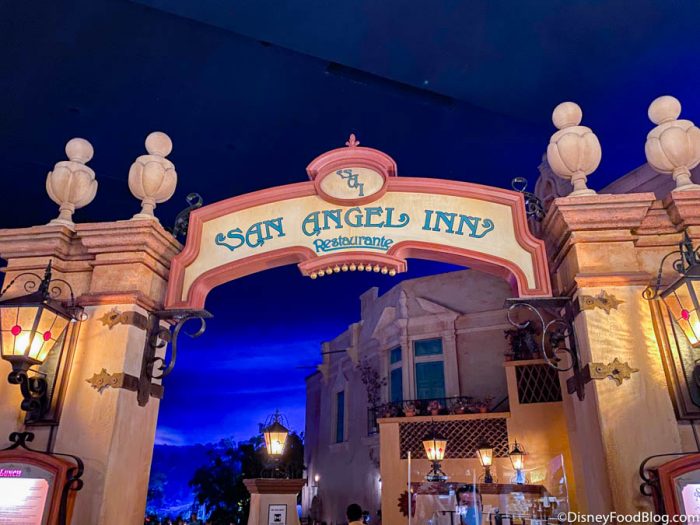 It’s modeled after the original!

Germany was sponsored by five different companies: Bahlsen, Brauerei Beck GMBH & Co., Goebel, Hutschenreuther, and Schmitt Söhne. The sponsorship could be seen in the various shops and food locations. Some of these sponsors are still present today while newer corporate sponsors have moved in as well. 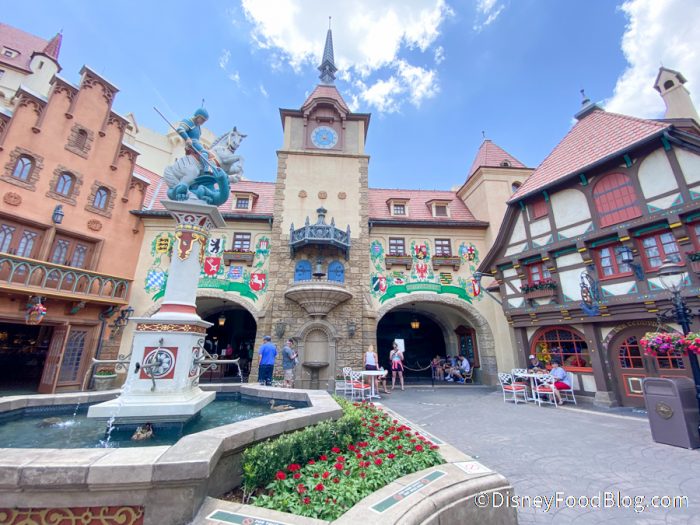 The Germany Pavilion is pretty small as well.

Italy was sponsored by Alfredo, The Original of Rome, and Brolio/Ricasoli & Bersano Wines of Italy, but since then, the Patina Restaurant Group has taken over the operation of the pavilion’s restaurants, like Tutto Italia. Some of the shops, like the Sculpture D’Arte shop, have their own unique sponsors. 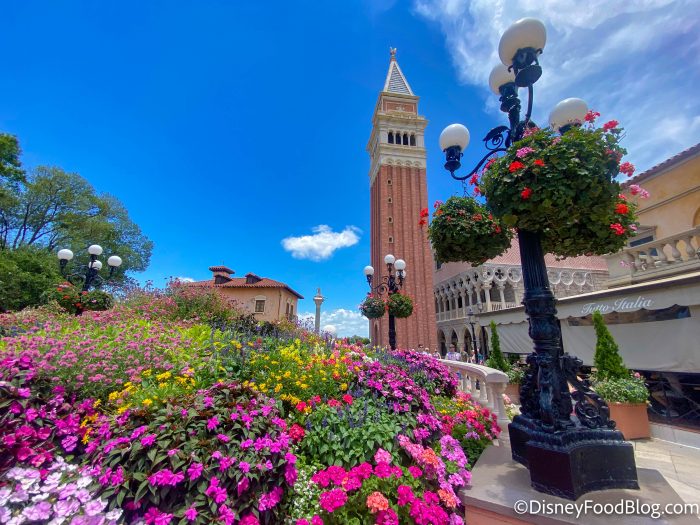 America was originally sponsored by American Express and Coca-Cola (what’s more American than that?!), but both companies have since dropped their sponsorships — although, Disney and Coca-Cola still have a partnership, meaning that you’ll find Coke products all around the parks and resorts. 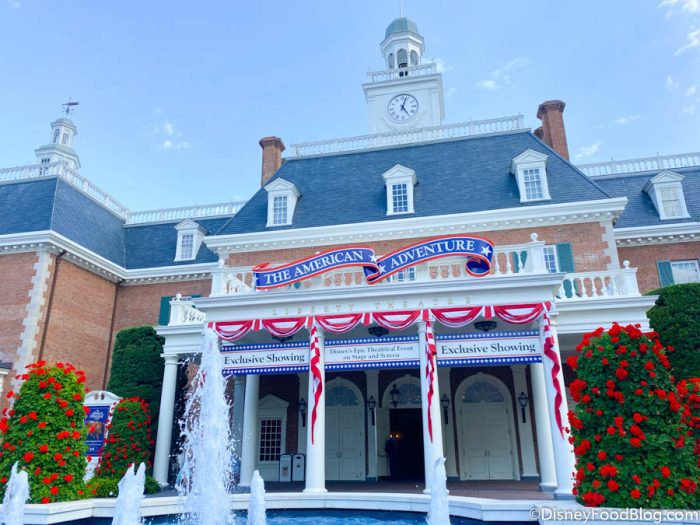 The Japan Pavilion was and is still sponsored by Mitsukoshi, Inc. Does that name sound familiar? It’s the brand of department store you find inside the pavilion — the one that’s super big and filled with all kinds of really unique merchandise. 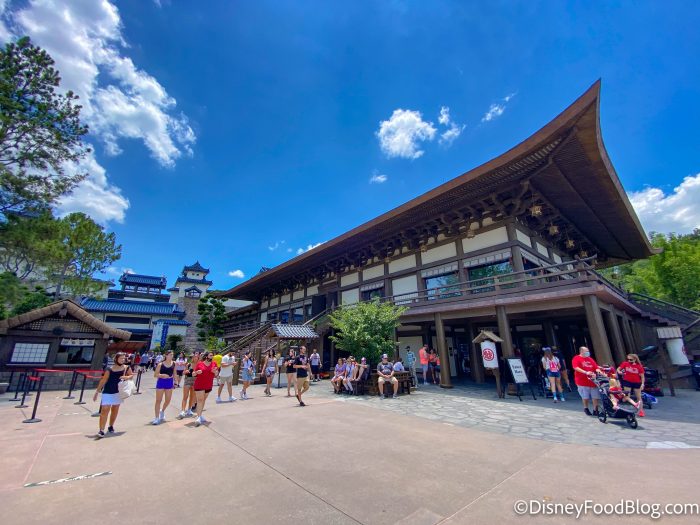 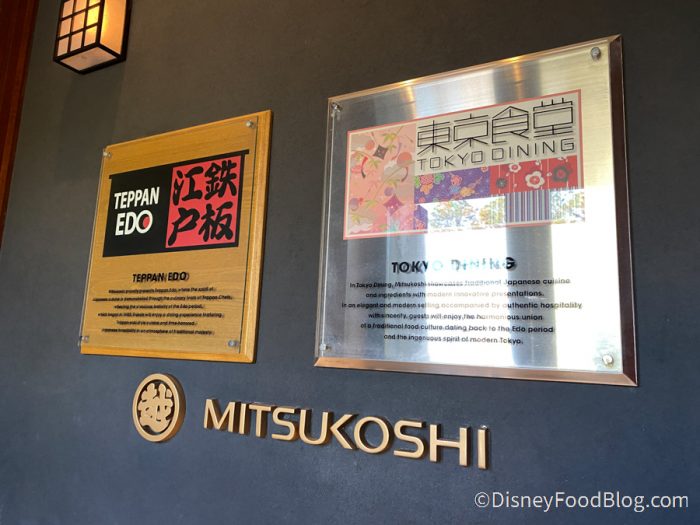 Even the chopsticks here say Mitsukoshi!

Many individuals stepped up to sponsor the France Pavilion when it first opened with the park, including Barton & Guestier (B&G), Guye Larouche, Lanson Champagne, The France Chefs (Paul Bocuse, Gaston Lenôtre, Roger Vergé, and Associate Didier Fouret). Nowadays, the restaurants are run by the Bocuse family, and they do a pretty great job! (France Pavilion food is top-notch!) Again, some smaller shops remain sponsored by smaller companies. That’s why you’ll find Guerlain and other brands prominently represented here. 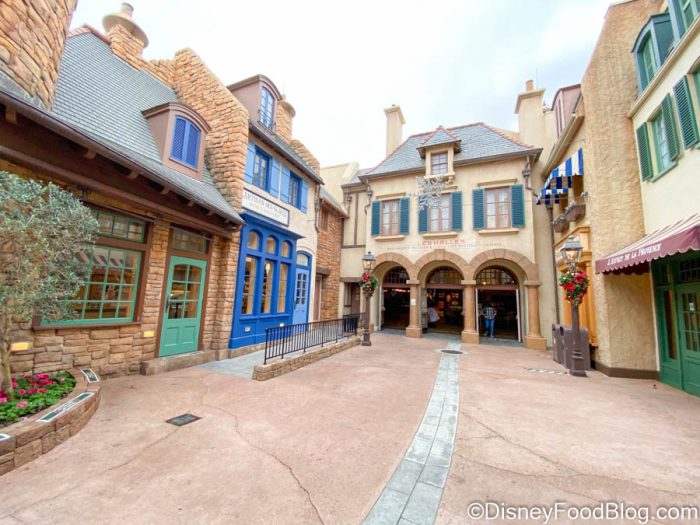 France has been well taken care of!

The UK was sponsored by Bass Export Ltd., Pringle of Scotland, and Royal Doulton. Today, Bass Brewery sponsors the food in the Pavilion, which feels right in line with the Rose and Crown Pub and Dining Room! R. Twinings & Company Limited has a prominent sponsorship here too in The Tea Caddy shop. You’ll also see their sponsorship displayed in select offerings at most EPCOT festivals. 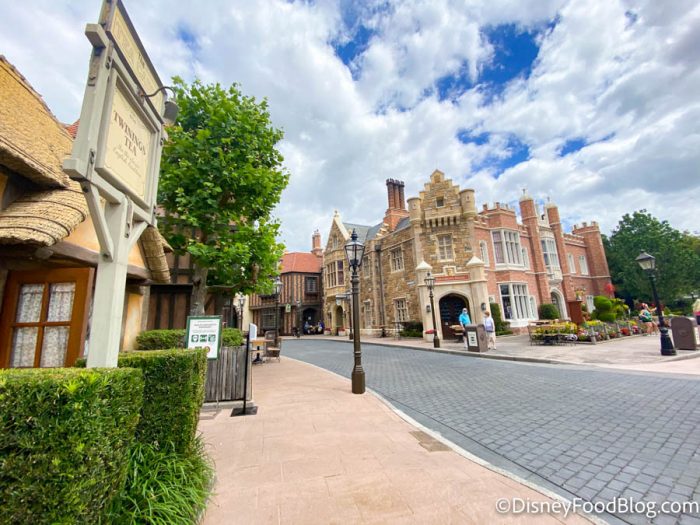 The UK Pavilion has always had a lot to offer!

But the pavilion that has had the most confusing sponsorships over the years? Norway! It was previously sponsored in part by investors from Norway and in part by Disney. The Norwegian government wanted a pavilion constructed but couldn’t fund it on their own so NorShow was formed. This was a group of 11 Norwegian companies and the Norwegian government that pooled money together to sponsor the pavilion. The companies included were Aker, Den norske Creditbank, Det Norske Veritas, Frionor, Kosmos, Norsk Data, Norway Foods, Selmer-Sande, SAS, VARD, and Vesta Group. 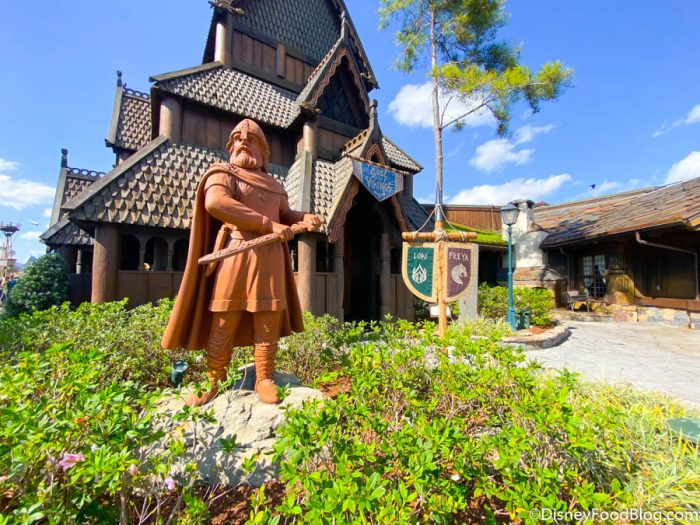 Norway has been run by a lot of different companies over the years.

If you remember the Maelstrom ride in this pavilion, it almost played like a giant travel ad to Norway — for good reason. The investors designed the attraction to encourage tourism (there was even an oil rig in the final scene to show off the oil industry in Norway!). The Norwegian government stopped supporting the pavilion in 2002. (They had been contributing $200,000 annually to help fund projects.)

So there you have it — while Disney owns the World Showcase pavilions, there have been some very helpful contributors over the years (who probably got some serious bang for their buck!). These pavilions are so incredibly detailed and thoroughly designed that it’s no wonder it takes a whole team of companies to pay for them!

Which World Showcase pavilion is your favorite?