Our favorite rat officially has his own attraction open in EPCOT! 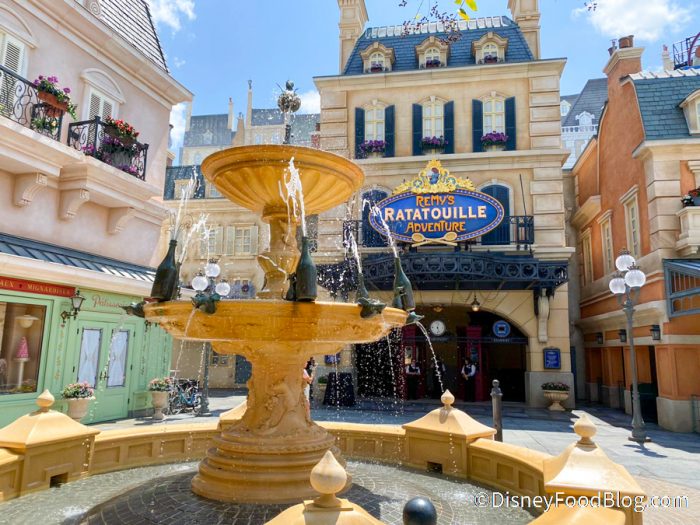 We woke up bright and early this morning and made our way over to the France pavilion in EPCOT to check out Remy’s Ratatouille Adventure on its grand opening day! We’ve already been inside this ride as part of a special media event earlier, but now it’s officially open to all guests in the park. 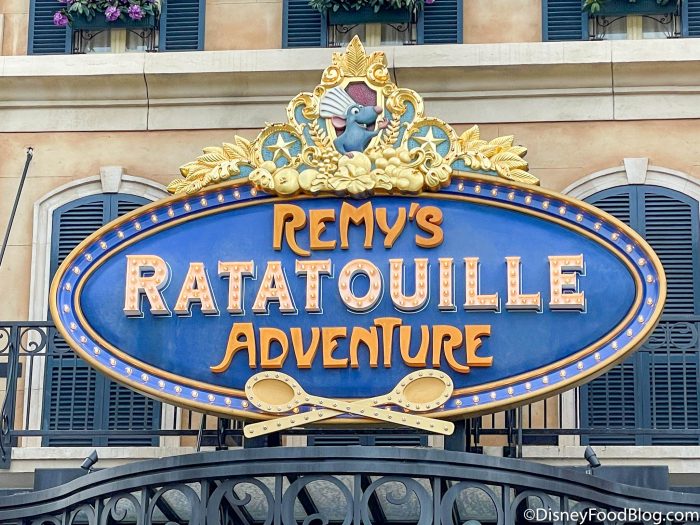 We weren’t alone at the ride’s opening — there was quite a crowd that wanted to catch a glimpse of the little chef.

Remy’s Ratatouille Adventure is using a virtual queue system, so you’ll have to be quick to grab a reservation when it opens at 7AM on the day of your visit. Another queue opens at 1PM, so you can try again if you miss it the first time! 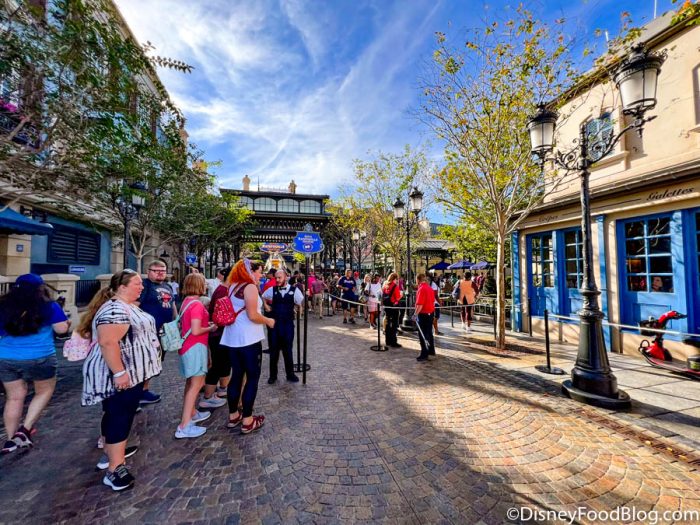 When we got here, the virtual queue was already full for the morning, and the queue (of guests who got a boarding pass) was running smoothly. 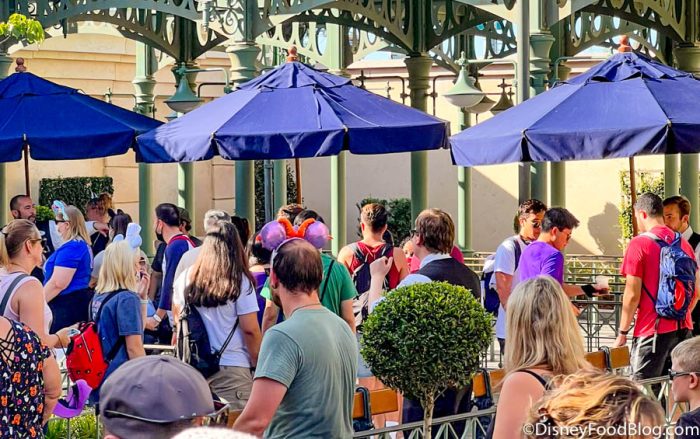 As 1PM approached, we decided to try and get a boarding group. 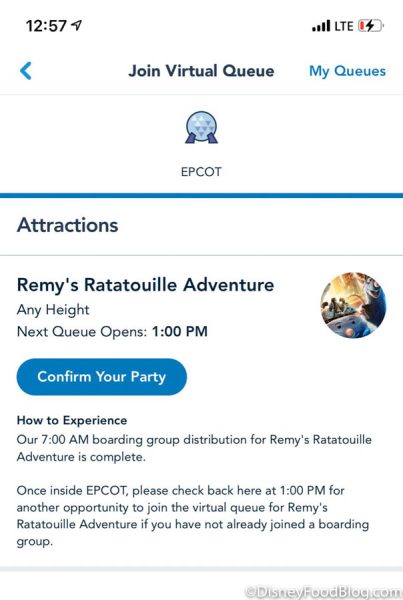 Here’s a look at the details for getting a boarding group for Remy’s Ratatouille Adventure: 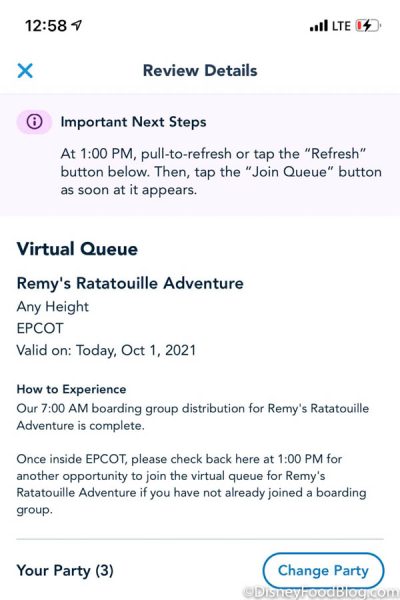 Then, 1PM hit, and thanks to our quick fingers, we got a boarding pass! We were placed in group 119 and given an estimated wait time of 165 minutes — meaning that’s how long it’s supposed to be before our group is called to get on the ride.

If you’re not familiar with the ride, it’s a replica of the same ride out at Disneyland Paris. In the attraction, riders are shrunk to rat-size and embark on a journey across Chef Gusteau’s restaurant kitchen in Paris. You’ll experience all the sights, smells, and sounds of the kitchen as you’re chased through it! 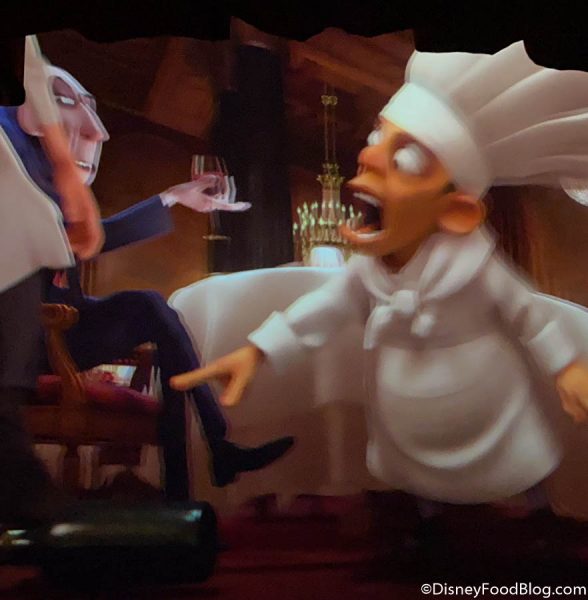 This attraction was designed specifically to match the environment of EPCOT’s France Pavilion. Instead of recreating an authentic Paris, the attraction and surrounding areas take guests to “Ratatouille’s Paris.” 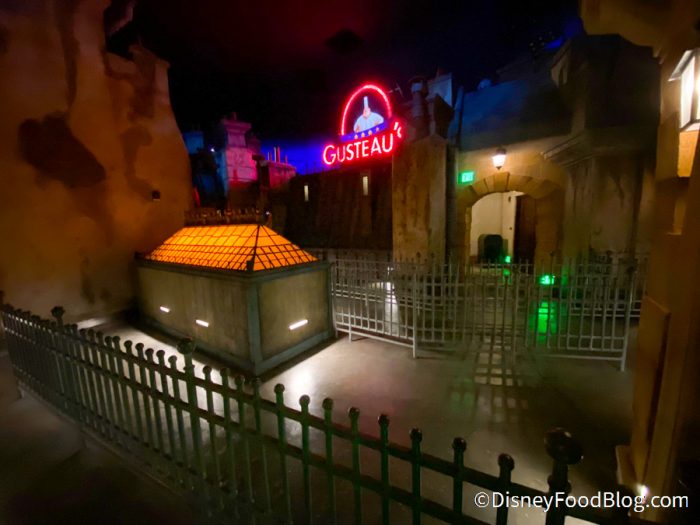 If you’re looking for this attraction, you’ll find it in a whole new area that’s been constructed in the France pavilion. You’ll find an entryway to the space on the side of the pavilion, under the Ratatouille archway. The area includes the attraction, a new crêpe spot (La Crêperie de Paris), and more! 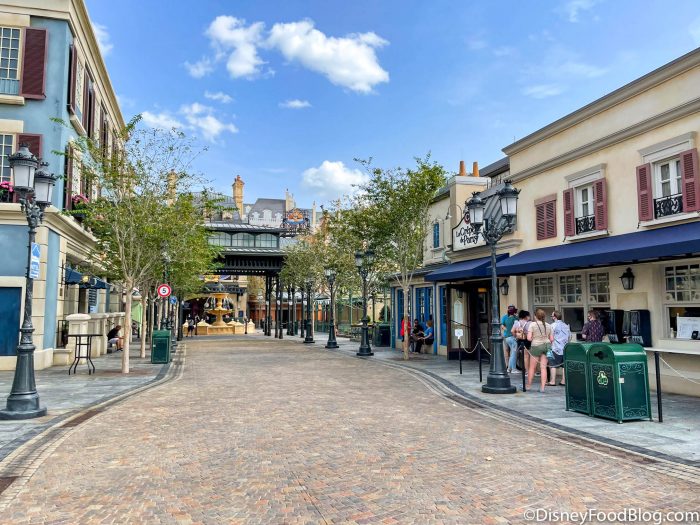 If you’re looking for some new Ratatouille merchandise, there wasn’t any in the France Pavilion when we went. Instead, you can find lots of merchandise at World Showplace, which is a space tucked between the Canada and UK pavilions in the World Showcase. 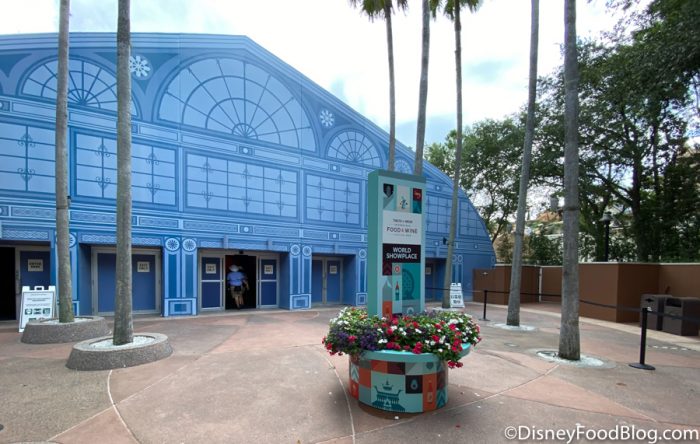 So, if you’re headed to Disney World soon, there’s some exciting, new fun to be had over at the France pavilion at Remy’s Ratatouille Adventure! More new attractions are also headed to EPCOT with the Guardians of the Galaxy coaster and other experiences as part of the EPCOT Transformation. We’ll keep bringing you all the latest news as we see more information about all the ongoing projects at EPCOT.

Can’t Make it Into EPCOT Right Now? Go INSIDE the New Ride With Us Here!

Are you excited to check out this new attraction? Let us know in the comments!